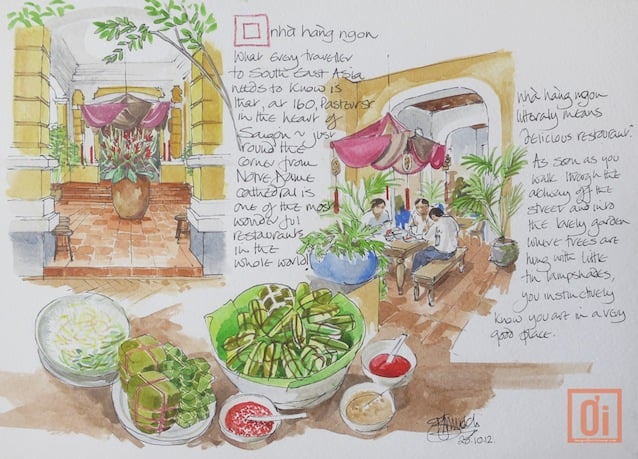 A Brush with Vietnam

In the days of Instagram, Tumblr and Twitter, where just about anyone can quickly share a photo and a few lines of laconic comments, Bridget March is keeping it old school…

On any given day, you might find a silver-haired British woman leaning against her bicycle on one of Vietnam’s back alleys, a point-and-shoot and a set of watercolors tucked into her bag, feverishly sketching in her Japanese Moleskin notebook a scene of a Chinese shopfront in Cho lon or a woman preparing jackfruit in a market in hoi An.

“I love urban landscapes, especially old architectural elements. There are so many buildings that people walk by without noticing because they’re not pagodas. But they have a lovely feeling of colonial architecture. Some of the shopfronts take you back to the merchants who built their properties along streets that used to be canals in old Saigon. From one window they could see the port and from the other window, the market. They could literally see their entire empire operating. Even now, you can see the old merchant houses between the big hotels. You can feel the history,” says Bridget. 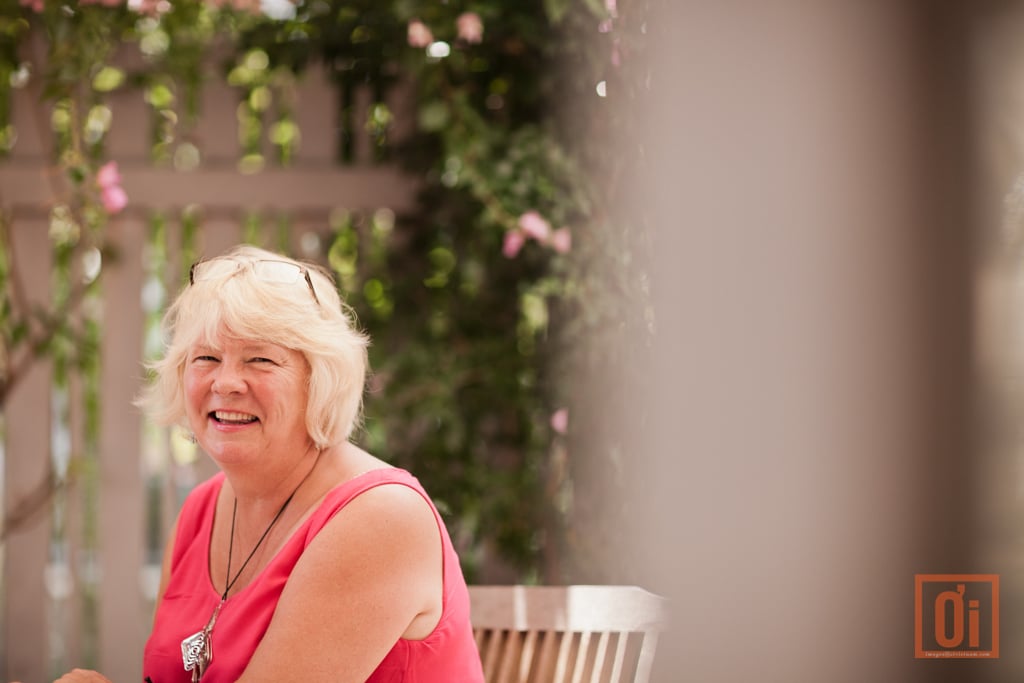 That sense of history and discovery brought Bridget to Vietnam last year, putting her houseboat up for sale and giving up a lecturing position at an independent art college in leeds. With a background in 3-D design and 20 years’ experience as a freelance product designer, Bridget’s artwork is a marriage of mechanics and creativity, seen through the details in the rows of symmetrical tiles of hoi An’s Japanese Bridge and the precise arrangement of holes in a simple basket of fish.

“Design is much different now than what it used to be. A lot is done with computers. But in the end, unless you can draw, you can’t communicate your ideas. You have to be able to sit in front of a client and sketch so they can visualize what you’re thinking. nowadays, concept drawings are so slick and realistic; it confuses clients because they think they’re looking at a finished product. But drawing clearly represents a concept.”

Bridget’s first art memory was of her engineer father. “Kids just stop everything to watch a grownup draw a cat or a dog. My father would draw horses for me. I would just be mesmerized.” Bridget also remembers an aunt who she describes as “Quite a romantic character who never married and worked in a mission in Africa. She had a lot of artistic friends and when she died, her friends created a book with their drawings and poetry. I thought that was magical. it was so intimate.”

Three years ago, she began doing the market circuit, once a month setting up a retro travel-themed stall at crafts markets and country fairs. “I’d stand there in the rain, in the snow, with my stall all laid out with a vintage suitcase and shells and bits of driftwood. I sold a lot but couldn’t make the transition of giving up the day job while still hoping to make ends meet. So you basically become a creative laborer, having to pack up a car, set up a stall, and whatever. You lose a day each time you go to market. In the Uk, you’ve got to work so hard to pay incredibly high bills. So people have to prioritize how they spend their money. As a result, the art market has died. Becoming a professional artist, stopping everything just to paint, is just not viable, unless you’re already established.”

After a trip around Vietnam and Cambodia, a friend asked why she didn’t just stay to pursue her art career here. Taking all of two days to decide, she finished out the academic year and made the permanent move last September. The last few months have been a whirlwind of travel, exploration and working with a graphic designer to turn her unique paintings and text about hoi An into a book. She also teaches a drawing class for small groups centered around the theme, “I can teach anybody to draw.”

A future project will likely feature Cho Lon. “I just love the colors that the Vietnamese use in their homes. There’s a mix of beautiful periwinkle blue, almost like in provence, with the ubiquitous pale yellow ochre and terra cotta. With the Chinese, you get these bold colors, lucky colors. What i’d like to do for Saigon is to tell the story. The average tourist coming to Vietnam wants more than they’re getting. Some of the museums are housed in fabulous buildings, but what’s inside are mainly pictures and pots in glass cases and crusty old books which no one wants to pick up,” she explains.

“My first visit to Hoi An was tailors, tailors, tailors, a boat trip and food, and sadly, the only cultural thing i remembered was the Japanese Bridge. But there’s so much history there. The average tourist will get very little information about the real hoi An and even less about Cho lon. For starters, I want to bring these places to life in pictures along with what i learned. I want to concentrate on producing exciting work for people.” 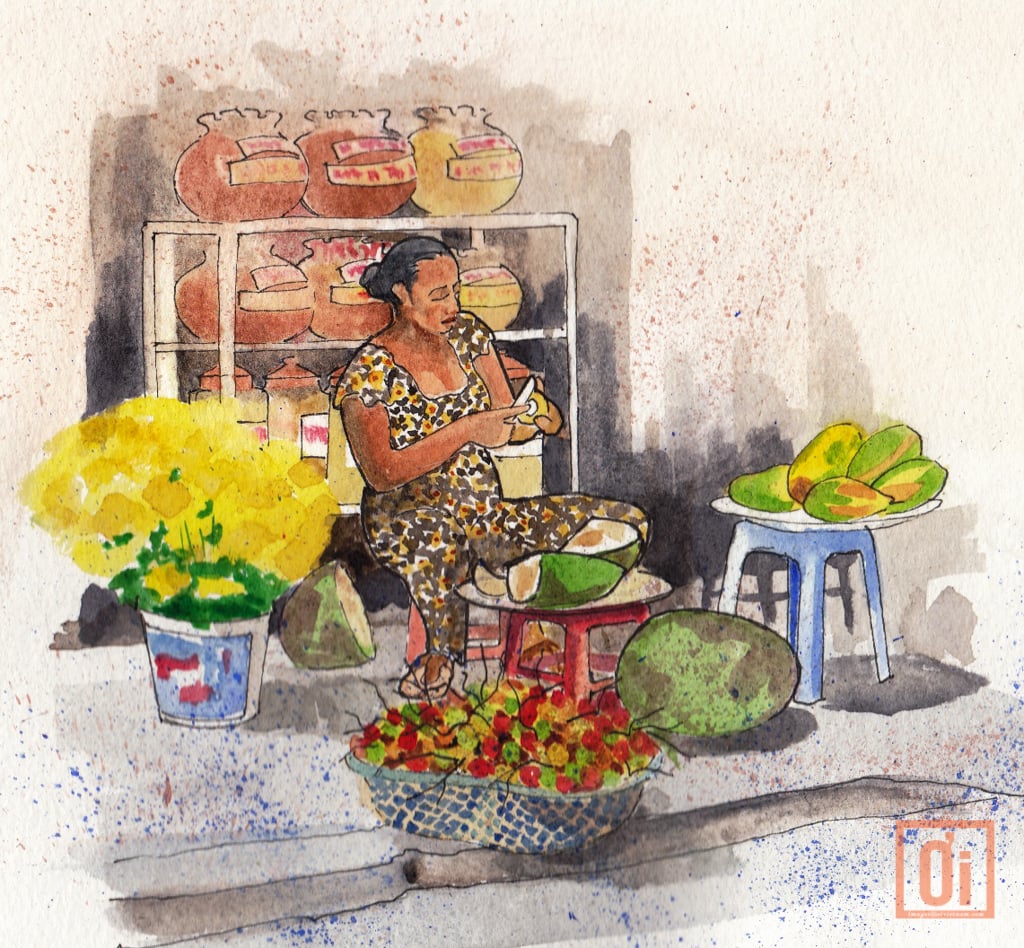 2 thoughts on “A Brush with Vietnam”