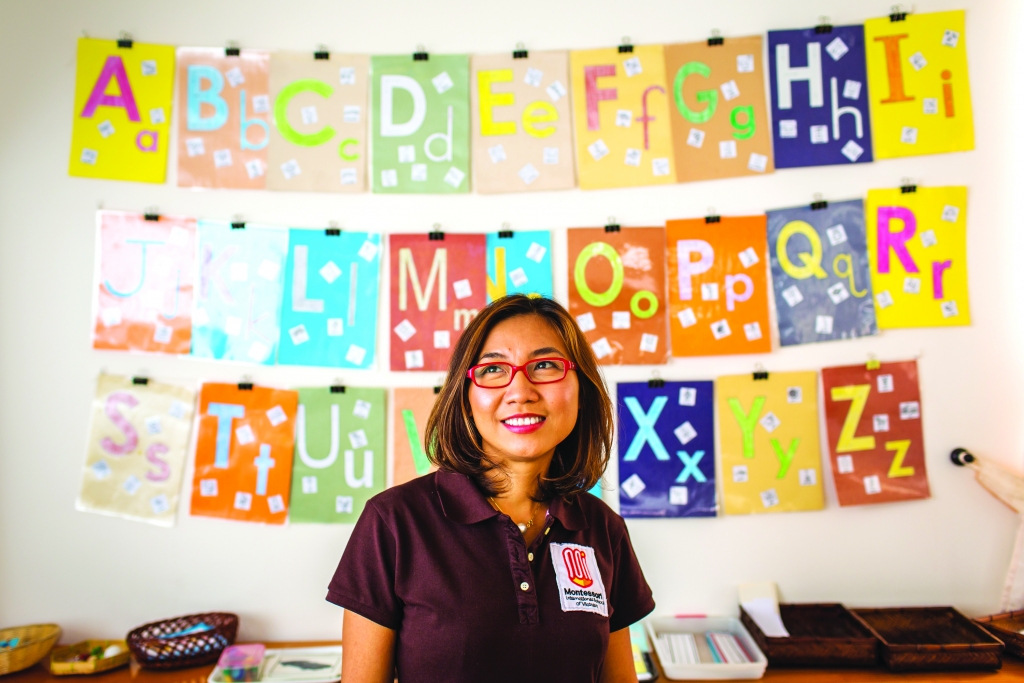 Dr. Maria Montessori felt that the goal of the educational process should not be to fill a child with facts, but rather to cultivate a child’s own natural desire to learn

Expats don’t lead the same kind of lives as other people, and that affects our parenting values too. Folks back home worry about their kids fitting in and having a chance at a normal life, while those of us who are permanent travelers are already far from being ordinary. Living in Vietnam is as inspiring as it is challenging, and if we want our kids to follow in our footsteps, then we want them to grow up confident, curious, creative, and strongly independent. It’s for this reason that Montessori-based education systems for preschoolers tend to get a lot of attention from expat parents, and this is something that professionallytrained teacher Ann Beloeuvre was quick to notice while based in Beijing, where schools offering the Montessori curriculum are popular with expats with salary packages including education allowances. Preschoolers in Montessori classes are guided to love learning rather than be instructed; the schools follow standardized methods to encourage personal development and determined self-expression, and with their internationally-focused learning environment, they aim to turn out “global citizens” – a term, perhaps, for baby expats.

It was while volunteering at her daughter’s Montessori school that Ann’s enthusiasm for the method really took off, and the experience prompted her to train as a qualified Montessori teacher and go on to open the first Montessori Summer Camp program in her native Ho Chi Minh City back in 2007. Six years on, and the school has two District 2 campuses and teaches the only fully-implemented Montessori curriculum in the city. There are other preschools here that employ Montessori techniques, but the authenticity of the full Montessori experience is something particularly important to Ann for her school. “It’s most effective when implemented fully in the right environment. Genuine Montessori classrooms are more or less the same the world over – a child can start a course in one country and finish it in another, moving seamlessly between them. The layout and system will be the same. This is extremely important for expats who want to be sure that they can change countries while their child continues in the same curriculum.”

R.E.S.P.E.C.T. “Basically, we believe that every child has a great ability to learn everything themselves. Our teachers are facilitators who help young children engage with their environment, and a child with a proper guide can learn almost independently,” continues Ann. “Montessori teachers are trained not to preach or to pressure the kids – so with the right direction, each child can reach their own potential. All this is implemented from simple, basic activities inside the classroom.” In each of the school’s teaching rooms, for example, there’s only one set of each of the activity materials on the shelf. “The kids have to respect others and take turns. If one child sees someone else playing with something they want, they learn to ask for it, and to accept it if they’re given a refusal. This same quality is fostered between all the children, regardless of nationality.” While a few local students are enrolled, the school predominantly admits expats. “With the method’s international mindset, of course we serve the international community,” says Ann. “Classes are taught in English, while the students are introduced to French and Mandarin Chinese. But the materials can be used in any culture and language.”

The school has a program in Vietnamese, but it’s not fully-implemented yet – she intends to expand into the local Vietnamese market in the near future. “I’m keen on connecting with local schools to establish a program. Our current local course uses a child-centered approach, without blackboards or a teacher-centric focus. It’s something Vietnamese kids need to experience too.” Ann has seen school numbers grow steadily during its six years in operation, but the Montessori curriculum is still far less center-stage in expat circles than it is in other cities, like Beijing. Still, the results have been pleasing. “The real measure of our success lies in the fact that every single foreign parent who has sent their child to our school continues to pursue a Montessori-style education when they return home. That tells me that they’re happy with how their kids have progressed with us.”

Integral Calculus: An important concept for the students with an engineering background

Calculus is one of the ancient and most widely used branches of mathematics, this branch is widely used and taught to students who have a high interest in mathematics and want to pursue their career in this field. It is one of the vital topics to be known for engineering. The concept of this topic