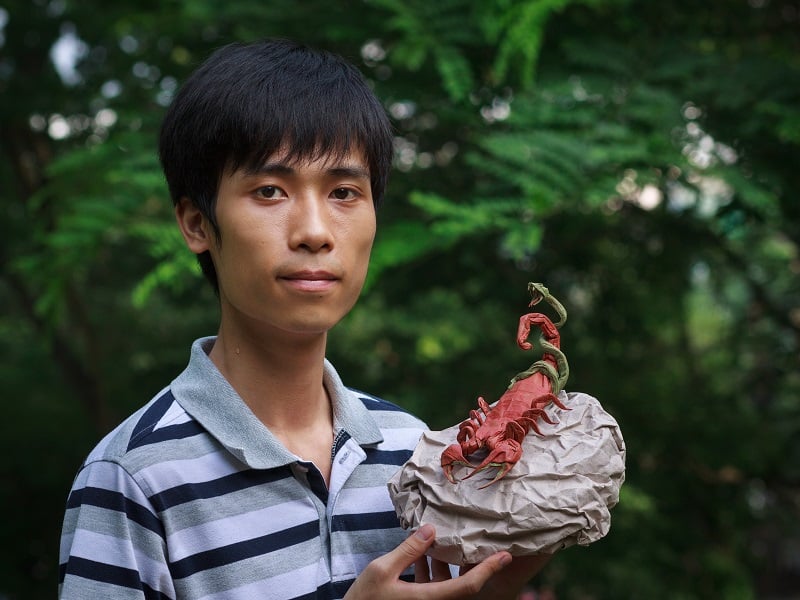 Ancient Japanese legend has it that anyone with the devotion and patience needed to fold 1,000 paper cranes will please the gods thereby earning one wish.

If that’s true, Nguyen Hung Cuong has a few wishes coming his way for his unique 21st century take on the 2,000-year-old art of traditional origami.

A post-graduate student studying Electronics and Telecommunications at the Hanoi University of Science and Technology, Cuong’s labor-intensive creations gained international attention recently, being featured on several art blogs and on Huffington Post, where one commenter noted that “it’s not just the great artistry but the fact that he has to visualize so many steps and dimensions ahead. It makes my head spin.”

Now 24, Cuong has been folding paper  since he was six as part of his school’s arts and crafts lessons. “I didn’t even know that it was called origami until I was about seven or eight when my parents bought me a book about it. My [older] sister did it with me when she was younger, but in my family, I’m the only one with a passion for it.” 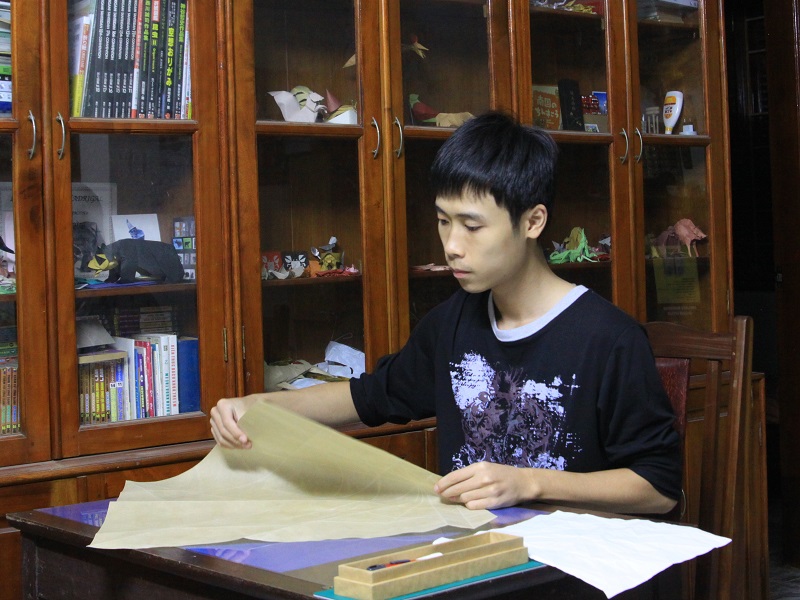 When his parents saw that he could fold everything in the book, they bought him more books and took him to buy origami paper. He then started experimenting with creating his own designs, eschewing the ones taught at school as too simplistic.

The cabinets in his small room are now full of his designs, everything from tiny, intricate horses in motion folded from a single Vietnamese banknote to a great white shark, mouth agape, perched atop a swirling blue wave.

Origami is traditionally two-dimensional, highlighted by precise folds and straight edges. Modern-day origami has incorporated the use of curves and crimps with some artists adding twists like creating abstract 3-D sculptures or spheres, in addition to modular origami, the art of using many sheets of paper to create larger, more complex designs.

Cuong’s origami is surprisingly lifelike, as opposed to the traditional, stylistic variety (think paper cranes). It all begins with an idea. “For some, origami is a means of relaxation. For me, the joy is in the process of thinking up an idea and then figuring out how to execute it. I’m engrossed by it even though it can sometimes give me a headache. You always have to think many steps ahead, analyzing whether making a crease here or there is going to show on the final product. For instance, to create the shark, I had to work out how to make everything from the fins to the teeth to how to make the eyes stand out. Then it’s on to experimenting, using dozens of practice sheets and trying something hundreds of times to get each individual technique right. Before I started, I thought the most challenging part would be the head because it was the most detailed and I wanted to make it look realistic and wild but afterwards, it was actually getting the proportions of the body and tail just so that was most difficult.”

Another one of his favorite pieces is the gorilla which he recently redesigned four years after the original. “I love it not just for its features but the way I’ve been able to capture its posture and teeth-baring ferocity. It’s not just pretty to look at but the process was enjoyable. I could fold and refold it many times without getting tired of it.” 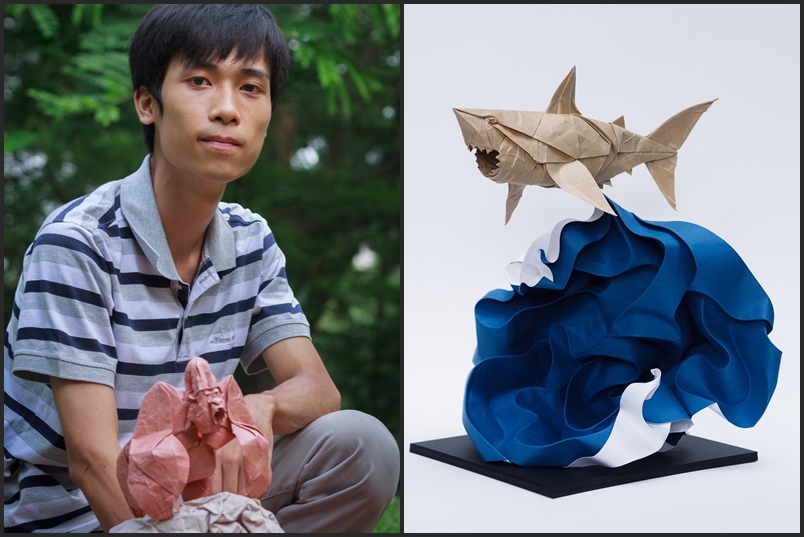 Cuong uses large single sheets of Vietnamese tree bark paper known as giay do, similar to Japanese washi, for his work, sometimes adding a layer of glue for stability. For more structural pieces, like the wave beneath the shark, he used thick watercolor paper with a layer colored paper. “The materials for the shark and wave only cost about VND60,000 but it took about 35 hours to create.”

Is monetizing his work in the cards? “I’m not really interested in selling my work because there’s not much of a market for it,” he says. “On the other hand, some people want to buy my work for cheap. They don’t realize how much time goes into each creation. Sometimes my friends and neighbors will ask me to make things for them but I don’t do it often because I only give away really nice ones. It’s also hard to mass create these. Even after figuring out how to do something, like with the shark, it’s not necessarily easier to make the second time. It’s still more art than science.”