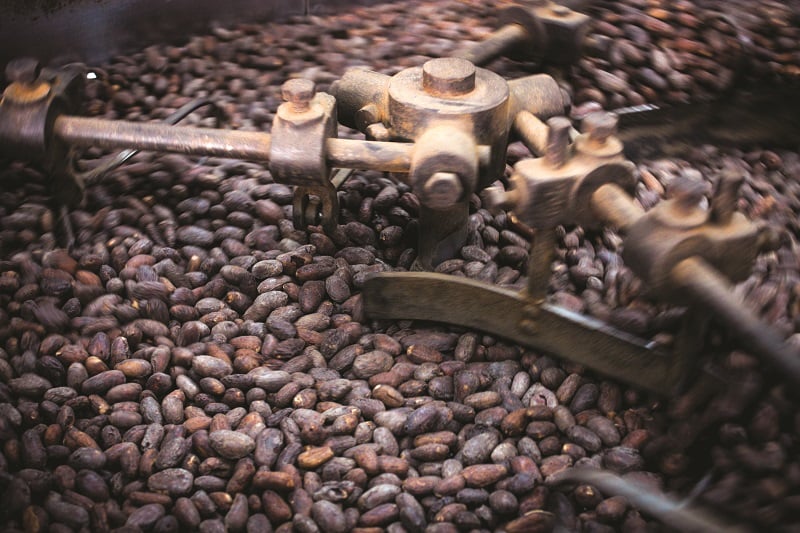 The rich history of Vietnamese chocolate

In its 4,000 year history, it’s been used as currency and tribute. It’s been drunk as an alcoholic beverage and a bitter foamy elixir in gold cups by Mayan elites. It’s been presented as an offering at the funerals of noblemen and played a part in ancient New World religious rituals. It’s spawned saints and gods. It is the divine cocoa.

Originating in the steamy, leafy jungles of the Amazon, chocolate was first known as chikolatl, an Aztec word meaning “bitter water” or, some say, “beaten water,” possibly pointing to its original drink of cocoa paste mixed with spices and vanilla, poured from on high to create a frothy cup of pure deliciousness.

Only after Spanish invaders brought the bitter concoction back to the Spanish court where sugar was added to better suit Western palates, did its seductive sweetness enthrall Europe and the rest of the world. In the 18th century, Swedish botanist Carl Linnaeus assigned it its scientific name, Theobroma cacao, meaning “Food of the Gods,” and the rest, as they say, is history.

Now a USD74 billion dollar worldwide industry, four of the five leading cocoa producing countries are in Africa accounting for almost 70 percent of the world’s production. Asia is represented in the top eight countries by Indonesia and Malaysia. 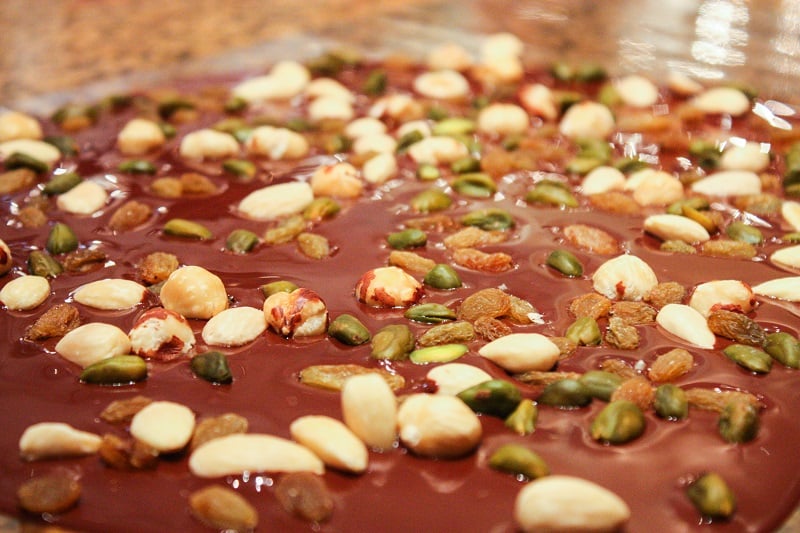 Unfortunately for local chocophiles, two words that don’t seem to go together are “Vietnam” and “chocolate.” Until recently, that pairing may have conjured up the thought of cheap, almost inedible, bite-sized squares of pure sugar, marketed for the masses who even then couldn’t be bothered with locally made inferior-quality chocolate. Surprisingly, though, cocoa, or cacao as it’s more commonly called here, has a long history in Vietnam, stretching back as early as 1890 when records indicate the French had been encouraging local farmers to grow the product. However, any real signs of success would have to wait almost 100 years.

In 1997, the World Cocoa Foundation started the Cocoa Project in Vietnam with its ideal combination of heat and humidity, promoting cocoa among smallholder farmers by means of research, demonstration plots and technical assistance. In the following years, organizations from USAID to the World Wildlife Fund pitched in. This in turn has filtered down to small scale farmers in the form of government subsidies such as technical support, a daily growing schedule, free or subsidized saplings, free fertilizer, and regular seminars, all expected to last until 2020.

One of the recipients of the cacao projects is Thanh, a local farmer in the Mekong Delta. “It’s not difficult to grow and we can sell it back to the government and to our customers in other provinces,” he says of the thousands of saplings growing under a canopy of netting in front of his home. At his 3,000sqm seedling farm where he’s been cultivating cacao for over 10 years, he turns out 200,000-300,000 cacao seedlings per year, with the majority being sold to the government under various subsidized projects. 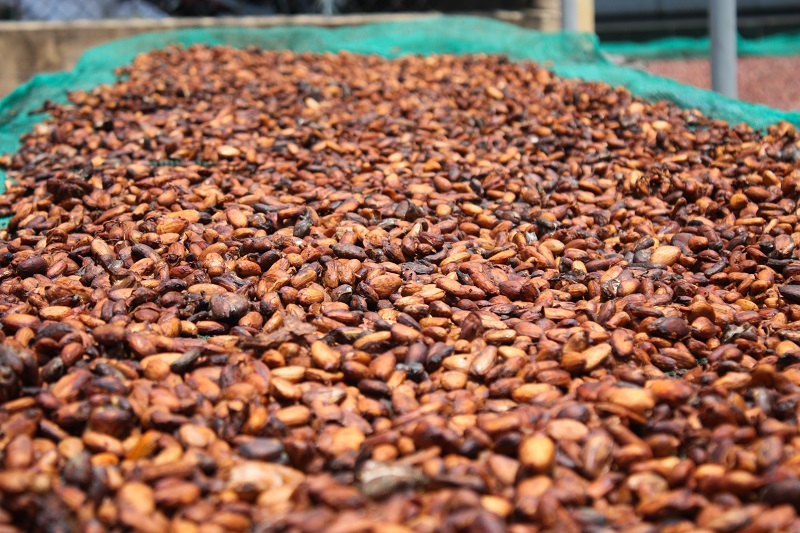 Cacao Mecca
Seventy kilometers south of Saigon along the new expressway, past the stalled construction of Happyland and the area of My Tho, home of the Coconut Monk (who according to local legend did not need to eat anything after eating nothing but coconuts for three years), lies Ben Tre, a province famous for its coconut production. Stalls line the road selling coconut candy and kitschy everything-coconut souvenirs. However, in recent years, Ben Tre has proven ideal for cacao as well, a crop that the government began to encourage 15 years ago, when the price of coconuts plummeted to VND500 per fruit. It is now the most productive of more than a dozen provinces in central and southern Vietnam to cultivate cacao. 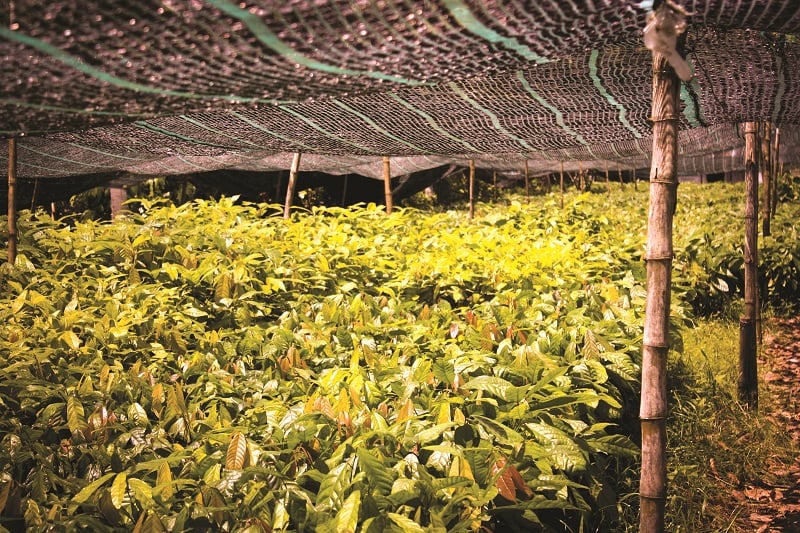 “Planting cacao here is ideal because when the plants are young, they need shade,” says Anh of Puratos Grand Place, a Belgian joint venture providing industrial-sized bars of chocolate to businesses. “The saplings can be intercropped, or planted under the shade of larger trees like coconuts or cashews or mangoes. Cacao trees can also live to be 40 years old and productivity increases with age. Also, while every part of the coconut palm can be used, the government is supporting a move away from them because local people burn the coconut shells to make charcoal, but this burning process produces carcinogenic smoke as a by-product.”

Vietnam strictly grows the Trinitario variety of cacao, and like wines, coffees and teas, the soil plays a large role in the final taste of the beans. Vietnam’s chocolate has been described as more fruity, with sweet and sour notes, compared to African-grown cacao. 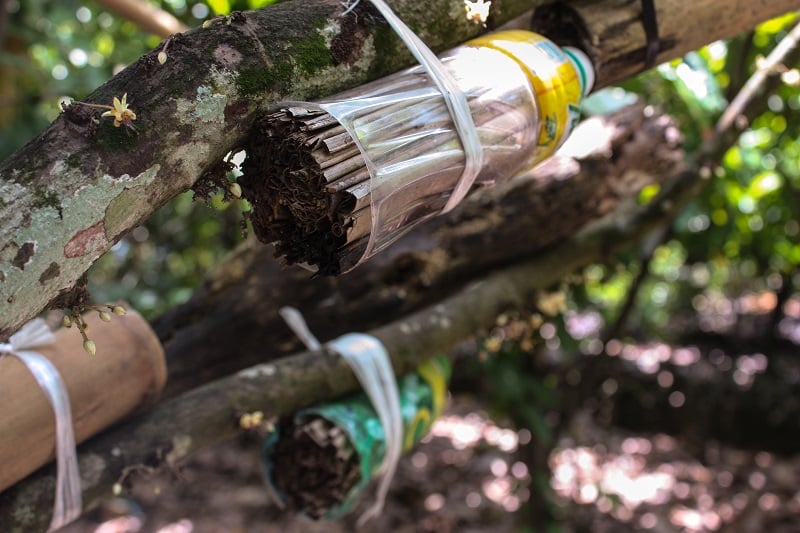 “From flower to fruit takes about 100 days,” explains Vincent Marou, co-owner of Marou Chocolate, artisanal chocolate makers. “The tree produces fruit year round. It’s good for Vietnamese farmers because they typically don’t have much land. A mix of crops can be grown together.”

The ripe fruit has a peculiar oval shape in varying shades of green, yellow and red, but it’s the creamy white flesh that’s most surprising, looking and tasting much like soursop. In fact, staff of the Puratos Grand Place processing center can sometimes make deliciously sweet cacao juice and even dessert wine from the fresh pulp. 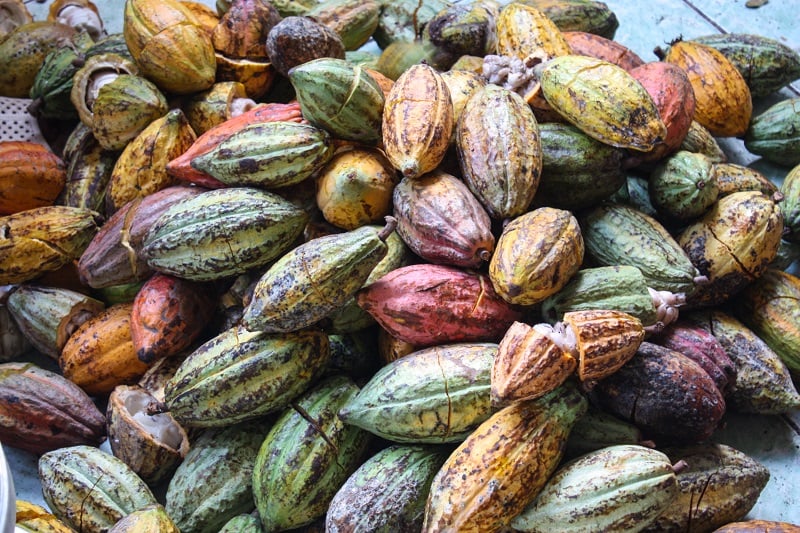 More commonly, though, the fruit is heaped into large wooden vats for fermentation. “This is the most important step,” says Vincent. “A chemical transformation takes place. This brings out the very best flavors, the body and richness of the cacao.” It is also during this process that the fruity undertones of the pulp are infused into the beans. 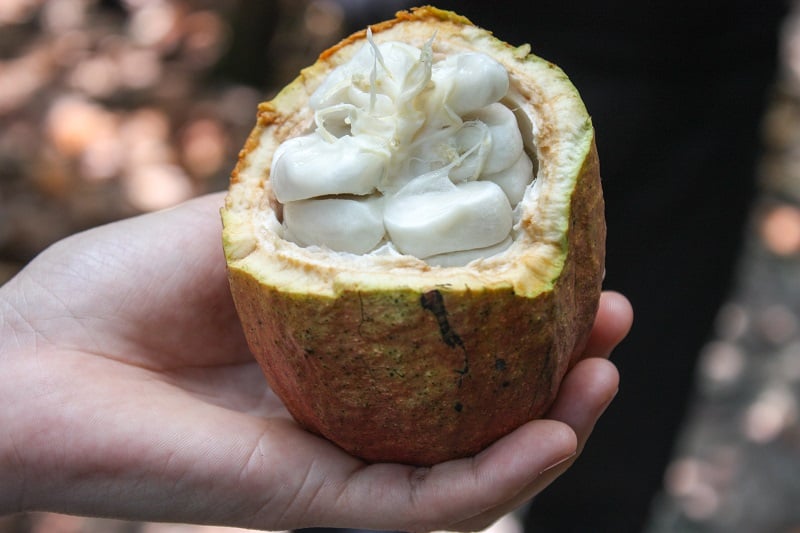 The beans are then constantly raked and completely sundried, before going into a coffee roaster at the Marou factory in Binh Duong to develop their chocolate factor. Grinding the essence of the cocoa bean produces a chocolate liquor where cocoa solids and butter are released. From there, sugar, vanilla and milk are added to create the familiar bars of chocolate. 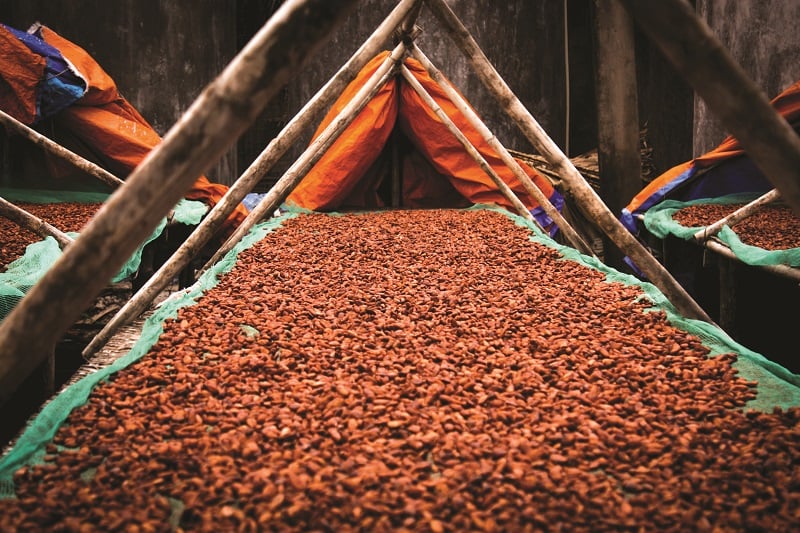 However, growing the cacao and producing the chocolate is only half the battle. “Vietnamese in general don’t have an educated chocolate palate, preferring the cheaper compound which is mainly used for decorating cakes,” says Anh whose clients are mainly bakeries, hotels and restaurants. “We’ve had to really promote the use of couverture (higher quality chocolate) by going into the bakeries and showing them how to use it. Before, cakes were mainly decorated with frosting and the final product depended on the skill of the decorator. We introduced the bakeries to molds and showed them how they could get the same great results every time using chocolate instead of frosting.” 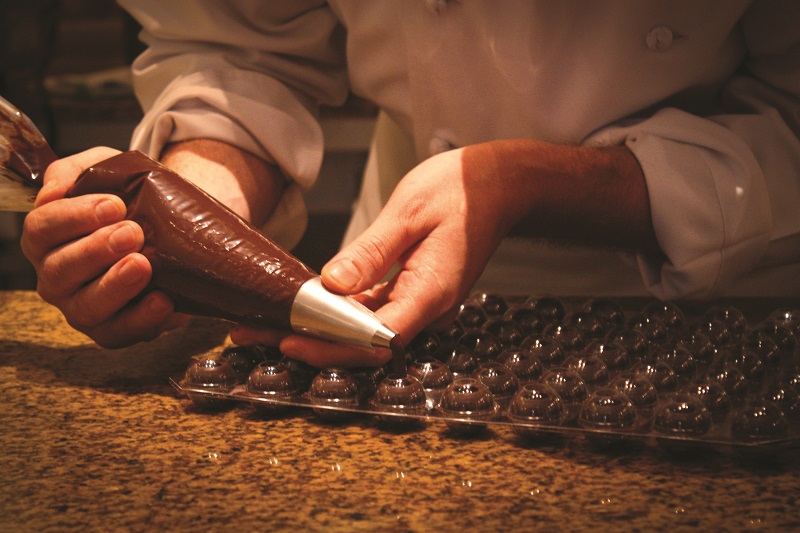 Back in the kitchens of the Park Hyatt Saigon, Pastry Chef Bertrand Sommereux is busy using Vietnamese chocolate to produce dark chocolate coffee truffles and chocolate fondant with Phan Thiet vanilla. “I have traveled extensively and I like to work with local products. Not only is it cheaper, less tax, but we’re really lucky to be in Vietnam because we have good chocolate, excellent coffee and fragrant vanilla beans. It’s very nice for one country to have such a variety of good products.”

A chocolate master class with Park Hyatt Saigon’s Chef Sommereux can be arranged with two days’ notice. For more information, email [email protected]. The Marou Chocolate factory can be visited on the Binh Duong tour operated by www.exotissimo.com.