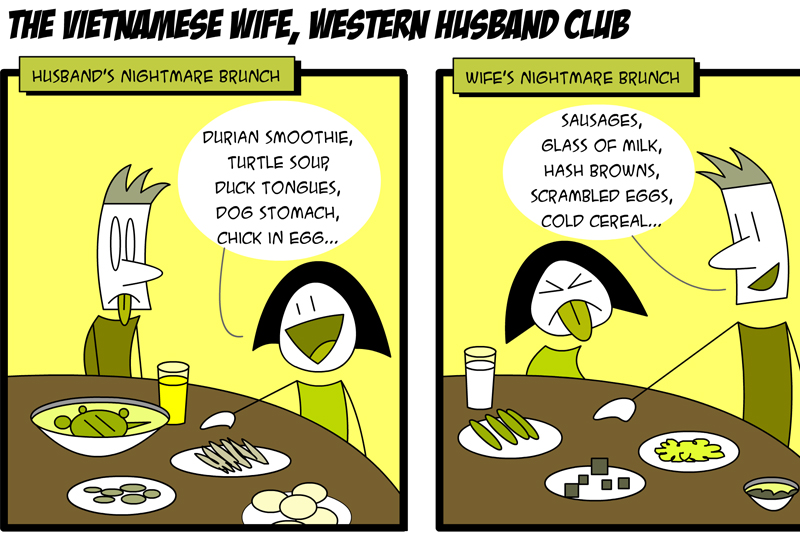 A humorous look at the highs and lows of a multicultural marriage.

Marriage is hard. Add to that the strains of a different language, culture and family values, and it becomes downright imposing. Sometimes you don’t know whether to laugh or cry.

One man who has firmly chosen to laugh is cartoonist David Perry, who has found a catharsis of sorts through his humorous, often self-deprecating comics detailing the highs and lows of a multicultural marriage with his wife, Jenny, in his recently self- published book, Vietnamese Wife, Western Husband Club. A man of diverse interests, when he’s not drawing, David can be found conducting training for the New York City Department of Parks and Recreation or leading Audubon Society family birding walks on Sundays. 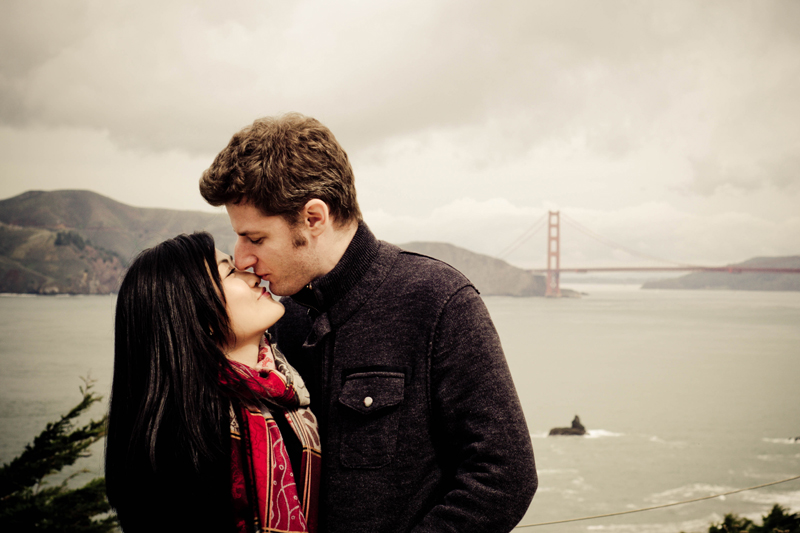 How did you get into cartooning?

DP: As a kid, I was always drawn to birdwatching and drawing. I was always torn between those two. They’re not exactly opposites but different enough that pursuing one would mean neglecting the other. The state school I went to didn’t have a great art program so I got a degree in Ecology and Evolution. But it was too much science, so when I needed a break from school, I started doing my own comic books. I see things in my head as animated cartoons, so I became an intern at an animation studio, doing it the old fashioned way with a whole lot of drawings. The whole industry started to tank, which kind of left me with not a whole lot. But as soon as Jenny was in my life, it was natural for me to start cartooning about.

Your book is refreshingly honest in many ways, including Jenny’s description of the first time you met face to face, where she writes, “he looked better in his photos and for some reason I though he was tall.” How did you two meet?

DP: I loved her when I first saw a photo of her. Literally. That was way back, after I had taken a tour to Vietnam with my family. I was trying to find my tour guide’s contact info and ended up being put in contact with Jenny [who was working for a travel company in Vietnam]. She said, “Hey, I’m coming to New York. Is there anything I should go see while I’m there?” and we started to hang out [online]. “Oh, just so you know what I look like”, she sent me a gorgeous picture and we started Skyping. Jenny thought I was really photogenic, but at the airport, I’m like: “WOW, there she is!” And she’s like: “Oh boy, this guy’s not my type.” [laughs]

In the preface, you wife says you must have been Vietnamese in a previous life. What do you say to that?

DP: Most Americans are really tall. I’m like the perfect body plan of a Vietnamese guy. I’m 5’8″ and kind of on the skinny side. When I went [to Vietnam] to live with Jenny and her parents, I just really seemed to fit in… just like part of the family. Also, I’m really not a typical American at all, I’m more laid back, not your typical New Yorker. I love Asian food. Most Americans can’t even eat a whole fish; they have to have everything processed. 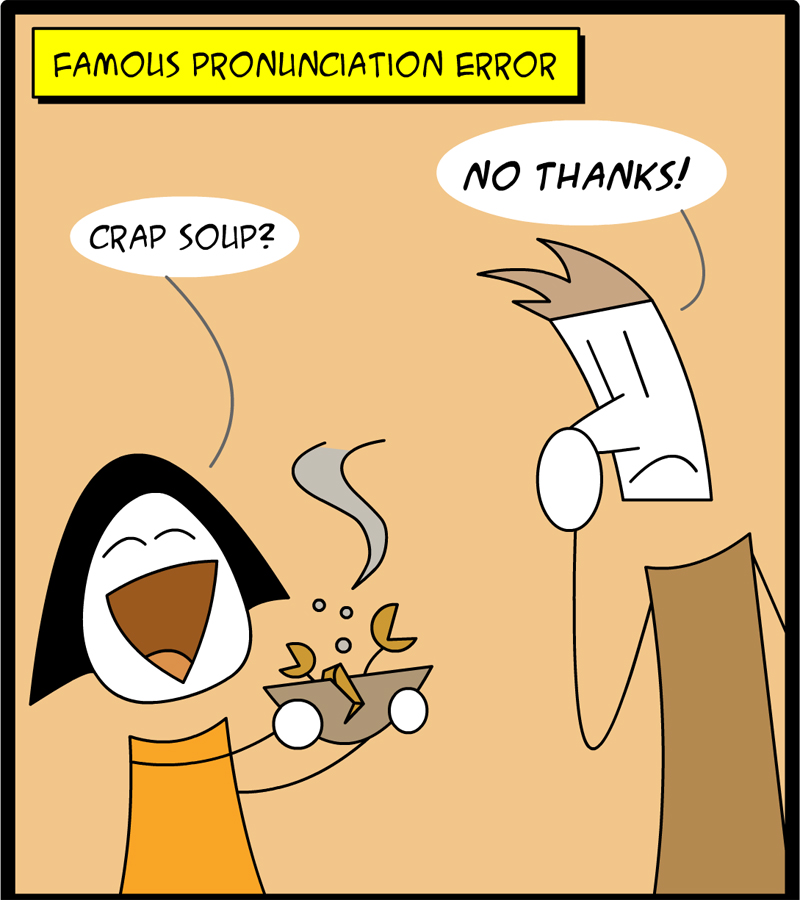 After living in Vietnam for a time, you both moved back to the US. Is that when the idea for the book originated?

DP: When I was in Vietnam, there were some online forums that were really popular with Vietnamese girls, but basically it was a Vietnamese wife/ Western husband club. I think the girls just needed an excuse to hang out together at a restaurant and I think they kind of assumed that if they brought their husbands along, we would have just as much fun as they were having. The women went crazy, having so much in common, but the men were so different. If we had any other choice, we wouldn’t be hanging out together. It was a case of someone thinking you have “yellow fever” and I’m thinking they have “yellow fever.” [laughs]

We were all so different that for the most part it was largely awkward. But the one thing we could talk about was our wives. Once I brought it up, everyone else said, “Oh my God! My wife is exactly the same way!”

In the US, [at similar couples get-togethers], I started bringing my sketch book. I’d talk about certain situations with Jenny, confirming whether this was happening to someone else and every time, it was exactly the same story ― the way Westerners were trying to comprehend something, having the same reactions. There seems to be a lot of truth behind the comics – some yelling, some crying, some frustration, maybe….is it cathartic for you to be able to convey that?

[Jenny pipes in.] He exaggerates a lot. It’s not all real.

[Back to David.] I try to show in my cartoons that there’s always love no matter what. Yes, we’re frustrated, we have misunderstandings, but there’s always a lot of love in the room.

Like Jenny’s iPhone has become its own character. It’s not really a Vietnamese thing; it’s a couples thing. But there are some things that Jenny kind of makes her own. You’re not meant to text someone for four hours straight!

The book incorporates some funny web translation. Why did you choose to do that?

DP: It’s to make it funny but it’s also another truth. [Vietnamese wives] are always on Facebook and forums, and we have no idea what’s going on. Every guy is going to go to Facebook and use its translation feature. Why is she getting so many likes? Is she talking about me? A lot of these translations are just hilarious by their own right. 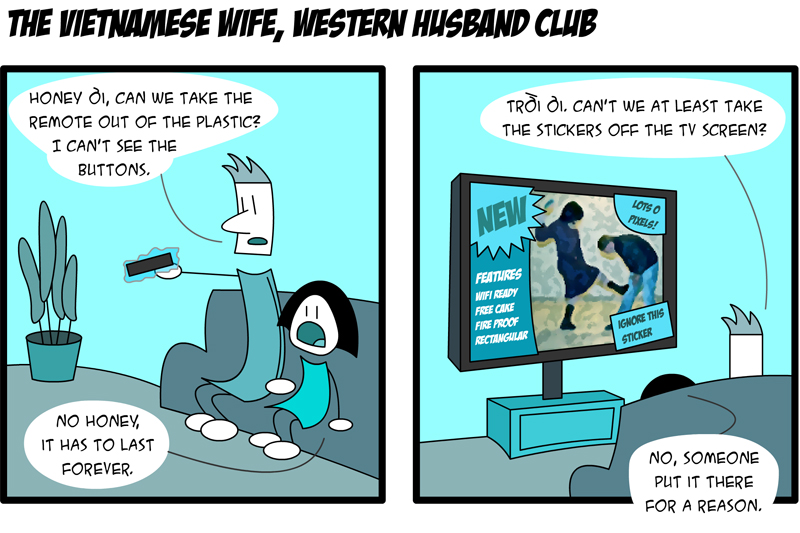 Was there any consideration to maybe leaving certain topics out because it mat make someone look bad? Or denote it’s not a perfect marriage?

DP: Not really. I try to have it even ― what Vietnamese do when they’re in the US and what expats do when they’re in Vietnam. The wives actually seem to like it more, spreading this stuff around. It seems that when they see [comics of] Jenny, they’re like: “I get it. I’m totally like that.”

There are also some men/women stereotypes in Vietnam. Vietnamese women have a reputation as being the perfect wife, and husbands don’t do anything. Now that things are modernizing, the roles switching ― sometimes they’re even, sometimes reversed. Jenny saw her own parents ― her mother working so hard, her father, and I love the guy, but he does a lot of lounging… 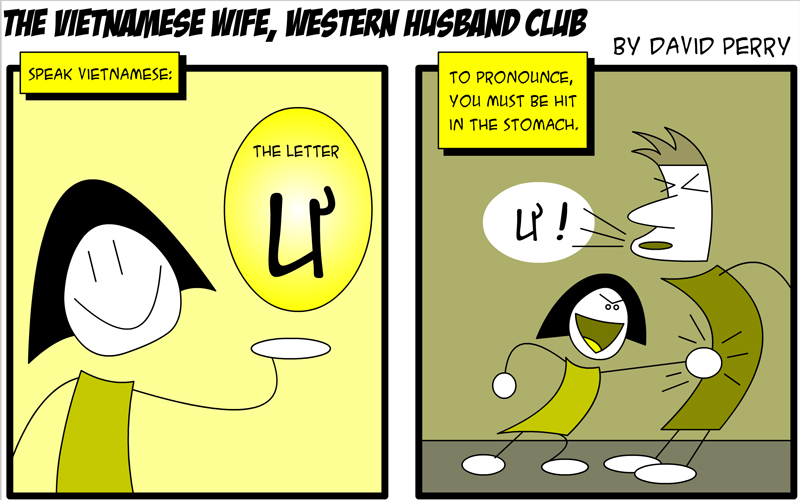 With a title like “The Vietnamese Wife, Western Husband Club,” do you feel the book may be too niched?

DP: I think that people from Vietnam relate to it more. It’s really not a Western genre at all. Most Westerners who have no association with Asian culture at all, which is most, won’t even get it. Americans are set in their ways that their culture is the right way and everyone else is kind of stupid. So you have to be well-traveled enough to get it. I use some mixed Vietnamese language and a bit of introduction to Vietnamese in the book. [Oi: There are additional comments in the book to provide context for those who may not understand a comic.]

It’s a narrow niche, but people within that niche really love it. Jenny is really popular and has a lot of friends/followers. I’d work hard on something and have like two people see my video, meanwhile she’d change her profile pic and hundreds of people would comment on her new haircut. So she’s been a really good source for a fan base. Also, since posting a cartoon on the “Another Side of Vietnam” Facebook page, my blog popularity has grown at least 10 times.

Do you have any plans for more books?

DP: Since I have a lot of fans now in Vietnam and a lot of people who want to have a translation, I’m thinking of going back to Vietnam and getting a publisher, and starting a new book with more cartoons and comments in Vietnamese.

For more on David and his cartoons, visit www.vwwhc.blogspot.com. David’s book, The Vietnamese Wife, Western Husband Club: A Romantic Cartoon is available on Amazon.