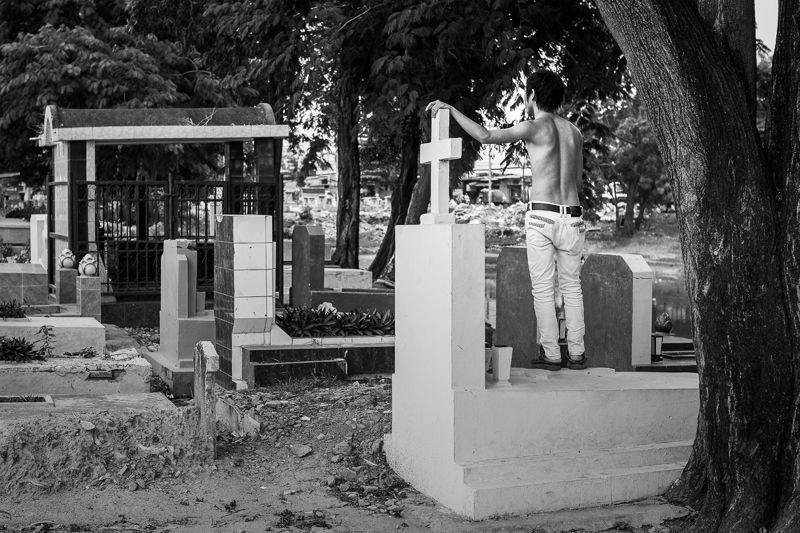 …a bone cleaner, exhuming corpses to make room for farming.

Hello everyone, my name’s Thanh and I’m 55- years-old. I live in Xuan Canh Village in Tu Liem District. I’m semi-retired now; used to work in construction. But that’s just one of my jobs [smiles]. On the other hand, I’m still doing another job that’s not like any other. I’m a bone cleaner. If I had to, I’d put it that way. I’m not really one of those professionals like at Van Dien or the other cemeteries. I mainly exhume for relatives, neighbors, or other acquaintances who need my help.

I know a lot of people are freaked out by the work I do. One time, when I was being introduced to some new people, I decided to tell them I was a bone cleaner. I wanted to see how they’d react, and it was just as I expected! They grimaced unintentionally; eye contact wasn’t natural like before, some of them even choked while eating. Exhuming bodies isn’t my main job, but even so, it still hurts to see how people react; it’s a decent job, so what’s wrong with it? But ever since then, I don’t introduce myself as a bone cleaner when I meet new people anymore. It’s partly because I don’t want my kids to be put in an awkward situation. If adults behave that way, just imagine how kids will react. My first time exhuming a body was in 1997; yup, that sounds about right. That was when one of my relatives asked me to do it. I guess everyone in the family thought I was the right age for the job. Because it was for a family member, I accepted. I thought nothing of it — just digging up bones, that’s all. But when the grave was finally dug up and I got ready to open the coffin, suddenly I felt freezing cold and both my hands went numb.

I remember those sensations very well, the feeling of facing a different world for the first time, the world of the dead. When I opened the coffin lid and saw the remains inside, suddenly I felt confused, my hands and feet were shaking and I didn’t know what to do. Somebody next to me gave me a nudge and I slowly remembered what I’d come there for. 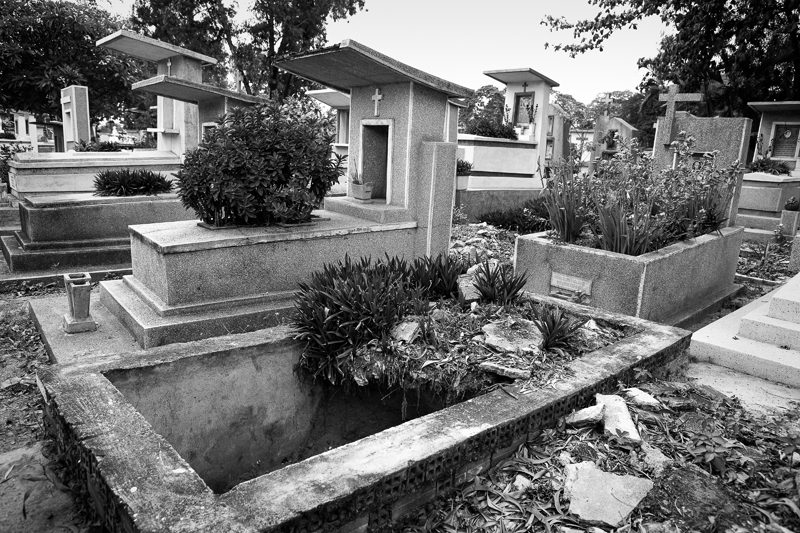 You’ve got to exhume bones in the right order. You exhume the skull first, then the bones of the left arm, the right arm, the thigh bone and shin bone of the left leg, then the right; after that, each rib bone, and then finally the vertebrae. My job is to climb down into the grave, lift each bone out of the coffin and clean the sediment off with water. Then I give it to someone else standing at the side of the grave, who washes it again with water that’s infused with cardamom and cinnamon. After they’re all cleaned, we put the bones inside a smaller coffin. By then, my work is pretty much done.

After I exhumed my first body, some other family members asked for my help. Gradually I got more and more familiar with the work. Then word started getting around, so after a certain point — I’m not even sure when — exhuming turned into another job of mine [smiles]. My wife, of course, doesn’t want me to do this anymore. She wants me to retire completely, but when people ask me, I can’t refuse. I do this job to help others, not to make a profit. Usually when I exhume for a close relative, I don’t take any money, I just eat the meals they offer me in gratitude. As for other people, I take about VND500,000 or VND700,000. The way I see it, the main thing is to help other people and accumulate merit for future generations. 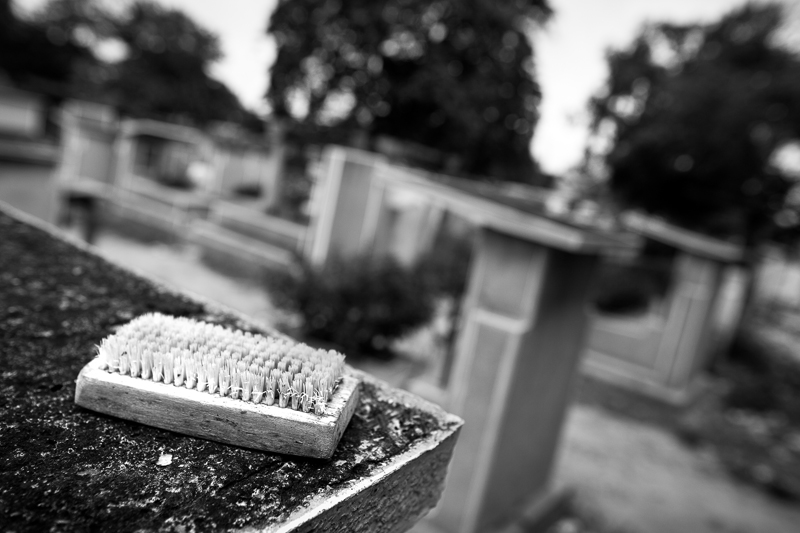 My wife may not like this job of mine, but she’s still very caring. Every time I come home from exhuming a body, she heats up a tub of water with herbs in it for me. This helps get rid of the odor when I bathe. And before I head out, she prepares all my work clothes and gear for me: a raincoat, a mask, rubber boots, and gloves. I actually didn’t use gloves the first few times. To tell you the truth, those times were a bit disturbing.

Talking about disturbing, I have to tell you my most frightening story. It happened when I was exhuming a body not far from here, in fact. When the coffin lid was lifted, everyone was shocked to see the body with its flesh still intact. We had to pour two five-liter bottles of pure alcohol over the body to try to strip off its flesh. And even after all that, I still had to put the bones in a nearby pool of water to rinse them off. After coming home, I couldn’t eat, couldn’t sleep…lost a few days because I was so haunted by the vision of what I’d seen. But I still couldn’t refuse when the next person came by and asked me to exhume a grave. My wife got really upset at me then, asking me if I wasn’t afraid of exhuming again. I kind of just smiled at her. What else could I do?

People usually exhume bodies at the end of the year when the fields are dry. According to the custom in these parts, we should exhume the body between midnight and 3am, when the winds are quiet and before the sun rises. People don’t want to expose human remains to sunlight; that’s what Vietnamese people believe, that yin and yang are opposed to one another. The family has to consider all these factors carefully when they’re choosing when to exhume the body. If the time is right, then it should be done, no sooner and no later. 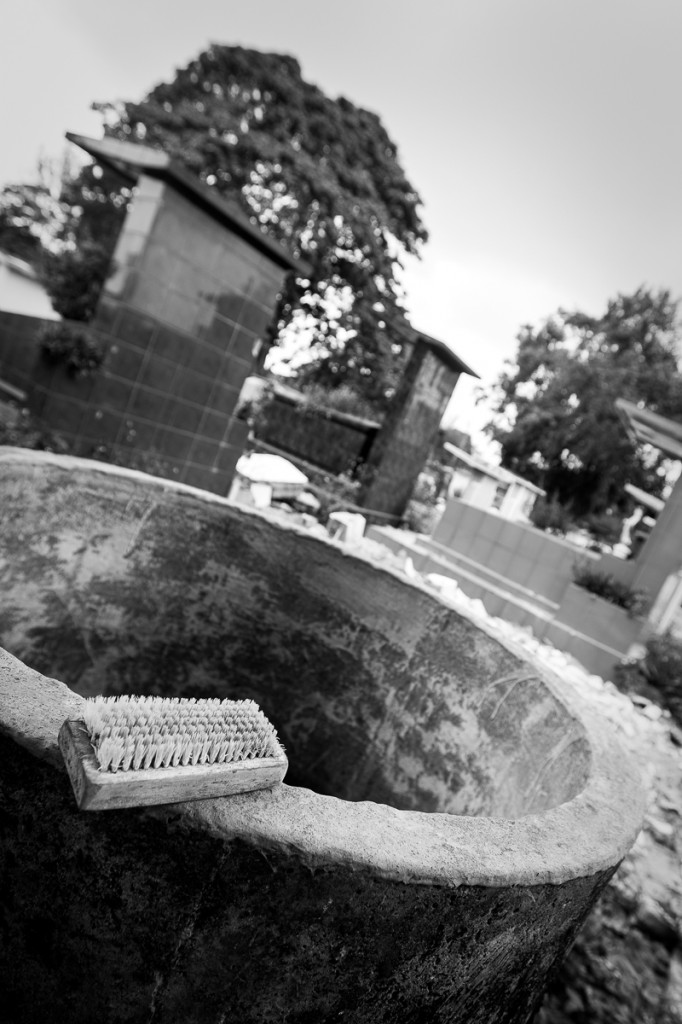 I may not be a professional bone cleaner, but I’m pretty good. It’s partly because of my experience and partly because I’m careful about what I do. There was a time one winter — it was freezing cold and the rain was drizzling — I came down with the flu right there at the cemetery. But the correct day and time had come. My sense of responsibility meant I just couldn’t let the family down. So I dragged myself to the graveside and got the job done. The thing I fear the most are nights when it’s rainy and windy, even if I’m wearing a raincoat, I’ll still be shivering by the end of it.

These days, people are cremating the dead more and more. I actually hope cremation becomes popular in places like my village, so we can save more land for farming. Cemeteries encroach on scarce farmland and pollute the soil and the groundwater. I’m not worried about being put out of a job; I just hope that we can find ways that the world of the living and the world of the dead can continue to coexist peacefully in the future.

Additional editing by Gerard Sasges Excerpted from It’s a Living: Work and Life in Vietnam Today, available in paperback on Amazon or as an e-book on iTunes.