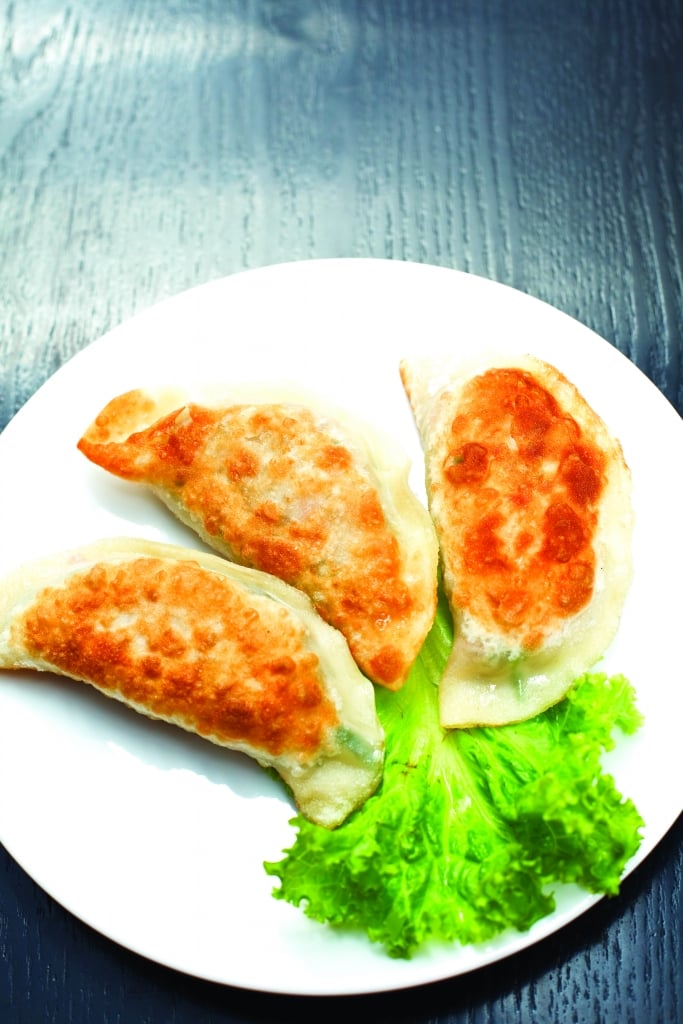 Finding an original take on a major world culinary tradition isn’t easy, sometimes with more misses than hits. Newcomer San Fu Lou (Ground Floor AB Tower, 76A Le Lai, D1) is one that actually succeeds in delivering an innovative dining experience – with its sparkling modern nouveau Chinois décor and show kitchen concept standing behind a solid menu of Cantonese favorites. San Fu Lou’s interior design is exceptionally easy on the eye – as with the gorgeous Chill Bar upstairs, it’s the brainchild of famous Dubai-based architectural firm dwp, laid out with their signature open spaces and snaking partitions. Their design here is a funky, modern take on the classic Chinese teahouses you might have seen in old Kung Fu movies – a mezzanine terrace winds around a central opera stage, which here takes the form of the open kitchen.

Despite being right in the center of the dining area, the show kitchen isn’t a distraction to diners – who are invited to look on while the chefs do their magic – and it’s intended to serve as a demonstration of the restaurant’s strict food preparation standards. The finishing touches are very fine – the décor is trendy, the tables inset with reimagined Chinese porcelain tiles bearing rich, earthen-colored ceramic tableware. The ambient music isn’t classical Chinese ensemble pieces or vapid Mandopop, either – it’s light techno jazz. All of this hits the mark as being perfectly cool. If you take a stroll around the glass paneling, you’ll notice the show kitchen is laid out in three distinct divisions. This is an important feature, as it’s part of the restaurant’s ‘trinity’ concept – which the three owners have spelled out in verse, brushed reverently onto its walls in large Chinese characters like ancient poetry. “San Fu Lou” translates as “The House of Three Blessings,” and this is chiefly manifested in the three main categories on  the menu – dim sum, BBQ and wok – each of which has its own designated kitchen area.

It’s done beautifully – the BBQ area has an open hearth with tender, dripping meats roasted on a spit over applewood; the dim sum area has its collection of large bamboo steamers; the stir-fry area with its glowing woks. With such a chic veneer, you’d imagine that a night at San Fu Lou is going to make a big dent in your eat-out budget – but you’d be mistaken there. Prices are midrange and set at rates families can afford (although this is probably going to be one of the restaurant’s main obstacles, in that it looks more expensive than it really is). While this is something for the restaurant to worry about, it works in favor of the customer – diners can order a veritable smorgasbord of dishes from across the menu and eat better for less. It’s certainly worth ordering more items in terms of the quality of the cuisine, too – with all its flashiness, San Fu Lou doesn’t attempt to dazzle the diner with odd food experiments or zany fusion recipes; the food is just balanced, healthy and well-presented.

It must be observed that, much to the relief of the casual dining set, San Fu Lou isn’t pretending to be wildly authentic either. This is a blessing, as Cantonese cuisine – the real stuff that is – can tend towards being mildly Fear Factor by nature: trust me, chicken feet are the least of your worries. The restaurant focuses instead on the more agreeable task of serving tasty dishes from the Canton region. The dishes are classics, and not overpowering. The meats are lean and juicy. Most of the meat is relatively bone-free, too, which is a  godsend if you’re used to picking Chinese fish dishes to pieces. Spices are fresh and well-balanced – there’s actually nothing to offend the nostrils or the palate here, making this one of the more approachable venues in its category. We went ahead with a few recommended favorites from across the menu’s three-style range. We started with a combination chicken, duck and pork platter (VND185,000) – very moist and tasty – set off by sautéed French beans (with spicy shrimp paste – and a pleasant, Cantonese one rather than the odoriferous Vietnamese delicacy) at VND75,000. These were very crisp, fully absorbing the flavor of the meat and sporting a cheeky burn. Those dishes were nicely offset by a Hong Kong-style steamed grouper (VND155,000) and duck black truffle dumplings (VND65,000). While the fish was unusually well-done, it was devoid of any unpleasant odor and went down well, while the dumplings tasted wholesome and light.

The dish I was particularly curious about was the xiao long bao (you may know them as Shanghai soup dumplings) which at VND90,000 are made (“just for fun,” I was assured) of dough blended with food coloring that rather closely resembles Play-Doh. Each cooked xiao long bao is a different color, although they’re uniform in taste – filled with a rich mince and broth. While this can make them difficult to eat (bite from the wrong angle and the scalding soup will dribble out over your chin) by making a cautious approach, you’ll be rewarded by its taste and warmth on the tongue. We finished off the meal with fried rice (with shrimp, scallops and squid chili paste) at VND135,000, which was worth its higher-than-average price for its intense flavors unusual in such a dish – and a plate of salted egg buns (VND40,000) for dessert. These are not as salty as you might expect – the filling is a delicious milky custard that will please absolutely anyone. The venue is located behind the New World Hotel and with its 3am closing time, it’s well-positioned to tempt hungry clubgoers well past midnight.