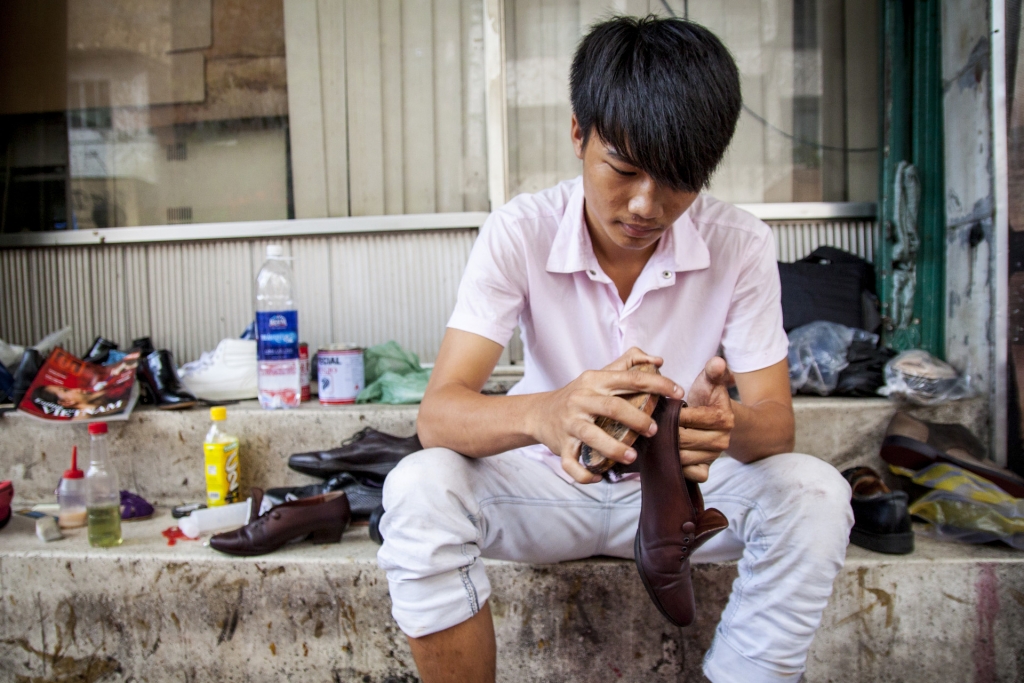 My Life as… a shoe shine boy

My name is Son and my hometown is Nam Dinh Province. I’m 26 years old. After I finished secondary school back in my hometown, I went to Hanoi to work and I’ve been here for 10 years already. I work for the railway and when I’m not working for the railway, I shine shoes. There are three kids in my family. I’m the youngest. My brother and sister live in the countryside. They work in the fields as farmers or they just sell small goods here and there. I have a wife and a one-year-old daughter. My wife farms in the countryside and I work in Hanoi. 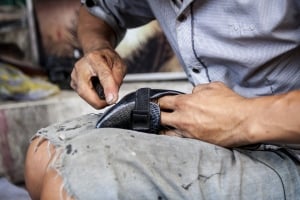 Any extra money I make I send home to my family. It’s not a lot of money because the cost of living here is quite high, but usually I
send about VND1 million back a month. It used to be easy to save money. Now, money loses its value so quickly I just can’t save as much anymore. It doesn’t matter how hard I try. During the weekends, I start work at 8am and keep shining shoes for the whole day. From 8 to 9 in the morning is when I get the most customers. That’s when they’re usually sitting at cafés, having their coffee, reading the paper, or just chatting with each other. But for my job, I basically just wander around the Old Quarter for the whole day. In the afternoon, I go back to the guesthouse in Phuc Tan to have some lunch. I rent my own room. I don’t share the space with anyone. I take another break for some food from 6pm to 6:30pm. By 7pm the sky is starting to get dark, so I’ll continue wandering a little longer and then stop. 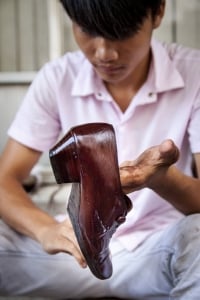 As for my job with the railway, I have to work all day and the pay isn’t high either, VND2 million a month. On weekdays, I start at 8am and finish at 4pm. Afterwards, I make time to go shine shoes for another two or three hours. When I see a potential customer, I just invite them to get their shoes shined. In general, rich people want their shoes shined more often. When I shine a pair of shoes, I give the customer these plastic flip-flops to wear while I’m shining. Beside dress shoes, I can also polish
athletic shoes with water and soap. I charge VND7,000 for each pair of shoes. Normally, I polish shoes for Vietnamese people. If I offer the service to Westerners and they accept, then I’ll do it. If they don’t want it, then I move on. There are a lot of shoe shiners who will beg Westerners, even try to take their shoes off for them, but that’s not how I do it, I won’t beg. Most of my customers are regular customers. I like regular customers because while I’m shining their shoes we can joke around a little.

The hard part about this job is always having to walk around to find customers. That’s when you can get caught by the cops. Several years ago, the cops started trying to catch shoe shiners. And if they caught us, it wasn’t just to fine us, they put us in jail. For the first offense, we’d get 15 days in Dam Dau jail in Dong Anh. The second offense was three months at Ba Vi. The third offense was six months, and so on. In Dam Dau jail they didn’t make me do much, they just locked me up. But in Ba Vi, they say the inmates have to tend cows and stuff. Luckily, I’ve only been to Dam Dau. [Laughs] 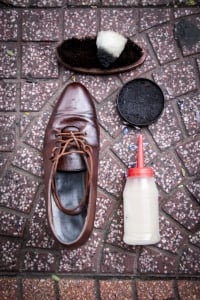 When I first started shining shoes, we used to carry our polish and brushes around in a special wooden box. But ever since the cops cracked down, we’ve had to disguise ourselves. We put our gear in shopping baskets or plastic bags. But at least these days the cops don’t chase us like they did a few years ago. Now it’s only when they get a special order that they come after us. I don’t know why they target shoe shiners. The only thing I know is that they get the order from higher up. Maybe they think we’re homeless people and we’re bad for the city’s image. Hanoi has changed a lot since I started working here 10 years ago. The streets used to have more room to walk, but these days there are so many cars and motorbikes, it’s very cramped now. Back in the day, shoe shiners would have their own turf, and each one just worked their own area. But by the time I started working in Hanoi, the system had already broken down.

When I first started, there was a lot of competition, but not anymore. Now there aren’t many shoe shiners left in Hanoi. Us ones that are left, we avoid each other. If I see there’s already a shoe shiner at a café, I won’t go in. In general, I love the sense of freedom this job gives me. I don’t like the feeling of being tied down. For example, I wouldn’t want to be a security guard because it would force me to sit still all day. But then sometimes I look at people with stable jobs, and then I look at myself, just wandering around aimlessly my whole life. Then I pity myself. I have no idea about the future of this job. My friends don’t even do this job anymore. As for me, for now I’ll just keep on doing what I’m doing. If I could choose another job in the future, I’d want to be a taxi driver because it’s easier to earn money. I’ve got some friends who’ve become taxi drivers. I’d like to learn to drive, but I can’t afford to pay for the lessons. Mainly, though, I have to think about the future of my little girl. I have to find a way to put her through school so she can have a higher education than I got. We can’t have her end up just wandering around endlessly like her father. [Laughs]

Additional editing by Gerard Sasge. It’s a Living: Work and Life in Vietnam Today is available in paperback on Amazon or as an e-book on iTunes