The best of rioja in Vietnam

Wines from Rioja are internationally renowned as the best wines from Spain. This small region located in the North of Spain probably has the country’s longest history of producing wine, dating back over 2,000 years to Roman times, and is the oldest and first officially recognized wine producing area in Spain, which was first chartered in 1925 by the Spanish government. Since then, the official regulatory body has imposed very strict regulations to all Rioja wineries, aiming to keep the standard extremely high, and to preserve their well-deserved reputation.

While Rioja is geographically small – within the wine area, less than 100 km separates the west from the east and at just 40 km wide – it has three very different areas within it: Rioja Alavesa (known for producing the best wines, influenced by the Atlantic sea weather and small land plots), Rioja Alta (also influenced by the Atlantic sea weather but with different soil) and Rioja Baja (perhaps producing the lowest quality wines, influenced by Mediterranean weather, warmer and drier).

Eguren Ugarte, one of the most prestigious wineries in Rioja Alavesa, presented a selection of its award-winning wines last month at Sofitel Saigon. The winery belongs to and is run by the Eguren family, devoted to the world of wine since 1870, currently in the hands of the fifth generation of wine growers and winemakers. The winery, which I visited last year, has managed to maintain the tradition of winemaking while incorporating the latest technology in growing and producing wine, resulting in exceptional wines that have won numerous national and international awards.

The Eguren family built a beautiful boutique hotel on top of the winery in 2010. Thanks to the layout of the land in this area, the hotel acts as a perfect viewpoint located between the Sierra Cantabria mountains and the vineyards, providing guests not only with the tranquillity of the surroundings but also with incredible peaceful views of the wine growing area and gardens. With just 21 rooms and a restaurant managed by three-star Michelin chef Eneko Atxa, the hotel won an award for the best wine tourism hotel. Amaia Urabain, Asia Director of Eguren Ugarte, was at the hotel to represent the brand.

When asked what makes Eguren Ugarte wines different and better, she replied: “There are several reasons that justify our wines having won so many awards, while keeping very reasonable prices. First is the respect for the environment and tradition. Unlike many other wine producers, we own all the 130 hectares of vines we cultivate. This gives us the opportunity to ensure that the environment is respected and that quality rather than volume is maintained as first priority. Some of our vines are over 100 years old. Obviously the yield they produce is very low, however the quality is exceptional, hence we use their grapes for our top wines. Second and equally important is the Eguren family’s passion for making great wines and for sharing them; we don’t sell wine to customers but to friends, we even offer customers the use and enjoyment of private cellars within our winery, where they can bring friends and family to enjoy the wines and atmosphere.”

If you believe in international experts, even the entry level wines from this family have been awarded with 87 points by International Wine Cellar, with the star wine having obtained 94 points from Robert Parker. My favorite is the Crianza. It is inexpensive and delicious, especially if you consider the vinification process, with 15 months in American and French oak barrels and a further six months aging in bottle, a very elegant wine with clean aromas, smooth and excellent long final aromatic notes.

These wines are being distributed in Vietnam by Saigon FNB, and are also available at Sofitel, Ole and Wine Embassy, where you can enjoy them with delicious food. 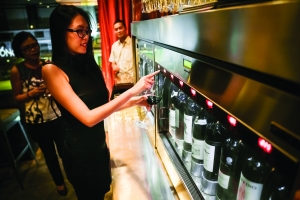 Alfredo de la Casa has been organizing wine tastings for over 20 years, published three wine books, including the Gourmand award winner for best wine education book. You can reach him at www.wineinvietnam.com.