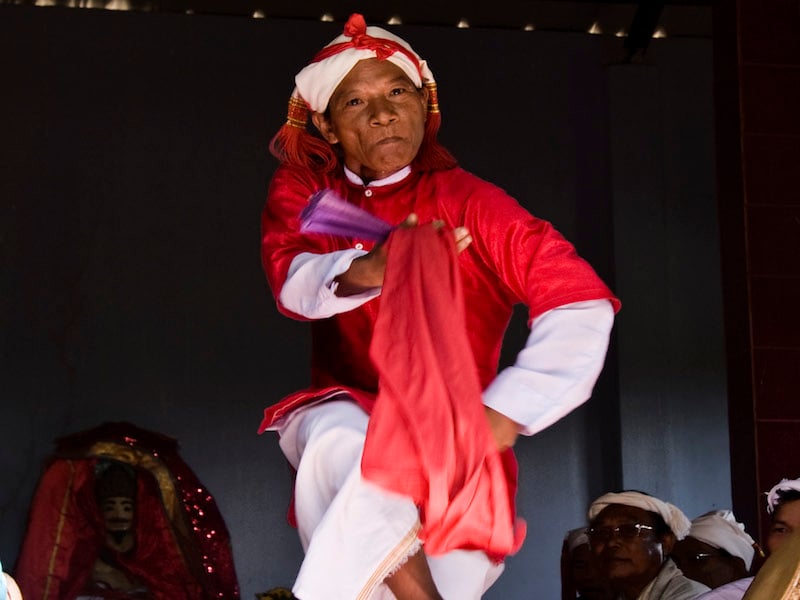 An inside look at a Cham New Year celebration

When people speak about Cham, the first thing that comes to mind is the Kate festival. One among Vietnam’s five most important cultural events, it’s celebrated by the nearly 200,000 Cham ethnic minority people in Vietnam and countless tourists and photographers drawn in by its vibrant beauty. But the Cham also hold many other festivals and rites which, while smaller and lesser-known than the Kate festival, are of no less importance. These are the formal ceremonials steeped in Cham culture and history that few outsiders have had the privilege to witness.

Cham society is a matriarchal one, where the mother figure and the force of natural procreation lay the foundations for Cham culture and religion. Opposing symbols such as yin and yang or male and female can be found in all aspects of Cham life, from their clothing and architecture to normal everyday objects, even in their poetry and cultural rituals. These symbols are unique to the Cham, one among the last representatives of their indigenous heritage.

The Cham worship Po Inu Nugar (The Sky Mother), the original matriarch who gave birth to their people. The annual Kate festival is in her honor. During Kate, Cham women dress in beautiful, elaborate costumes to join the procession in Po Inu Nagar’s name as a way to celebrate and commemorate the many merits Po Inu Nagar granted the Cham.

Aside from Kate, the Cham also hold Rija Nugar (Cham New Year). The Cham calendar begins in around April of the lunar calendar. During this time, the Cham hold the Rija Nugar to commemorate past ancestral heroes with great deeds. Rija Nugar has a second meaning, that being to wash away all unclean things from their palei (village) and prepare oneself for a good future. 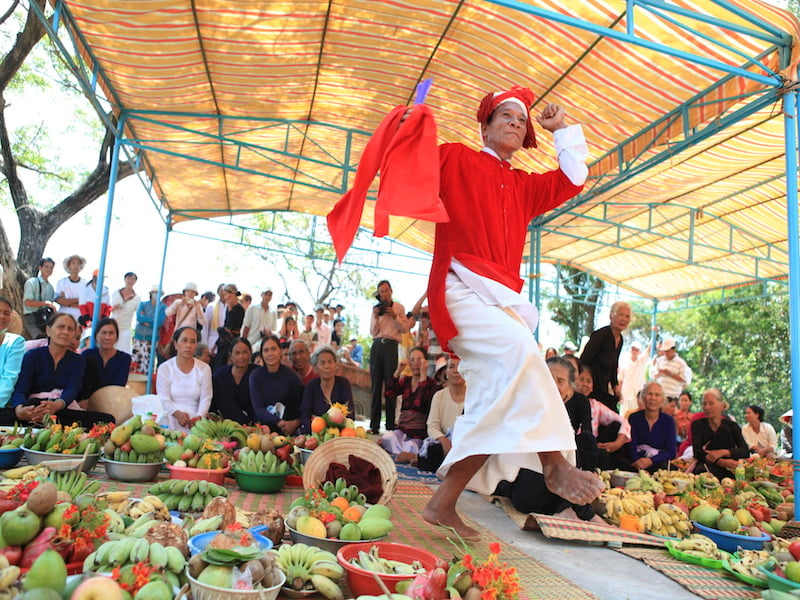 During the Rij Nugar celebrations, the Cham hold a specific ceremony where Ong-Ka-Ing, the Cham shaman, plays the central figure, performing ritualistic dances for the community. During the ceremony, Ong-Ka-In is dressed in aw lah, a garment made from sewing six pieces of cloth together, two forming the back, two forming the front, and the last two forming the sleeves and shoulders. This unique sewing technique was developed in a time when looms could not be used on any piece of cloth exceeding one meter in length. The aw lah is short, only coming down to the buttocks, and it has two slits on the side of about 20 centimeters in length. The front of the aw lah has a slit, buttons and two pockets while a stand-up collar hugs the neck of the wearer. Aw lah is usually in color blocks of white, red, blue, and yellow, with no patterns. Ong-Ka-Ing wears a turban with red tassels like those worn by Brahman and Muslim priests.

Once the music starts, Ong-Ka-Ing starts his performance in honor of various Po Cham. The dance movements hold specific messages only known to the Cham. To this day, Cham parents still teach their children how to read Ong-Ka-Ing’s dances and comprehend the great labors of their ancestors.

There are four main dance stories performed in Rija Nugar:

Po Riyak was born in Bicam village (now Binh Thuan province). As Po Riyak grew up, he traveled to Malaysia to further his studies, hoping to come back and help his homeland once he was finished. When he was away, he heard word of an invasion and attempted to return. During the sea journey back, a storm sunk the entire boat and everyone on board perished. In memory of Po Riyak, the villagers of a nearby coastal town built a temple in his name, honoring him as the deity of the waves symbolizing the Cham people’s patriotic love.

Po Tang Ahok was a great general of the ancient Champa fleet. His entire life was spent on the sea and in battle to keep his homeland free of invaders. His life was often spent in loneliness with only the sea and his paddle as companions. Stories tell that at times, even his trusty paddle broke under his will. 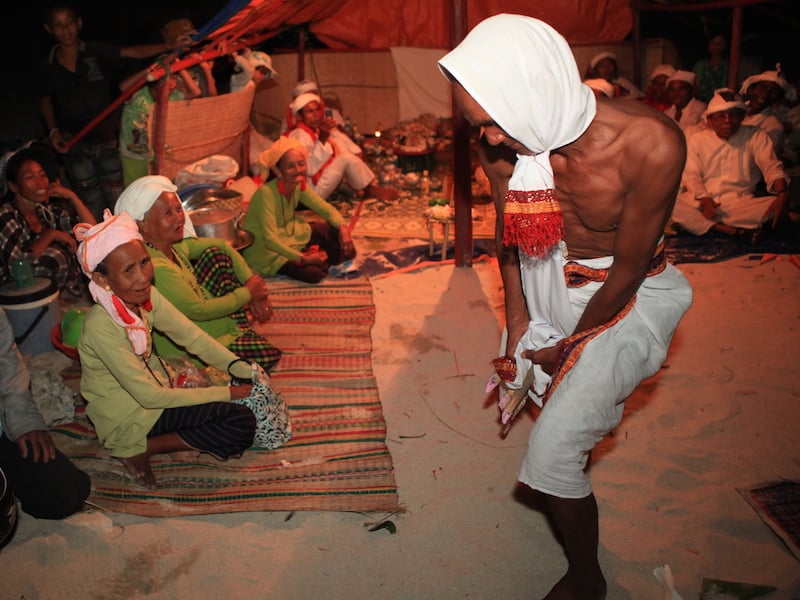 Nai Tangya was a princess of Panduranga. When she was young, Nai Tangya traveled extensively to learn about the heart of her people. As a result, she was given the name Nai Rah Nugar. As she slowly became an adult, Nai Tanya fell in love with Kei Kamao, a handsome and talented Roglai man. However, since their families were of two different social classes and prestige, the relationship was broken off and Nai Tangya went into seclusion in the mountains. The dance is performed to the sound of a Khan Nhjram instrument, and with a plate of fruit and cakes as an offering to Po Nai.

Po Hanim was a talented army general. Through many battles, he kept his homeland free of war and strife. He was famous for his weapon, a rattan switch. Part of the dance involves walking through fire to show Po Hanim’s will to surpass all obstacles and claim victory.

Ong-Ka-Ing’s dances during the Rija Nugar are accompanied by three main Cham musical instruments – the ginang drum, baranang drum and saranai clarinet – as well as other gongs and bells.

Like Tet to the Vietnamese, Rijar Nugar marks the end and the beginning, and a badly performed Rijar Nugar may mean misfortune and disaster for the coming year for an entire village. Few outsiders are allowed the privileges of entrance into a Rijar Nugar and as a result, even fewer know of its cultural and historical significance.