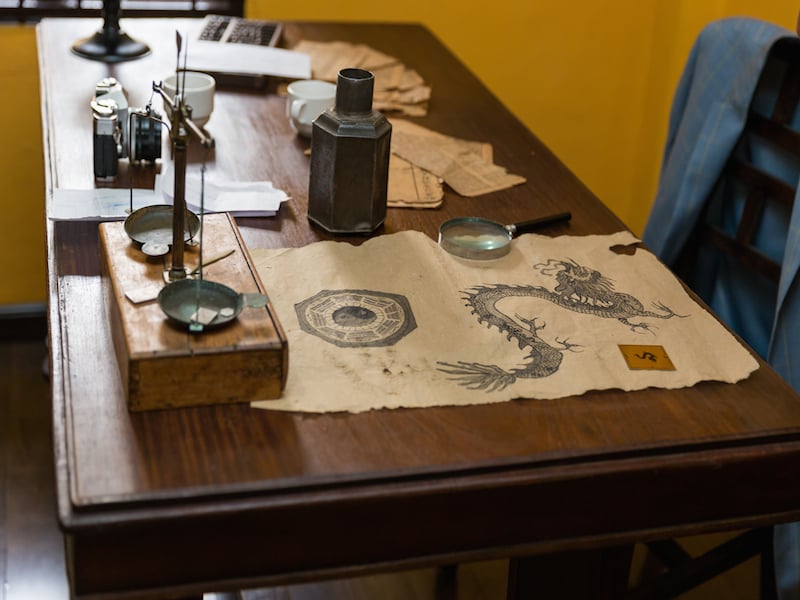 Step into a murder mystery that will take you across the city, exploring every dark corner for clues…

At around 10:30PM last night, the body of Dr. Lam was discovered on the floor of his apartment in central Cholon. He was most certainly murdered in a strange, ritualistic fashion – and while the police do have a number of people in custody, they remain baffled. Their best chance at solving the case is somewhat unorthodox: bring in a group of tourists, equip them with a compass, map and magnifying glass, and send them out into the streets of Chinatown in search of clues.

Find the murderer, and they may be on their way to uncovering an ancient mystery that has lain hidden in the shadows of the old Chinese city for centuries. 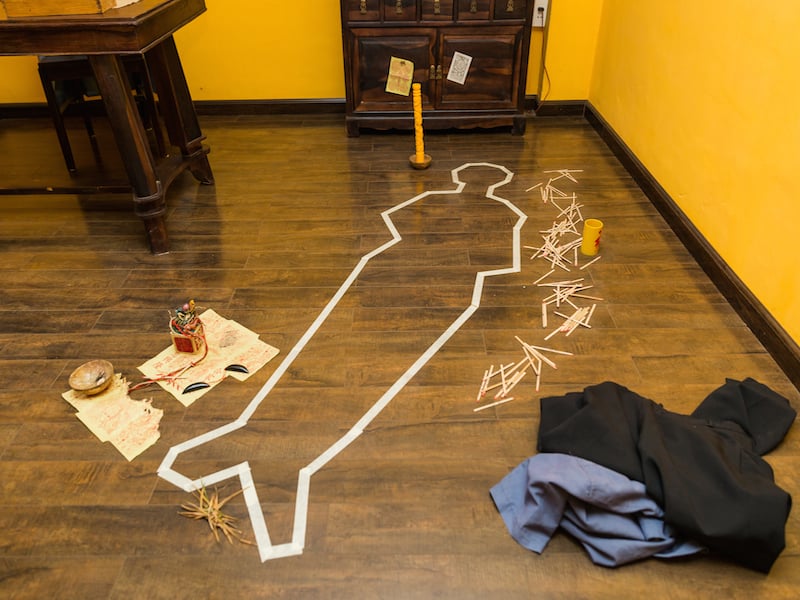 Such is the premise of Ubiquest’s (www. ubi-quest.com; regularly VND1.1m/person but only VND950,000 before February 19th) intriguing new tour game Urban Tales, a mashup of role-playing and The Amazing Race that lends a measure of fun and mystique to the exploration of a fascinating part of town – an area which has been difficult for the tourist industry to crack. 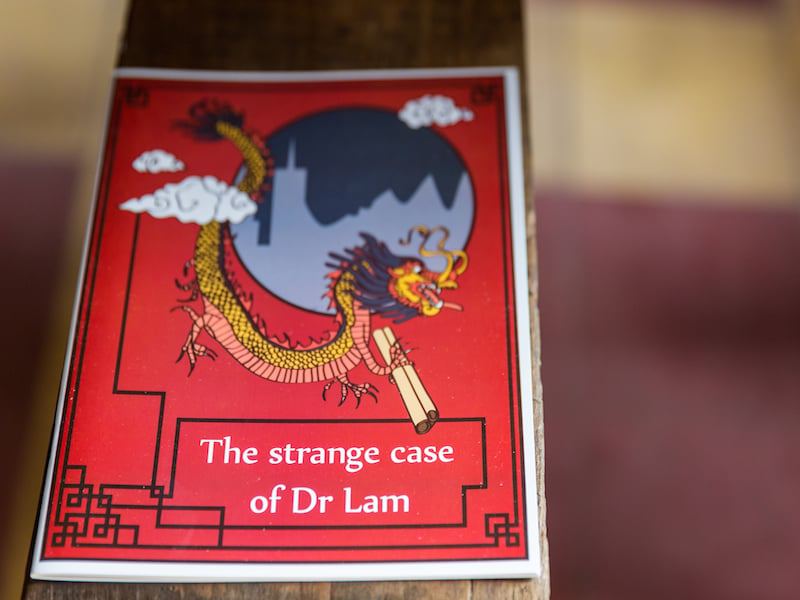 According to the venture’s CEO Nicolas Plesse, both tourists and those of us who live here rarely get to see the best that Cholon (one of the oldest developed parts of Ho Chi Minh City, and originally a Chinese city unto itself) has going for it. “Most of the tours take people out to Binh Tay market – which isn’t even the original one – and then bring them back again,” says Nicolas, whose interest in the region stems from his several years of working in the local tourism industry. “They miss out on all the more historical parts of town, which are mostly hidden away. The idea of the game is to give people a reason to go and take a look.” 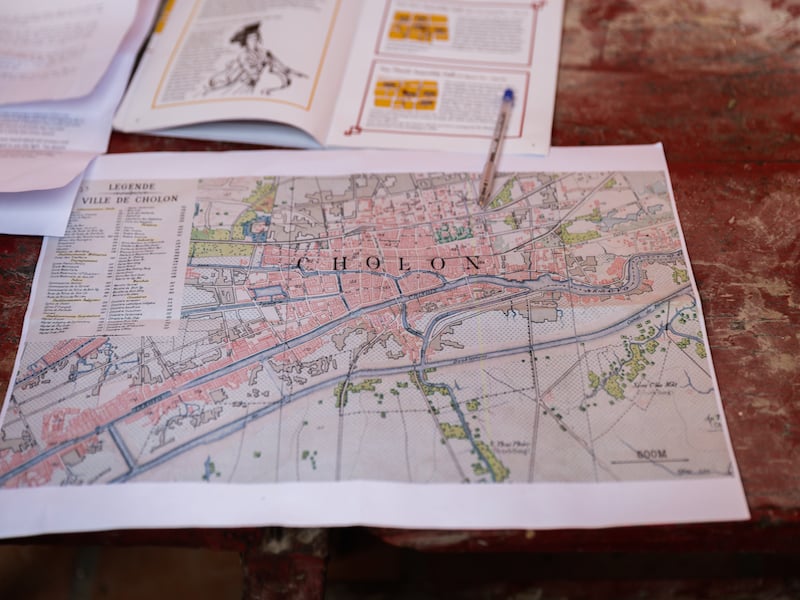 Players meet at Notre Dame early in the morning and get whisked out to the Chinese city in classic old cars, which immediately conjure up the atmosphere of a long-gone era. 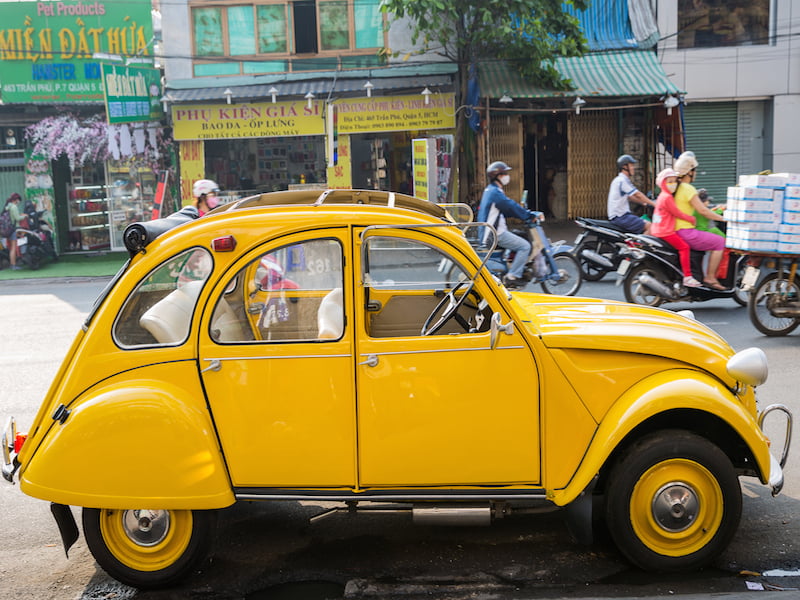 Part of the chemistry of the tour, however, is that it’s not really an attempt to transport visitors into a Cholon of the past – the story is set very much in the present, although the character of the Chinese area is brushed over with an antique pen. Dr. Lam’s apartment (installed in a genuine old-style block that offers a rare chance for non-Vietnamese to see how the locals live) is decked out in early 20th-century fashion, and the plot draws players through parts of town that hint at an exotic, timeless Chinese culture – through traditional medicine shops, old temples, the silk markets and period architecture that has yet survived the wrecking ball – and delves into ancient Chinese legend in a twist that serves to impart some genuine historical information. 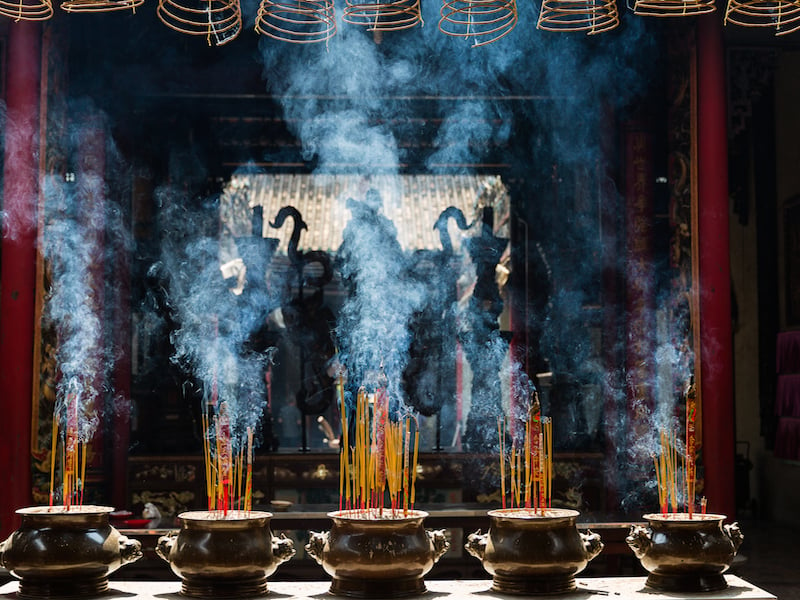 Time to ‘fess up

Nicolas, who himself is very active in the local French improv acting community, plays the chief of police, and while he doesn’t walk players through the game – everyone is divided into self-guided teams, following clues and notes discovered at the scene of the crime – he’s never far behind. 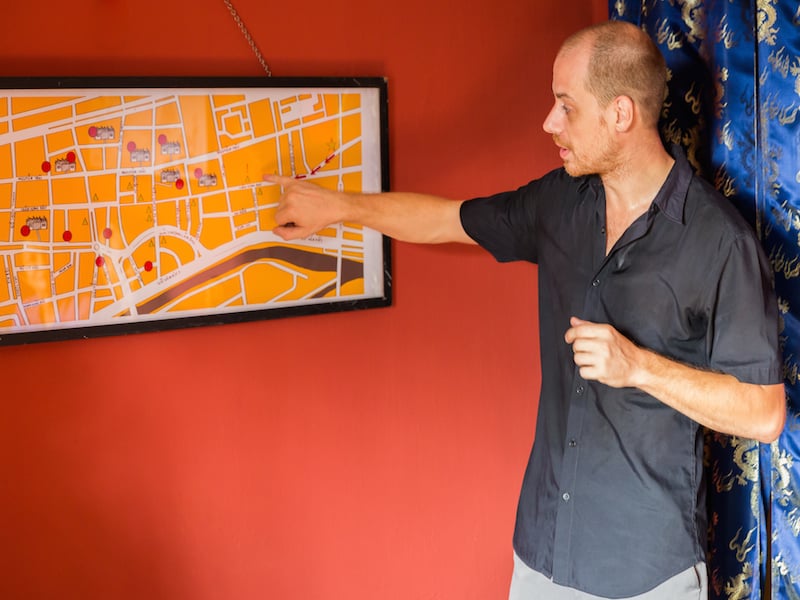 Each team is handed a cheap Nokia mobile (eliminating the need to whip out your own smartphone in the street and risk having it snatched) with which they can contact the police for extra guidance at any time – most especially when they believe they’ve identified the killer. 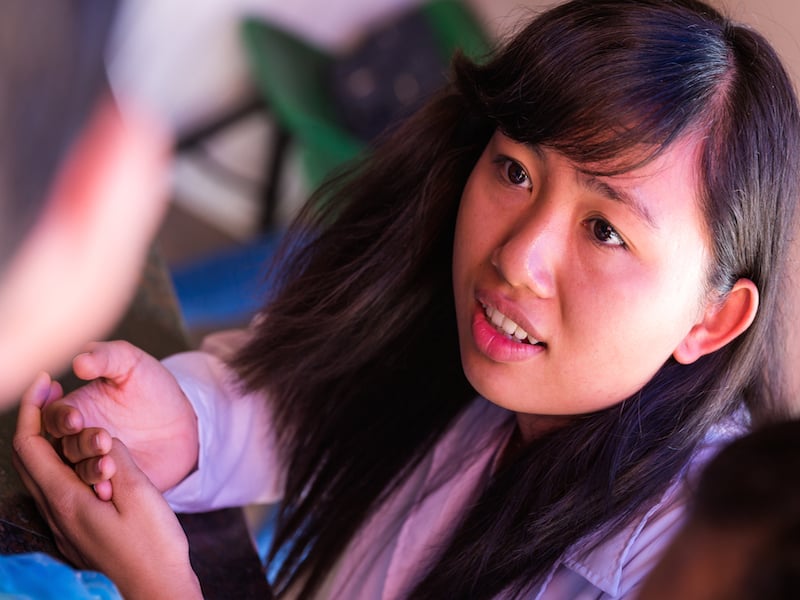 By finding and speaking with the role-playing actors along the way and solving the murder by a certain time, you’ll unlock a second objective that explores the esoteric world of superstitions upon which the game is based. 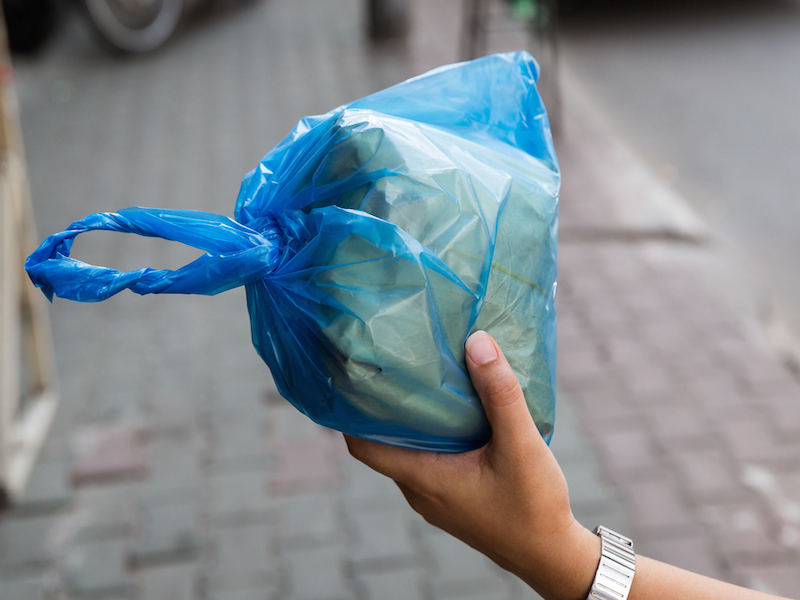 Neither task is terribly easy to solve without paying close attention to the guidebook you receive as you set out on your investigations – but by following the clues and sticking to the trail (gently guided by Nicolas whenever required) you’ll emerge with all the answers, having seen a fascinating part of the city through the eyes of its residents. 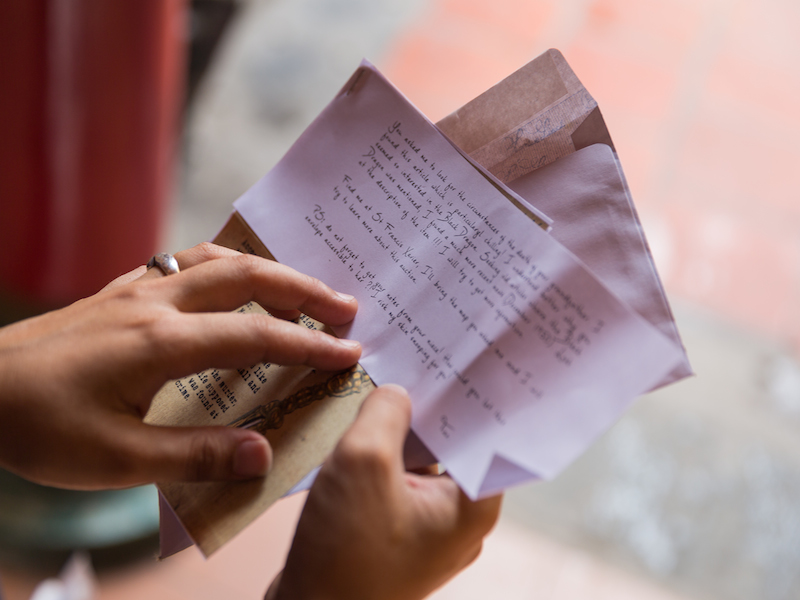 Ubiquest has the formula just right – the game is complex enough to provide a challenge, but the players are given
sufficient time to follow at their own pace. With a certain stamina and the determination to win, players can run through the scenario on foot, covering every stop along the way – while more casual players can take their time to inspect the clues at their leisure, hop between locations by taxi, take selfies in the old temples and follow little diversions of a more traditional touristy nature. The game finishes with a ride by cyclo to a nearby restaurant serving genuine north Chinese delicacies, and then a journey back to the cathedral by vintage car, sweeping you back into the real Saigon with a deeper sense of its concealed cultures. 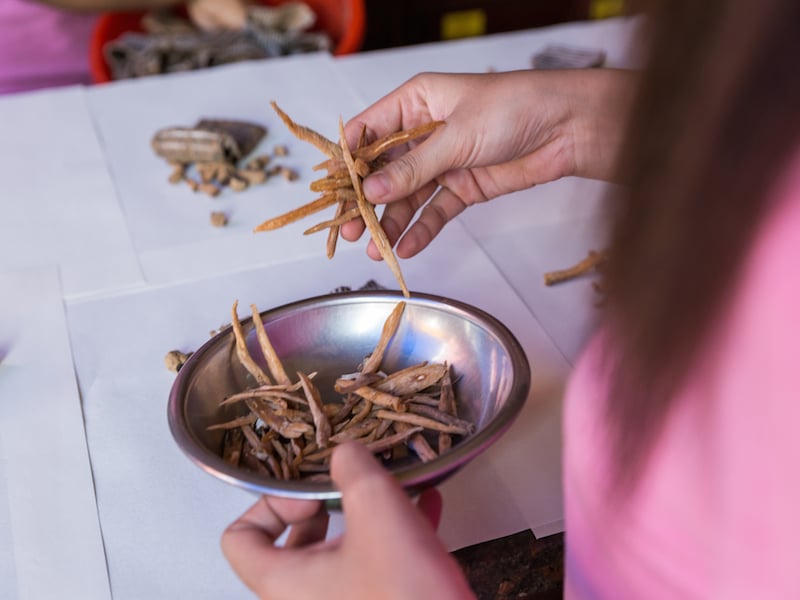 And while we’re not giving away any clues, if you do want to take the game seriously, you might want to pay careful attention to the details gathered by the police from those who were first on the scene – they might just match up with an even older case that remains unsolved to this day. Solid evidence, as any detective worth their salt will tell you, is everything.