The miniature artist: Creating art on a small scale

Six months ago an online game designer with a steady, high-paying job took a huge gamble and went offline.

“I didn’t even dare tell my parents or my in-laws. My friends all told me I was making a mistake and that I was being crazy,” says Vo Thi Anh Nguyet, founder of Clayyot, a studio that handcrafts miniature figurines. “My boss even told me, ‘Maybe you are having an artistic whim. Just take a month off and see how it goes. If it doesn’t work out, you can come back here.’ Until I created the first piece, I had never once thought I would earn a living making clay figurines.” 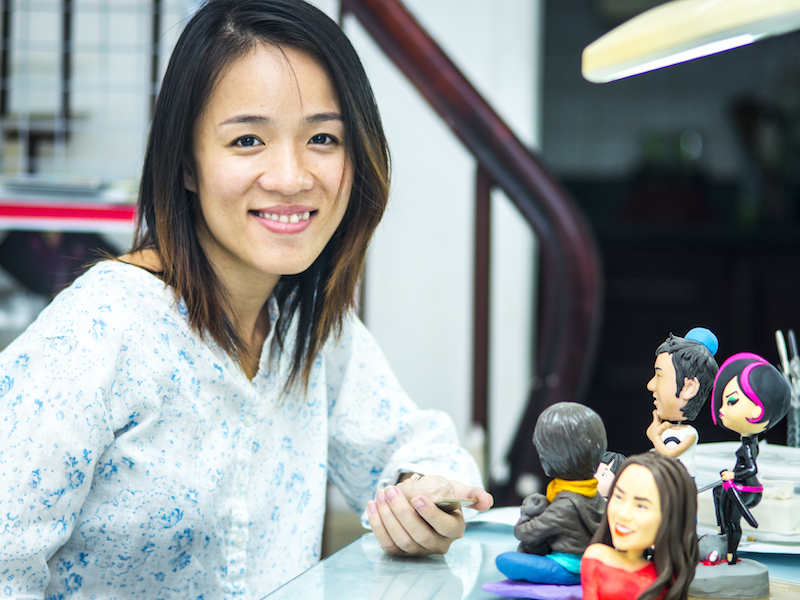 But before becoming a miniature artist, or sculptor, Nguyet was a digital graphic designer at VinaGame for seven years – a job with a high salary, staff benefits packages and a great boss – which made her decision to quit a shock to her parents and friends. “Only my husband believed in me,” says Nguyet. “I followed my artistic instinct. Stability is great but it can also kill an artist’s creativity. I’m lucky that success came so quickly and smoothly, but even if it had been harder, I think I still would have taken the jump.” 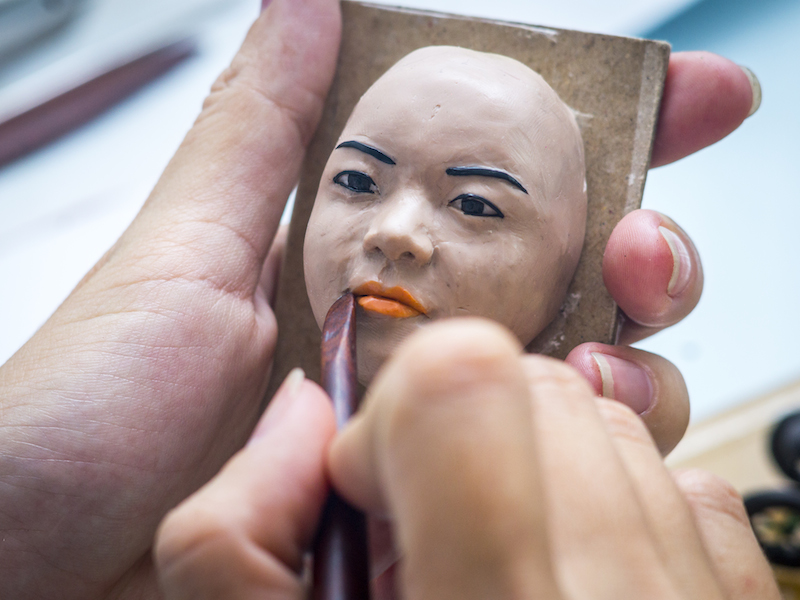 Luckily for Nguyet, she landed on solid ground. Within the first two months of opening, she had more custom orders than she could handle. By the fourth month, the studio was receiving proposals from independent art dealers wanting to exhibit her work. Soon after, international artists like Andrew Hickinbottom (he mailed her a signed painting of his work after she sent him a photo of a figurine she made based on his art) and local celebrities were fans on her Facebook page. Now Nguyet is contemplating expansion to meet demands. 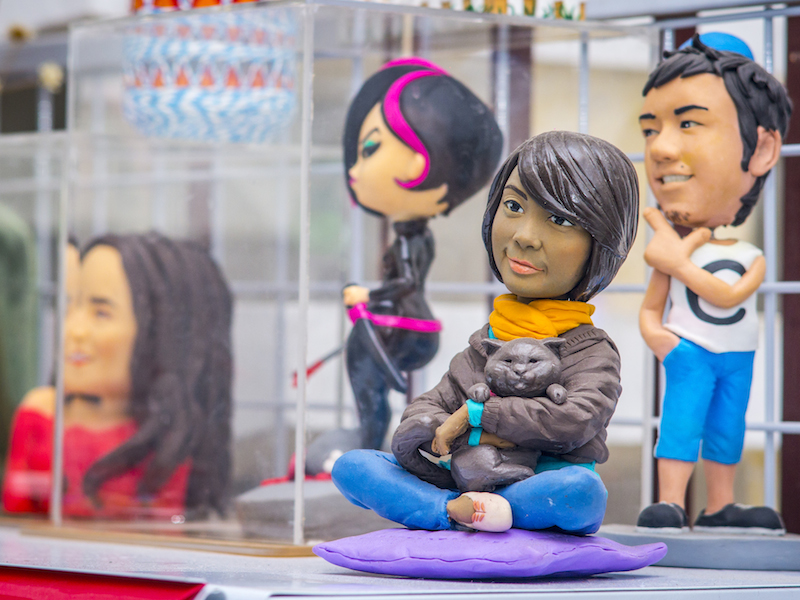 How did it all begin? “I saw some photos on the internet and read some instructions on how to make one,” she shares. “I had received training in basic sculpting techniques back at art school so I decided to make a portrait of my boss and give it to him as a present.” Though it was her first attempt, the figurine’s striking resemblance to her boss was the result of Nguyet’s job as a 3D graphic designer. He liked the figurine so much that he placed it on his desk where it became a conversation starter and also the start of many custom orders from her colleagues.

Nguyet’s pieces are hand-sculpted from polymer clay, baked then painted. A single piece can take from a week to a month to finish, depending on size and intricacy, and range from VND800,000 upwards. Since she has taken on an intern to work the bodies, production time has decreased to half, but the effort and attention required remains the same, especially to faces. 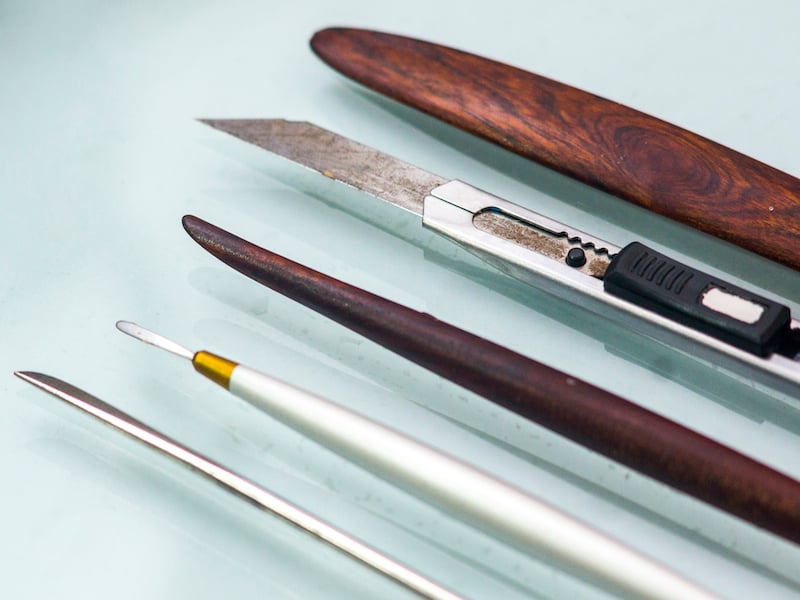 She has big plans for the future. “We have a small work table here for two and maybe one more, but I’m thinking of a big workshop or artist studio in the near future, with a team of young artists all working under the banner of Clayyot, in collaboration with a number of art dealers.” 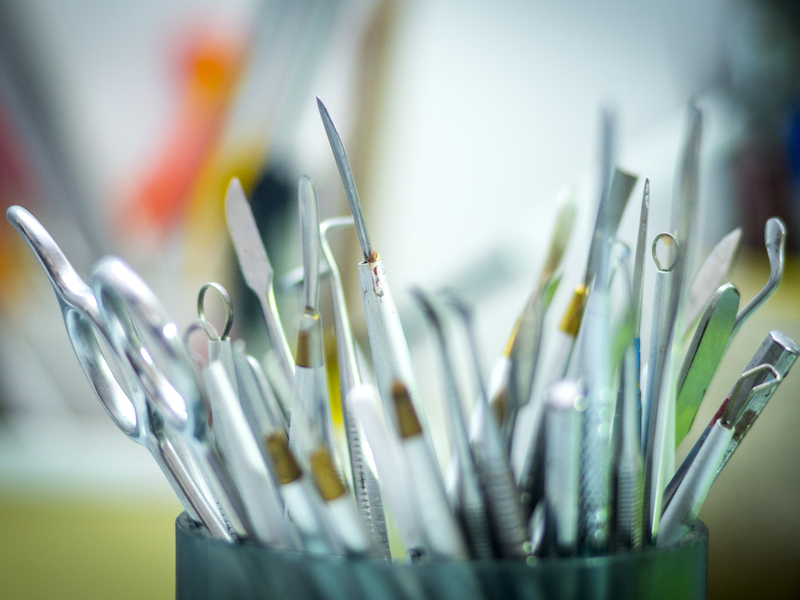 “If you want to make it big as an artist, you can’t think small. I want to make money. I want to be rich… and big,” she adds. “Many would think such ambition unseemly for an artist, but I have never wanted to be a poor artist who lives on nothing but passion. As an artist, I aspire to create great art and want to see great art in all forms and disciplines. But art of that level is expensive. It’s expensive because it requires enormous investment and dedication and commitment. A poor Vietnamese artist would never be able to afford a ticket to the Louvre to see the Mona Lisa. To be able to reach great art and see great art, I need to get on that same level. I, and my art, need to be just as great.” 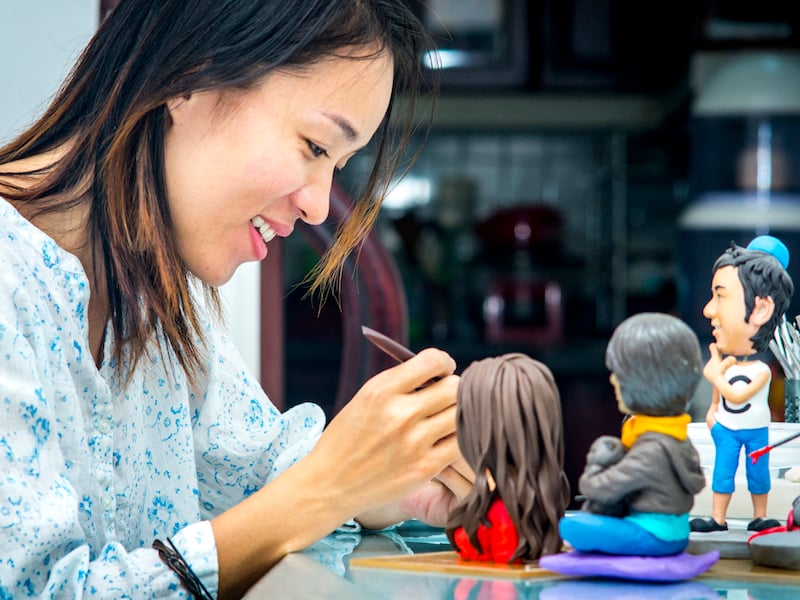