A call for change: Inside the 350.org hub

To the Vietnamese, Minh Hong became a household name when she became the first Vietnamese to set foot on Antarctica in 1997.

The 20-something won a contest that sent her, along with 34 youths from 25 countries, on an UNESCO environmental awareness project to the world’s southernmost continent.

“I was an active, crazy, young person working for Vietnam Investment Review. I had no idea about climate change. I mean, I loved the environment. I never threw garbage on the ground, so I guess I considered myself an environmentalist,” she recalls with a laugh.

“It was totally a big shock, though,” she says of the harsh expedition. “I came to realize how I was absolutely ignorant about the environment. For the first time in my life, I learned about the ozone hole climate change and greenhouse gases. Looking back, I realize how I had no awareness about the world’s problems. I just cared whether my salary was good and if my friends liked me.”

Organized by Robert Swan, the first person to walk to both the North and South Poles, the purpose of the expedition was for these young people to go back to their home countries and spread the word about the harmful effects caused by humans on the environment. It worked.

Upon her return to Vietnam, Hong decided that if her life was to have any purpose, she’d have to quit her job and start working on environmental projects despite not having any training in environmental studies. The Russian, English and Economics student joined the World Wildlife Fund in Hanoi. When she returned to Antarctica for a second time in 2009, she saw a banner for an international environmental organization called 350.org and saw an opportunity to lead the charge for a nationwide grassroots climate movement in Vietnam. This time, she wasn’t interested in awareness raising. It was time for action.

350.org’s stated mission is to “reduce carbon dioxide levels from more than 385 parts per million to 350 parts per million, a safe upper limit to avoid a climate tipping point, by encouraging citizens to action… to raise awareness about anthropogenic climate change, to confront climate change denial, and to cut emissions of carbon dioxide in order to slow the rate of global warming.”

Now the Southeast Asia Co-Coordinator of 350.org, Hong’s mission is to adapt the 350.org spirit to the local context. In addition to carrying out the organization’s regional and global campaigns, Hong’s projects include the solar bottle, using daylight to provide interior light to poor homes with just a soda bottle, water and a little bleach; getting corporate sponsors to buy solar cookers (a simple device which uses direct sunlight to heat, cook or pasteurize food or drink) to distribute to poor families; and cooperating with businesses, asking them to green their offices. “Instead of waiting and complaining, why not think of solutions that are feasible? Do whatever you can to be part of the solution,” says Hong.

We talk in Hong’s Binh Thanh office, laptops and plush rhino toys with bandaged horns, part of a campaign with WildAid, strewn about in the cramped space, made smaller with stacks of posters, banners and signs.

“That’s our second mission,” Hong says as she sees me eyeing her staff who are decidedly young and seemingly far too few considering the enormity of the issues they’re facing.

“We’re out to build capacity, especially among the youths.”

Since being established in 2011, 350 Vietnam is the largest youth-led climate change movement in the country. Hong counts over 10,000 volunteers in 20 provinces, and over 30 Vietnamese Celebrity Goodwill Ambassadors among those who’ve heeded the call.

“We try to include people from the provinces, too, instead of just Hanoi and HCMC where the youth have all the advantages. We put on activist workshops so people stop thinking that climate change can only be addressed by the ministries, NGOs and elite university students in Hanoi, but can be done at the grassroots level, in the villages. If we give them the tools, the leadership skills and some funding, we can get them to be as creative as they want. They will think of solutions that we could never think of. Vietnam is still a developing country, but we’re too lazy, waiting for the government.

“The key is to let the grassroots approach work, especially among young people who can take action. They’re well ahead of the adults.”

Hong points to small successes like a seaweed project in Nha Trang, ecotourism in Dong Nai and even a solar cooker cooking competition organized in Saigon’s Phu My Hung.

While Hong advocates the benefits of change on a small scale, like painting roofs white and growing plants on the walls which can save 20-30 percent on electricity usage or using rice husk charcoal instead of the more toxic “beehive charcoal” common to Vietnam, she realizes that she needs to reach the real decision makers in government ministries and large corporations to enact change on a larger scale.

“The tendency is for countries to switch to renewable energy. A lot of them are closing down coal-fired power plants while Vietnam plans to build more. We’re enjoying the electricity, but going against the global trend,” says Hong of Vietnam’s long-term energy plan which includes building 57 new coal-fired power plants likely requiring the import of 20-30 million tons of coal by 2020.

350.org is fighting back by targeting companies who invest in fossil fuel energy. “There’s absolutely some shaming involved,” says Hong passionately of the divestment campaign launched in February.

“We’re approaching [large banks investment funds] because they’re the ones holding a lot of money and can decide to invest in coal mines versus renewable energy sources, so we’re trying to influence their decision of where to invest by providing them with documentation that says that as demand for coal-powered energy decreases, their investments into fossil fuels will be risky.

Most of the people we’ve talked to say they hadn’t been aware of the issues, but we haven’t been able to talk to the biggest guys, the decision makers yet.”

Asked whether she considers herself an activist, Hong pauses before answering. “I’m just interested in activities that lead to good changes for our society. I also want people to be aware of what they can do. Instead of suffering from pollution and complaining about it on Facebook, know how to boycott those companies!”

Hong’s organization also works in wildlife conservation, partnering with WildAid on their “When the buying stops, the killing can too” campaign urging consumers not to buy rhino horn and other endangered wildlife products.

“Vietnam, along with China, is leading the world in rhino horn consumption. People believe it cures cancer and other diseases, but it’s not true. We’ve put on school events and talked to authorities regarding enforcement. We’ve even helped provide sniffer dogs to detect wildlife products. 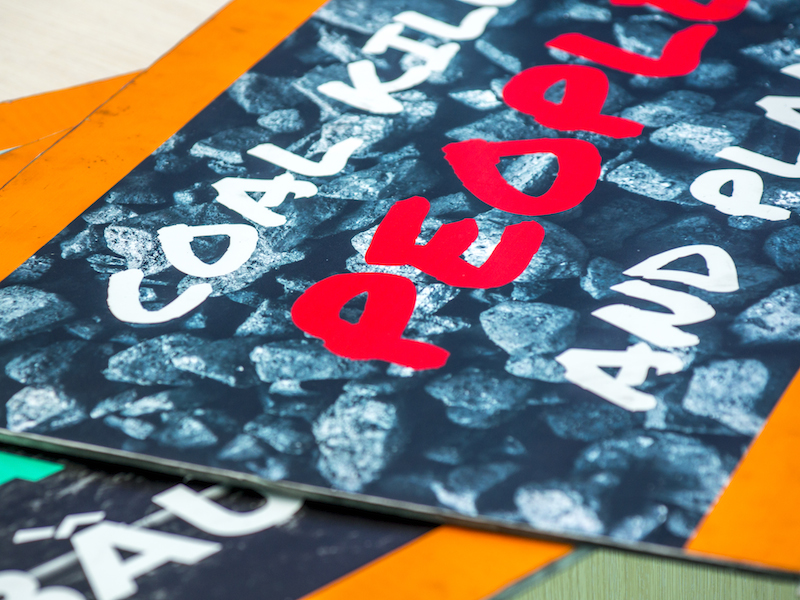 “But really, it’s the rich people who consume the most. Social media campaigns and the like don’t work on them because they’re so powerful. But we’re targeting many different angles. When their children come home from international school, they can tell their dad that he’s doing something bad. When business people go abroad and see images of dead rhinos with the Vietnamese flag next to them, it becomes a matter of national pride.

“We’re getting cancer doctors to talk about it. We’re showing people the facts that 70-90 percent of rhino horn in the market is fake so they’ll be hesitant to make that next purchase. But we have to escalate it to the next level before it becomes too late. If the trend continues, in six years’ time the rhinos will be all gone.” 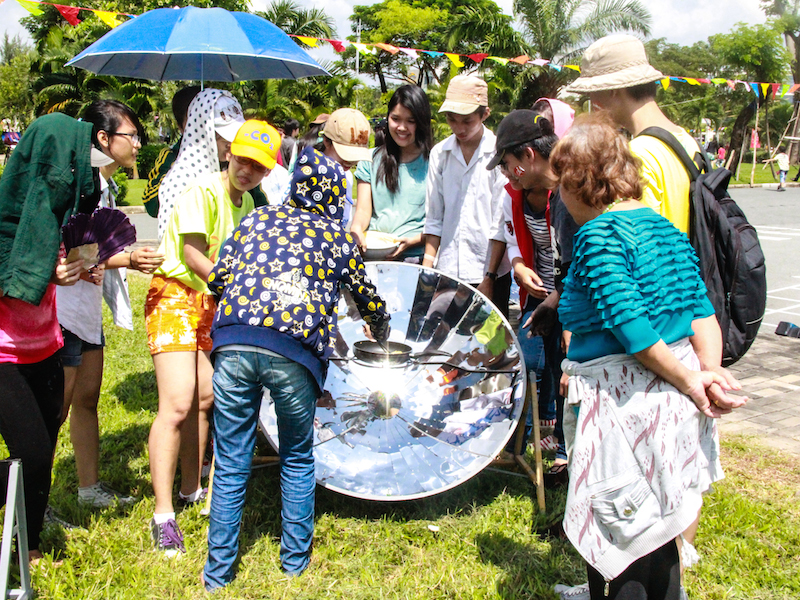 When asked whether she feels like she’s fighting a battle that can’t be won, Hong replies: “Sometimes I feel depressed. But then I look at the things I’ve achieved and I know for sure things have changed. When I talked about climate change in 1997, people looked at me like I was an animal; they didn’t know what I was talking about. 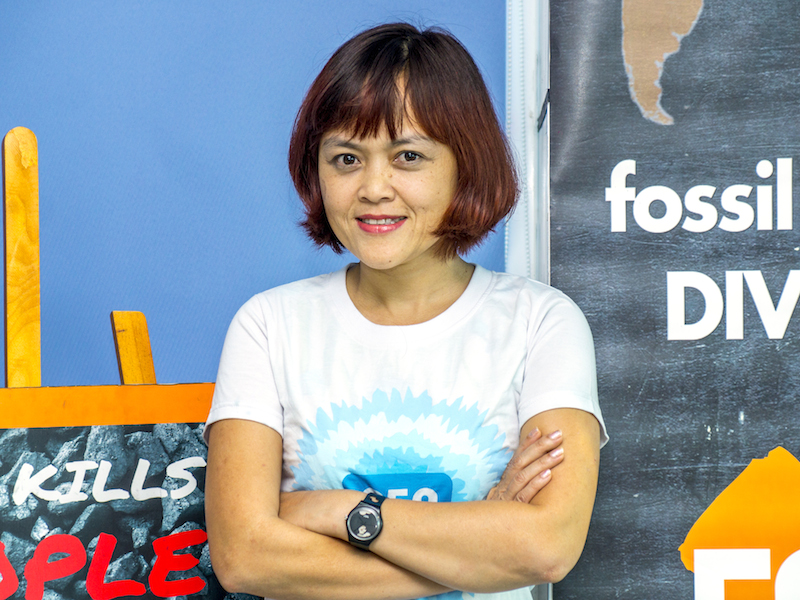 “But now, everyone is talking about climate change. The same with renewable energy. At first, it was very difficult to mobilize just 50 volunteers. Now I have 10,000. The young people are not stupid like the older generation, so there’s hope. 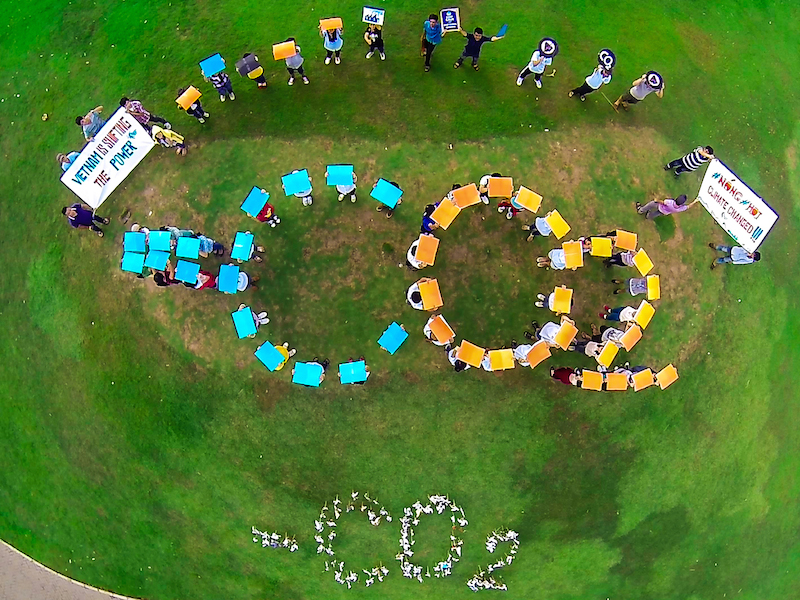 “One day, my son, who only cares about computer games, came home from school and said that rhino horn is just like fingernails. I never told him about that. The singer Thanh Bui came to his school to talk about it. Things like that make me want to continue to do things for him and for his friends. It’s too late for my generation. Our work is now for the children.”