Where the faithful worship among the tourists

It’s minutes before noon when a flurry of arrivals stir people from the blistering heat. Monks draped in flowing white robes, along with nuns and priests, stride across the baked asphalt to the airy relief of a vast temple in southwestern Vietnam. Visitors slip off their shoes and enter through a side entrance, curious about the coming ceremony of Vietnam’s third biggest and perhaps most intriguing religion, Cao Dai.

Four ceremonies are held daily at the sect’s headquarters, The Great Temple, or Holy See Temple, four kilometers east of Tay Ninh in the village of Long Hoa near the Cambodian border. The collage of vivid paints illustrating a mesh of philosophies in the temple become flecked with colorful garments of worshippers during praying masses every six hours throughout the day and night. Before climbing the stairs to the tourists’ stand, I comment to a monk on the impressive number of young followers here. “When they’re 18 they follow what their parents follow,” 62-year- old Uncle Bhai replies. “As soon as we grow up we find the passion of bringing truth to the religion.”

Formally established in 1926, Cao Dai has five million adherents and the one tricky aim of uniting all of humanity through a common vision of the Supreme Being. Figurines of Jesus, Confucius and Buddha hang above a large blue dome that shows one imposing eye staring out. Cao Dai, which means “High Tower,” incorporates aspects of Taoism, Confucianism, Buddhism and Catholicism, Judaism and Islam. Its saints are diverse and include Muhammad, Julius Caesar and Joan of Arc. God is represented as the ubiquitous Divine Eye, an eye in a triangle, and appears across the temple’s facades, centered between patterned twines of red roses, as well as the dome. Upstairs a group of five young followers are tuning two-stringed fiddles and a two-stringed guitar, known as dan kim in the south. A choir of women surrounds the musicians. Tourists begin to pile up, about 20 at first and then more. We all stand above the long hall facing two rows of pink columns wrapped in swirling green dragons, creating the impression of candles sticking out of an elaborate birthday cake. The ceiling bulges out into several domes painted as skies with green and pink dragons dancing among the fluffy clouds. It’s a pagoda, a church, a mosque, a psychedelic meeting of the world’s religions.

Graham Greene helped introduce Cao Dai to the West in his book The Quiet American. The main protagonist describes the scene in front of me as “a Walt Disney fantasia of the East.”

We hear a drum beat.

A priest dressed in yellow walks toward the dome followed by an array of clergy in three colors: yellow represents Buddhism, blue for Taoism and red for Confucianism. They sport different hats shaped like cylinders and shovels. The musicians and choir are in full swing now and tourists squeeze against each other to get the best photograph of the worshippers prostrating below. 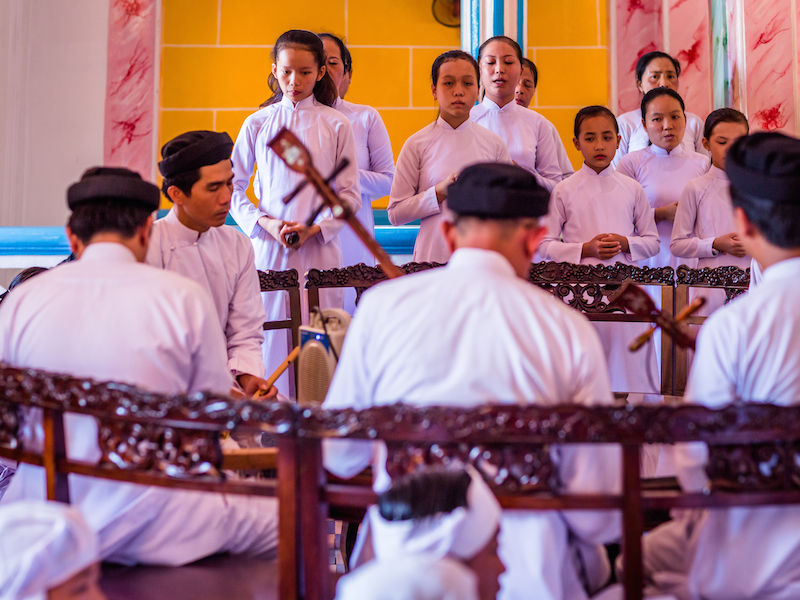 The temple, built from 1933 to 1955, has balconies running parallel to the hall. These were recently packed with tourists, affording people more space, however they’ve been closed off due to the weakening structure. Visitors should get here in plenty of time if they want a good vantage point for the beginning of the mass.

Young women who sit in a meditative stance upstairs snatch glimpses at the tourists. One of them picks an insect from her robe and places it on her neighbor’s lap. They begin to giggle. Incense fills the air.

The most senior priests have sat down near the end of the hall, which is divided into nine sections by shallow steps, representing the nine steps to heaven. Worshippers attain each new level depending on their years as Caodaists. The religion seems to be egalitarian although all the high-ranking priests in the temple are men. Followers adhere to the ethical precepts of Confucianism, which prioritizes relationships – sovereign and subject, parent and child, elder and younger brother, husband and wife, and friend and friend. It embraces Buddhist theories of karma and rebirth and the ecclesiastical hierarchy of Roman Catholicism. The first and only Cao Dai pope was Pham Cong Tac who died in exile in Cambodia in 1959. 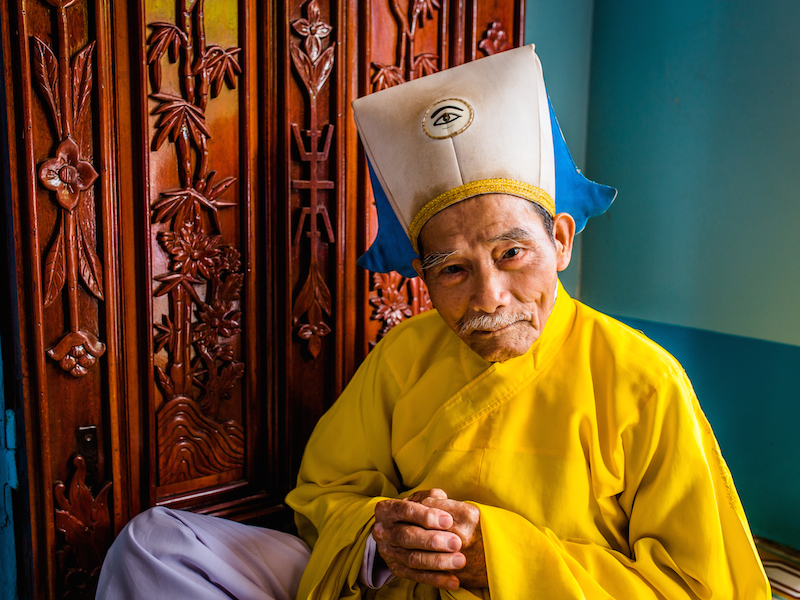 Taoism, the other largest building block of Cao Dai, lends its philosophy of two balancing forces in the world, yin-yang. It champions health and vitality, or as student priest Quoi Bing, 25, puts it before the ceremony: “In Taoism you try to reach the perfect person.”

The religion also draws upon occult practices from Taoism. In fact, Ngo Van Chieu, a civil servant for the French in Indochina, created the religion after he spoke of receiving word from God during a table-moving séance in 1919. Chieu became the first prophet of the religion and Caodaists believe this ushered in Tam Ky Pho Do or the Third Period of Salvation. Promising (although dead) historic figures imparted their wisdom through the séances until the practice was banned in the 1970s. 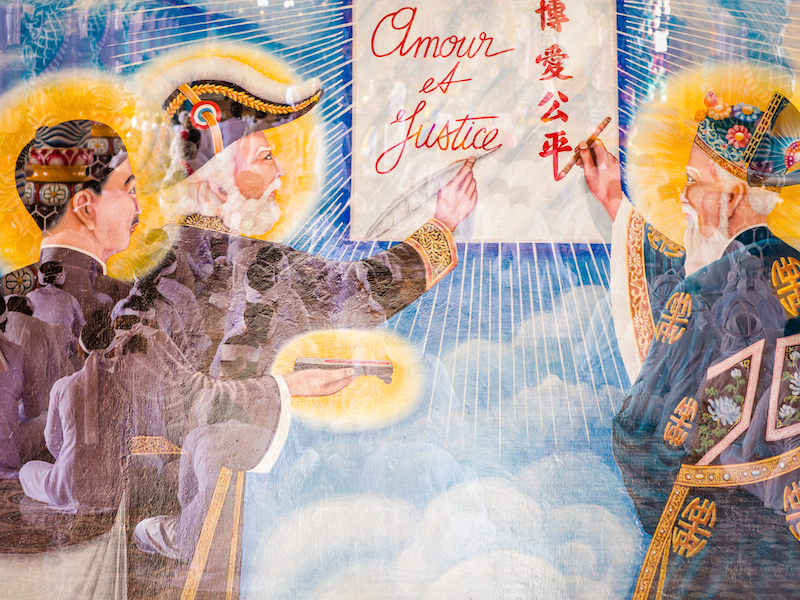 Many of these figures were heralded as saints, such as Victor Hugo (1802–85) who was said to have made regular contact with Caodaists. He now holds the title “Spiritual Chief of the Foreign Missions” of Caodaism and features alongside Chinese revolutionary leader Dr. Sun Yat-sen (1866–1925) and Vietnamese poet Nguyen Binh Khiem (1492–1587) in a mural at the temple’s front entrance. Dr. Sun Yat-sen holds an ink stone while the other two write “God and Humanity” and “Love and Justice” in Chinese and French. These are the three signatories of the Third Alliance between God and Man – the first two being Moses and Jesus.

After 40 minutes the high-ranking priests walk back out into the heat. One of them is the husband of Duong Thi Chi (pictured below), 54, who benignly guards the front entrance, making sure tourists do not accidentally stray into the main hall. “This is the cradle of religion,” she tells me, with the help of translator and Buffalo Tours guide Son To Lake. “This is not collecting pieces of a religion. This is the first time God set up a religion to reunite all together and to help each other.” 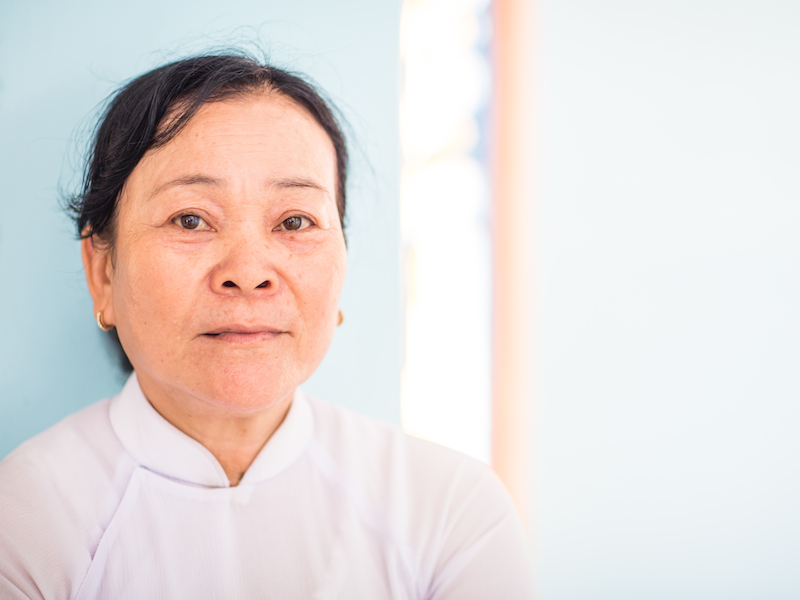 We sit down cross-legged at the entrance and chat. Duong, whose white clothes and yellow armband give the impression of a very pious bouncer, is a street vendor during the spare time she has away from the temple. She attends three ceremonies – 6am, 12pm and 6pm – daily and practices vegetarianism at least 10 days a month to purify her body and spirit and to avoid killing living beings in accordance with Confucianist ideals. Her meat-free diet normally exceeds 10 days because she cooks for her husband whose position requires a full vegetarian diet. Her children, a son and daughter in their 20s, work in a nearby factory and also follow the religion.

“We have had support from God who has blessed us. Our business is getting better,” she says. “The religion passes down from generation to generation. Cao Dai will not last forever but we have our own calendar, which goes up to 700,000 years. There’s only 90 years gone so far. Nobody knows what will happen after that.”

I ask whether she thinks the tourists are a disturbance. “I feel happy to welcome the guests. “It is part of the duty of our religion to spread the word about it so we do not feel bothered by people coming to see the ceremony.” She’s right. All the followers I’ve seen have been ready with a smile. 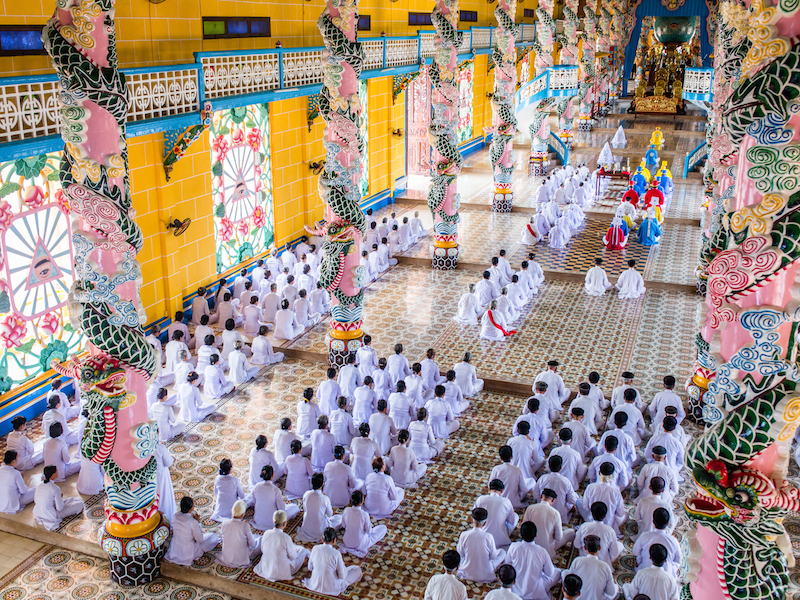 About 20 minutes later the rest of the worshippers trickle out of the temple, touching their faces as a final act of reverence before exiting into the well-maintained 188-acre complex of administrative offices, temples, dormitories, a hospital of herbal medicine and a large area for religious processions. For such a modern religion Cao Dai has had a heavy load of turmoil. Contradictory to its principles, it established an army in 1943 during the Japanese occupation of Indochina. In the following years it rapidly expanded its membership, eventually becoming a dominant force in politics. It opposed the French, and then broke a deal with them before opposing again.

To quote The Quiet American again, the protagonist describes the Cao Dai militia as a “private army of 25,000 men, armed with mortars made out of the exhaust-pipes of old cars, allies of the French who turned neutral at the moment of danger.”

By the early 1990s Cao Dai was reported to have some two million adherents in Vietnam, Cambodia, France and the US. Worshippers here pray the current peace will continue and as I stroll among the medley of colors once the ceremony has finished, listening to the sound of chirping birds on the roof, I can see why others would like to see it flourish here in its home of the Mekong Delta. 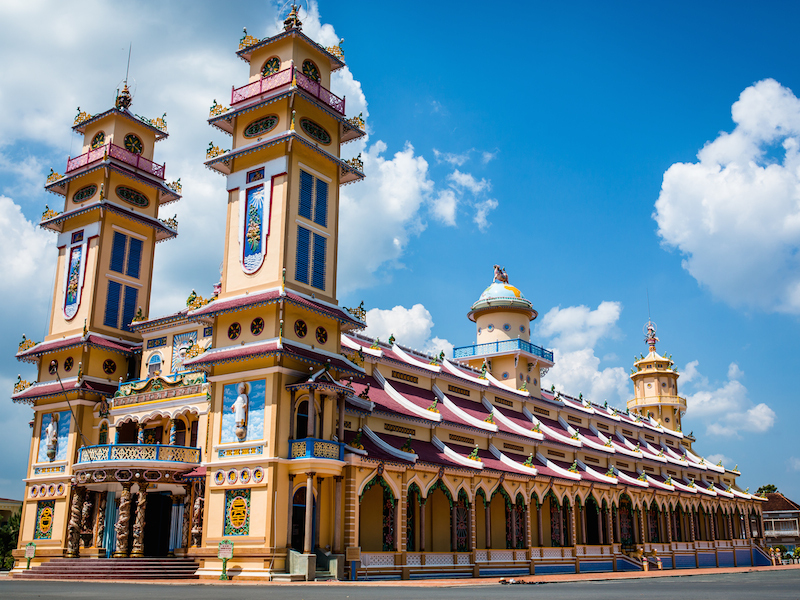 A trip to witness the ceremonies at the Holy See Temple in Tay Ninh can be booked through Buffalo Tours +848 3827 9170.