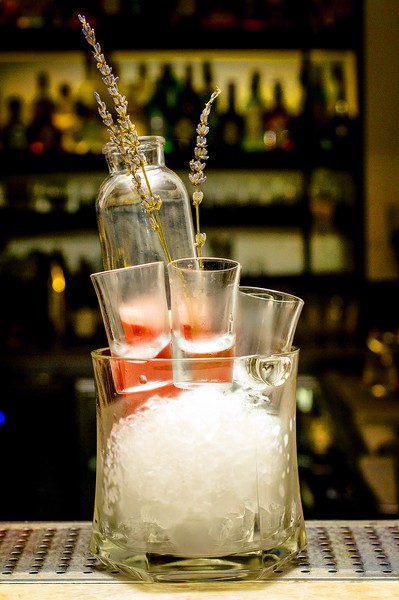 Let me tell you how to get into the ‘in’ club in Saigon. First, wander down Ky Con past all the squalid hardware stores, then slip inside the old colonial facade at number 37, and take your position at the bar alongside all the other beautiful people who’ve discovered the city’s latest diamond in the rough, Saigon’s Lookout (37 Ky Con, D1). Seemingly designed solely to be as freaking cool as possible, the venue is a destination-from-scratch that serves as a restaurant, gallery space, whisky & gin bar, and intimate nightclub for the young and the creative.

Officially launched last month by its seriously stylish owner – international photographer and fine artist Olaf Mueller – the venue manages to consciously convey a consistency of concept and attention to detail that breathes visual and culinary art. Intended both as a hub for networking artists and an outlet for the artistic flair of its owner and its young, energetic staff, Saigon’s Lookout is perhaps the city’s first true underground supper club, an enclave of fine dining for the famous, the fabulous, and perhaps the otherwise curious.

While the restaurant is still new, it shoots for a personal touch so as to generate a sense of community. You’re likely to bump into Olaf himself at the bar – he’s intent on building up the service to the point where regulars can sit themselves down and be welcomed by name, their ‘usual’ served right on arrival. Relax and take some time to enjoy the specialty cocktails (all VND160,000) – they’re the result of in-house experimentation with local fruits and flavors set off against international standards. While the hands- down popular favorite is the Litchi Chilitini, which is a vodka-based tropical heatwave in a martini glass that carries a serious burn, you may also be tempted by the Berry Sensitive – a fresh concoction of berry juice and a splash of sprite with light and dark rum for the kick – or the Saigon Summer, a take on local streetside botanical drinks with cucumber, lychee, gin and ginger ale. If the drinks menu seems fairly colorful, it’s part of the overriding aesthetic that influences everything on the menu – which Olaf calls the “twist.” Rather than aim at straightforward fusion recipes, SL’s chef Hoang has been given license to break new ground with ‘twists’ on every dish, experimenting with various cooking traditions, ingredients, and a range of Asian tastes. 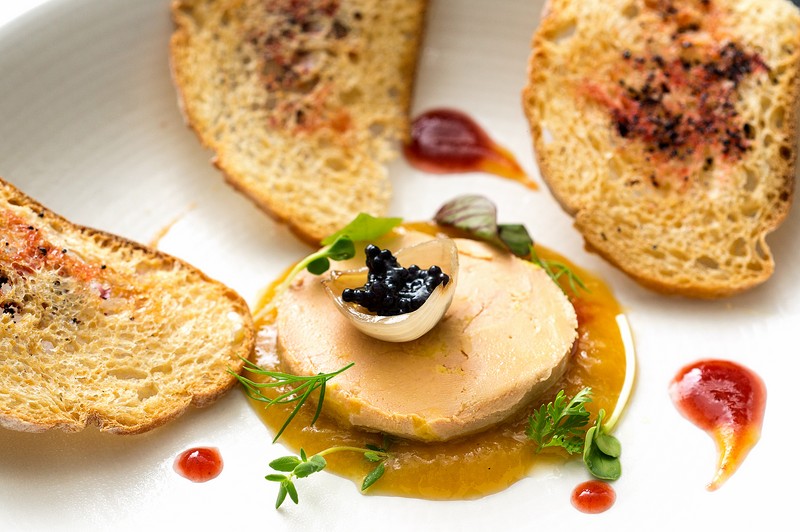 At a venue where creativity seems to be permanently dialed to 11, you can expect your meal to be extraordinary right from the first dish. We started with a pairing of two polar opposites – a tom yam bisque (VND110,000), with all the hot and sour tastes of the classic Thai staple cleverly blended with the creaminess of a French seafood soup. Following on, the foie gras terrine (VND380,000) was enthusiastically presented as a blend of two distinct and contrasting preparation techniques and served with a subtle Hue apricot spread rather than the typically sweet fruit sauce – and with a crown of caviar placed on top almost as a flourish of jewelry. 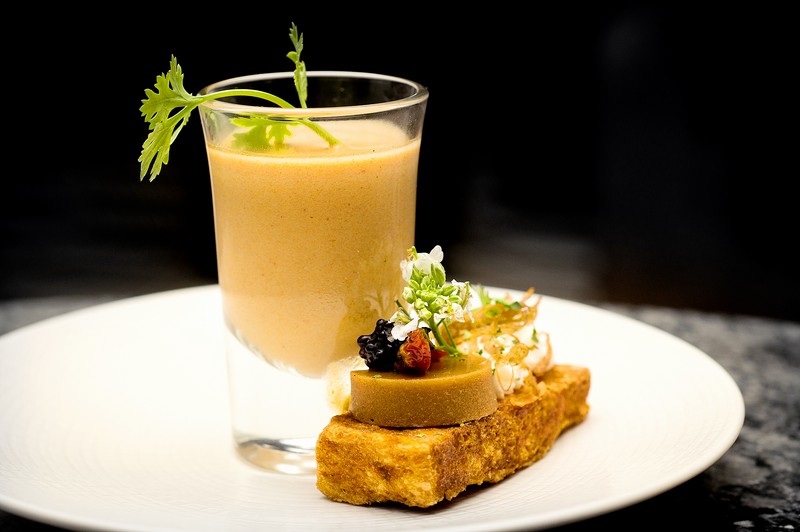 For main courses, Saigon Lookout’s kitchen starts from a Vietnamese base and looks outward to other Asian traditions. A good example is the countryside salad (VND120,000) which is somewhat like a rocket salad – although where some classic recipes would call for bacon or anchovies, SL uses a tastier snakehead fish cheek – and the central herb, known as pepper elder, is one that is fondly remembered by many local Saigonese. The dish swaps in century eggs to stand in for bland boiled ones, and the cracker of parmesan cheese and Vietnamese dried beef is so popular that this dish is often ordered for that feature alone. 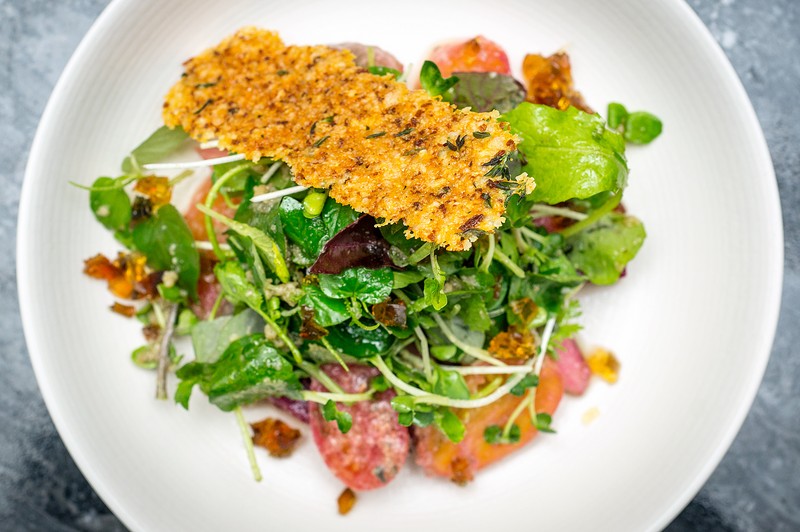 We enjoy a poached sea bass on a bed of creamy guisse leaf with brown rice and pumpkin flower (VND220,000), a take on a northern dish cooked sous-vide to retain the flavor and fried in milk and cream. It’s straight comfort food, immensely easy on the palate – while the duo of pork leg & pork belly with mixed bean ragout and pickled mustard leaf (VND250,000) is more of a welcome challenge. The chunks of pork are very reminiscent of Saigon circa 1976 when trays of braised pork and bread were carried on the shoulder by vendors across the city – anyone who’s lived in Vietnam a while should know that taste. Paired with a distinctly Indian fennel-based mustard, it is very pleasantly aromatic and one of the most unique items on the menu. 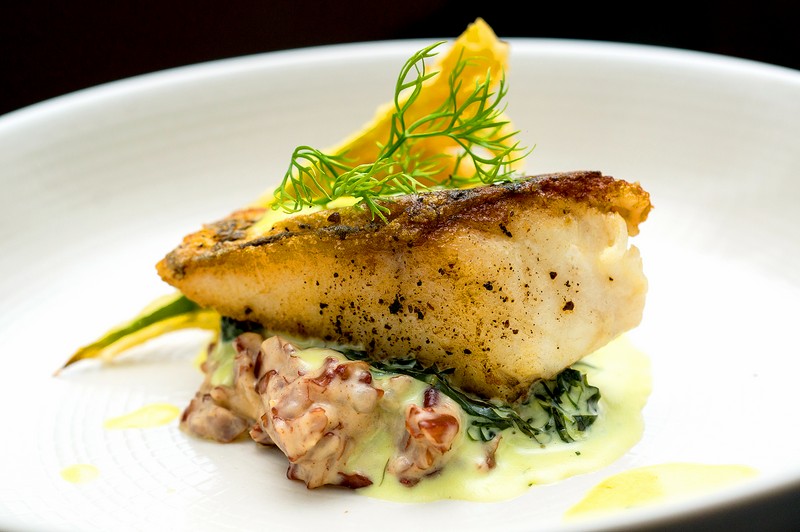 We polish up our mains with the beef/ short rib with Vietnamese-style ratatouille (VND280,000). It’s the only concession to imported ingredients – the beef is sourced from Australia/New Zealand because of the way the meat stays fresh and pink. It’s beautifully tenderized with a tamarind & fish sauce in beef gravy, and served with pepper elder on a potato mousseline. 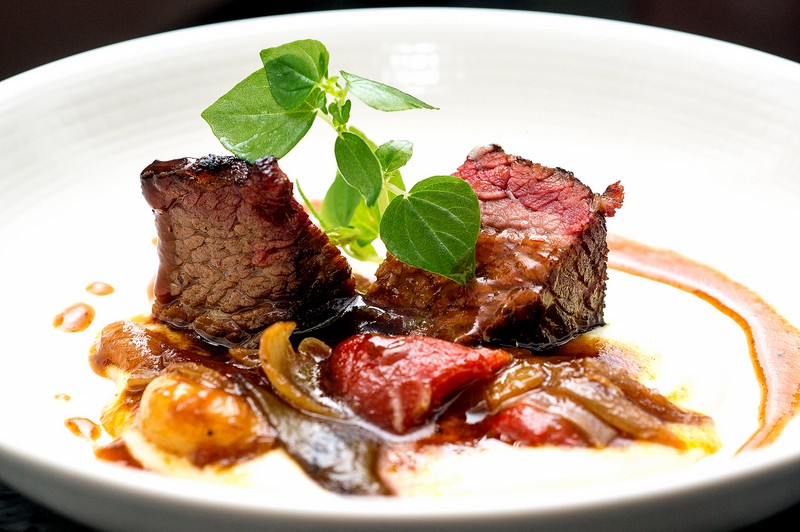 You’d be correct to presume that Saigon’s Lookout saves its best surprises for last. While an intriguing tom yam ice cream is available, we went for a variety made with Phu Quoc myrtle wine (which tastes similar to a good port) and tangerine peel ice cream (VND100,000), deliciously exotic with a side of sweet potato and braised pear. We followed up with one for the road – a smoky sin shooter (VND120,000), all fresh tropical fruit juices soaking in gin and infused with lavender smoke that hits all the senses at once. 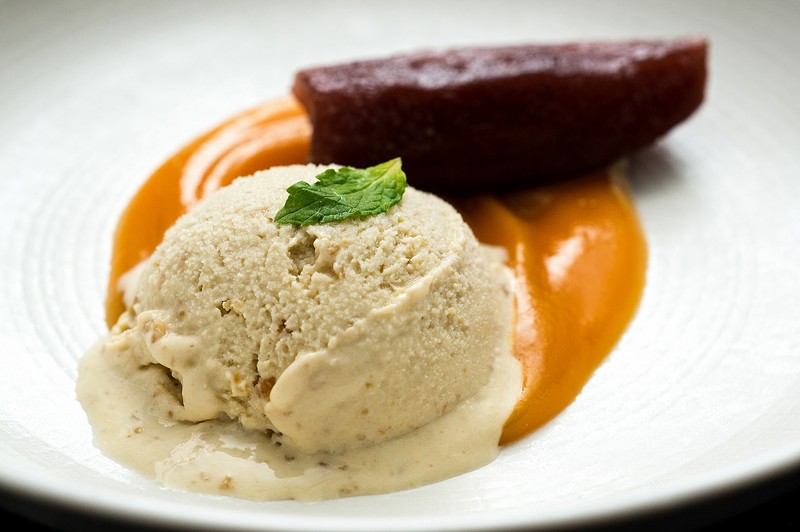 If you just want to stop by for lunch, Saigon’s Lookout has an equally interesting menu on offer – with feature items based on the beloved hamburger, but with a distinctly Eastern take without tomatoes or lettuce. Essentially, the dishes and décor both are reflections of the humble elegance that serves as the heart of this impressive and yet unpretentious venue – it’s open to all, but try not to be too boring when you get there, or you may just miss out on the whole vibe. 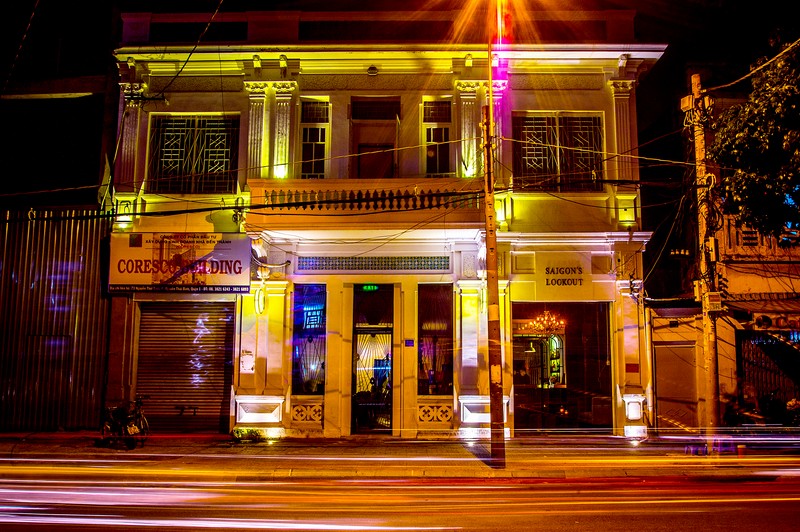 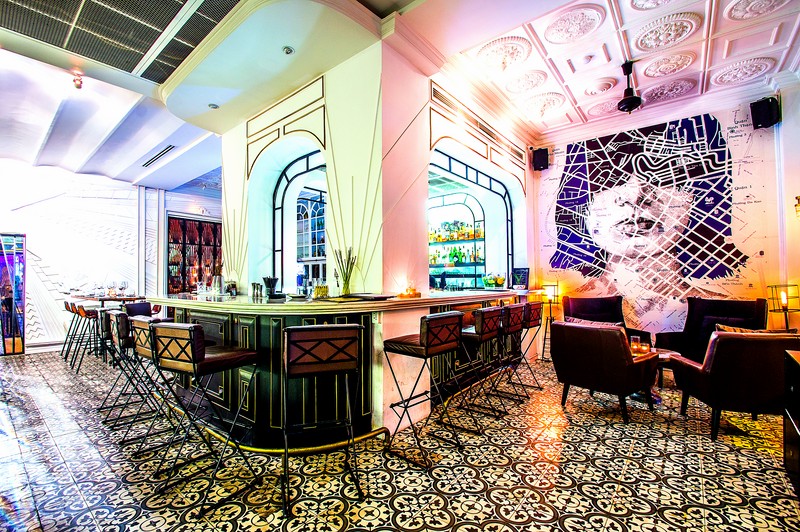