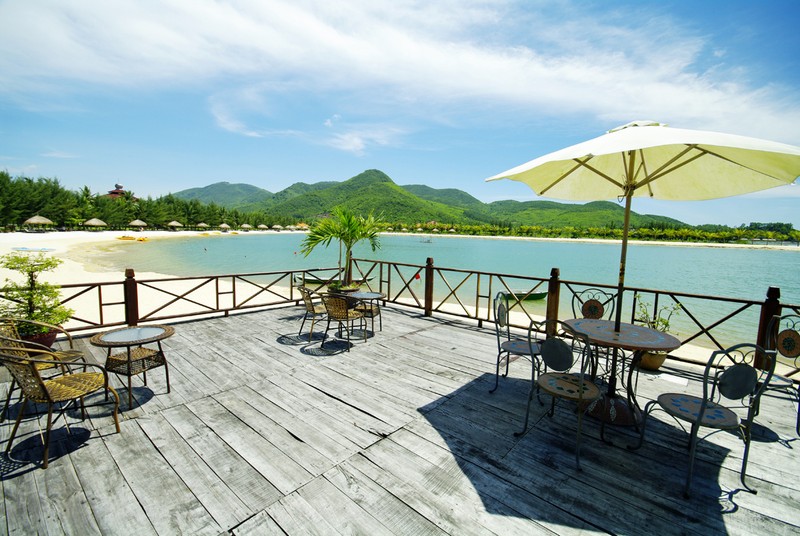 The year was 2008. Barack Obama became America’s first Black president, Usain Bolt took home the double-double and Michael Phelps racked up eight gold medals at the Beijing Olympics and No Country for Old Men cleaned up at the Oscars.

That year also marked Diamond Bay Resort & Spa in Nha Trang putting Vietnam on the world’s radar for hosting the 2008 Miss Universe pageant in its colossal Crown Convention Center. The first major US-based television production to take place in Vietnam since the end of the war, the brand-new resort welcomed hosts Jerry Springer and Melanie Brown (aka “Scary Spice”) and featured a fresh-faced, 21-year- old Lady Gaga debuting her hit single Just Dance for a televised international audience, launching her global domination. The rest, they say, is history.

Fast forward to the present day, and while other newer, glitzier hotels have stolen some of Diamond Bay’s limelight, the property has still got the “it” factor, being one of the first to stake a claim to the shoreline halfway between Cam Ranh International Airport and Nha Trang proper. The more than 14 hectare property boasts a long list of “Biggest (fill in the blank here) in Nha Trang”, including the biggest swimming pool (free form and hugging the bay at 3,000sqm) and the largest convention center in Vietnam (with seating for 7,500) and additional Banquet Event Halls with seating capacities of up to 1,000 as well as conference rooms for meetings and smaller presentations. 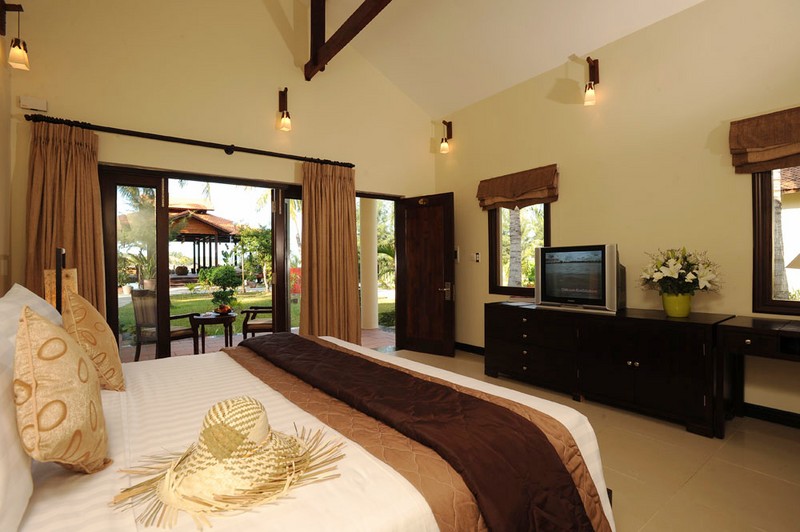 Sleep
I’m staying in a Diamond Ocean Bungalow, named “Miss Argentina,” one of 164 bungalows scattered around the lush gardens, half with sea views and some with steam baths and Jacuzzis. The room is a spacious 68sqm, simply but tastefully decorated in tones of brown and gold. It’s when I throw open the bathroom door that a gasp escapes me at the sight of a gigantic granite sunken bathtub next to a shower underneath a huge skylight, palm trees fluttering in the wind, bringing the outdoors in. The resort also has 176 rooms in four 3-storey hotel blocks spread out over the property, all connected by wide, beautifully landscaped paths.

Swim
Nha Trang’s white sandy beaches have been immortalized in song, and Diamond Bay Resort & Spa has not one, but two stunning bays to call its own. The beach right on the property is adjacent to the massive swimming pool, but it’s actually Nhu Tien Beach, a complimentary 5-minute shuttle ride away, that’s the jewel of this complex. If Nha Trang’s city beach can be likened to Hawaii’s Waikiki with its fun vibe and nearby shopping, restaurants and tourists galore, Nhu Tien is more than an adequate substitute for the quieter, more picturesque Kauai or Maui, a gorgeous stretch of bay lined with palm trees and backed by verdant mountains. Nhu Tien Beach is managed by the same parent company as Diamond Bay Resort & Spa and there is a dedicated area for resort guests complete with beach huts and loungers to while away the day. (Tip: Nhu Tien Beach is operated on a cash system, so remember to bring enough for drinks and snacks and beachside massages. Also, grab a towel from the pool before you head over.) 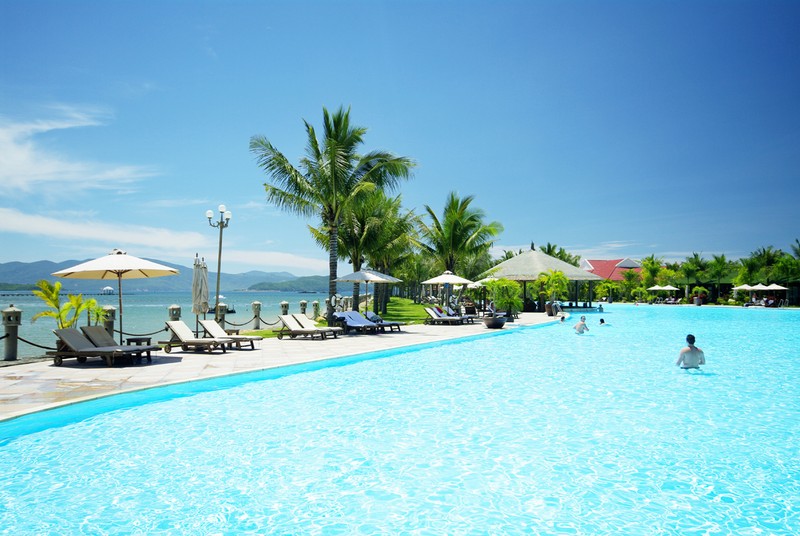 Eat
Even with the many restaurants of Nha Trang just a 20-minute complimentary shuttle ride away (available 5 times per day), why bother leaving the resort when there are five restaurants on-site to cater to every taste? Rosy’s, the 500-seat open air restaurant serves up buffet breakfasts and dinners and hearty set lunches (both Western and Asian menus), whereas Banana Leaf is perfect for mid-day snacking as it’s just by the pool with pizzas, pastas and Vietnamese-style paninis stuffed with roasted pork among other sandwiches to accompany the cocktails from the swim-up bar. The upscale Vista Grill House makes for a beautiful dinner venue, serving up grilled seafood and Australian and US- imported meats at reasonable prices (think: 200gr of Grilled Australian Beef Rib Eye for less than VND300,000) whereas Omai Restaurant features traditional Vietnamese with favorites like Papaya and mango salad with seafood and Grilled prawns with honey and garlic. However, resort guests soon discover that the Sandy Bottom Restaurant is the place to be on Monday, Wednesday and Friday nights for an all- you-can-eat seafood BBQ. Some things just taste better in situ, like a baguette in Paris or Pad Thai in Bangkok. At Sandy Bottom, seafood has never tasted as good as when there’s sand between your toes on a private beach with a live band churning out the hits alternating with high-energy fire dancers. 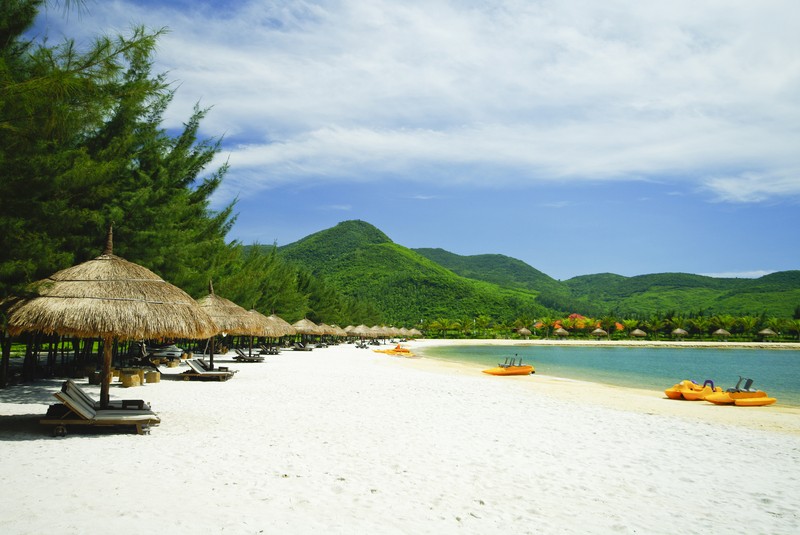 Play
From hunkering down with the summer’s latest best-seller on one of the two quiet private beaches to playing a round at the 76 hectare, 18-hole golf course on the adjoining property to seaside tennis courts and complimentary yoga, kayaking or aerobics, there’s something for everyone at Diamond Bay Resort & Spa. Beach lovers will appreciate the wide range of water sports on offer including jet skiing, banana boating and snorkeling, whereas land lovers can find bliss with a Purva Karma Four Hands Synchronized Spa treatment in the serene Song Lo Spa or perhaps even a day soaking in healthy mineral mud at the 100 Egg Mud Bath, also managed by the same group.

It’s rare to find a resort in one of Vietnam’s most popular beach destinations that has so much room to spare that it gives off an island vibe all its own, no matter how many guests there are. With one of the best locations on the Nha Trang coastline, far from the madding crowd, Diamond Bay Resort & Spa is like a vacation within a vacation. 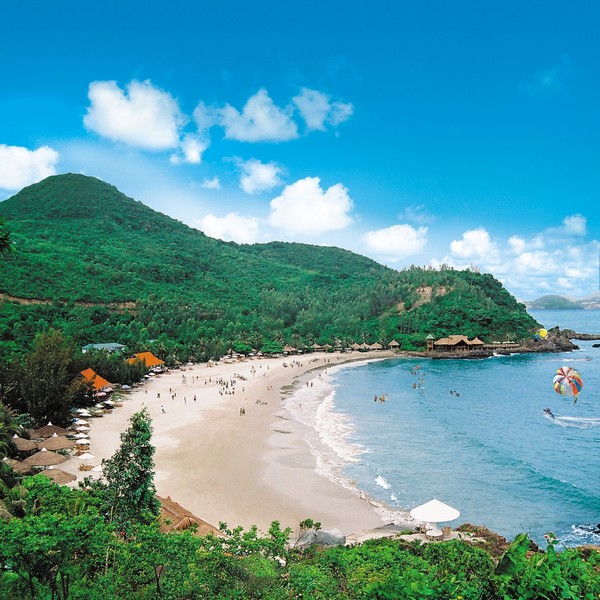