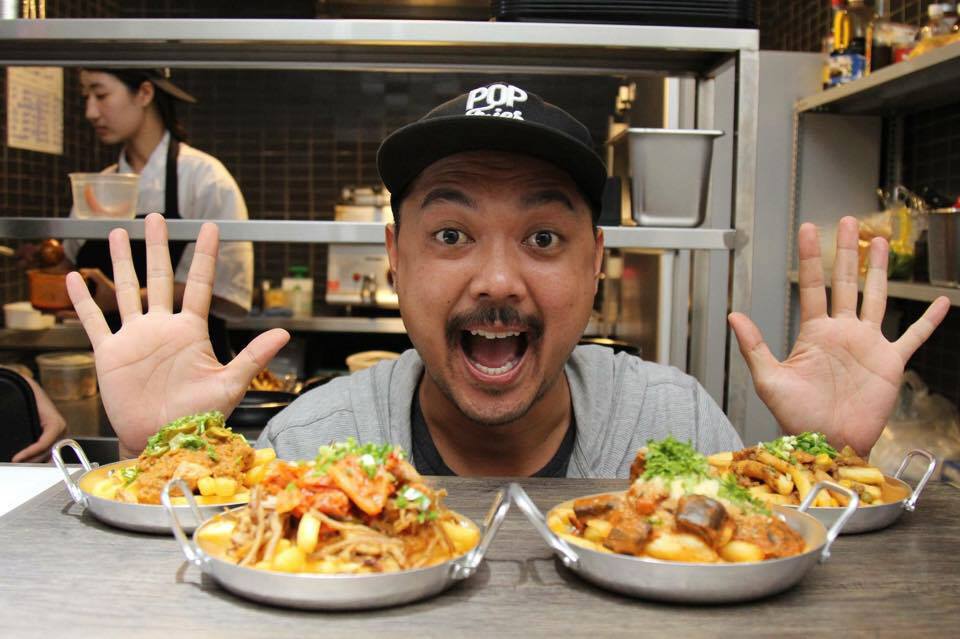 Without knowing that Majik Gold Agency’s Calvin Bui spent five years cheffing back in the States, you probably wouldn’t expect to find him running what could be mistaken for a hipster fast food joint on the fringe of Thao Dien. Normally working with characteristic exuberance in talent management, promotions, and brand activation with celebrity magician Petey Majik, Calvin’s decision to establish Pop Fries (14M Quoc Huong, D2) came about as the result of a dare.

“This whole premise came from my business partner, at that time my friend”, laughs Calvin. “He said, ‘I challenge you to create a restaurant concept with just one ingredient’ – and I said, ‘Challenge on!!’ I sat around and thought about what I could do. I eventually hit upon fries – how can I make fries something that’s my own, in Vietnam? The Canadians have poutine, the French have everything potato, and in Asia, you have a lot of sauces. So I just tried to create something layered.” 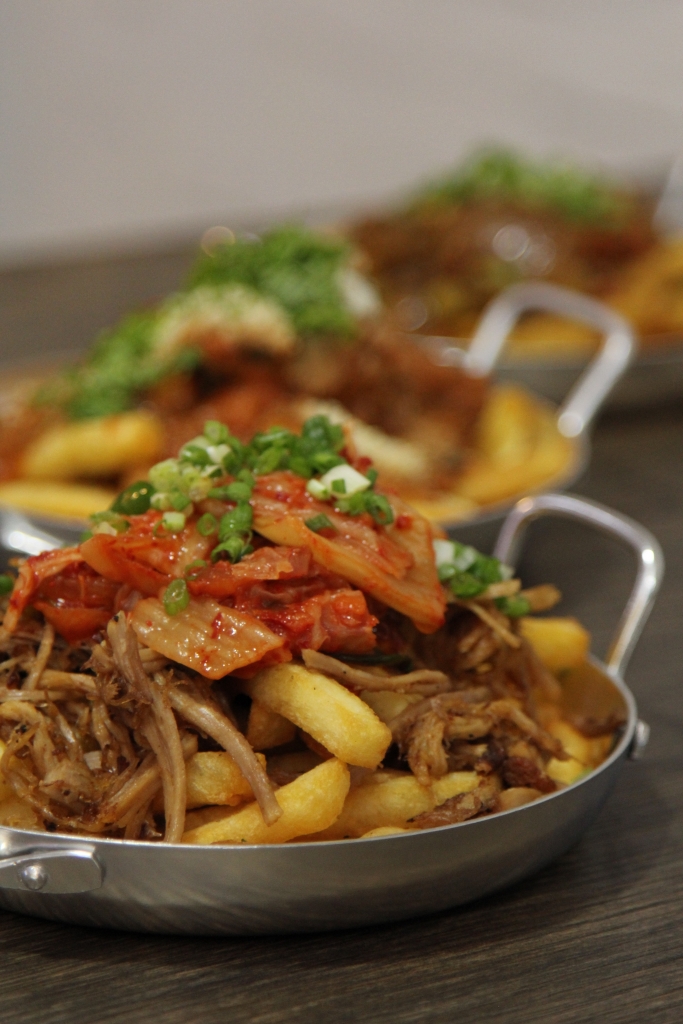 The result is a local version of American loaded fries – a popular Los Angeles/New York street cuisine trend that has seen something of a renaissance in the States in recent years, although transformed here into a hybrid gourmet snack attack, blending exotic Eastern flavors with a familiar, crispy French-fries base. Calvin’s microscopic menu features just four variations on this theme – Japa fries, sporting a gravy of Japanese curry; Loca Fries with chicken breast and tomato salsa; Korilla fries with Korean pulled pork & kimchi; and Parma fries, a vegetarian offering with eggplant and tomato cream sauce. All the toppings are made in-house; they’re fresh, and they’re designed to make the fries as different as possible to servings elsewhere so as to distinguish them as a dish of their own standing rather than a side to some forgotten main course.

That’s the obvious question, though – to what extent can a plate of chips pass as a meal in its own right? How will the elite crowds of District Two react to a dinner venue with such a tightly-focused offering in a part of town not exactly wanting for fine Western cuisine, let alone deep-fried snacks taken with plastic forks on bare communal tables?

Calvin makes no pretensions about Pop Fries – the community vibe and laid-back atmosphere are key elements to the store concept – with the more important issue being at what point do the servings become too much. If you’ve ever taken home a pack full of crispy hot greasies for diner and immediately regretted it after the last stone-cold oil-sodden bite, you’ll know what he’s talking about. 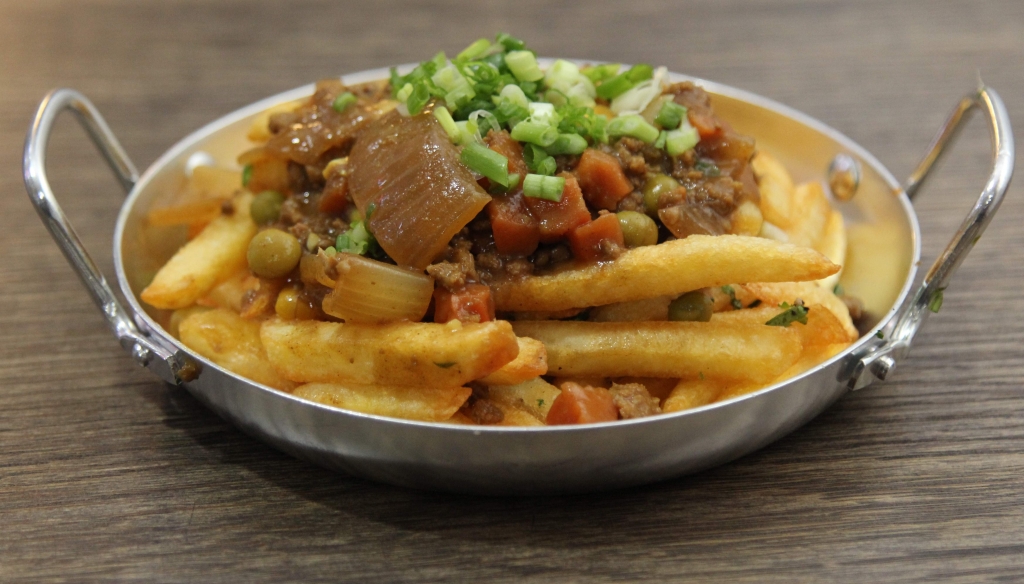 “I’ve heard a lot of times people saying, I thought it would be a lot bigger”, he admits frankly. “You know what, at the end, if you eat one of these, for three hours you won’t need anything else. But you know what I say to myself? I say Calvin, eat less. You want to see 65-70? Eat something less. Before I tried 300, 400 grams of potato. Then it just becomes this heavy thing… is that what we really want to put up? Do we want people saying, ‘I just had Pop Fries, I just want to go to sleep now?’ I do want people to finish, I do want people to feel satisfied, but of course what I would really love is for two people to share three of them. So they have all the flavours.”

If the food focus is more on the garnishings than the staple, then the venue focus is more on good spirit than any kind of put-on pizzazz – and Calvin has built the concept with the potential for multiple store locations in mind. “I built this location to be based on the Thao Dien community”, says Calvin. “No one in Tan Binh or Tan Phu will drive an hour to eat French fries. But when I do go in Tan Binh, it will be built around Tan Binh, for Tan Binh. Then that way we’ll know that I’m supporting my hyper-localized community, who support me in return. I don’t market to anybody else but the Thao Dien businesses, families. the schools, the social clubs, the ladies.” 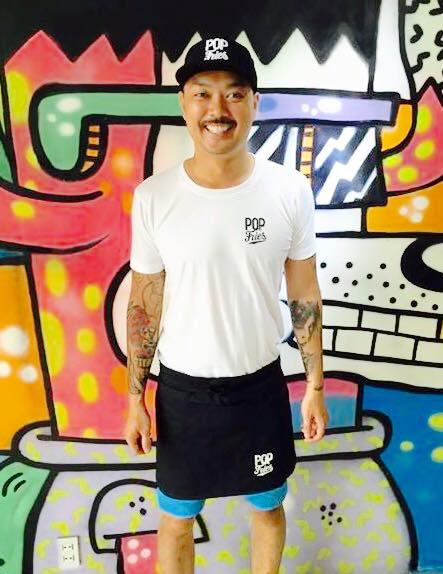 “I’ve been here for six years”, he reflects. “I don’t have a place to have beers and hang out. A coffee shop is too ‘café’, a bar is too smoky, a dive bar’s cool but then you lose track of what you actually do there. I just want to sit down and have a conversation about what’s going on in our lives. Share. And at this price point and with this speed in service, you can get in and out in an hour.”