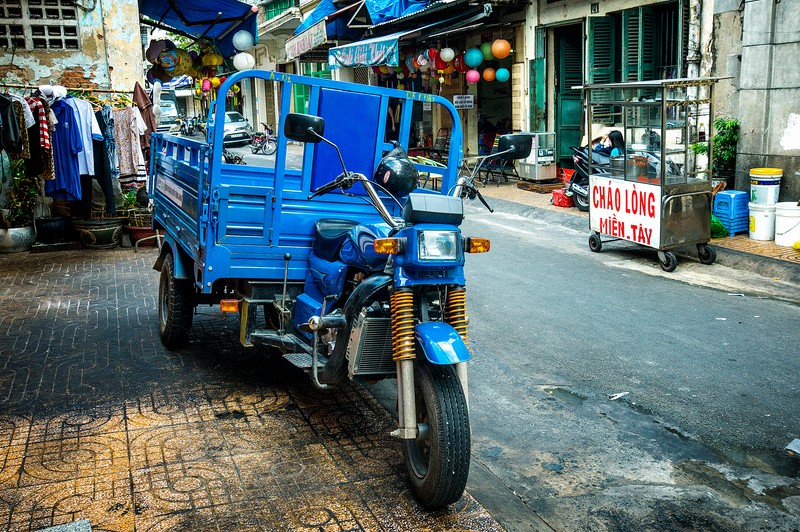 “I’ve been driving a xe ba gac since reunification,” says 59-year-old Ut. “I used to work for a company contracted by the government; I made saw blades that were used to cut down trees. The pay was good, but I had to move around a lot, living wherever there was work, and I didn’t like it, and eventually the work dried up too. There was nothing else for me to do after the war, and my brother had a homemade xe lam (a smaller version of the xe ba gac, based on a scooter rather than a motorbike). I borrowed it until I was able to earn the money to buy it from him, and I have been riding up and down Vietnam ever since.”

It is a quiet morning for Ut, and he sits reading the sports newspaper with an ice tea, chatting with Sang, another xe ba gac driver who is tinkering with his machine. There is a friendly rivalry between the drivers. “It’s normal, there’s competition and you want to do well, but you make friends in this job. The group of us here, we’re all friends, and we generally meet here when we’re waiting for work. We have another corner, but the police seem to like that spot too!” 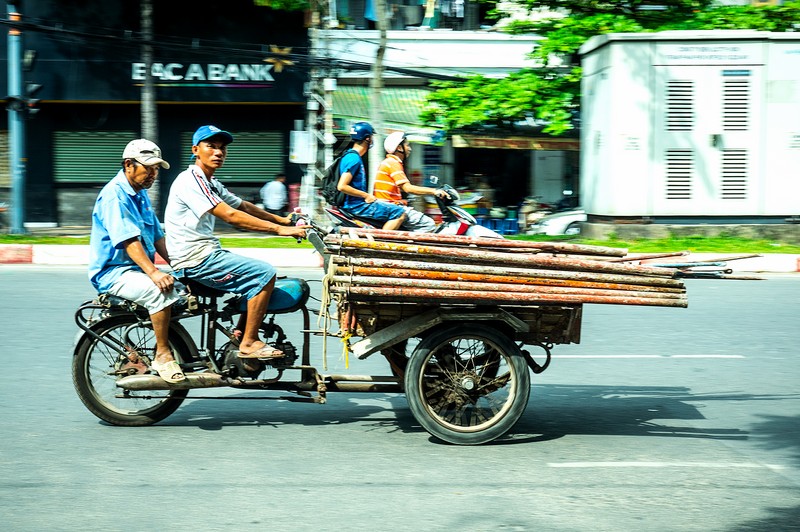 “I have a new bike now,” says Ut, gesturing at one of the blue Fushima vehicles parked on the street corner. “I bought it from a friend for VND40 million.” Home-made and converted three-wheelers have been banned in Vietnam since 2010 because the government considered them unsafe. Now drivers have to pay more for imported Chinese brands, and almost every xe ba gac you see is either a Jingpin or a Fushima, customized only for the driver’s comfort.

Ut’s problems don’t stop there. Recently, traffic cops have started pulling over three- wheeled vehicles because they are believed to cause traffic jams. “It’s at its worst in the mornings. Very often I can’t do any work because the police would stop me. If you get stopped by the police you have to pay a fine, normally VND100-VND150,000. It is a lot of money, and you don’t want to be losing that every day.” Despite the rivalry between competing groups of drivers, police presence brings the camaraderie of the profession to the forefront. “We warn one another by phone of where the police are and if they’re stopping us or focusing on the smaller motorbike transports. Nobody likes to be stopped and we aren’t out to get one another.”

Sang agrees: “It is hard work, but we can make up to VND300,000 a day doing it, as long as the police don’t take their share.” The pair laughs and declines when I suggest taking a photo of them and their vehicles. “We have enough problems with the police already.” The vehicles display their names and phone numbers – a wise decision. 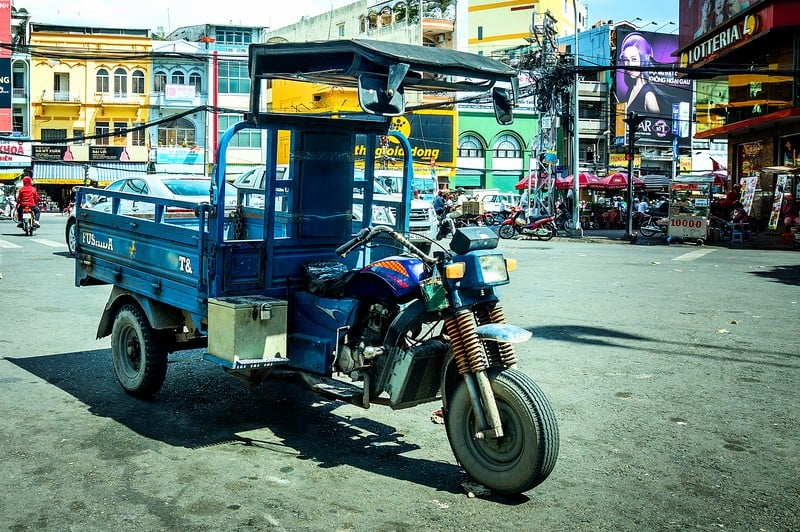 “I do this work because the pay is quite good. I’m not going to get rich, but it provides for my family and me. My wife works as a housekeeper which helps too, and the children do little jobs when they aren’t at school,” says Ut. He generally works in Saigon, but customers often require him to transport goods over far longer distances. “Quite often people want me to help them move house, or take furniture down to the coast. Sometimes they hand me a mystery box and a destination and I just keep quiet and do my job!”

It can take seven or more hours to drive to the coast, but Ut and Sang have the patience of true workmen, and are content to sit astride their machines for the long haul. “Sometimes I will ride all day to take a load up north and ride back during the night. It can be dangerous and it is very tiring, but the pay is good,” he adds.

Many of Vietnam’s traffic fatalities happen on the winding, unlit roads that connect Vietnam’s smaller towns, but Ut trusts his 40 years’ experience of driving across the country to keep him safe. “Sometimes, if it’s a customer we know, we will travel even farther. We have moved goods up to Hue, and that is a very long drive. For journeys like that we will set off in the early morning and arrive quite late at night. Then we’ll stay over at a motel or even sleep in the back of our xe ba gac before driving back the next day.”

Ut can’t see himself doing anything else, but is unsure if there is a future for the profession. “The government regulates us more and more, and I think xe ba gac may eventually be replaced. I will stay in the same job though, and just drive something else. People will always need help moving.”

“Would I let my children do this job?” Ut and Sang laugh, glancing at each other, “No, no, they are young now and still in school. Education is the most important thing, and when they grow up they will have better opportunities. I don’t want them to have to deal with the police every day.”