Welcome to the Third Dimension

A bucket seems to be filled with fast- moving goldfish, two turtles compete for space in a small white bowl and an octopus rests in shallow water. However, it is only on closer inspection that it becomes clear that these are clever optical illusions. Ever since Japanese artist Riusuke Fukahori’s 3D resin creations gained international fame several years ago, this 20th century art form has steadily gained followers and practitioners. Fukahori uses a complex process of poured resin to build his canvas. First, he pours a layer of resin, lets it dry, and then paints a small portion of the fish on top it, allows that to dry, and then pours another layer of resin, repeating this process until he makes a lifelike three- dimensional goldfish. With the clear resin looking exactly like still water, the end product is a stunning piece of hyperrealism that can easily fool viewers into thinking that they are looking at a real bowl with one or multiple goldfish swimming in it.

In Ho Chi Minh City, Choi Choi Studio (1st Floor, 7 Ngo Thoi Nhiem, D3), composed of three young artists, is attempting to both honor and branch away from Fukahori aesthetics by focusing on graphics and applied arts. Instead of Japanese wooden bowls, Nguyen Ba Thong uses traditional Vietnamese glazed porcelain bowls. Using the same technique popularized by Fukahori, they create paintings of underwater fish and forests. However, unlike Fukahori, Thong’s paintings are a unique blending of reality and fantasy – the use of bold colors and free-flowing lines gives the artwork the vibrant beauty of a traditional oil painting. 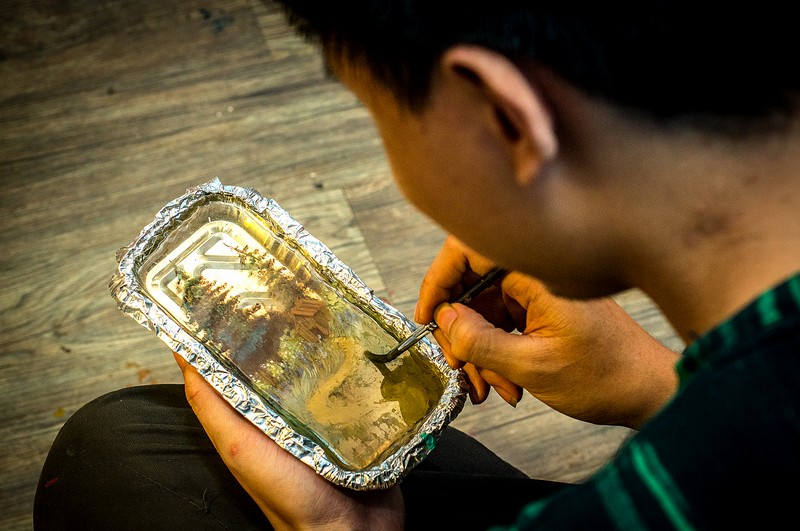 “We adore Fukahori. Like other resin artists, our first encounter with modern resin art was through his works. We learn from him and more often than not measure the quality of our works against his. There’s no 3D resin artist that does not know Riusuke Fukahori’s name. That said, however, we also want to escape his shadow as artists of a younger generation. Three-dimensional resin art is a medium and discipline – it does not necessarily have to follow Fukahori’s hyper-realistic aesthetics,” says Thong, a graduate of the University of Architecture and lead resin artist at the studio. The trio’s works are garnering attention amongst independent art collectors for their refreshing creativity and originality. 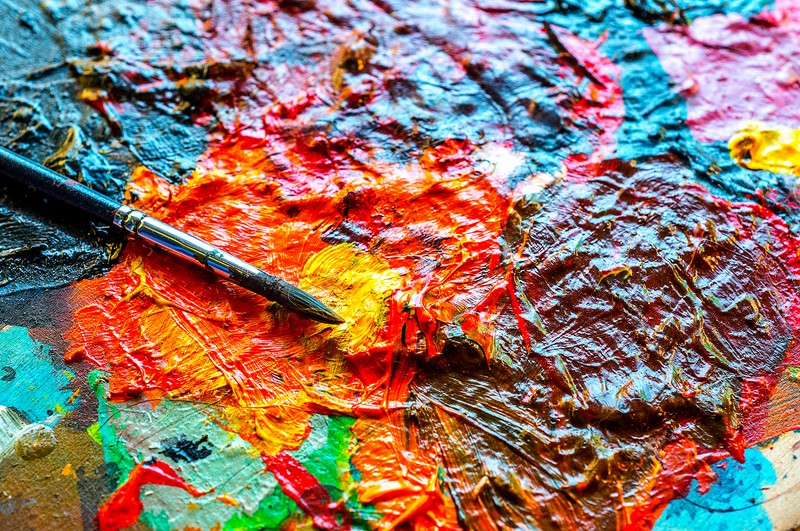 Thong encountered the medium after graduating from university a year ago. “I was bewitched,” he shares. “There’s this interplay between the real and the imagined. Because of its extra dimension, a piece of resin art can look incredibly lifelike… and yet it has the same creative potential as any abstract artwork. It can be as crazy as you want it to be, or it can be ordinary like a photo. Every artist renders the world of their imagination into their works, but resin art has that extra dimension that makes it so much closer to the world in our imagination. Every time I create a piece of resin art, it feels like I’m rendering a tiny world into existence.”

While working at a marketing company to support himself, Thong practiced resin art in the evenings, painting slowly and meticulously, leaving the paint to dry overnight before resuming work on it the next day. Each creation can take anywhere from two to four weeks to complete. Depending on the scale and level of detail, they can retail from VND2 to VN4 million.

According to Thong, the art form is not as hard as it seems. “The clear resin medium is new, but 3D painting is a technique I have learnt well in school. It’s demanding, but straightforward. The materials are not expensive even on a student’s budget, and can be bought at any art supply stores near the University of Architecture or the University of Arts. If you have gone through art universities, chances are you can teach yourself the technique fairly easily.” The tricky part, he says, is that the artist needs to develop an eye for three-dimensional images. “Many traditionally-trained artists can’t think in three-dimensions. They have trained all their lives on two-dimensional mediums like paper and canvas, so when they attempt resin art, it just looks like a particularly thick painting. They lack that third dimension, that depth.”

Recently, Thong quit his job at the marketing firm to concentrate on his passion full time. He’s been told his work has potential. “I’ve only just found my footing as a young artist,” he says. “It’s scary and exciting, but I think I can make it.”

In the near future, Thong and Choi Choi Studio hope to organize workshops to meet and connect with like-minded artists and collectors.