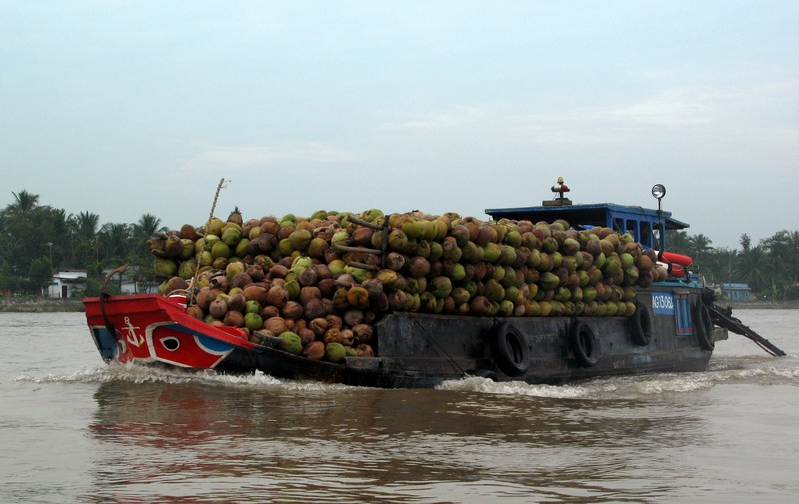 Take Me to the River

The gentle ‘put-put’ of a single- cylinder Chinese diesel engine is the soundtrack to the waterways of Vietnam. While large, modern, metal-hulled freighters and sand barges have taken over much of the heavy lifting required for Vietnam’s rapid modernization and industrial development, the more traditional wooden boats, skiffs, barges and coracles still ply their trade along Vietnam’s thousands of miles of rivers and canals. 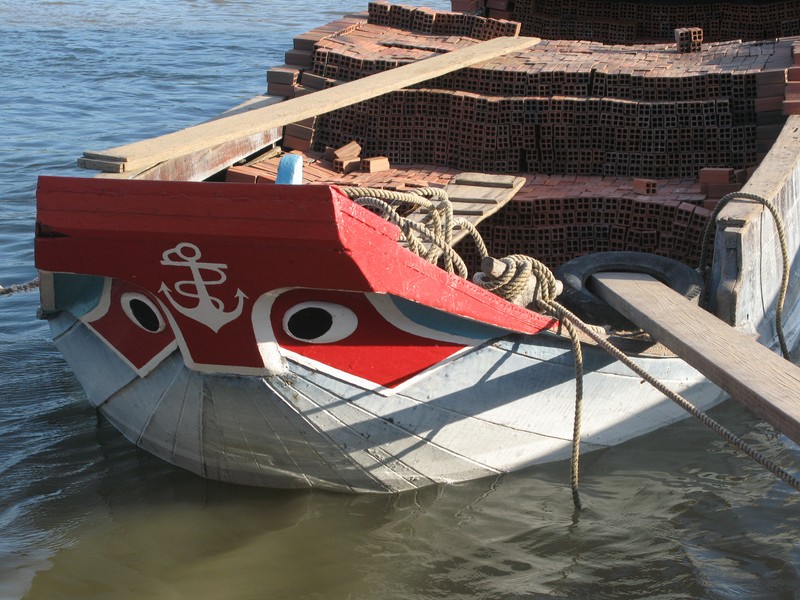 The freighters of the Mekong Delta are particularly iconic; almost all have red-painted bows with a pair of large oval eyes to watch for traffic and help the captain find his way back to safe harbor. While there is a lot of variety to the Mekong Delta freighters: some with large deckhouses to transport dry goods, some with a floodable central live well for fish transportation, others simply with a flush deck for loading more robust cargo, all are built to a similar plan. “All start with an exquisitely curved barrel stave hull. The hull is built right up to the deck edge with no frames whatsoever, formed entirely by the curve of the planks, which are pre-bent at each end. These boats are as well-fitted together as a lute or a whisky barrel, and are endlessly adaptable,” he explains. 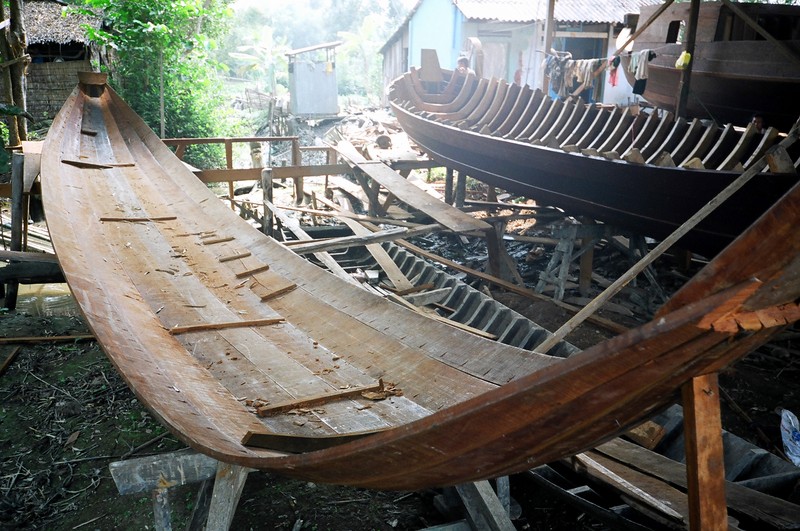 Many of the larger boats also have covered living quarters for longer journeys, extending over the stern. Protruding beyond this is an area for hanging laundry and for slinging hammocks that provides some respite from the sun. Despite the various additions to the superstructure, when cruising light these boats are fine river crafts, nosing along at a good pace. They are, however, more often than not seen loaded right down to the waterline, trusting to their exquisite construction to carry heavy cargo without foundering.

One of the most common cargos, especially at this time of year, is sugarcane, though the crop is providing bittersweet sustenance for farmers. Due to bumper harvests earlier in the year, sugarcane prices have plummeted to around USD40 per ton, sometimes dropping even lower than that, while yields have dropped significantly due to adverse weather conditions. Still, sugarcane is ubiquitous, and the VND5,000 nuoc mia refreshes and revitalizes Saigon’s busy commuters at almost every street corner. The Mekong’s wooden freighters constantly serve this demand, piling their boats high with sugarcane loaded crosswise, to be sold at waterfront markets or taken to refineries on the outskirts of the city. 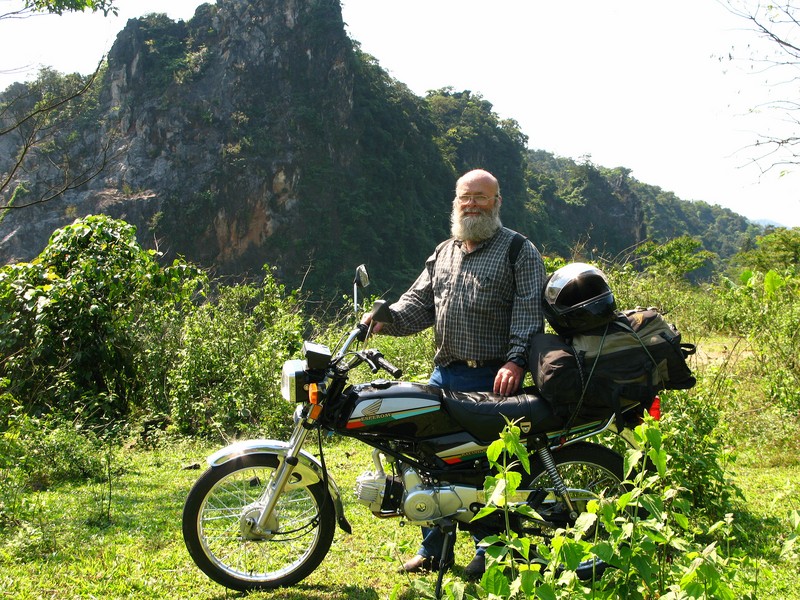 For the captains who work these boats, it is a life that is at once lazy and full of industry. Floating soporifically downstream under the beating heat of the sun is work in itself, and this easy motion is only achieved with a lifetime’s knowledge of the river and its traffic. Working a heavily-laden freighter in narrow waterways, navigating between dozens of other craft, requires constant vigilance and careful management of the engine and tiller bar. It is a privilege to watch a skilled captain at work. The Saigon River is incredibly tidal, and when the tide is coming in, it is difficult for any large boat to make any progress. Many instead choose to anchor, which can be a complicated process in itself amongst so much traffic. 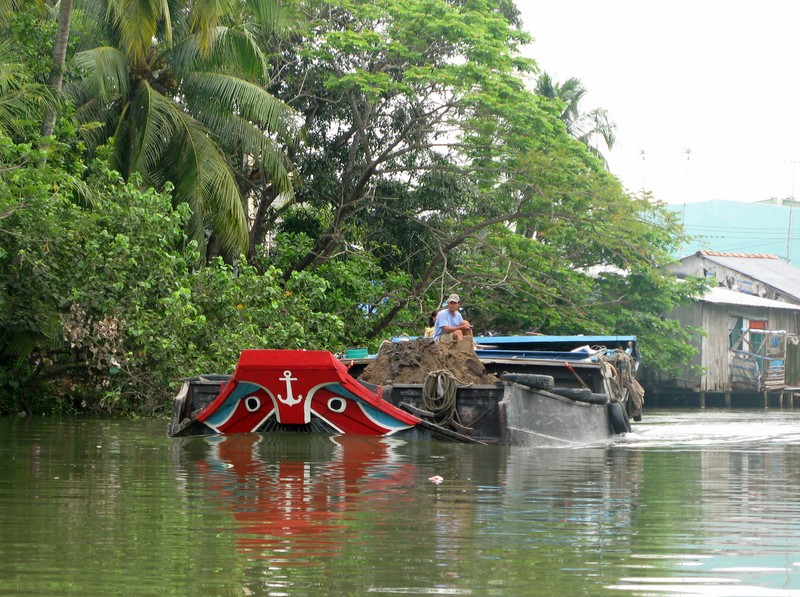 The assorted transport boats of the Mekong bring the produce of Sa Dec to the banks of Saigon, and one of the most vibrant flower markets of the Tet period takes place along Tau Hu Canal in District 8. The captains moor their craft over several kilometers, and hundreds of boats blooming with all manner of flowers line the bank of the canal, nosing onto the street. Saigon explodes with color and fragrance in January, and the blooms spill onto the street in front of the boats. Every Vietnamese family bedecks their home with flowers for Tet, some of the larger kumquat trees can be sold for up to VND5 million – traders make a good profit at this time of year, made all the better for carrying such a pleasant cargo.