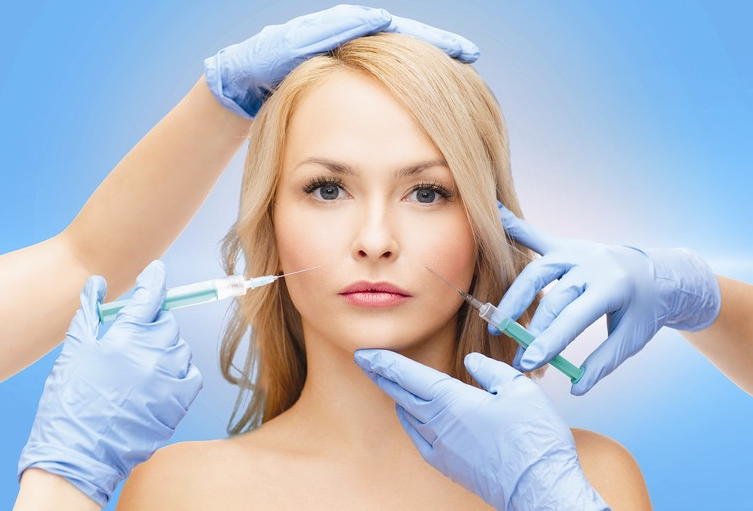 Think most people who go under the knife for cosmetic procedures only ask for bigger breasts and smaller stomachs? Think again.

In the past, liposuction was only used to flatten areas that stuck out. Now, a handful of plastic surgeons are performing Hi Def Liposculpture, an advanced liposuction technique that creates the six-pack many men desire. To achieve this washboard look, the procedure combines liposuction and shrinking of the skin. The procedure is much more involved than traditional liposuction, but the results are obvious.

The corners of our mouths droop as we age. But for an unlucky minority, this permanent scowl can make them look perpetually grumpy. For the procedure, a surgeon removes small skin triangles from above each corner of the mouth to cause it to lift. But there is a downside—this creates permanent scars that can make you look like The Joker.

The dreaded “bread back” is unsightly rolls of back fat which make bras fit uncomfortably. The back rolls are surgically removed, leaving behind a flatter back with a scar that’s hidden in the bra line. The scar is permanent, but results usually are as well.

Is it possible to turn an outie into an innie? Sure is – most outie belly buttons are actually small umbilical hernias. Surgeons make a small incision on the upper surface of the belly button that turns it into a more aesthetically pleasing innie.

A smile is considered ‘gummy’ when it reveals an excessive amount of gums. Many dentists treat this condition by altering the gumline, but plastic surgeons have devised techniques to improve a gummy smile by cutting some of the muscles that elevate the lip and inserting a spacer implant to prevent these muscles from reconnecting.

Dimple creation involves a tiny incision on the inside of the mouth and placement of a small suture between the buccinator muscle and the skin of the cheek. This small, manmade indentation is typically indistinguishable from a real dimple and only appears when smiling.

Some women—and even men—develop excessively long nipples or wide areolas. Doctors reduce the nipples by literally cutting off the tip or removing some skin at the base of the nipple. Excessively wide areolas are reduced by removing a donut- shaped ring of skin from the periphery of the areola and suturing it smaller. This leaves a permanent circular scar around the areola, however. Apparently, lighter- colored nipples are more desirable in places like Japan, where women can bleach them with a cream.

A small wedge of the ear is removed and the remaining ear is stitched together. The result is an ear that is pointed, much like that of an elf. Ear cropping, a surgery more common in dogs, is when you remove chunks of ear cartilage.

Women often opt for what’s known as the Cinderella surgery in order to fit into shoes they desire. The procedure involves snipping off pieces of the patient’s feet until the shoes fit. You can get your toes shortened or lengthened, your bunions removed, and even get fat injected into the bottoms of your feet so you have a permanent Dr. Scholls made of flesh. Knee Lift It’s a simple tuck procedure where sagging skin is removed and the remaining skin is stitched back together tight to create a more ‘youthful’ appearing knee.

A procedure known as “thigh gap therapy” uses cold lasers to give you space between your legs. This cold laser therapy, called Zerona, claims to contour your shape and shrink fat cells. The laser goes in and it basically emulsifies that outside layer of the fat, and allows it to exit out of your lymphatic system.

Artificial iris implants made of silicone can be folded and inserted into the eye to cover up any iris-related abnormalities And never mind the use of contacts, these eye implants can also be used to change the color of your eyes, if you so wish. Hand Lifts Word on the street is the latest trend among brides-to-be is hand lifts. Doctors inject Juvéderm into the hands to smooth out wrinkles and plump the skin with instant results. The procedure takes 10 minutes and lasts roughly nine months.

Want perky breasts but hate wearing a bra? Plastic surgeons have solved this problem with a procedure known as internal bra.. Doctors use hardened silicone cups and place them under the breast tissue that are then lifted with silk straps and screwed into your rib cage.

Through a voice lift, the neck is sliced open and the vocal chords messed with via implants and injections to produce a voice that isn’t wavering or weak.

Palm line alterations have become extremely popular in places such as Japan. Through this cosmetic procedure, people acquire new lines in their palms in order to alter their futures.

In South Korea the most commonly requested surgery is Asian Blepharoplasty, or double eyelid surgery, which creates a crease in the eyelid to achieve a more ‘open’ look.

This trend has been sweeping China since early 2000. Both legs must be broken and then stretched on a rack, then giant steel pins are connected by screws that are punched horizontally through the ankle and calf to a steel cage surrounding each leg. Each day over the period of a few months, the screws must be turned to stretch the limbs. And you’re not finished there either, once that is over you are confined to a wheelchair for six months and must undergo painful physical therapy.

You know that little puffy area under your eye, not the dark eye bag but the slight puffiness of the lower eye-socket that matches the color tone of the skin? Yes, the one we try every day to disguise. Some Koreans don’t have this and, well, they want it. Some Korean women find these little pockets of fat under the eyes cute and believe they give them a more youthful look by brightening the eyes. The look is achieved by inserting a strip of Alloderm or Gortex (type of tissue) under the skin surface through two small incisions.

Turkey’s economy is getting hairier, as a booming medical sector profits from a growth spurt of mustache transplants. Now, hair transplants for the face are growing in popularity, with men from the Middle East, Europe and Asia going to Istanbul seeking a virile addition for the upper lip. The procedure uses a technique called follicle-hair extraction, in which doctors remove clusters of hair from the more hirsute areas of the body and implant them along the lip or cheeks to magnify a mustache or beef-up a beard.

Along with ropey hands and wrinkly earlobes, necklace lines—those horizontal lines across your neck—can be a telltale sign of aging. Many have them smoothed out with a few well-placed injections of Botox or Dysport. And well-placed is the operative term. If the technique or the dosage is not done right, you can weaken the neck muscles or have dry mouth or difficulty swallowing.

Brazilian bums have been a major cause of bum-envy, and this has resulted in a new bum-surgery craze. More and more women all over the world are opting for cosmetic procedures to make their bums big. Bum sculpting can be achieved by a new machine called Lipofirm Plus, which permanently removes fat cells as well as tightening and firming the skin around your bum.

For other articles in this series on beauty, click here.