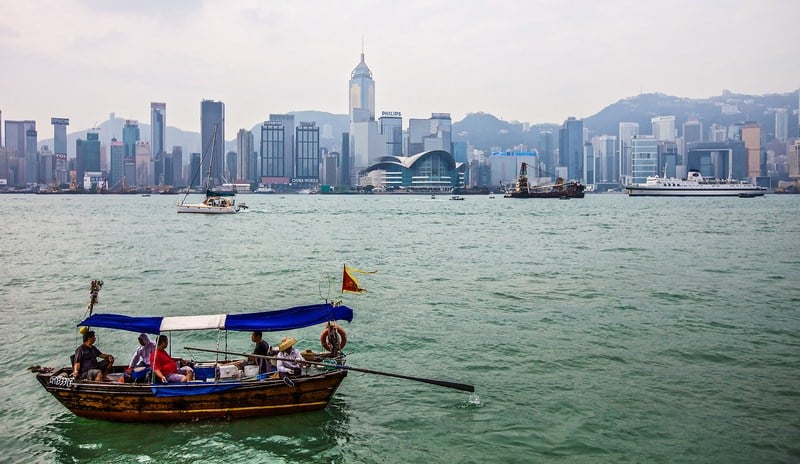 In Hong Kong, that most cosmopolitan of cities, contrasts and energy abound

It’s neither here nor there. Sure, you can find it on the map, tucked under the chin of China, islands dangling like so many stray hairs or crumbs. But though this geographical proximity might give you a sense of place, it doesn’t really give you a sense of belonging. In other words, Hong Kong’s proximity is only an approximation of its identity. 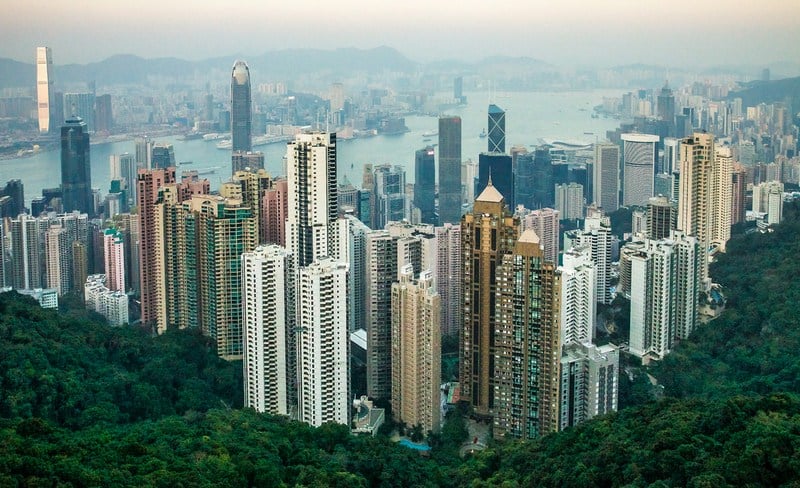 No longer the gleam in England’s eye, too small and too attractive to be allowed to venture out unsupervised, Hong Kong is the daughter fated to never live freely under her own roof. Instead, she is yoked to the most uninspired of terms, the “Special Administrative Region.” Tell me: when you reach The Peak and look out and down on all that spectacular scenery—Kowloon and all the skyscrapers, the lights, the laser shows, the islets and coves that used to hide pirates, islands, hiking trails, helicopter aerial expressways, and elaborate art deco villas—do you take it all in and say:

‘Reminds me of an administrative region I used to frequent’!? Not since the word “Reservation” appeared across the American West has there been such a soulless term spread over such dynamic territory. But time is ticking on such nomenclature; in 2047 the 50-year guarantee of Hong Kong’s territorial autonomy, capitalist economy, and citizen’s rights and freedoms comes up for review in Beijing. Good luck with that, dear daughter. 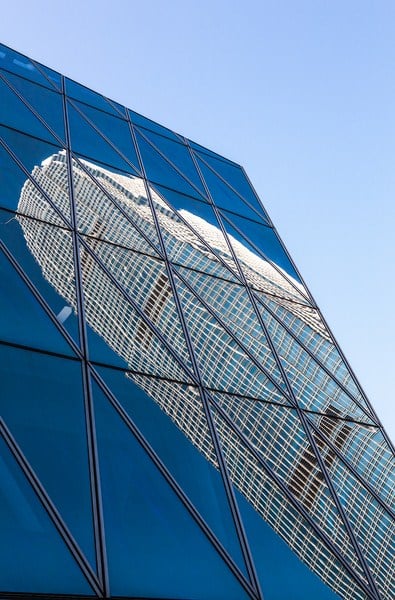 In fact, I can do it in one word: Transit. The noun, the verb, the adjective: they all apply perfectly to this place. And I’ll do it in a phrase: “Sic Transit Gloria Mundi.” 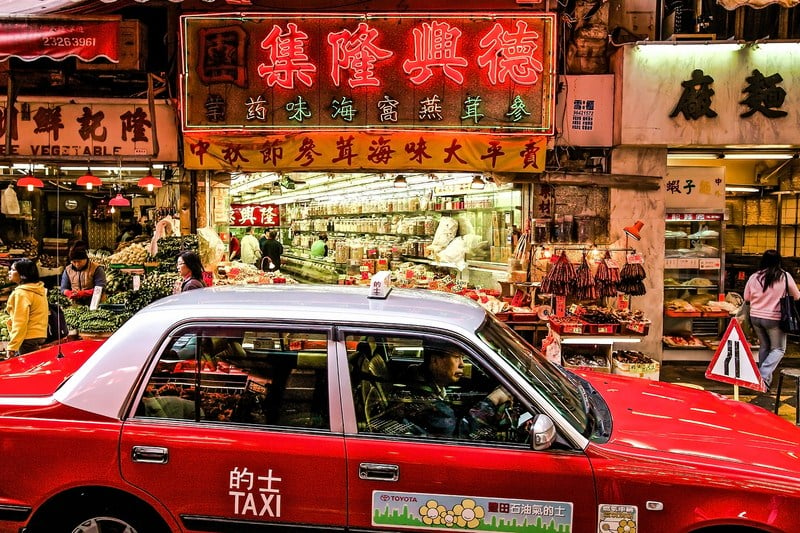 Whether you are pessimistic that the best days of Hong Kong have passed, or just impressed at the sheer global energy of the place, this is the better phrase to utter when you’re up on The Peak, soaking up the scenery: “Thus passes the glory of the world.” Because the glory of the world transits through Hong Kong. By boat, by plane, by international wire transfer, by rail from the mainland, by the turn of a blind eye, by the grace of god – it all floats in and out of a space no more than 1,100 square kilometers (75 percent of which is actually undeveloped land, which should give you an idea of the size of many of Hong Kong’s 234 islands). 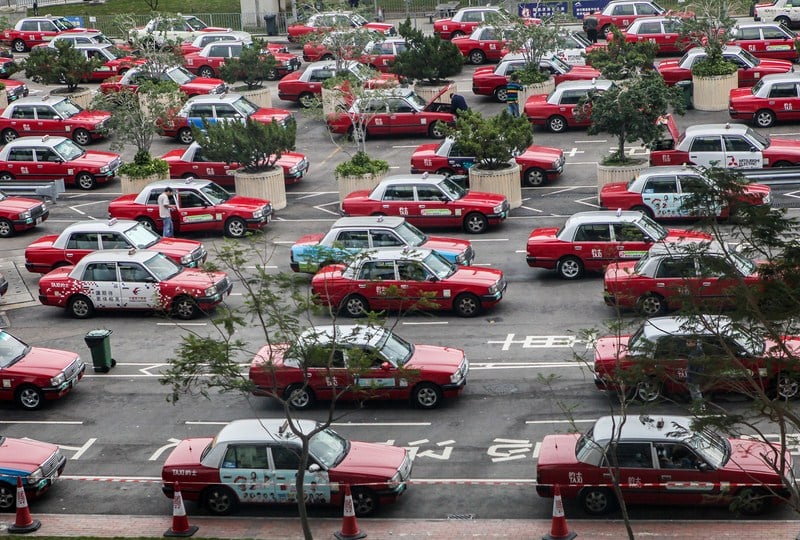 Hong Kong’s harbors take in and spit out around 450,000 container ships each year and handle around 21 million 20- foot long (around six meters) containers worth of commercial trade. Its 12 ferries push 70,000 people back and forth across Victoria Harbour each day; when you add rail, tram, bus and taxi to ferry traffic, Hong Kong transport transits 12.5 million passenger journeys daily – not bad for a population of 7 million. Its airport moves around 63 million passengers annually and 70 flights per hour in peak traffic times (that’s 1.16 planes per minute by my good math). Its stock exchange, ranked tenth in the world on shares traded, moved a daily average of USD113, 423 million over the first four months of 2015. Its endlessly evolving nightlife closes at 2am or much later – meaning there’s always a place to go instead of home. If lunch is for wimps in New York, then sleep is for wimps in Hong Kong; better to go without REM cycles than dim sum and Asian-fusion entrees that are the envy of stomachs throughout the Pacific Rim. The world has yet to invent a perpetual motion machine, but why not consider this ‘Special Administrative Region’ (a more mechanical, procedural title you will not find) a living, breathing (when the air is breathable), example of such perpetuity? For my money, this transit territory itself in transition from one way of life to another is the closest the world has come to creating constant, tireless movement. To me, Hong Kong is the watch that requires no winding. In fact, it seems to increase its energy as it winds through time, rising and rising to reach just short of a helter skelter, frantic chaos. There is method here in the way it all runs – a method that pays respect to previous city fathers and founders and innate talent for making business and making things happen. And I would be happy to drop the Perpetual Motion Machine award off the next time I pass through Central, on my way to that great Bloody Mary at the Blue Bar at One ifc. 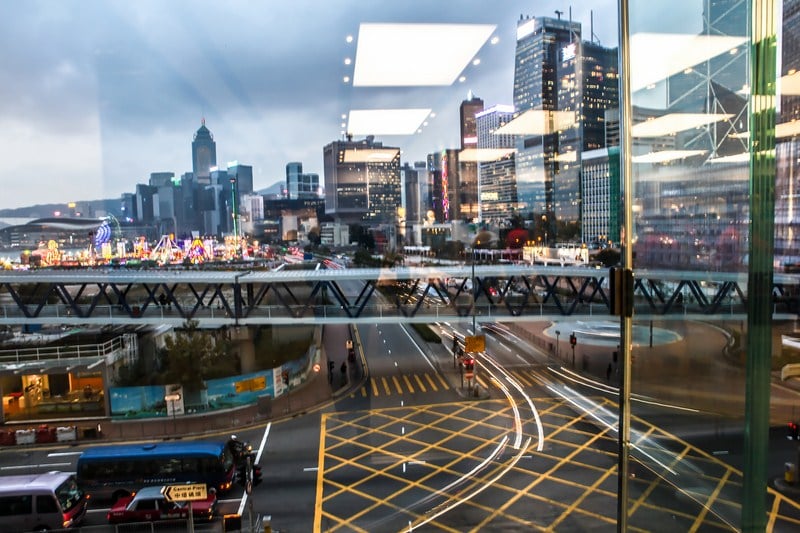 I’m fond of the Blue Bar because it has the right amount of sophistication, pretension, physical and liquid design and presentation. It’s a small place I found while in transit from Vietnam to California, and it put the perfect point on a day of office meetings in the Admiralty area, bird watching in Hong Kong Park, and gallery gazing on Pedder Street. I cannot really sell the Blue Bar to you because I recognize that Hong Kong’s cup runneth over with cool, chic, grubby, glitzy, and casual watering holes, and proximity to whatever you just finished doing is a great decider. But I return to the Blue Bar whenever I have the chance because of the multi-colored glass conversation piece that takes pride of place. It reminds me of the glass blowers in Venice, the post-Soviet, industrial glass factories I visited in Poland, and the views of cities you get from the window seat of your plane when descending at night. It’s something between a bird’s-eye view of flower fields in France and a color-coded reading of some city transportation grid, and it’s worth staring at it rather than your cell phone. It’s also a welcome burst of reds, greens, and blues in a neighborhood where people tend to dress in accordance with their hair color. 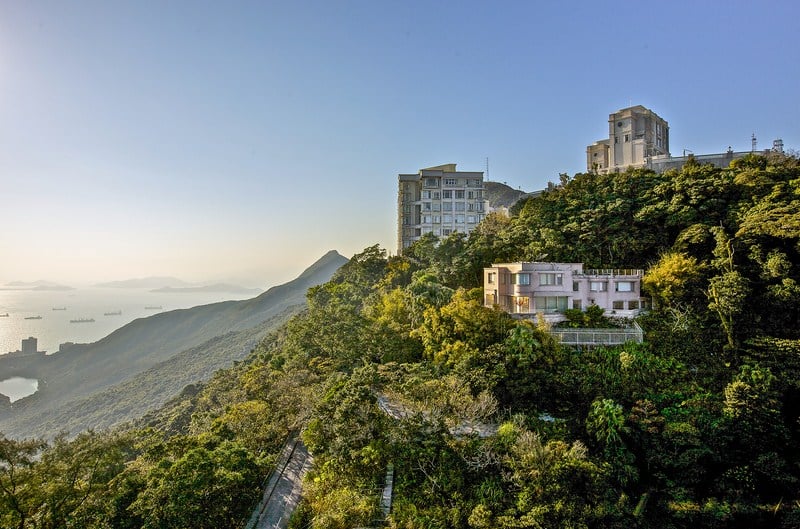 In other words, the people of Hong Kong wear black. All shades of it. Maybe some dark denim to lighten the mood. They are generally pale, and generally smokers. For all the designer sneakers and hiking trails, for all the high-end summer fashion in all the designer stores on Hong Kong and Kowloon and all the beach destinations in a territory with too many islands to choose from, it’s not a place that bowls you over with images of robust good health.

I usually fly out of Hong Kong to Los Angeles, and therefore get to witness two worlds colliding in the arrivals hall at LAX. The Hongkongers rush stylishly out of customs in their black on black slim sartorial uniforms to light up cigarettes before the chilled Southern California air can sneak into their lungs. They are slim and serious and nearly silent while mainlining their nicotine fixes. On the other side of the barrier, their cousins come rushing up to greet them. They are loud, dressed in shapeless, oversized, brightly colored t-shirts and baggy denim jeans shorts bought on sale at any outlet shop on almost any street in America. White statement sneakers. They are usually overweight and laughing unguardedly. When the moment comes for the family members to actually meet, both groups share the exact same thought – so obviously does it hover above their heads: ‘Is this some kind of a joke?’ 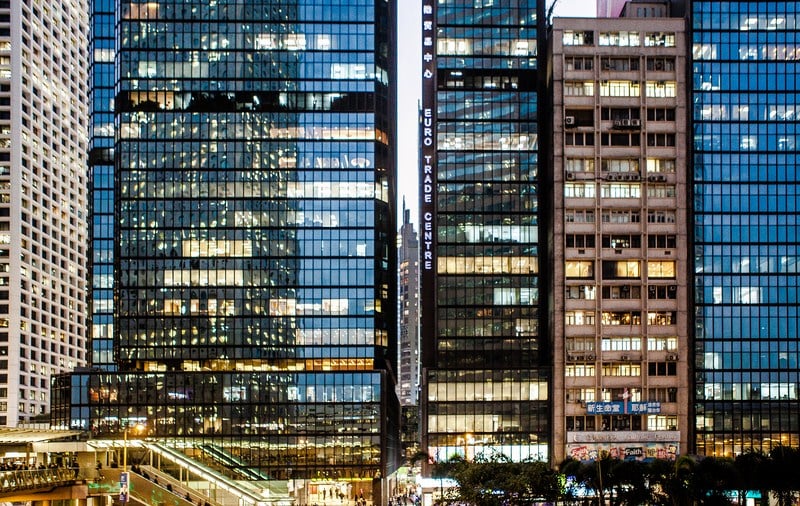 Such scenes are to be savored when it seems that the way of the world is to all end up looking, walking, and talking the same. When all great discrepancies in culture and color and ways to govern are evolving into so many shades of grey and special economic or administrative zones and regions. When you get the feeling it’s all headed to a great sameness that’s slowly readjusting the world into regions that seem neither ‘here nor there,’ it’s worth recalling the iridescent feathers of the tropical birds in Hong Kong’s park, the colored glass grid of the Blue Bar, the painted faces and costumes of the Hong Kong opera performers, all the greens on the hiking trails and the visual splendor of The Peak after dark. Hopefully, these natural and manmade achievements, like the perpetual motion machine, will override a tendency towards so many shades of grey. If not, well… Sic Transit Gloria Mundi.