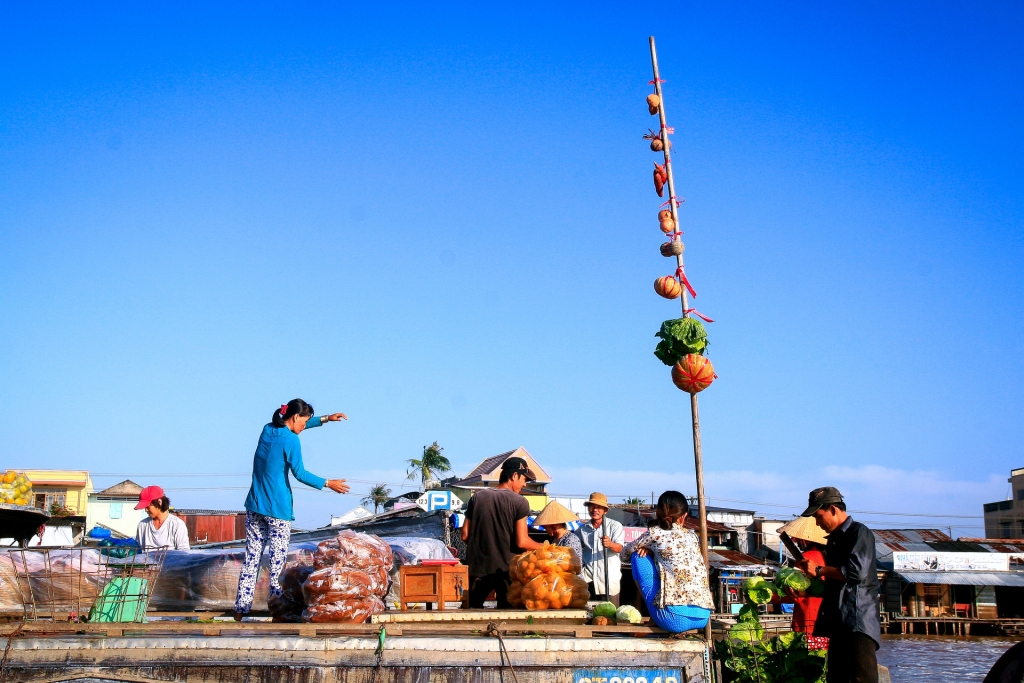 With its meandering waterways and flourishing farms, the Mekong Delta is a place not to be missed

The Mekong Delta is a maze of rivers, arroyos and canals, providing a much calmer alternative to transport than the roads. This complex network spirals off a split in the river in Cambodia and fertilizes the lush landscape on the way to its thriving capital, Can Tho. As the biggest city in the Mekong Delta, Can Tho offers visitors a glimpse of Vietnam’s riparian life, but the delta’s importance runs deeper than scenery; it produces more rice than Korea and Japan combined.

Can Tho (the name comes from ‘cam thi giang’ meaning ‘river of poems’) is a great jumping off point to explore the region. Not only is it an attraction in its own right, celebrated for its fruits, pagodas and floating markets, it’s also the perfect rest stop for those traveling to and from Ho Chi Minh City.

We opted for a seven-hour boat trip, a scary prospect for late-risers, as the fast canoe, or vo lai, sets off around 4am, but a must-do for anyone looking to experience the Mekong. Sitting comfortably on the boat, we watched the sun crack through the clouds on the low-lying landscape as we chugged along a tributary of one of the most famous rivers in the world. Life was already stirring – boats filled up at floating gas stations, traders ploughed their fruit towards the action and woman directed their wooden boats at whoever wanted coffee or noodle soup.

We arrived first at the bustling market of Cai Rang about 6km southwest of Can Tho Pier, marked by hundreds of boats stretching at least half a kilometer downriver. Little boats weaved around the obstacle course created by anchored fishing hulls, each deck packed with coconuts, grapefruits, dragon fruits, vegetables, bananas, and more. Others sold clothes, spices, and even cosmetics.

The fruit was cheaper than anywhere else I’d seen, attracting local traders to buy everything in bulk and resell at markets or to wholesale dealers afterwards.

My love for a bargain overcame a commonsense approach to traveling light and I bought two large durians, something that my fellow bus passengers would resent later on. The energy of trading in this unique environment is a thrill and there are questions of how long it will last as more roads are built everyday.

About 15km away, Phong Dien Market appeared, a huddle of peddlers standing in rowing boats in a much quieter atmosphere than the previous market. Above them were tall poles that held up the goods they were selling. As the market winded up, we left for an island commune, a place of perpetual easy living. Perhaps it was the way of life there, or the promise of passing money, but the locals seemed thrilled to see visitors.

One of the most voracious greeters, a man in green-striped pajamas beaming a huge grin, linked arms with our guide and led us to a patch of ripe pineapples.

Beyond the fruit was a bamboo footbridge known as a cau khi (or monkey bridge) and common in the area although daunting for those without much balance. 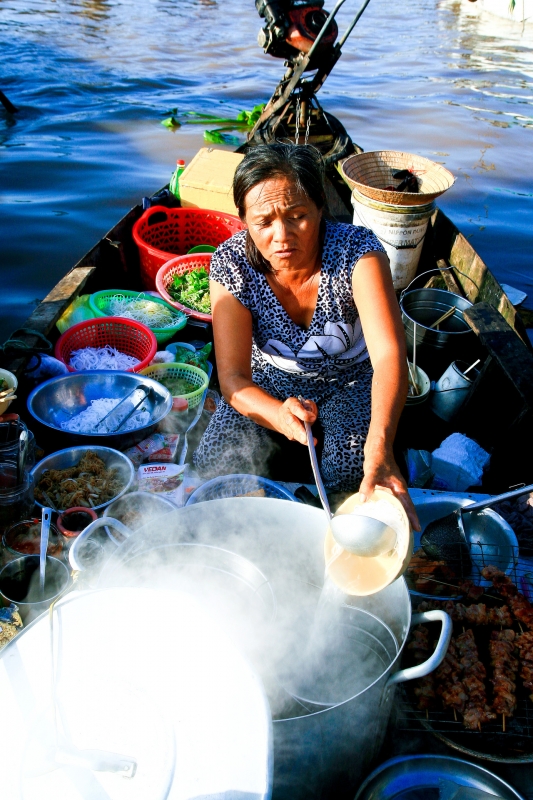 The final stop, Sau Hoai’s rice noodle factory, was situated on the banks of the Rau Ram canal about 8km from Ninh Kieu District. The family-run factory snubs the idea that all noodles are made by machines, instead relying on human ingenuity to produce the chewy and transparent hu tieu bot loc (tapioca rice noodles) for tourists and local restaurants. We watched the noodles being washed and soaked, and rice being husked to make thin sheets with starch.

Like big flat pancakes, rows of the sheets dried outside and then were cut into strips.

Hoai learned the recipe many years ago at Sa Dec Town in Dong Thap Province, home of hu tieu. Dishes of the noodle were available for VND30,000. One of the bowls holding a broth made from dried shrimp and squid, pig bones and lean pork as a topping, provided a much-needed breakfast. There were also samples of hu tieu chien, a noodle-based round cake that’s fried into a crispy yellow. Along with the mangos and other fresh treats, the tour was turning into a culinary adventure.

After leaving for Ho Chi Minh City later that day, I’d promised myself to return and see more of Can Tho. I was fortunate enough to fulfill that thanks to an invitation to a Catholic Vietnamese wedding. A rental priest with an ample capacity for drinking hard spirits conducted the service in a cavernous church in Vinh Thanh District. An engagement ceremony and Buddhist wedding had already taken place in the bride’s home near Hanoi where she wore a traditional red ao dai. Her husband’s family brought five gifts: a pig’s head, sticky rice, tea, cake and wine. 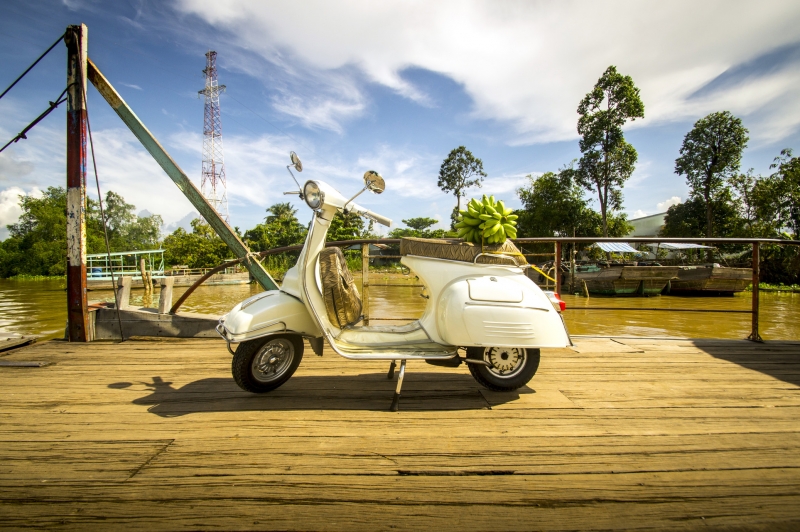 During that ceremony, the families agreed on a date for the southern wedding and now everyone was here; Catholics, Buddhists, both molded by Taoism and Confucianism, slotting with the Mekong’s mesh of beliefs, along with four oddball foreigners at the back. Religious fanatics are sparse in Vietnam, especially in the south, as belief systems hedge their bets. Look at Cao Dai, for instance; Victor Hugo and Julius Caesar stand among its saints, Roman Catholicism shapes its hierarchy and reincarnation its afterlife. The priest—a veteran of the circuit—compensated for an anonymous deity just outside the church by dragging out his service. The man had clearly racked up decades touring the southern provinces.

The reception took place at the groom’s house 3km up a straight road from the church. Once we’d ducked under the gaudy canopy, we passed the couple a cash envelope, as is customary, and enjoyed the overwhelming generosity of the Mekong.

The first of seven courses, chicken in a baked rice ball, was placed in the middle of the table, encouraging everyone to cross chopsticks and start conversation.

Amid the flowing drinks and mingling revelers, two guests distinguished themselves as voracious socialites: the clergyman and a policeman. The priest had become a riotous joker, batting away food and clutching a bottle of Red Label. He gulped the juice and grinned wildly at whoever came near.

A fast-burner, the holy man had to be carried away by two helpers before the dancing began. He would be escorted to a bed and then to another gig. The following day would have more condoling, baptizing or marrying in store, the only certainty was his Red Label afterwards. 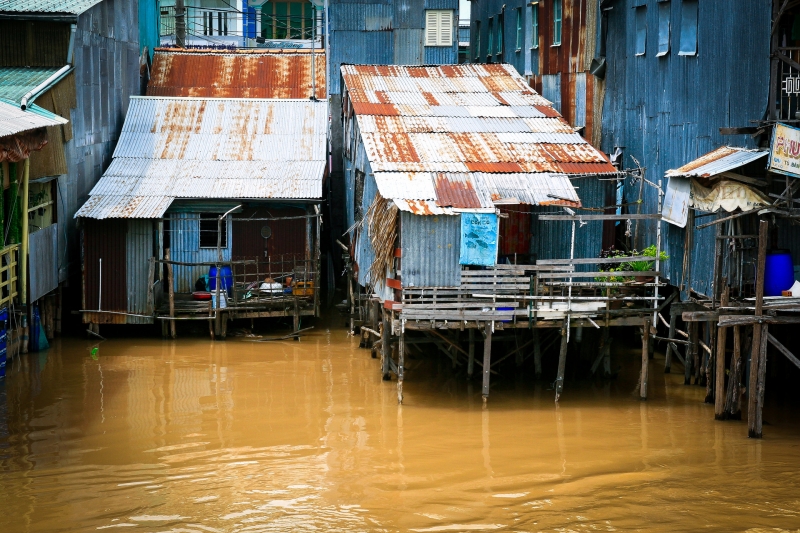 On our way back to the celebration in the morning we waved at an elderly couple sitting at their porch. They beckoned us in with smiles and coffee. The grandmother made sweet rice while her husband rolled tobacco. Families in the Mekong are strong contenders for some of the warmest and most open on earth. The grandfather gave me rolling paper, suspiciously toilet roll-like in appearance, and we arrived back at the wedding. There the policeman downed his beer as if it was his first, and hugged us one by one. They were odorous hugs, stale, boozy and smoky, but he had kept the party alive, perhaps single-handedly at one point. He shared a flow of local dishes and beer with us, looked at his watch and left for work.

As a parting gift, the groom lent us his canoe for two hours. Eager to tour the Mekong by boat again, I happily floated past a paddling of ducks, spotted nets cast behind stilted huts and stopped at banks flanked with stretching rice paddies. In the same way it has done for many others, Vietnam’s rice bowl will always keep me coming back for more.