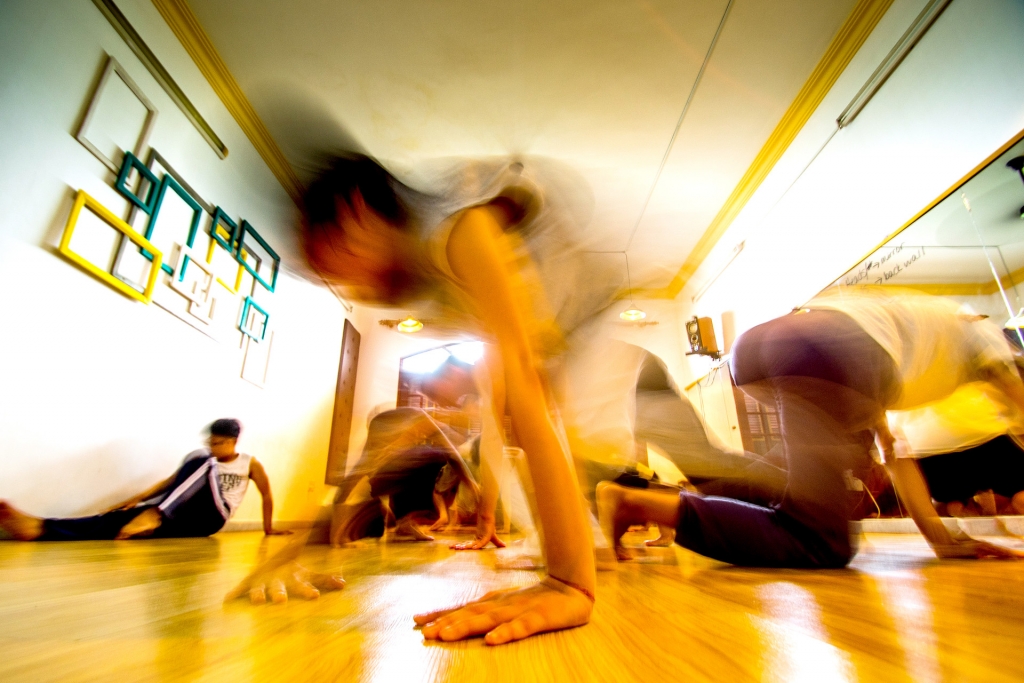 Expressing yourself through dance

If you find opening up to your friends and family a sometimes daunting experience, then opening up to a group of strangers through the medium of dance should be a definite no-go. Except if you’re at The Movement Kitchen (Facebook: The Movement Kitchen), a twice-monthly workshop challenging and inspiring people of all backgrounds in a studio in District 1. Launched by artist Emily Navarra, 35, in March 2015, the workshop initially taught mainstream styles of dance and gradually moved into more adventurous territory; now it’s two hours of free form movement.

“I said screw this, I’m going to just do what I do,” says Emily. “I’m just going to leave it out there and if people start to come then they come and if not I’ll give it six months. Since then people are coming from all over. They’re really curious. I tell them immediately this is not a dance class; you will not be learning any steps. It’s all about expression and then exploring these methods I give them.”

Fortunately, people without any history of professional dancing are welcomed, hence my first workshop—Chance Dance. As one of the handful of workshop themes, it combines the philosophies of two 20th century artists—a composer and a dancer—and an ancient divination text along with Vietnamese cement tiles.

This curious mixture lays the foundation for a choreography game and, ultimately, a performance, but first comes the warm up, a series of exercises that provide gentle introspection and a chance to break the ice with the group. Focusing on my breathing, I followed the others in shaking the whole of my body and then propelling my arms around the room; the ice was well and truly broken. 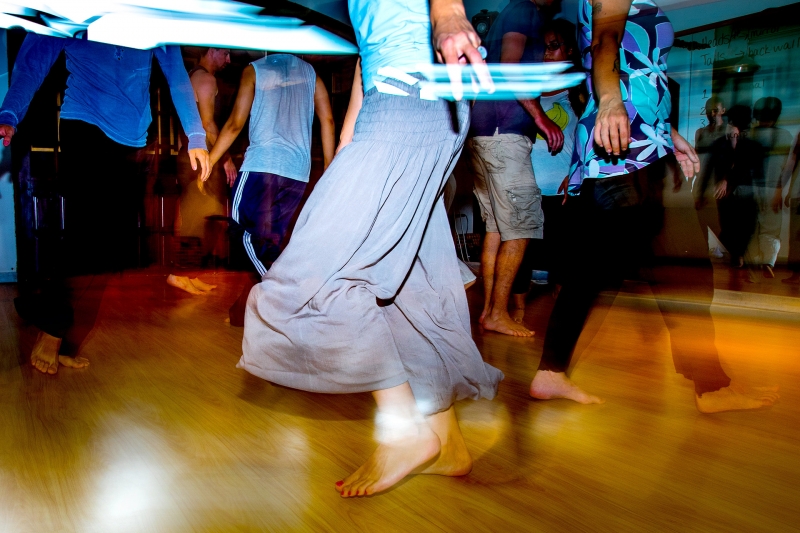 Thirty-five-year-old Ben Watkins, a soft-spoken Englishman sporting a black vest, bumped into me as we leapt around. He had traveled from his job in a furniture factory in Binh Duong Province to make this, his third workshop. “When you are moving with people in day to day life you do not get that intimate,” Ben said afterwards. “You generally keep a little bit of distance, even with friends.” A matching of patterns we selected from a bag split the nine of us into three teams, each one tossing a coin to decide whether we should face the wall or the mirror. Two rolls of a dice decided which way to move and how many times, for example vertical, three times. The process drew inspiration from ancient Chinese book I Ching that people consult by tossing coins for guidance to its answers.

My team, two very capable dancers, and I created an abstract routine of which my only suggestion was to pretend to wash our faces.

Unsure at first, I began to feel at ease working with the guys and could see the session being conducive to creativity in everyday life as well as opening up minds. In the next stage we picked out a Vietnamese tile pattern that had to be incorporated into our moves. Our hands gestured the shape of a diamond mirror that reflected our washed faces, thanks to the diagonal lines of the tile print.

If there were any feelings of judgment in the room, someone would have seen my lumbering rehearsal and asked me to leave before it was too late… for everyone. There was, however, a warm atmosphere full of good energy where people could unleash movements that they kept bottled up on the streets.

“There is not one ego that walks through that door,” says Emily. “I do not say to come without your ego, it’s just natural.”

Emily, a professional dancer and choreographer who comes from a town near Chicago, has made a name for herself in Saigon’s art scene. She founded The Melting Pot, a regular collaboration of musicians, dancers and artists, in Saigon Outcast in 2012. Her next project, Standpoint Theories, involved a reenactment of the myths behind six Vietnamese legends that showed in Saigon and Quest festival near Hanoi.

Before coming to Vietnam, Emily essentially danced her way around the world, touring around the US, Africa and European countries. When she settled in her father’s homeland of Tunisia, dancing at a resort, it seemed like a fulfilling job in a beautiful country. Then a 26-year-old Tunisian street vendor struck a match to his gasoline-doused body in protest against the daily extortion he faced from local authorities. It led to the Arab Spring; protests rippled throughout the country, the government cracked down, and more people were injured or killed every day. After a terrifying encounter with gunmen in a train station, Emily says she left for Saigon on a friend’s recommendation. She supplemented her art by teaching English and is now using her passion for dance to empower others.

The choreographer took up dance at the age of 22, later than most other professionals, after her dreams of achieving in sports were dashed when her knee was dislocated in a softball match. Being older than most, many teachers told Emily to quit, while fellow students gossiped about her lack of experience.

After one teacher took a gamble and put her in a big concert, she overheard two girls questioning why she was chosen. She says it’s this memory that drives her to help people like myself, without technique or experience, feel confident and at ease when expressing themselves in the workshop. 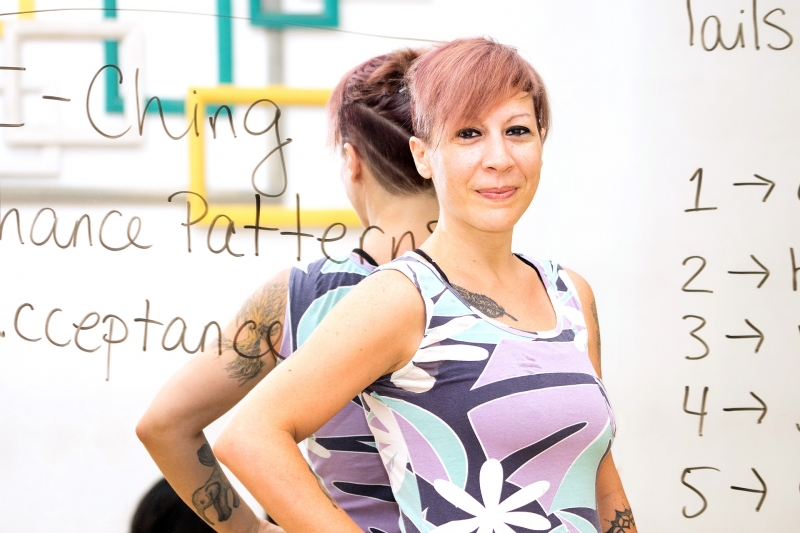 For the final stage we have no idea what music will be played during our performance. This is the ‘acceptance’ segment, of which we can thank choreographer and dancer Merce Cunningham and his lover, the avant-garde composer John Cage, who worked together from the 1940s to the 1990s. When Merce would collaborate with Cage, his dancers learned the intricate series of steps in silence and only at the first performance would dance and music collide for the first time.

In the workshop, gangster rap accompanied the previous group’s performance. It went surprisingly well with the dancers’ efforts although the biggest surprise was yet to come.

My team, made up of three men, shot out their hands, backs against the audience, as the sound of The Supremes filled the studio. I was about as graceful as a dog trapped in a cat flap and forgot the majority of steps, but none of that mattered when compared with the fun of the experience.

Ben, the furniture factory worker, admitted he was nervous in parts of the session, “especially at the end of it when you do a performance and do not know what music you are going to be doing it to.”

Some of these nerves stemmed from what choice of music his group would have after watching us jive to The Supremes, though it was all in vain as his group’s dreamy glides to Sigur Ros looked almost too good.

On the theme of chance and acceptance, Ben adds, “Being in a multilingual country, you have to accept everything anyway. “There are some things you just can’t control. The more time I spend here the more I just think you have to go with the flow.”

The workshops have not only helped people overcome shyness, but also created friendships that exist outside of the studio. Although intimidating to some, and at times surreal, The Movement Kitchen is a tool for development, or at least an activity that will make the odd Sunday a lot more memorable.