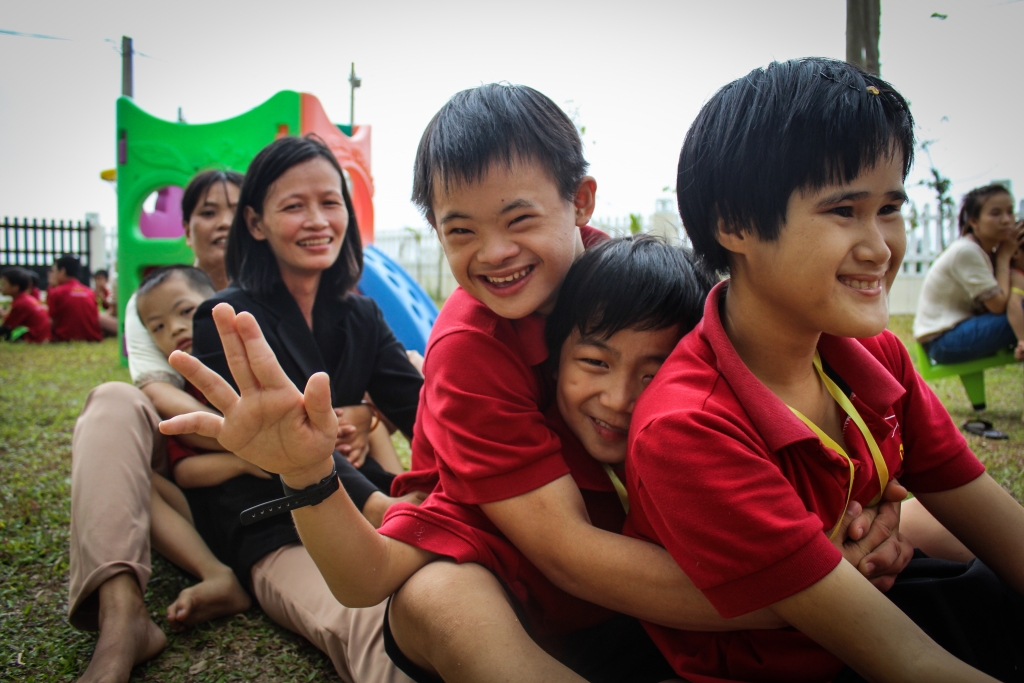 Teachers, charities and parents are fighting to improve education for children with disabilities

Three years ago, a deaf-blind toddler who self-harmed was brought out of a psychiatric hospital and into The Kianh Foundation, a charity for children with disabilities in the central province of Quang Nam. The bright girl’s behavioural issues challenged staff, but eventually her strength and determination were guided towards learning; her independence grew, she was given high-powered hearing aids and is now beginning to express herself through sign and some words.

Behind her success story are the failings of a woefully ill-equipped public school system for children with disabilities. Under qualified staff, scarce equipment and unsuitable classrooms plague the hopes of families who struggle to give their children brighter futures. Stigmas in Vietnamese society contribute to the problems, discouraging parents from sharing their child’s disability with the community. Although the mountain of challenges is steep, a handful of institutions and individuals are overcoming it.

Parents in Ho Chi Minh City displayed an inspiring example by launching a non-profit school for autistic children eight years ago. They acknowledged, however, that it was an act of desperation: Vietnam has no public school dedicated to educating children with disabilities. Some public schools accept children with special needs—16 in Ho Chi Minh City, according to director of the HCMC Integrated Education Support Center, Nguyen Thanh Tam, in 2014—but they are put into general education classes. 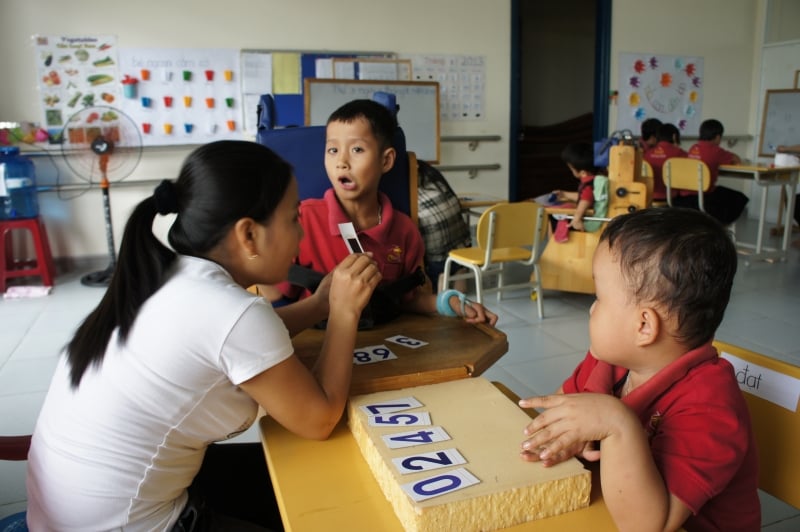 Private specialized schools in the major cities attract families from rural areas, which lack services, although these are often unlicensed, with hefty tuition fees and unqualified teachers. An undercover Thanh Nien News reporter exposed the heinous depths that specialized schools can sink to when he secretly filmed staff at the now-closed Vuong Special Primary School in Saigon. Their crimes included flogging a student with a coat hanger and smashing his head against a door.

Nevertheless, educationalists have seen positive developments over the decades. Vietnam’s current tilt towards the inclusion of students with disabilities in education began in the early 1990s with two pilot projects, one rural and one urban. Awareness campaigns and house-to-house searches for children who were missing from school lists identified 1,078 potential students with a range of impairments. An evaluation of the schemes four years later found that 1,000 of the children had been successfully included in general education classes.

The schemes spread to three other provinces and eventually 4,000 new students were enrolled in neighborhood schools, further integrating the children into their communities. Despite its success, a 2011 World Health Report said that only two percent of preschool and primary schools in Vietnam are inclusive and 95 percent of children with disabilities still do not have access to school. Reliable statistics have been rare since then, but the projects helped change attitudes and policies on disability, ultimately leading to greater efforts on inclusion.

Special education specialist at Saigon Star International School, Stacey Conner, says full inclusion can be “a serious drawback” if executed poorly. ‘There’s a danger that the child will be subjected to inclusion in a classroom where they’re constantly unsuccessful,” says Stacey, who is introducing a pyramid-style system of support to ensure no student slips through the cracks at her school.

During her 10 years in the field, Stacey has taught students with medical disabilities such as cerebral palsy, and intellectual disabilities, for instance, when a child has an IQ of 70 or lower. She alters the curriculum for children with special needs without removing them from main group: a class may read a paragraph while the child who cannot manage the task combs through the text and marks out a particular letter. Improving the class’s understanding of disabilities and encouraging children through positive reinforcement also play vital roles.

“You want to make sure that [an alternative curriculum] doesn’t alienate the child socially or emotionally because they’re completely taking everything in that’s happening [around them]. You don’t want them to feel like they’re being socially and emotionally not at the appropriate grade level.”

Explaining to parents of a student in an international school that a child is showing a disability is a sensitive task because “not everybody wants a diagnosis,” she says, hastening to add that the school is not legally qualified to diagnose—only to recommend outside service providers. 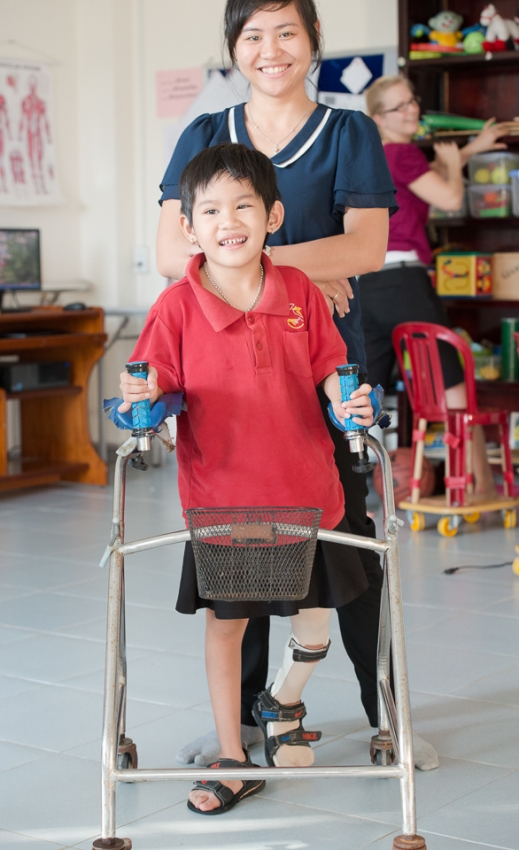 As a consultant outside of her role at the school, she has seen conditions being stigmatized. “I’m hesitant to say people do believe this, but [some] say it’s sort of a punishment in a way, a karmic comeback for someone who has made mistakes or done something they shouldn’t have done, and now it’s coming back on the parent in this form, which is heartbreaking because these are beautiful, wonderful children that you work with and you love. Often [the parents] don’t want to talk about it or reach out for help because if they reach out for help other people will know and it will get out in the communities.”

“If you are living on a local salary, it would be incredibly daunting [to make sure your child receives the appropriate education],” says Stacey. 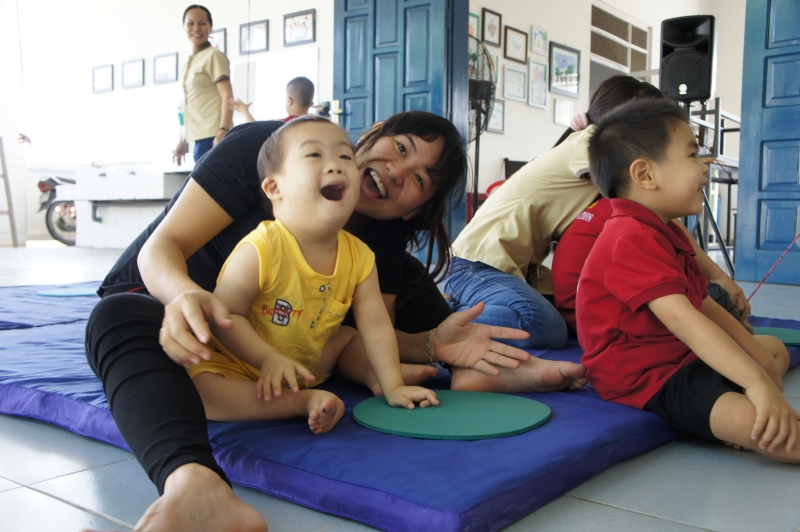 The law flaunted a parade of promises: the right to education for children with disabilities, reduction and potential exemptions on their school fees, and guidelines on teaching and assessing the children, to name a few.

Stacey says there’s a discrepancy between policy and implementation of that policy, an observation echoed by Vietnam National University’s Journal of Education Research (2013). The study interviewed local authorities, sector departments, and people with disabilities along with their families, a third of whom said they could not afford to pay the cost of textbooks and transportation.

The study revealed that even in the specialized schools families and charities had to supply equipment such as Braille and wheelchairs, but it favored specialized schools over the inclusive approach and reported an increase in services for disabled children from 2009 to 2011.

Nick Keegan, director of Business Development at The Kianh Foundation, said via email that facilities for children with disabilities were “virtually nonexistent” when the charity began in 2001. “There has been a noticeable increase in support and training provided by foreign NGOs. However, there is still a huge need for specialized services and support that has yet to be adequately addressed.”

The charity has helped at least 200 to 300 hundred children and their families, and currently supports 100 children. Over the years, the most common disabilities of children in the charity have been cerebral palsy and Down’s Syndrome although there’s been a rise in the number of children with autism. 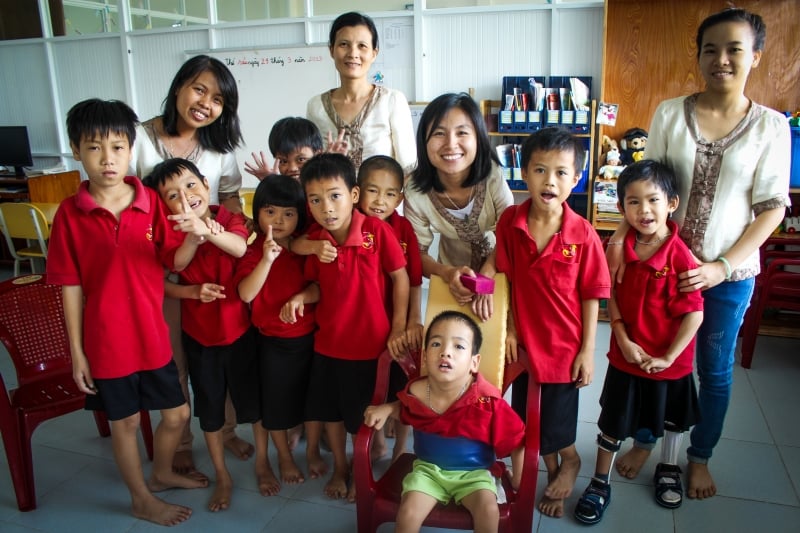 Nick said that they have received children who were initially accepted into the school system but then asked to leave when there have been no clear signs of development. The charity aims to guide some of the children with behavioural issues or mild cognitive disabilities back into the mainstream system. Early intervention, a preference of Stacey’s from Saigon Star, has seen results at the charity.

Young students are taught skills to prepare them for a structured, academic environment, so far sending five pupils back into the school system; the latest being a five-year-old boy with high-functioning autism who had spent two years at the charity.

“We will be monitoring him closely but he is yet another example of how early intervention really works,” said Nick. He added that families of special needs children in rural areas are forced to keep their children at home because of ill-equipped local schools. “In particularly difficult circumstances, families often give up their children to an orphanage or similar institution, as they simply cannot cope. There is a real and desperate need for special needs education and therapy support services, not just in rural areas. It is heart breaking for families to be faced with the decision of having to surrender their children to an orphanage.”

Nick recognizes that city services for children are improving and increasing but still inadequate while the situation is far dire outside the cities. “Like many things in life, significant improvements cannot result without significant investment,” he added. “Not only financial investment but also time, resources, effort and a willingness to improve. There is a lot of good foundation work being done in Vietnam by the authorities and development partners. Funding and a long-term commitment are necessary to build on progress made to date and to bring about a significant scaling-up of the reach and quality of services.

IMAGES PROVIDED BY THE KIANH FOUNDATION