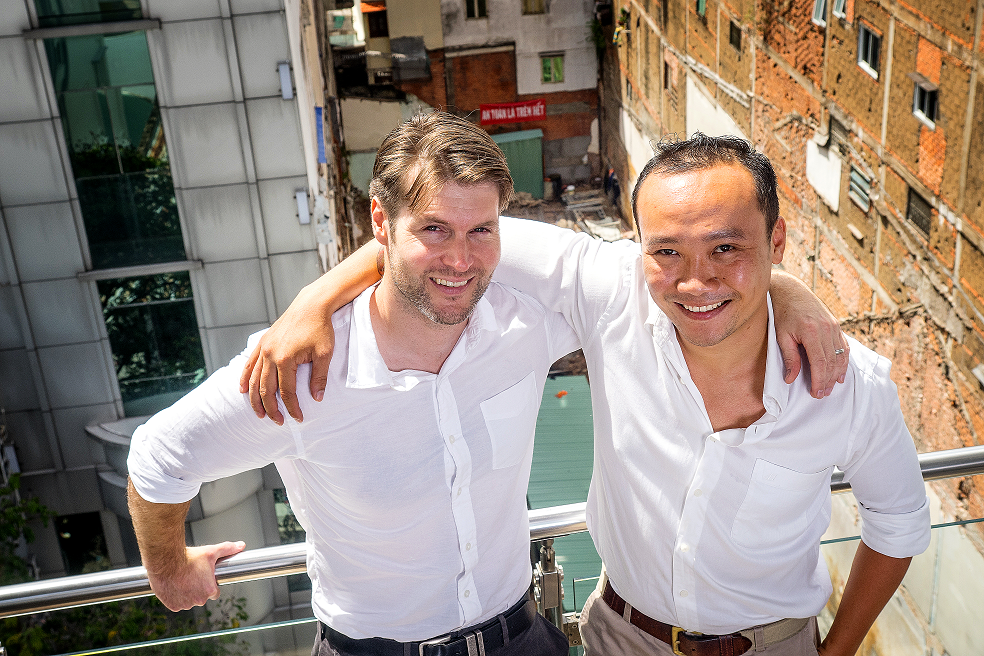 East West Brewing Co. built its impressive brewery from scratch after razing derelict buildings to the ground in District 1’s Ly Tu Trong Street. Once the doors open in December, it will join a blossoming community of independent brewers.

The enterprise is not only making a rotating selection of ales, porters, and stouts, but offering consumers the chance to witness the production process first-hand. East West’s head brewer Sean Thommen, 37, will hold three-hour classes where customers can make their own style of beer in a 100-liter system, producing 300 bottles. The brew will be barreled and, when it’s matured, the rookie brewers can drink their creation at the brewery or at home.

Sean has 15 years of brewing experience in Portland, Oregon, an American city renowned for its microbreweries and craft culture. Speaking of his new role, he looked forward to showing people what goes on “behind the curtain.” In this case, it will be the 100-liter system and a 1,500-liter system, churning out traditional and Asian-influenced tipples.

“That’s when people get that this is really a hands-on thing, see how it’s made, see everything about it,” he says. “People can see it’s right here, made across the bar. The more people learn how to brew, the more passion they get for it, and the more that bleeds off into other people. It has a snowball effect and helps us out a lot.”

And for those who don’t make the trip to East West, its beer will be available in supermarkets across the city as well as bars, restaurants and nightclubs.

The layout of East West includes car parking and cold rooms on the ground floor. An upstairs side entrance leads guests to the 60-person tasting room and 80-person restaurant while in the background the brewery systems sit on an elevated platform. Including the distribution network, the sheer scale of this operation shows an unprecedented confidence in the local craft beer market; all the more impressive considering it barely existed less than three years ago.

Of course, there’s the light, fresh people’s favorite, bia hoi, found on street sides from north to south. In Ho Chi Minh City, a group of Czech-German style brewpubs have served ‘yellow’ and ‘black’ pints for a while, too, but other than these, quality, independent brews were relatively unknown.

Platinum pale ale changed that with its introduction in June 2014; its hoppy, slightly bitter taste warmly received by expats and curious Vietnamese. Since then, a tight group of brewers including Pasteur Street Brewery, BiaCraft, Te Te, Fuzzy Logic, and Phat Rooster, have got the ball well and truly rolling.

“Our idea is to educate Vietnamese people and revolutionize drinking,” says Dau, who became passionate about quality beer during his five years of studying in the Netherlands. “Our place is the biggest brewery right now but we hope others will open. We are in one big team. Craft beer is a healthy drink—people don’t know a thing about that.”

Independent breweries and big beer companies such as InBev (Beck’s, Budweiser) are investing in the Southeast Asian nation’s boozy potential. The population drinks three billion liters annually, according to a report from the Vietnam Beer Alcohol Beverage Association (VBA) earlier this year— more beer than anyone else in Asia besides China and Japan.

Added to this thirst are tempting demographics: the Vietnam Growth Report 2015 indicated that 85 percent of the country’s 90-million strong population is aged under 40. It also has a growing middle class with the disposable income to drive sales of high-end beer.

But forget about Budweiser and the other giants, many expats and Vietnamese agree that suds don’t come more refined than craft beer. Quality and consistency, says Sean, will be at the top of the agenda at East West. “For me personally, the purity of beer is water, hops, malt and yeast. If you can make those ingredients shine in a beer, that’s technically more rewarding to me, doing just that, but I do also love to get creative and work with unusual ingredients. I really appreciate the people who are doing that around here, too.

“It’s important to balance creativity with technically sound brewing. Something that I have learned is there’s a lot of people making creative beer but everybody really wants something that they make over and over again to be consistent and done right,” he adds.

All of the company’s hops will be sourced from New Zealand, Australia, Germany, and the US, providing for its selection of between 10 and 12 beers on the board at a time. These include its flagship drink, East West Pale Ale (6%), zesty with undertones of mild honey and a floral aroma. With scents of pine and melon, the Far East IPA (6.7%) is set to be another favorite, and running alongside are a group of traditional choices. Look out for wheat ale Summer Hefeweizen (5.9%), which uses Germany hops, the Modern Belgian Dark (8.1%), and the Modern Belgian Blond (7.6%). The big hitter, Independence Stout (12%), is perhaps an option best nursed throughout the night. Sean says their Coffee Vanilla Porter (7%) uses coffee beans sourced from a farm in southern Vietnam.

“(The buyer) works with the farmers to help them to sustainably grow coffee,” he says. “We’re trying to find local farms, and work with local people.

Hinting at his future concoctions, he adds, “We will do long running seasonal beers— rye gold, Belgium triple, traditionally based.” And with the 100-liter system, he wants to get creative. “We’ll do all sorts of fruit and herb infusions.”

East West will also boost its repertoire by potential collaboration with Stone Brewing for the first three months of next year. The tenth largest craft brewer in the US, Stone Brewing seeks out artisanal brewers across the world to show the public “there are more and better choices beyond the world of industrial beer,” according to its mission statement. With the help of breweries like East West, Vietnam has just begun exploring this rich and flavorful new world.

(photo taken from above the construction site of the future East West Brewing Co.)