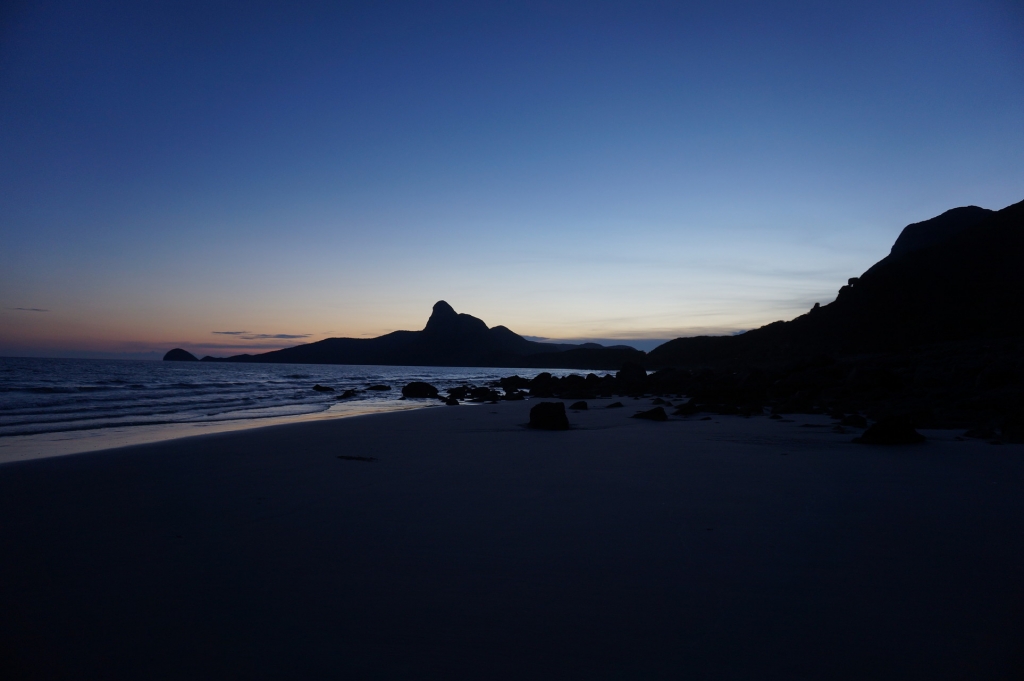 Beautiful nature and dark history in the Vietnamese seas.

After eight hours of chugging  for 100 nautical miles in a ferry off the southern coast of Vietnam, the lush, rugged archipelago of Con Dao took shape.

In the sitting rooms, passengers stirred from their ad-hoc life jacket beds, and a sit-down karaoke marathon came to a reluctant end, the microphone finally being dropped on an empty seat. The journey’s only seasick sufferer, a middle-aged woman, lay crucified. Her husband cradled over her groaning frame, banishing the vomiting by yelling that land was near.

On the upper deck, the captain stood tall as his vessel weaved its way through colorful fishing boats. Below him, 28-year-old Anh, a marketer who I had just met, turned to me. “Many locals told me this island has more ghosts than people,” he said. Haunting spirits seemed incongruous on possibly the most charming and relaxing destination in Vietnam, but Con Dao’s past is as dark as its beauty is enticing. 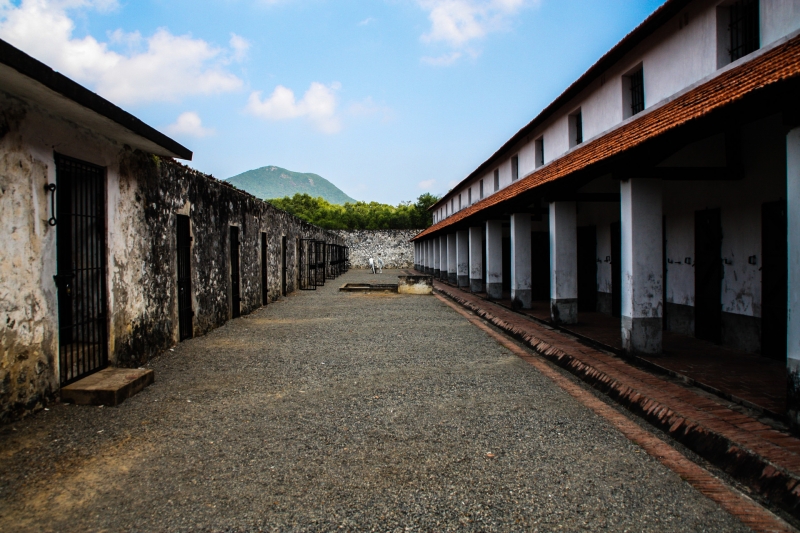 The former penal colony was known as Southeast Asia’s Devil’s Island—only with a lower number of escapees. The French seized the 16 islands in 1861 and built prisons on the fringes of dense jungle; many still stand today. Captured Vietnamese revolutionaries were sent here and inevitability shared their knowledge with incarcerated comrades, building their vision for an independent Vietnam. Seeing that vision through, however, would often mean surviving the infamous cells with ceiling bars dubbed ‘tiger cages.’ Historically salient to Vietnam, these prisons are now part of most tourists’ itinerary when visiting Con Dao.

The destination is also home to a sprawling national park, marine life including the endangered dugong or
‘sea cow,’ empty beaches, and a languid vibe. Lonely Planet placed the islands in its top five Best for Asia in 2016. from Ho Chi Minh City hover around VND1.8 million while food, drink, and accommodation are more expensive on the islands. Yet budget travelers can catch the day time boat from Cat Lo Dock in Vung Tau at 8am for VND390,000 (seat) or, if the weather and schedule are good, an overnight boat at 5pm for VND200,000 (bunk). 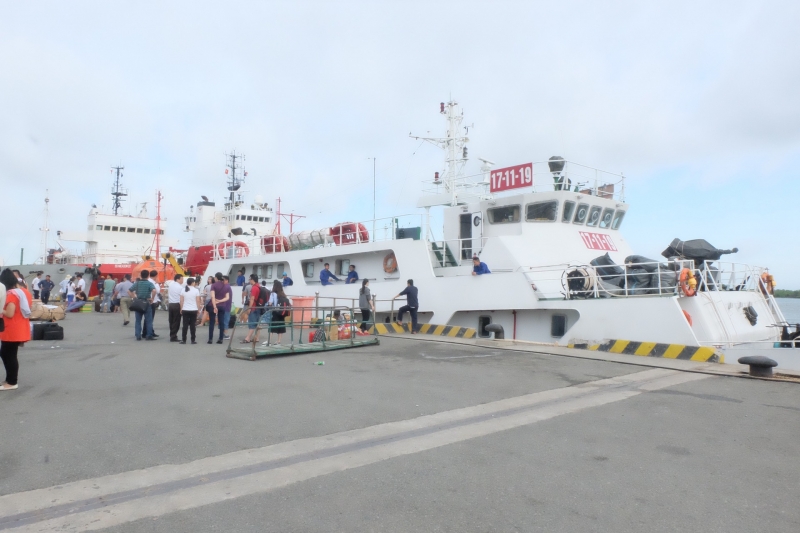 My girlfriend and I planned to catch an overnight boat but we arrived at the dock’s ticket office ((064) 383 8684) too late. Still, the day boat was comfortable and quicker. The sailors, who were proud polyglots when it came to saying “hello,” excitedly welcomed us, the only foreigners on-board. They invited us into the mess where we drank rice wine amid the dried fish skin and cigarette butts. Embarking at Ben Dam Harbour on the biggest island of Con Son, we shared a small truck with five other travelers to the main town for VND40,000 each. A hotel next to Con Son Café on the seafront rented us a motorbike for VND120,000 per day. We rode for 20 minutes on the quiet coastal rode and diverted down a sandy track 1km before the even quieter airport. 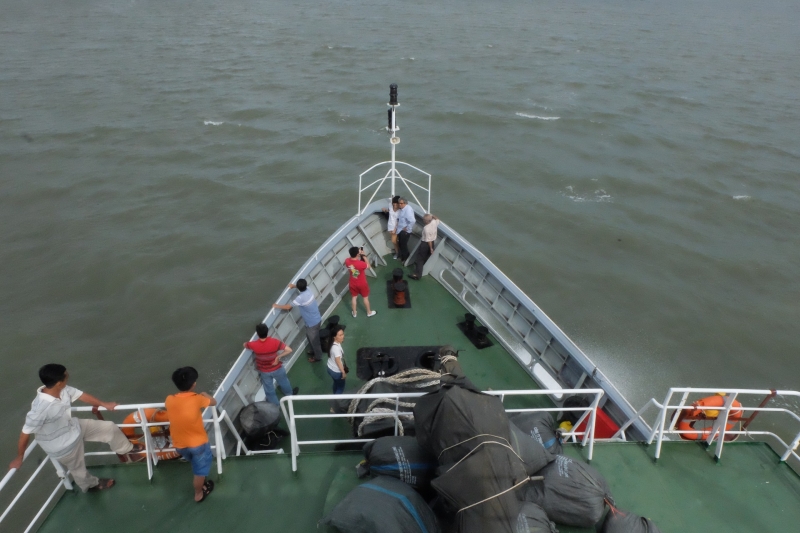 Bai Dram Trau, the curving stretch of sand at the end of the track, was our accommodation for the next three nights. It was late afternoon, the remaining few holidaymakers were traipsing back to their minibuses, and the family who ran the beach’s snack hut were closing up. They offered us a tent for VND300,000 per night or a sleeping bag and wide sun loungers for VND50,000. Enjoying the ocean breeze, we chose the latter.

Having a motorbike was essential on Con Son. Other options—taxi and xe om—are expensive and scarce. The local market served delicious bun thit nuong (VND35,000) and café sua da (VND15,000) for breakfast. Life is horizontal on the islands and it shows in the faces of the 6,000 or so inhabitants, a majority of whom are military. This laidback attitude contrasted with a populace seemingly addicted to Red Bull. Phu Hai Prison, a short ride from the market, was open to visitors. Here we got a heavily diluted sense of the system’s brutality. Two parallel lines of two metre wide pits ran down the middle of the detention buildings, divided by overhead walkways. Decades ago, inmates crammed into the pits, tortured from above by the guards. 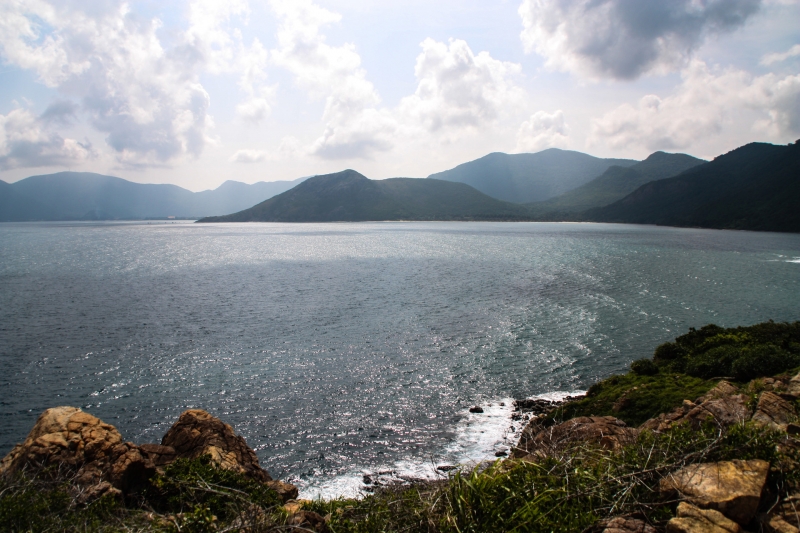 Gaunt mannequins replaced the previous captives in the jail, which is the largest of 11 on Con Son, and was opened a year after the French took the island. I once interviewed a resistance fighter who was taken here. Now in her late 60s, Be Tu described it as “the worst time of my life.” From her four years there, she recalled guards sprinkling her and four others in her cell with quicklime and water, burning their skin and eyes. She was whipped and beaten for refusing to salute the guards. She ate meagre rations of worm-infested rice and was given a small can of water every blazingly hot day. Countless friends died, she said, because of a lack of medicine. 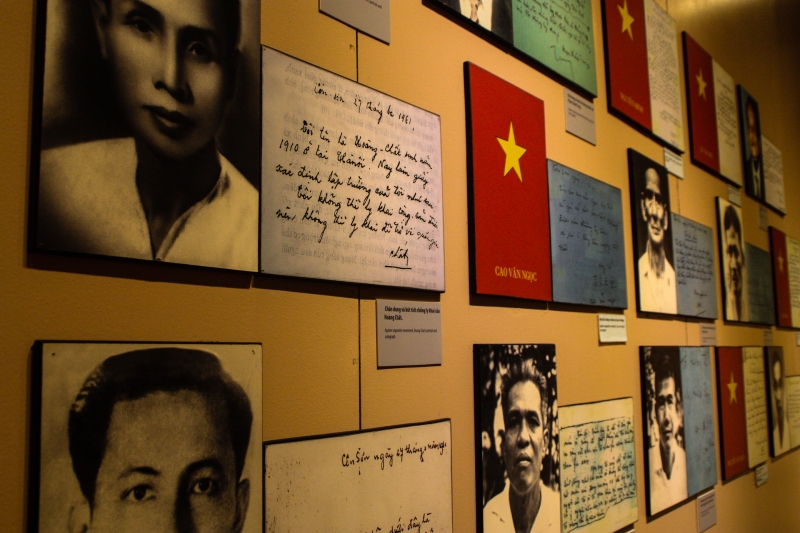 Nature is a perfect antidote to the heinous side of humanity, so we drove to the national park, spotting the odd monkey along the way. A 40-minute hike across a stone path flanked by Bodhi trees took us to Ong Dung Beach, named after a curious myth. In the late 1700s, a wealthy but morally bankrupt man murdered his wife, a highly skilled martial artist, by throwing a coconut at her head. Penniless and guilty after an almighty binge, he fessed up and was exiled to this bay on the western part of the island for 10 years. There were worst places to be stranded, which we found out soon enough.

Our plan to take the overnight boat on the second evening failed due to bad weather between the mainland and us. We consoled ourselves with beer and hai san, a spicy seafood soup, and returned to our deserted beach. It was the same story the next day, no ferry. We messaged our fellow shipmates Anh and his friend Tam who were also stranded. Anh was well traveled, having recently returned from couchsurfing and hitchhiking across Africa. He crowned these islands as one of his favorite places. “It’s my second time here,” he said. “I really love it. I love the nature; here they know how to protect it. Local people are so friendly, and there are not many people around. I can swim naked if I want. We can do anything. We are free.” 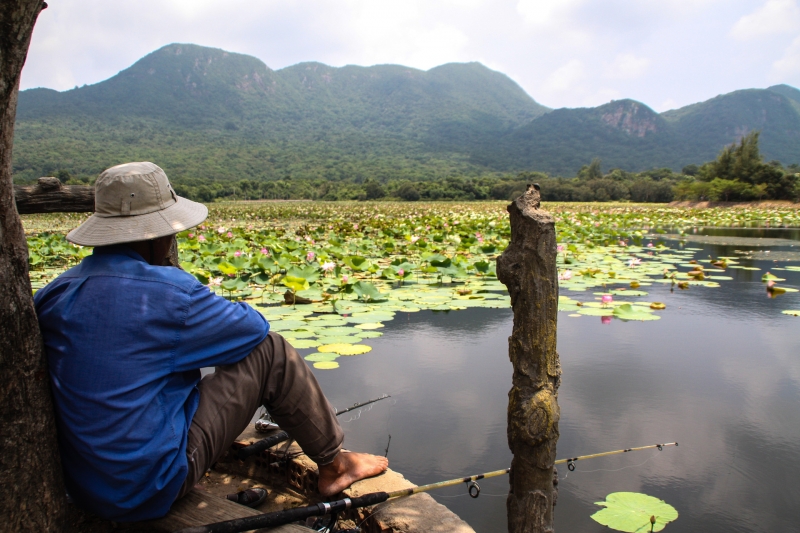 Anh had returned to help soldiers release turtle hatchlings into the sea on a neighboring island. We both agreed this was a sound military pursuit. Then all four of us hiked for seven kilometers in the national park, our trek christened by a large water monitor lizard that ran across the path. Four women and a boy made conversation as we passed Hang Duc Me, a grotto to the Virgin Mary. They said about 400 Christians lived on the islands, and that this shrine was made a century ago. Plaques inscribed with “merci” covered the inside of the cave, the oldest dating back to August 15, 1945—the day Japan surrendered in the Second World War and Ho Chi Minh declared an independent Democrat Republic of Vietnam.

Reaching a desolate coast of dead coral, we skirted across the rocks and found another way back to the road. At this point in the late afternoon, the seafront was stirring with vendors who sold corn, meat sticks, and sweet treats. I stocked up on deep fried pasties for VND5,000 each and  wafers wrapped in the algebra homework of the seller’s daughter. Fishermen ended their day, anchoring at the town’s main pier, Quay 914, named after the number of prisoners who died building it. Shadows passed over the colonial buildings, salt bitten and sun bleached. Roots pervaded the sidewalk and embraced every nook and cranny in the decrepit walls. 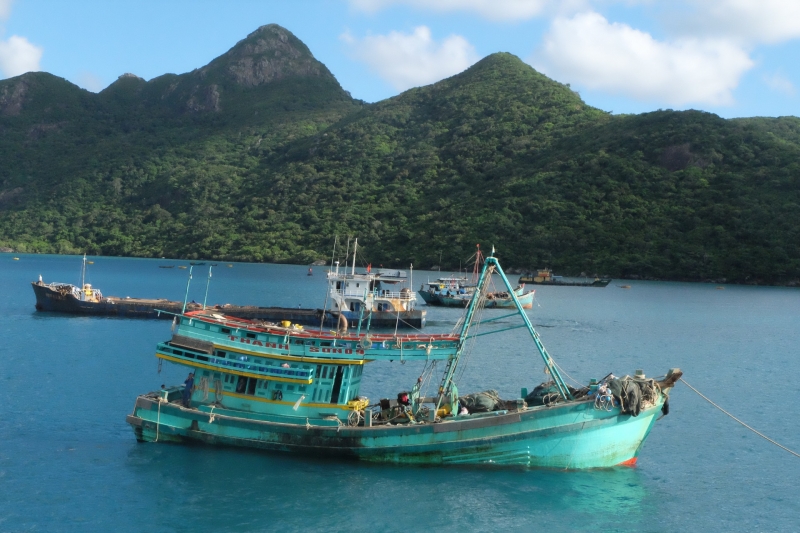 As the gulls gave up their pursuit of a school of fish, I swam out into the sea and looked back at the sleepy town. Suddenly, the last of the sky’s blue was swallowed into a dark amber; a squall was rolling in from the depths, and this amber light, the same color as the sand at twilight, showered over the island until all that could be seen was a black, mountainous ridge. I swam back to the shore, the night beaming with stars and the golden headlamps of trawlers. Although it was tempting to wait another day for the boat, commitments back in Saigon pushed us to get the plane the next morning. Otherwise, delays to the ferry would simply mean more time in this relaxing haven.