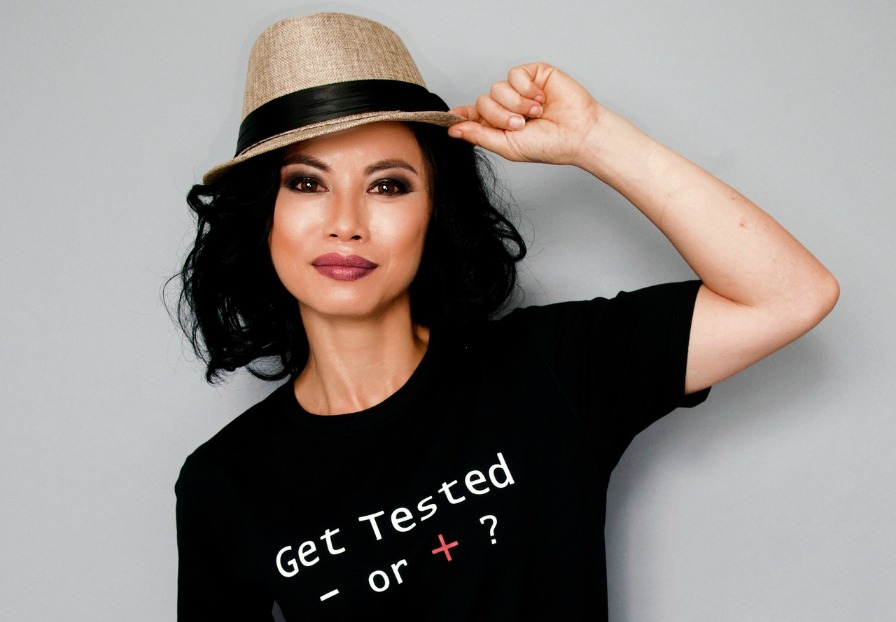 Amazin LeThi is an actress, author, fitness coach, and former bodybuilder, but that’s not all the strings to her bow. She also campaigns against LGBTQ and HIV/ AIDs discrimination, and bullying within the Asian community.

Born in Vietnam, her mother left her at an orphanage in Saigon until she was adopted and raised in Australia. She has since enjoyed a varied career spanning over 20 years, with her advocacy work seeing her become ambassador for Vietnam Relief Services in 2012 and the first Asian female ambassador Athlete Ally, a group focused on ending homophobia in sports, in 2014. Her own group, the Amazin LeThi Foundation, fights to end LGBTQ bullying and HIV stigma in the Asian community.

She talks to Oi about her advocacy work, pulling herself out of a dark struggle, and being inspired by Arnold Schwarzenegger.

How did being a transracial adoptee shape you into the person you are today?

Being a transracial adoptee is a very unique experience unlike any other experience a child would ever go through, particularly being brought up in an all white background, knowing all the time that you look different from everyone else, also being picked on, because you do suffer a terrible amount of bullying as well.

That kind of understanding and experience definitely lead to me being the person I am today in terms of my work, particularly bullying within the Asian community. We’re bullied the most out of all ethnic groups and if obviously you feel different on top of that, that difference and bullying is amplified. I can see things from a very different perspective from maybe how other people can see incidences.

Why is bullying such a big problem within the Asian community?

We’re seen as an easy target. You see what’s happening in the media. For the most part there’s this stereotype that if you bully us we won’t speak up; we’re the smallest kids out of all different ethnic groups, that stereotype that we’re quiet, nerdy, and very passive. But there’s a change now. It also comes down to our culture. I see it within the Vietnamese community, in terms of kids being bullied at school. Generally a lot of this bullying also starts at home. We’re a very conformist community as well. When you have that pressure on you of having to conform, at some point you need an outlet, and it’s unfortunate for a lot of children that outlet happens when you go to school, picking on that kid who they think is the weakest.

On your foundation’s website, it mentions you contemplated suicide. What brought you there and how did you get through it?

When I was a young adult I became homeless for a period of time and I ended up in a very bad crowd who were doing drugs. I had no money, I was heavily in debt and my world felt like it had spiraled out of control. When you get to that point where your world feels like it’s suddenly clouded in darkness, you have these thoughts of what’s the point? Why do I exist? And I did contemplate suicide for a period of time.

I know the issues that youth go through because I’ve been through it myself. The difference with me compared to a lot of youth that actually go through that process and commit suicide is that I had the strength to pull myself out of it, but it’s not easy for everyone, and the majority of youth who go through that need the support because not everyone can pull themselves out of a situation like that.

How did sports help you get out of that frame of mind?

Sports give you the focus and the direction. It gives you a purpose, particularly if you’re playing sports as part of a team or just within a sports community, you feel like you have a sense of community.

Tell me about your sport career. When did you take up bodybuilding?

I started weight training at a very young age, very unusual, at about six. I was bullied a lot as a child because I was Asian. Sports gave me solace and a sense of community. Because I was a good athlete, it wasn’t based on my race; it was based on my ability. I saw myself getting stronger. I started taking up self-defense, martial arts. I liked it so much I started competing as a teenager and felt I could have a career in the health and fitness industry. That’s why I went on to writing health and fitness books and being a qualified health and fitness coach. After that I realized I could use sports as a larger platform in my career and also to help youth.

Your foundation fights against the social stigma attached to HIV/AIDS. What kind of impact does that stigma have on Vietnamese society?

HIV stigma and discrimination is so wide spread within the Asian community. Even in the West it’s still seen very much a taboo topic to even be able to disclose your status. It really comes down to people being educated on HIV/ AIDS and obviously how you contract it. One of the hardest things, particularly within the family unit, is how children are stigmatized and discriminated.

The difficult situation is opportunities within the community. Many children suffer discrimination at school. If people find out they’re living or affected by HIV, in many incidents children have to drop out of school. If no one knows their status it’s that cycle of lying and hiding because you have to take your medication at certain times, which becomes problematic if that child is staying over at a friend’s place. At the workplace as well, if people know your status it may be very hard to get a job. 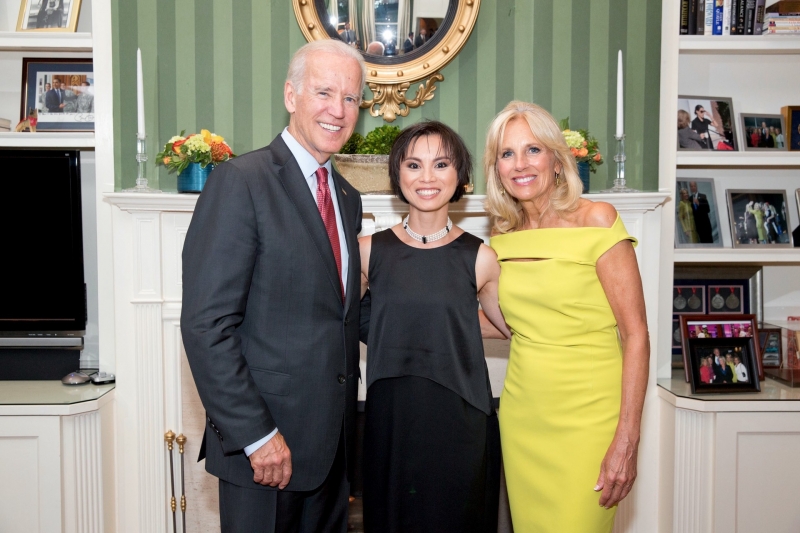 How are you combating the stigmatization of HIV/AIDS?

I do a lot of advocacy work in the community and to other advocates and also the HIV community about HIV/ AIDS within the Asian community. When people think about HIV/AIDS, they think about Africa and, yes, Africa still has the highest incidences but, outside of sub-Saharan Africa, it’s Asia, and people still have little knowledge of what’s going on the ground. Within Vietnam one of our local partners is Pham Thi Hue who’s probably Vietnam’s most famous HIV advocate.

She disclosed her status some years ago and she’s been doing amazing work in Hai Phong and around the country about HIV awareness and also looking after the children who have been displaced by HIV because maybe their parents have died of AIDs. We’re launching a program with her, which is the first of its kind in the country that brings together two very marginalized groups—LGBT youth and kids living and or affected by HIV—in a leadership mentoring educational sports program in Hai Phong.

Why can Vietnamese society be reluctant to talk about HIV?

Within the Asian community as a whole we don’t tend to talk about social or health issues. This also comes from this stereotype that we’re this invisible model minority race, nothing exactly happens to us, so if we sweep it under the carpet it doesn’t necessarily exist.

Also that fear of stigma and discrimination stops people coming forward to disclose their status or to learn about their status. It’s important not just to have education about HIV awareness but also to have sex education and feel comfortable talking about these issues.

What’s the biggest challenge you have faced in your career?

People could never see me doing what I had envisioned in my own mind, so it’s kind of being able to really believe in yourself when you feel like everyone thinks it’s not going to work out and where do you pull that strength from; that the vision you have is the right one. I never had any mentors either so the career I built today is the career I had envisioned in my mind against all odds. That can be a very great challenge if you don’t have anyone who necessarily believes in what you do.

The one story I latched onto was Arnold Schwarzenegger’s because I thought to myself here’s someone who is completely different, he has a funny accent, he went to the US, against all odds he used bodybuilding as a platform for everything else. I thought if he could do that so can I. One of the most important things that I know now is if you want to create success, you need to find people who have done it before and look at their steps.

What’s your involvement in the White House initiative on Asian Americans and Pacific Islanders (AAPI)’s anti-bullying ‘Act to Change’ campaign?

I’ve been advising them on different Asian issues. Part of our collaboration is that I would be part of the President Obama AAPI Legacy Event in December and I’ll most likely be doing an in conversation along with some other high-profile Asian Americans and people from the administration. We’ll be talking about different issues in bullying within the Asian community locally in the US and internationally.

We’re looking at taking Act2Change into the school system as a program and at ways that we can confront and address bullying within the Asian community and also the sub groups under that. Asian youth are bullied the most but then if you’re bullied on top of that, if you’re Asian and LGBT or Asian and have a disability, then that becomes a double layer of bullying. I’m working with the New York education system as well. They’ve actually asked me to come on board as one of their advisors within the Asian community.