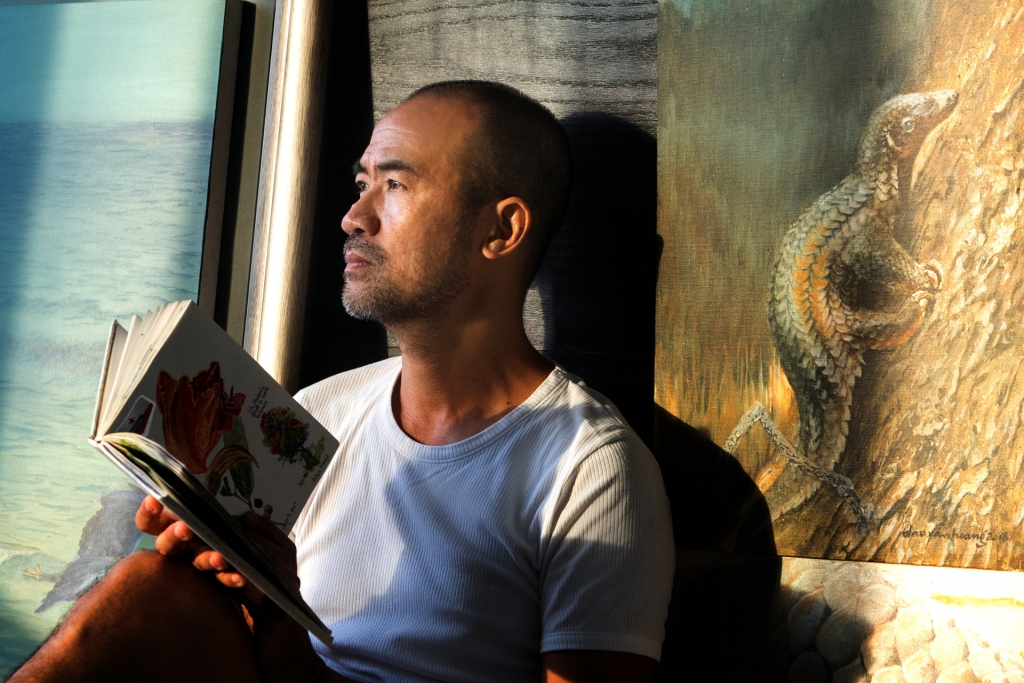 Draw Of The Wild

Wildlife artist Dao Van Hoang is sitting next to his easel in his 10th floor apartment overlooking the Saigon River. Despite his impressive oeuvre, the 52-year-old conservationist is quick to downplay his artistic credence.

“I don’t consider myself as an artist,” he says. “I don’t have an art background or see things the way an artist sees them, I guess. I don’t know a lot of artists. I don’t exchange ideas with them. I don’t go to an artists’ club. I feel uncomfortable.”

His easel holds an unfinished painting of a rhinoceros, its skin emanating the texture of cracked earth, thick and scorched by the sun. He’s mulling over the idea of introducing a little bird to enhance the scene’s composition.

Soft afternoon light pours over his bookshelves stacked with titles such as Primates of Vietnam and Fishes of the Mekong and colors the curious souvenirs of a well-seasoned traveler; a wooden gecko, a hand-painted boomerang, antique cameras salvaged from Parisian boutiques.

But most intriguing are the canvasses, which capture the hidden idiosyncrasies of animals in a way more memorable and permanent than photography. One portrays the gentle curiosity of a tiger, another the fluidity of pacific reef herons flying over the sea of Muine.

“To promote myself I have to call myself a wildlife artist but deep inside I don’t think that’s the end purpose of what I do,” he says. “I love animals and paint them to know them better.”

Hoang uses acrylic painting to create detailed and realistic renderings of animals in their natural habitats. His work can be seen in murals in national parks and public spaces as well as on canvas. He travels the world, sketchpad in hand, drawing the animals he encounters.

Before embracing this lifestyle in 2013, Hoang was creative director for several advertising agencies. At one point he was even a French army solider. And although his focus is now on the tropical nature of Southeast Asia, it was the tamer countryside of Western Europe that accompanied his youth. He arrived there as a refugee in 1980 after a desperate voyage off the coast of South Vietnam at the age of 15.

Growing up in Saigon, Hoang marveled at the creatures in the zoo and made picture books of them from magazine clippings. At the climax of Vietnam’s war with Pol Pot’s Cambodia in 1979, his mother made the painful decision to send her only son away from his homeland with one of his five older sisters. The family had saved up enough money for the two of them, deciding that anything was better than conscription in a war-torn and economically impoverished country.

The plan was to slip out of Saigon in a sampan, a flat-bottomed boat designed for rivers, and reach Thailand within three days. A tremendous storm swept away most of the food supplies on the first night but fortunately the 23 passengers and crew survived. Without any knowledge of sea navigation and only a small engine to support them, they looked on helplessly as their sampan began to drift.

“Somehow we survived for six, seven days…until day 10. Then we saw from a distance a small stretch of sand. We were so happy.”

They had reached a small Indonesian island and were taken to a refugee camp the next day. After hearing Hoang speak a few French words, Red Cross volunteers sent them to France where Hoang attended a boarding school. After a decade, Hoang was granted a permit to see his mother in Vietnam though it came with a mandatory year in the French Army, a clause specifically for refugees who wished to gain citizenship and return to France.

“I hated the army. It was the longest year of my life,” reflects Hoang, who returned regularly to Vietnam until settling permanently in 1996. He became an art director for an advertising agency and then rose to become its creative director for more than 15 years.

“My first few years in advertising were very passionate but after 10 years you know enough and the bad side of it.” Leaping from director in a lucrative industry to full-time painter has unsurprisingly dented his cash flow.

“I still don’t make a living with it,” he laughs. “I didn’t think I could make a living but I saw other wildlife artists who could make a living. I had to try my luck to follow my passion. I said to my wife I want to give it a try for five years and after maybe 10 exhibitions I’ll decide if I have failed or succeeded.

Rhinos, Snakes And Tigers, Oh My

Nearly into his third year as a wildlife artist, Hoang has held exhibitions in the US, Thailand, Italy, Singapore, Cambodia and Vietnam. Things seem to be going well.

He sprawls three of seven travel diaries across his desk. Meticulously neat and beautifully illustrated, they are like the personal records of an adventurous Victorian naturalist. The pages are filled with flora and fauna from along the equator.

“I love Africa and also Central and South America,” he explains. “Everywhere you’re around the equator and have the jungle. With the jungle there are more things to see.”

The majority of Hoang’s paintings are inspired from his “first emotions” of seeing his subject. Painting a lemur, for example, would mean first pinpointing its home, Madagascar, on the map, and then traveling there to see it. So far he has been to almost 30 countries across five continents.

Of course, observing each animal like this is an expensive pursuit, and impractical for each work. He looks for inspiration in books and videos for some paintings, especially when choosing a theme to exhibit, such as the 25 Most Endangered Primates collection he made for a conference in the US. “Some of them I’ve never seen either in the wild or in rescue centers. I have to paint from created emotions through reading them and watching videos of them.”

His usual three-step process for painting begins with field trips; sketching, photographing and studying the animals. Then comes the ideation; more studying its anatomy, ecology and behavior, even checking with a specialist before sketching the composition. Around 70 percent of the painting is achieved on the first day of brushwork, he says, and the rest is usually completed within two weeks. An average (50cm x 70cm) acrylic on canvas is priced between USD700 and USD1,200. 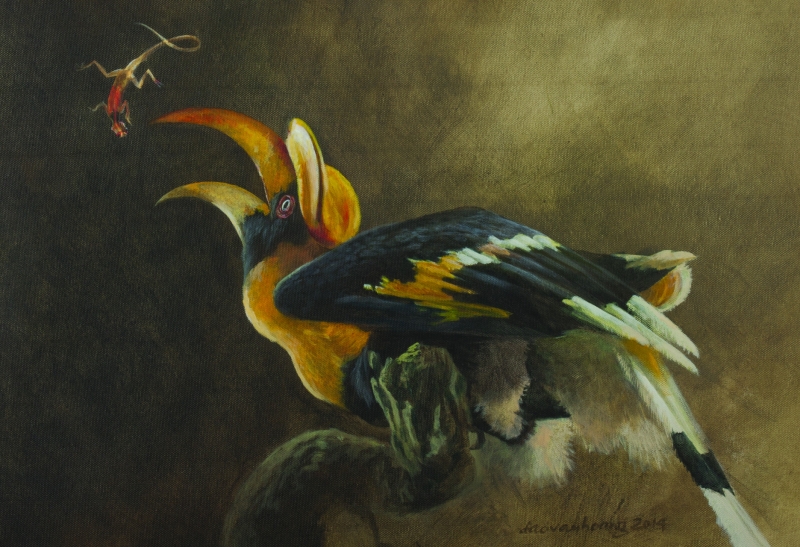 Studying wild animals comes with its risks. American herpetologists who are friends with Hoang invited him on an annual research trip in the jungles of Vietnam. They trekked in the snake’s habitat from 8pm to 2am every night searching for reptiles. “I tried to pull the tail of a snake without knowing what it was. We need to know the snake before you handle them but that time I was maybe a little bit too passionate and too stupid.”

The snake turned back and bit Hoang. It was a kukri, fangs sharp enough to puncture birds’ eggs, but non-venomous. “He bit me here,” says Hoang, pointing to his hand. “Gnawing on my finger, the blood running. The next day I felt it was pretty stupid. Luckily I’m still here today.”

Around 2009, during the time Hoang freelanced for Vietnamese charity Wildlife at Risk, the cable channel Animal Planet filmed him and his colleagues releasing Siamese crocodiles and pythons into Cat Tien National Park. The Javan rhinoceros once roamed that area until the last one was shot and killed by poachers in 2010.

“I try not to think negatively but most of the time you can’t help but being depressed. [The Javan rhinos’] fate was doomed anyway. There was a very small population to be viable. Rhino is too late, tiger is too late. Pangolin, there’s still hope. There’s a strong wave of awareness about them now.”

Hoang cites traditional medicine and the curiosity of eating new meat as the biggest threats to some animals but he has also had some positive experiences. In 2014 he joined wildlife charity Fauna and Floral International on a trip to Cao Bang where they discovered endangered eastern black crested gibbons living near a village. To save the gibbons, the government rehomed the people—a “case for hope,” says Hoang.

He plans to paint hornbills, primates and owls for conferences in Borneo, the US and Italy next year. He also will continue to paint the “small, inconspicuous animals of Asia.”

“I would like to bring them out to the public and say they’re just as beautiful as the wolf of North American or the lynx of Europe,” he adds.