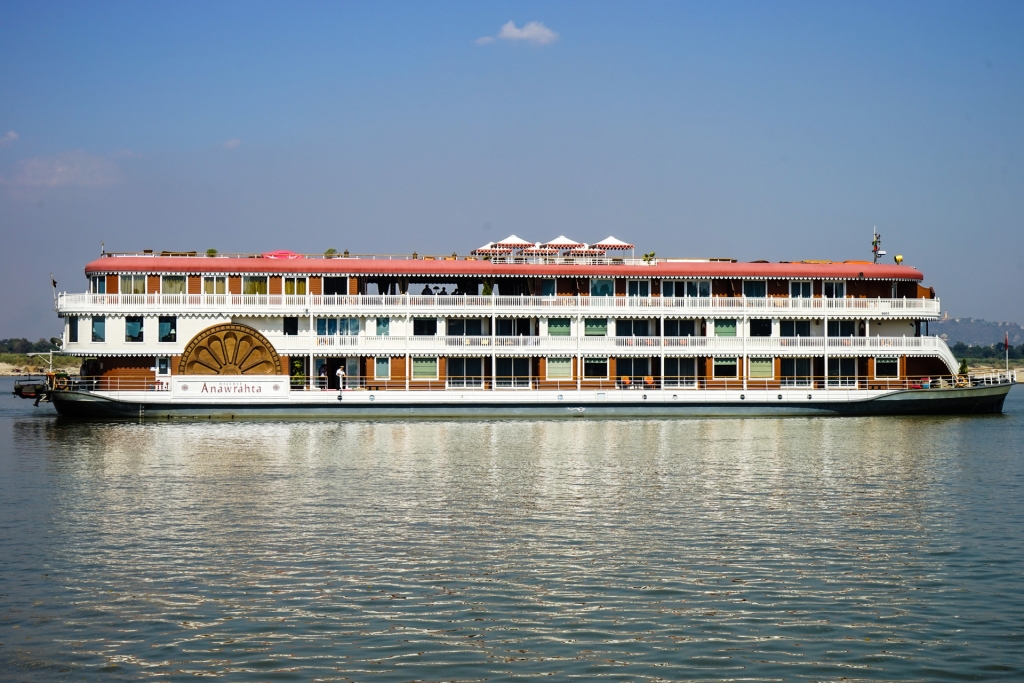 Life Onboard the Anawrahta

River cruising can be a leisurely, luxurious yet surprisingly efficient means to travel, especially in a country like Myanmar, where road infrastructure is lacking and where many of the sights are conveniently located close to the riverbanks. It also means unpacking just once, and paying one price up front for almost everything on the cruise: food, accommodation and tours.

Heritage Line’s Anawrahta is an elegant 214-foot-long vessel featuring three spacious decks and 23 luxurious cabins with the highest staff-to- passenger ratio on the Ayeyarwady. In contrast to most larger ocean-going vessels, river boats typically feel much more spacious, especially the cabins.  My Deluxe cabin measured a very generous 344 square feet with a spacious bathroom, giant picture window with banquette where I spent many an afternoon with a good book, and a balcony to enjoy the early morning cool, coffee in hand. Three larger suite-type rooms are also available, ranging from the 517-square-foot Junior Suite to the colossal Royal Suite with 926 square feet of space including a 312-square-foot balcony with private Jacuzzi. Finishings throughout the ship were stunning, including polished lacquer, intricately carved woodwork, shining brass and original artwork.

The days generally followed a similar pattern, starting with a buffet breakfast with live egg station, pastries, fresh fruit, yogurt, smoked salmon and hot items. Most days saw us taking morning shore excursions, with all logistics meticulously pre-arranged, including various forms of transport, from private coach to horse carts to tuk-tuks. Many of the small towns we visited were blissfully untouched by mass tourism, meaning the locals were almost as excited to see us as we them, always with winsome smiles and friendly waves. After every excursion, we were welcomed back on board with a cool towel, chilled juice and shoe-cleaning service.

In addition to religious monuments and historical sites, we had many opportunities to observe the simple, unembellished country life of the majority of the Myanmar people— farming, trading in the local markets, washing clothes in the river and hand- making everything from Burmese cigars wrapped in corn husks and paintings from stone powder to pounding razor- thin gold leaf and hand-grinding peanut oil. The Myanmar people are exceptionally warm and open, making portrait photography a real treat. In addition, having the two able guides permanently stationed on the ship was a blessing, as we could always ask more questions on what we saw on the excursions.

While the cruise is not billed as a gastronomic cruise, the food certainly rivaled 5-star hotel cuisine. Buffet lunches offered a beautiful mix of Myanmar and international dishes making use of fresh, local products as well as premium imported ones. One curry meal was particularly memorable, featuring all sorts of Myanmar curries, gritty with fragrant spices, highlighted by river shrimp the size of my fist. Fresh salads were also phenomenal, often showcasing Thai, Chinese and European flavors. Four-course dinners were served a la carte, with gourmet offerings like Seared Scallops with Avocado Salsa and Soft Shell Crab Curry as well as Rack of Lamb, Imported Steak and Seared Atlantic Salmon. Meals were taken in the Hintha Hall Restaurant featuring white tablecloths, gleaming glassware and the most attentive of wait staff who greeted everyone by name and quickly learned our preferences, all in a beautiful setting of floor-to-ceiling picture windows, polished wood and intricately-carved floor and ceiling panels.

Afternoons were often spent relaxing on the pool deck or participating in interesting lectures and demonstrations on everything from religion and culture to local customs and practices like how to tie the ubiquitous longyi (sarong), apply thanakha paste (a natural cosmetic preferred by women and children) or prepare tea leaf salad. Kipling’s Bar, open on both sides to the river breezes, proved the ideal place to while away the afternoon hours with daily tea or happy hour cocktails. This and the pool deck above with loungers under canopied tents were the best places on the ship to easily see and photograph both riverbanks.

Many evenings were spent in the lovely Mandalay Lounge with its polished wood floors and cozy rattan chairs, watching after-dinner performances by local artisans brought on board to showcase traditional puppetry, music and dancing. The evening’s final touch was a thoughtful gift waiting in the room—a brass bell, a lacquer box, a woven scarf—often related to a destination we visited that day or would visit the next.

Sailing days were exercises in the brilliant art of doing nothing. My initial panic at seeing no TV in the cabin (there’s Wi-fi on board, but spotty especially away from larger towns) was replaced by hours of languid reading and the dreamless sleep of an exhausting life of leisure, the kind Orwell called “the deep mid-day sleep of chloroform rather than a lullaby.” With hardly anything taller than a palm tree, the Myanmar sky felt enormous and I often sat watching it turn from rosy pink in the early morning to burnt orange in the late afternoon. That, or watching the river widen and narrow while sparkling like diamonds in the sun. By the end of the day, I always wondered where the hours had gone, in between reading, sleeping, watching the ever-changing scenery and trying unsuccessfully to be hungry again by the next meal. Other facilities on board include a pool deck with 360 degree views, a small gym and the Thazin Spa with three massage beds, mani-pedi stations and a steambath.

River cruising usually does not come cheap, especially aboard a ship that is likely one of the newest, most luxurious in Myanmar, but the trade-off is a holiday that’s relaxing, educational and completely worry-free, where every whim is looked after by some of the warmest and most professional staff you’ll ever meet.

n addition to the Anawrahta, which plies the incredibly scenic Chindwin River in northern Myanmar as well  as shorter cruises on the Ayeyarwady between Bagan and Mandalay, Heritage Line also operates luxury cruises in Halong Bay and in the Mekong, between Saigon and Siem Reap, Cambodia. For more, including seasonal specials, see www.heritage-line.com.