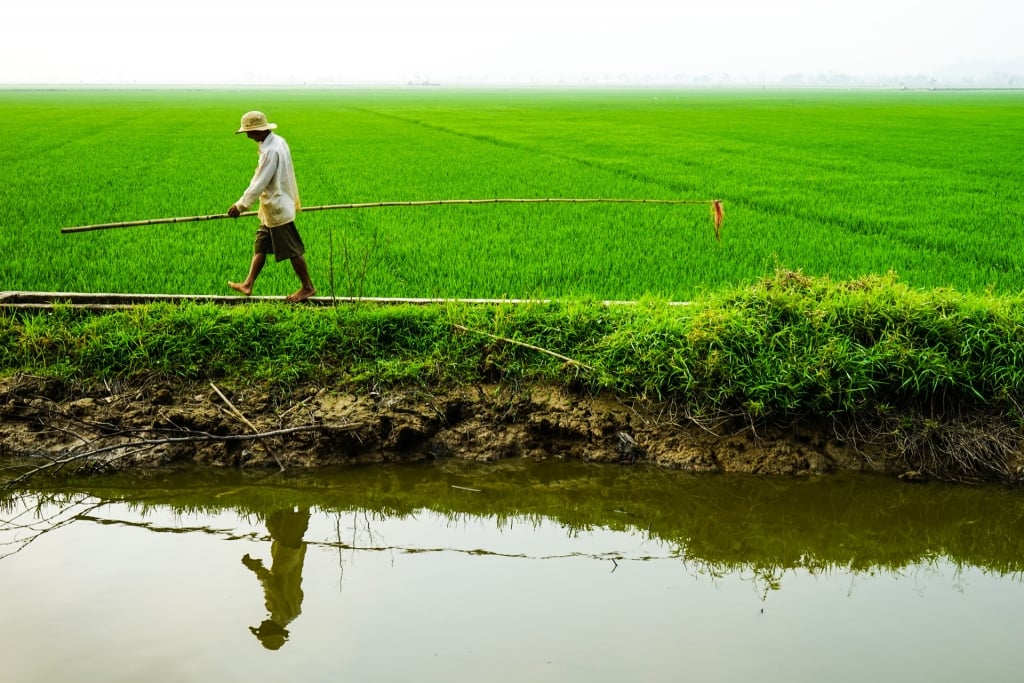 Inscribed as a Unesco World Heritage Site in 1993 for its gorgeous temples, imperial buildings and royal tombs, Hue’s beguiling charms and laid- back vibe are often lost on the millions of tourists who come through on a one-day whirlwind tour of the Citadel in the morning followed by the tombs in the afternoon. In comparison, nearby Hoi An, inscribed as a UNESCO site in 1999, manages to hold on to visitors for several days with its street food scene, shopping, beaches and cultural sites.

To find out whether there is more to Hue than a tired one-day itinerary, I hop on a bicycle and ride the pancake flat coastline with nary a temple or tomb in sight.

Twelve kilometers outside of Hue, I find myself at the Tam Giang-Cau Hai Lagoons, a series of shallow, brackish ponds where the famed Perfume River empties out into the ocean. Stretching 70km, they are some of the largest in Southeast Asia. I trade bicycle for boat and cruise the glassy waters, past fishermen casting their nets and women neck-deep in the water, feeling for clams with their toes. The water in the lagoon averages about 3 meters deep, and the locals set down long bamboo poles into the lagoon bed to form simple channels bordered by nets, creating fish “mazes.” Utilizing the natural currents of the nutrient-rich water, the fish swim along the mazes and into tall traps set at the corners. I watch as fishermen empty the long, cylindrical traps yielding fish, shrimp and other seafood from this serene, watery world. 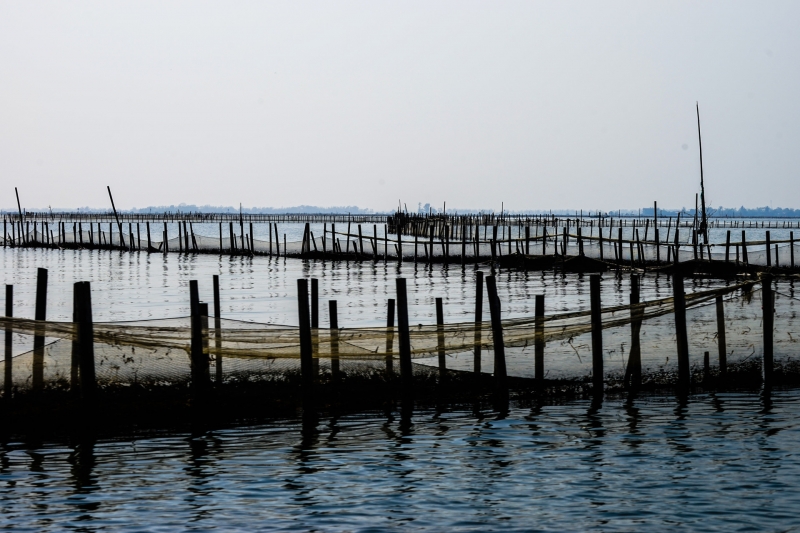 I continue cycling north, past endless fields of emerald green rice paddies, sometimes with friendly school children on e-bikes or curious buffalo for company. Cycling makes it easy to stop whenever I want to photograph a duck herder armed with a long bamboo pole and trailed by hundreds of noisy birds or a curious man holding a bucket, a shovel and a stick. I ask him what the tools are for and he answers with a toothsome grin: “catching field mice.”

I also pass all manner of cemeteries, from simple circular mounds in the middle of a rice field to stupendous “ghost towns,” ornate, over-the-top monuments erected for the dead. While the largest and best-known city of tombs is An Bang, south of Hue on the way to Hoi An, smaller cemeteries dot the landscape. The cult of ancestor worship is strong in Hue and the tomb cities are an expensive extension to the phong tho or “worship room” dedicated to the remembrance of ancestors found in most traditional Hue houses. Thanks to a strong fishing culture, many from Hue were able to make the dangerous journey abroad decades ago as refugees aboard their fishing boats, building new lives for themselves overseas. Thankful to the protection from their ancestors, they now fund enormous tombs as a symbol of piety. 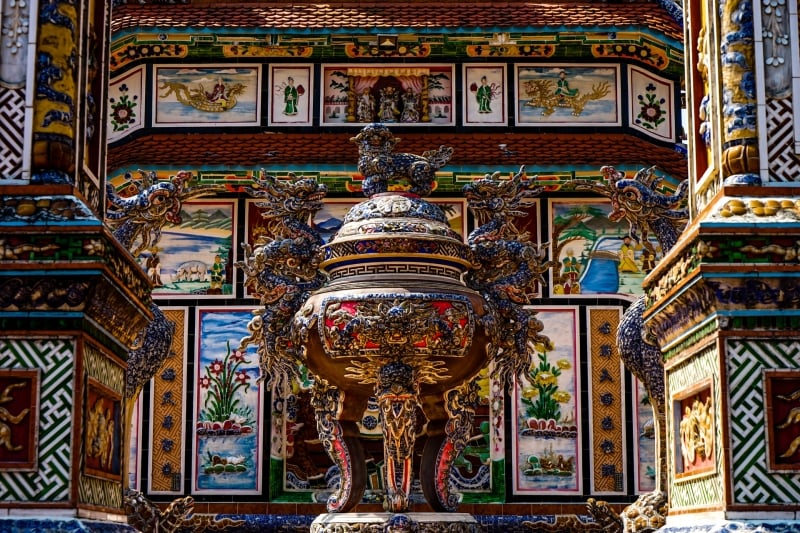 I stop by the cemetery town of Quang Ngan and wander among the colorful tombs beautified by intricate ceramic mosaics. One of the tombs is locally known as “Two Billion,” the cost of the ornate multi-room structure which includes a banquet room for when the overseas owners come back to pay their respects. The tombs are both a source of pride and envy, as vast amounts of overseas money are poured into making each one the biggest, most ostentatious in the village, while living family members struggle to eke out a living, forced to wait until the afterlife to taste a life of luxury.

I continue cycling to the late 15th century village of Phuoc Tich, known for its many nha ruong or ancient houses. Built entirely of wood without the use of nails, the dark homes feature three rooms marked by giant wood pillars: one for men, one for women and one for ancestor worship. The houses call to mind the Vietnamese word for “foundation or keystone,” ruong cot, literally meaning “supports and columns.” The façade is actually a long series of folding doors, ingeniously set on pegs for easy removal to allow the cool breeze in, with sliding panels instead of windows to guard against the winter cold. The residents of the quaint village are mainly senior citizens, left behind to take care of the houses while relatives move closer to the city. Surrounded by trees and water and cloaked in a deathly stillness, it feels like time has stood still here. 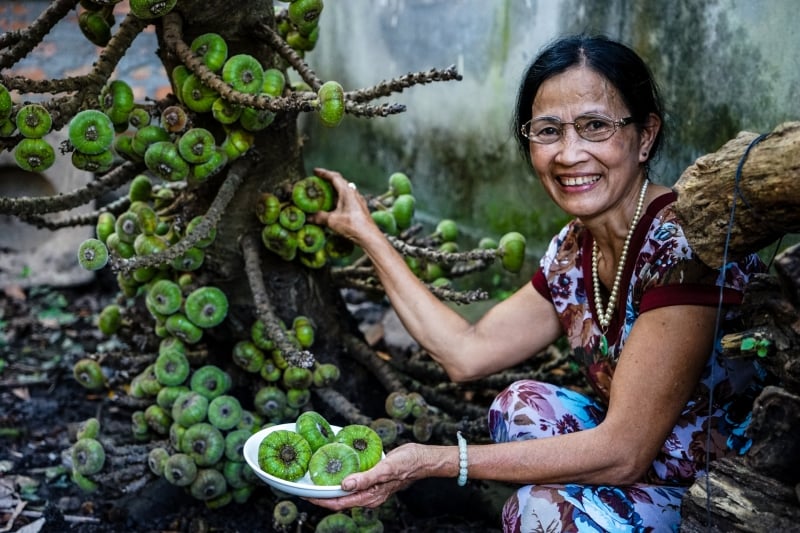 The elderly villagers say living close to Nature is their secret to longevity, eating what you grow. We stop at Mrs. Kieu’s home for a stunning home-cooked lunch that includes a salad made from green figs plucked from the garden and a dessert of sticky rice cake colored dark green with a local, wild leaf. Banh it la gai is known all over Vietnam, but according to Mrs. Kieu, it was her great-grandmother, a cook for the imperial court, who first found this aromatic leaf growing in the area around her home and invented the dish. In Phuoc Tich, even the food has history.

Frogs in March and Chicken in August

Early the next morning, I cycle 8km to the covered bridge in the 15th century village of Thanh Toan. Much less well-known than Hoi An’s Japanese Bridge, the Thanh Toan bridge was constructed in 1776 by Tran Thi Dao as an act of merit so that her fellow villagers would have an easy way to cross the Nhu Y River. The bridge even has built-in bench seating for weary villagers returning from the nearby market. Next to the bridge, the community has erected a beautiful agricultural museum filled with simple but ingenious machines for farming and fishing. One of the plaques proclaims: “Frogs in March and chicken in August.” I have to ask around for the meaning and a local tells me that’s when they taste the best, speaking to the joys of country living. I cycle 10km back towards town to the Tu Hieu Pagoda, nestled in a forest setting at the end of a dusty, red road. Amongst Hue’s 100 or so pagodas, this simple structure has one of the most interesting stories. In 1843, an abbot named Nhat Dinh gave up his position in the court and returned home to look after his ailing mother. When his mother’s condition worsened despite medicine and care, it was suggested that Nhat Dinh add fish and meat to her diet. Ever a dutiful son, he walked to the market to buy those things for his mother, accepting the shame that came from people seeing a monk buying meat and therefore contributing to the death of another living thing. Word got back to the king who praised Nhat Dinh for showing honor to his mother. The king sent money to build the Tu Hieu Pagoda, meaning “filial piety” or the devotion that children show to their parents. 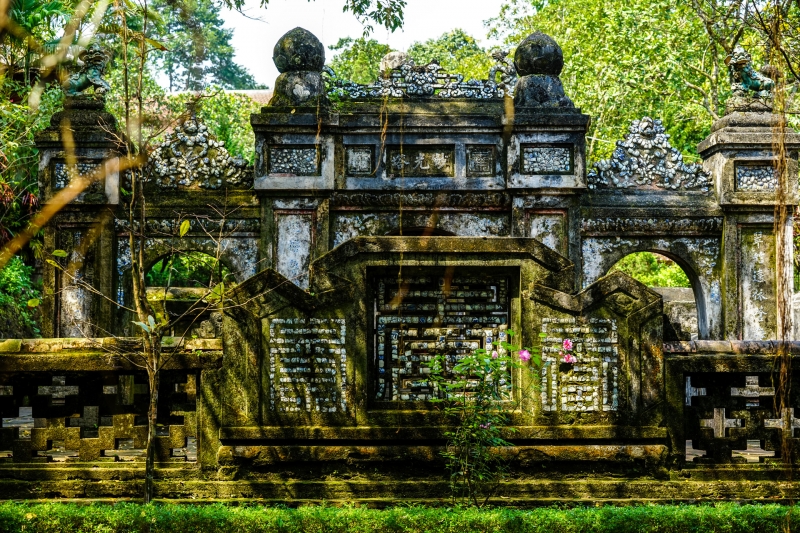 Off to the side of the pagoda are 20 or so tombs of eunuchs who served under the Nguyen Lords. Flush with wealth from controlling which wife or concubine got to spend precious nighttime hours with the king with the possibility of providing a royal heir, the eunuchs donated to the pagoda so that they would be remembered after their death, with no heirs of their own to offer up incense to them.

After two days, my calves are burning and I’m definitely saddlesore, but I’ve discovered that Hue has much more to offer than just temples and tombs.

My cycling trips were arranged by ÊMM Hotel Hue. Completely renovated in October 2016, the bright, cheery 72- room hotel just a few minutes’ walk from the Perfume River and the Hue Citadel features a colour scheme inspired by ancient Hue itself, highlighted by imperial jade and royal purple. A restaurant and poolside bar as well as a mini-gym, spacious reading area and two meeting rooms complete the property. For more, see www.emmhotels.com