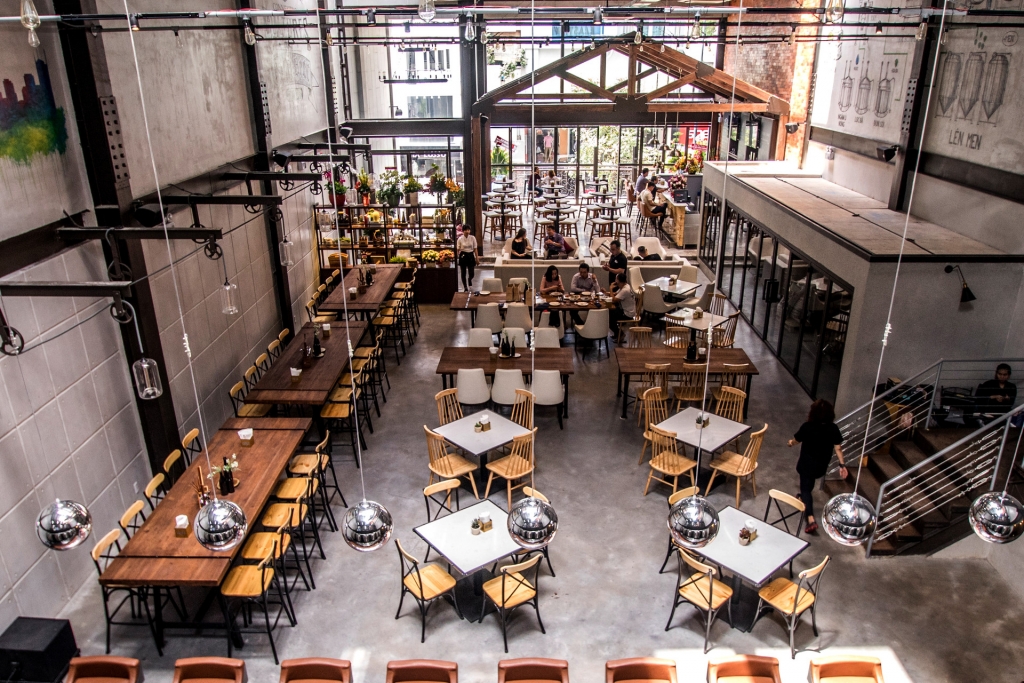 As southeast asia’s most beer-swigging country at about 40 liters per person, the Vietnamese know their brew. With such an established beer culture, does Vietnam really need another brewery?

As it turns out, if the brewery is East West, the answer is a resounding “yes.”

With its grand opening just a few weeks ago in March, East West Brewing Company (181–185 Ly Tu Trong Street, D1) is the latest in the craft beer craze hitting Vietnam. But, like its artisanal handcrafted beer, everything comes with a delightful twist.

All gleaming metal, wood and polished concrete, the huge industrial chic space manages to avoid hipster territory with an upbeat soundtrack and high ceilings, natural light streaming in from the two-storey windows and skylights from the outdoor beer terrace above. Backed by a neat wall of gleaming vats where the in-house magic happens, East West feels authentic in its approach to both its beer and its creative, well-rounded menu.

East West’s logo speaks to its mission, featuring the initials SD and SG on either side of a sailing ship. SD refers to San Diego, one of the top US cities for craft beer with over 120 licensed breweries known for their innovation and creativity and the hometown of Vietnamese- American Founder and General Manager Loc Truong. SG is obviously Saigon, with its equally sunny, thirst-inducing weather and emerging interest in all things culinary. While East West does draw some influences from local culture (try an upcoming Lychee Sparkling Ale, for example), its mission is to connect much broader cultures through beer. East West’s eight core beers include East West Pale Ale, Far East IPA, Summer Hefeweizen, Saigon Rosé, Modern Belgian Blonde, Modern Belgian Dark, Coffee Vanilla Porter and Independence Stout, while its planned seasonal specials hopscotch the globe in the form of a Makrut Lime Saison in time for summer, a Pumpkin Ale for autumn and Double and Triple IPAs for winter, among others. 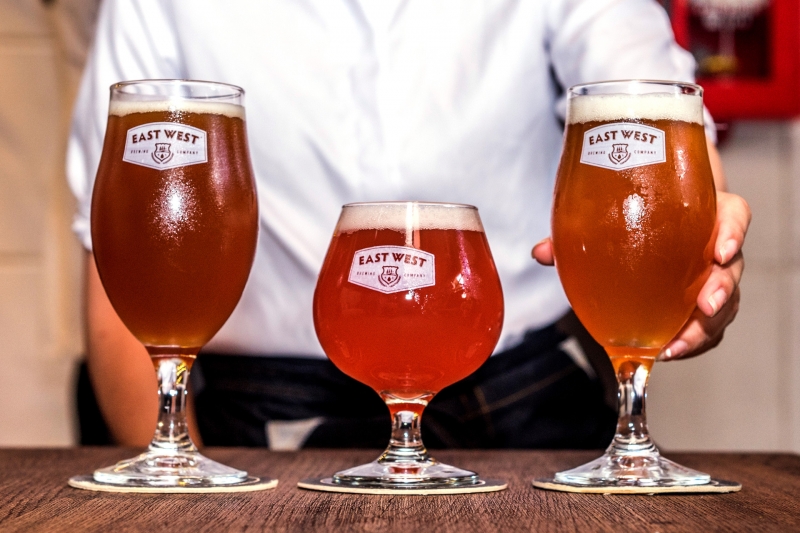 Further adding to the artisanal beer experience is Executive Chef Cyndi Tran’s exciting new menu, featuring thoughtful international favorites that showcase East West’s range of beers, taking into account the unique flavor profile of each beer as well as the “filling” nature of beer versus other types of alcohol. Chef Tran brings to the table a wonderfully whimsical, ethnic storehouse of flavors (her mother is Salvadoran and her father Vietnamese) and experience creating wine and spirits pairing menus in trendy Los Angeles. While beer pairing works off the same premise as wine pairing—lighter beer for lighter meals, heavier beer for red meat and more intensely cooked dishes—the complexity of craft beer lends itself to more precise pairings. East West takes the concept one step further, incorporating its own beer and beer products into the actual food.

We start off with a Grilled flatbread pizza topped with pepperoni, roasted peppers and burrata (VND140,000). The flatbread is slightly darker with a crispy texture, thanks to the inclusion of the slightly sweet spent grains (leftover from the brewing process) ground down to a coarse flour, rich in protein and fiber, perfect for flatbread. It’s washed down with an East West Pale Ale (all beers between VND75,000 and VND100,000 for 330ml), a refreshing transitional beer with hints of lightly toasted bread that complements the spicy pepperoni. 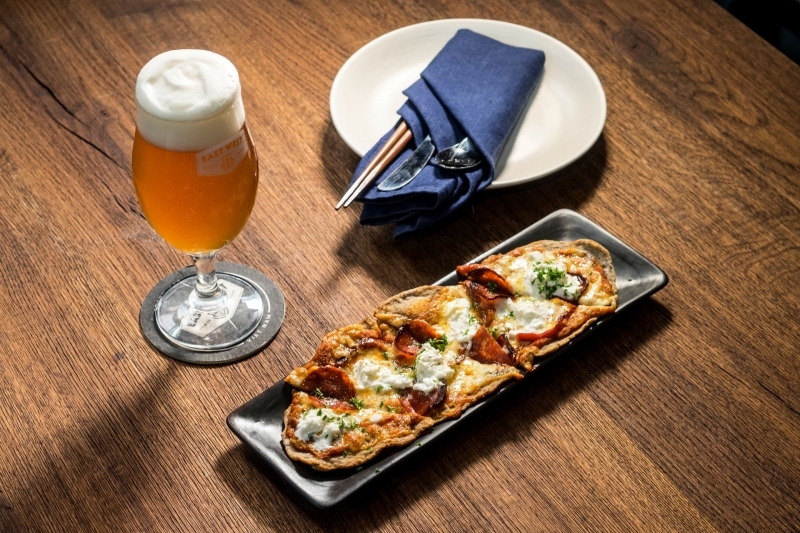 For our mains, we have the Pho burger (VND150,000), which combines the flavors of everyone’s favorite noodle dish (demi-glace hoisin sauce, anyone?) with the meatiness of a burger, paired with a Far East IPA. Higher up on the bitterness scale, the big, bold flavors with just the slightest hints of citrus stand up well to the hearty burger. While the hand-cut fries are delicious, it’s the spicy tomato jam and sweet and tangy house pickles that add bursts of flavor, the latter incorporating Summer Hefeweizen, a German wheat beer with hints of clove & pepper. 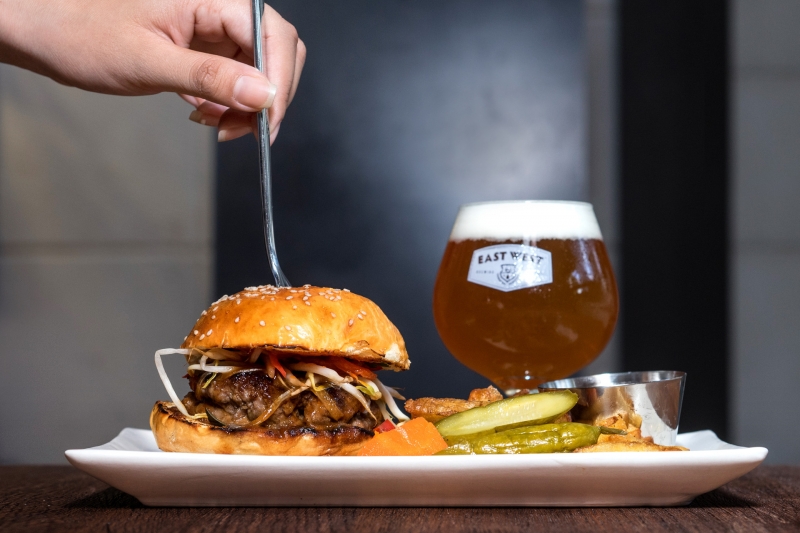 This is followed by a Turmeric ginger salmon fillet (VND195,000) inspired by a fish steamed in banana leaf that Chef Tran once had in Hoi An. She recommends pairing the lightness of the salmon with a Saigon Rosé, a crisp wheat ale with a fresh raspberry profile wrapped up in a sexy, hazy pink hue. 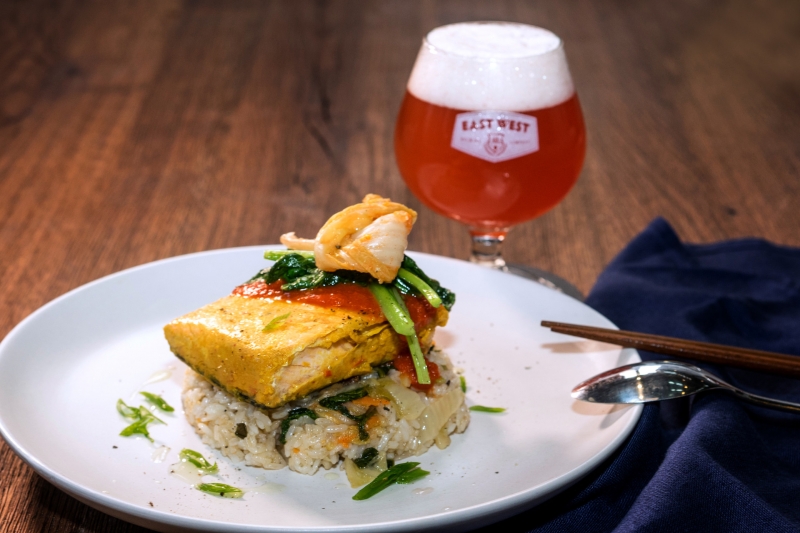 Even the desserts are beer-friendly, and we end up splitting a Beer affogato— two scoops of vanilla gelato topped with Coffee Vanilla Porter, a dark, nutty beer infused with notes of cold pressed Vietnamese coffee (VND95,000). 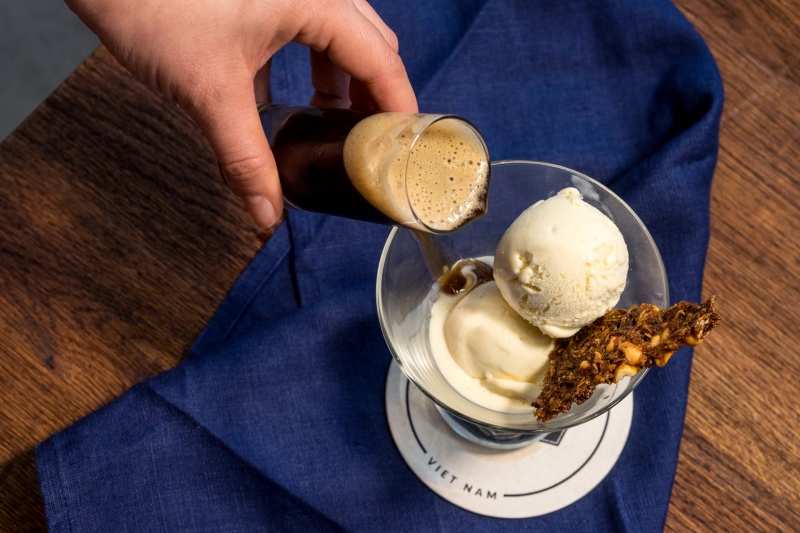 Despite just opening, East West looks to be a craft brewery force to be reckoned with, already hitting the ground running with major buzz, a slick website (www.eastwestbrewing.vn) and plans to expand into Sunday brunches (Kegs ‘n Eggs), live music, and brewery tours and classes.

East West Brewing Company is open daily from 11am to 11pm for lunch and dinner.