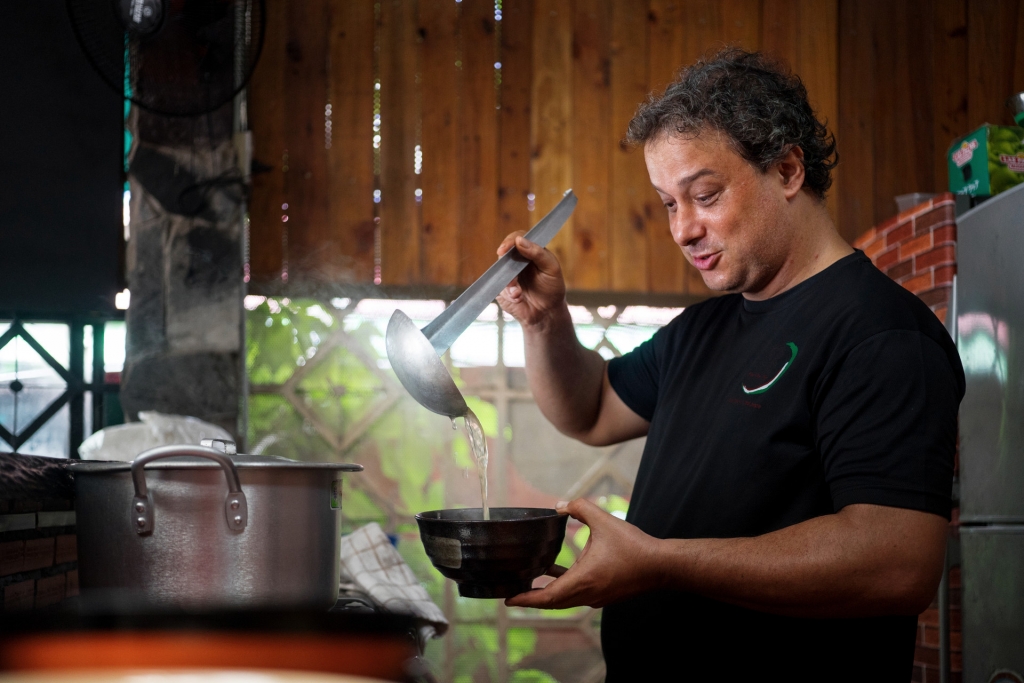 It may be difficult to find Pho Ong Tay (39 Vo Trung Toan, D2), located on the fringes of Thao Dien in District 2, but it’s well worth the effort for an unconventional eatery that’s decidedly delicious. The offerings are widespread—in addition to a thick menu, chalkboards adorn the walls with an assortment of specialty dishes, craft cocktails and fresh fruit juices. While you can stop by for pretty much anything from an English breakfast to an indulgent dessert of chocolate salami in vanilla sauce, the emphasis is on Italian pasta and, as one might expect, pho. Perhaps an unconventional combination, it turns out that these two culinary traditions can pair quite nicely when you have a chef who knows their stuff, and that’s clearly the case here. 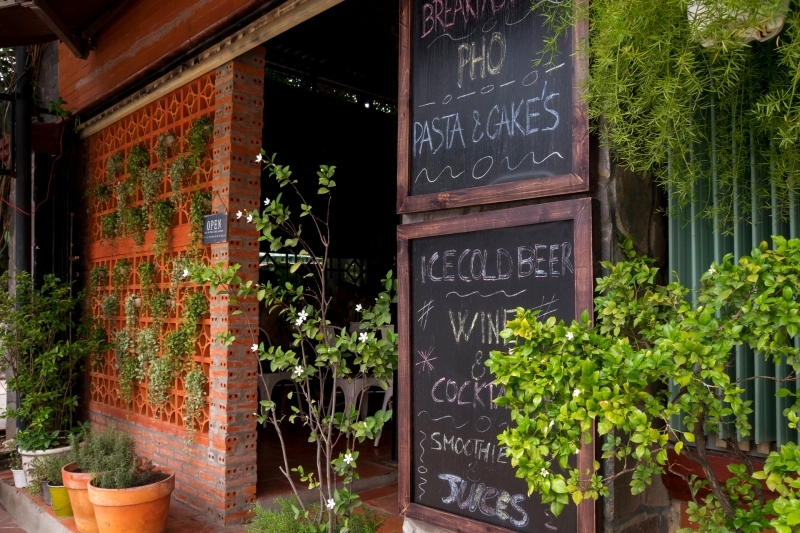 With plantings clinging to brick walls, an open air layout that invites a breeze, and a well-stocked bar, Pho Ong Tay is a refreshingly unpretentious joint serving up breakfast in the early mornings, late night eats until 11pm, and everything in between six days a week (Tuesdays are off).

Starting with a round of beverages, we wetted our whistles with a Peroni (VND60,000) and freshly made apple juice (VND30,000) before jumping into a couple of appetizers that included tomato bruschetta toasted baguette slices topped with tomatoes and a drizzle of olive oil (VND40,000). A bite in and things were boding well with garden-fresh tomatoes and a quality baguette that had just the right amount of crunch on the outside and softness on the inside. 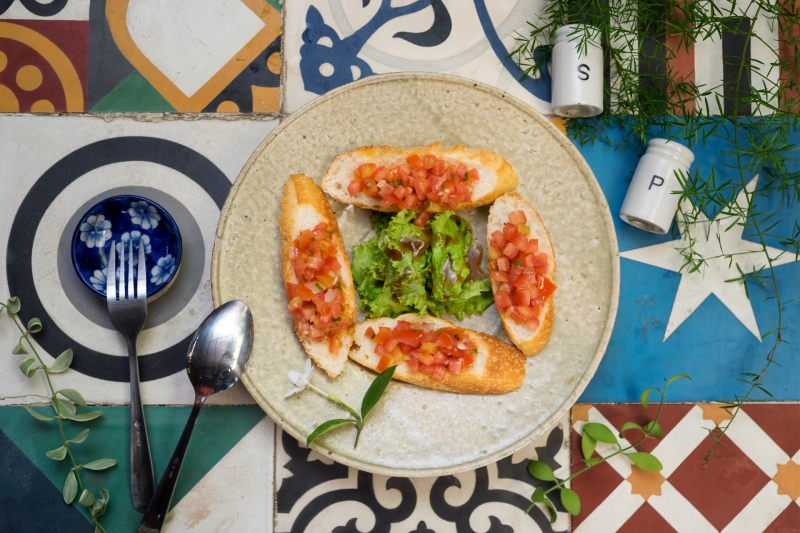 A salmon salad (VND90,000), loaded with veggies, a hard-boiled egg, and salmon marinated in a balsamic sauce, rounded out our starters. Thinly sliced and full of flavor, the salmon was generously portioned in a salad that could hold its own as an entrée. 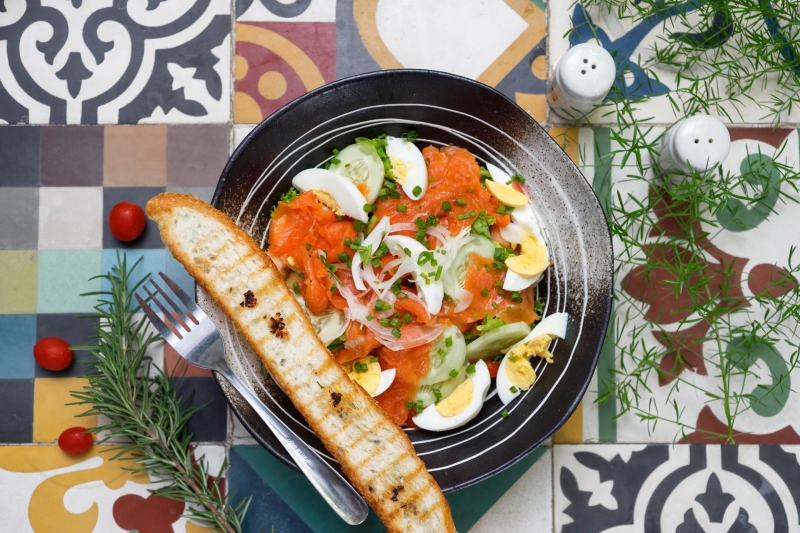 When it came to the main course, the decisions were simply too tough and we deferred to the engaging staff, who directed us toward the special pho with everything (VND60,000) and the homemade gnocchi (VND40,000), which the chef had just made that day, in a creamy pesto sauce with baby shrimp (VND90,000). 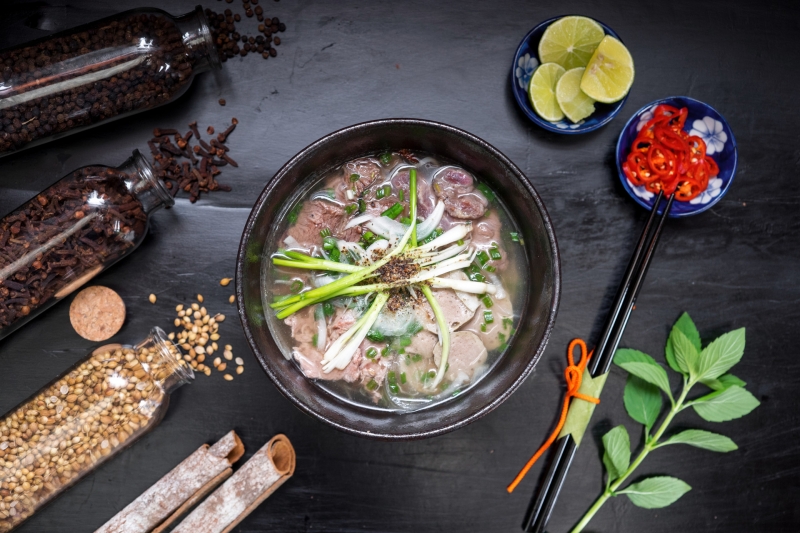 At this point it’s worth pointing out their system of allowing customers to choose their desired type of pasta and pair it with one of the sauces on a wide-ranging list, such as the duck ragout and vegetable sauce or the spicy arrabiata sauce. 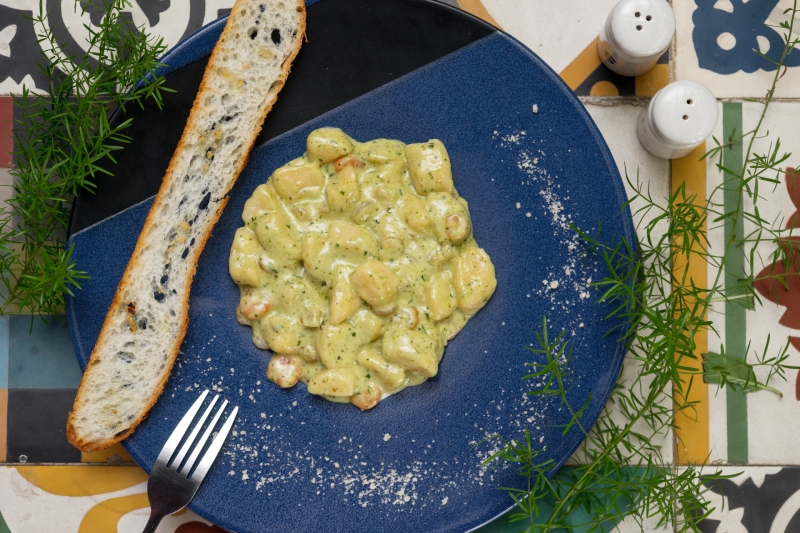 Soft and fluffy, the gnocchi were simply exceptional. The light, little pillows doused in a rich sauce made for a highlight dish that we will undoubtedly be devouring again. The special pho, flavored with an aromatic blend of herbs and spices, had a tasty, almost sweet, kick to it and came with five different cuts of beef. The quality of the meat in particular was what stood out here, as this was not your typical street-side soup. It’s incredible what a difference it makes when a bowl of pho is prepared with tender, not chewy, beef.

Though we didn’t have enough space to try them on this visit, there were a few creative pho twists on the menu that caught our eyes, specifically the Thai-inspired tom yum pho and the salmon pho. Come the next late night craving, we know where we’re heading.

What we did, of course, have enough space for was dessert. Navigating a mouthwatering list that included a dark chocolate mousse served with spicy mango sauce, as well as a traditional lemon panna cotta in chocolate sauce, for this final round we opted for the classic tiramisu (VND60,000) and have absolutely no regrets. 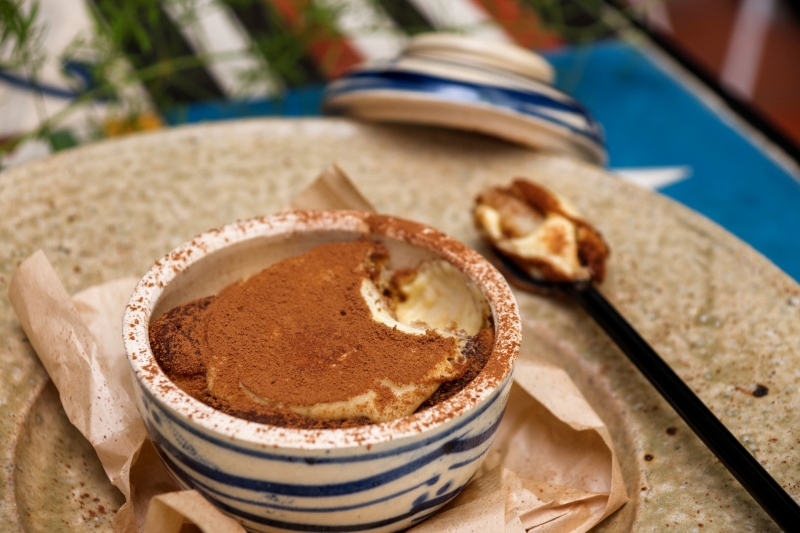 Served in a clay pot, the layered textures of custard and cake dipped in coffee and topped with cocoa powder provided us with just the right pick me up. At the chef ’s recommendation, we couldn’t say no to pairing the tiramisu with a Budweiser Budvar Dark Lager (no, not the watery American beer, but rather a Czech Republic brew) that proved the perfect way to wash down the dessert with a crisp libation. In the end, it was a meal that left our stomachs happy, especially knowing that we had found a new haunt with quality cuisine in a friendly and casual atmosphere.