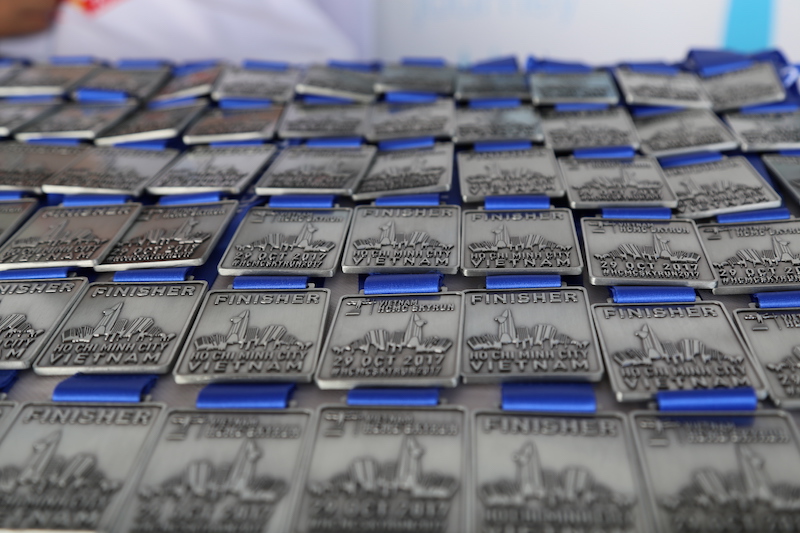 Oi caught up with Sophie Clarke, winner of the female division in the HCMC SKYRUN, to find out how she’s doing after climbing 1,002 steps 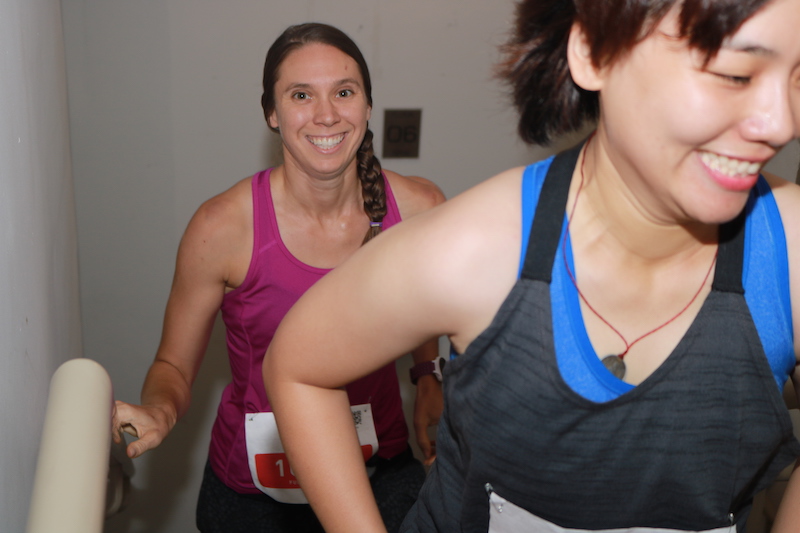 Hundreds of athletes competed in the HCMC SKYRUN at Bitexco Financial Tower on October 30, 2017. Local and international runners alike took to the stairs and conquered the skyscraper by  running up 1,002 steps to the finish line at the Saigon Skydeck on the 49th floor. Robert Sesemann of Great Britain won the male division, setting the overall fastest time up the city’s tallest building in 6 minutes and 49 seconds. Local hero Minh Tan Nguyen of Vietnam placed second, 3 seconds behind, clocking 6 minutes and 52 seconds. Florian Deichmann from Germany  came third. In the female division, Sophie Clarke, also from Great Britain, climbed to victory, finishing in 7 minutes 22 seconds, beating Vietnam’s Chi Nguyen by 24 seconds.

You’ve never done a vertical run before, what made you decide to take on the challenge this year?
Actually, there were a few reasons why I ended up joining the event. I was already aware of it because I’d spoken to David, one of the organizers, about our company, Bikelife, potentially sponsoring the event. While we couldn’t this year, it definitely put the event on my radar. However, it wasn’t actually until the Tuesday before the event that Marcel, from Run Club VN,  asked me if I’d registered yet. I’d just finished a full Ironman in Taiwan in October so I was trying to take it easy (trying and failing, like usual), however, when Marcel said that Maple Healthcare would sponsor  mine and my friend Nikkola’s bibs I thought, ‘Oh, why not.’ And I’m so glad I did. Plus the event starts later than most, so it meant that Nik and I could have a lie-in, have a relaxed drive into D1 and grab some breakfast and a coffee before the race. 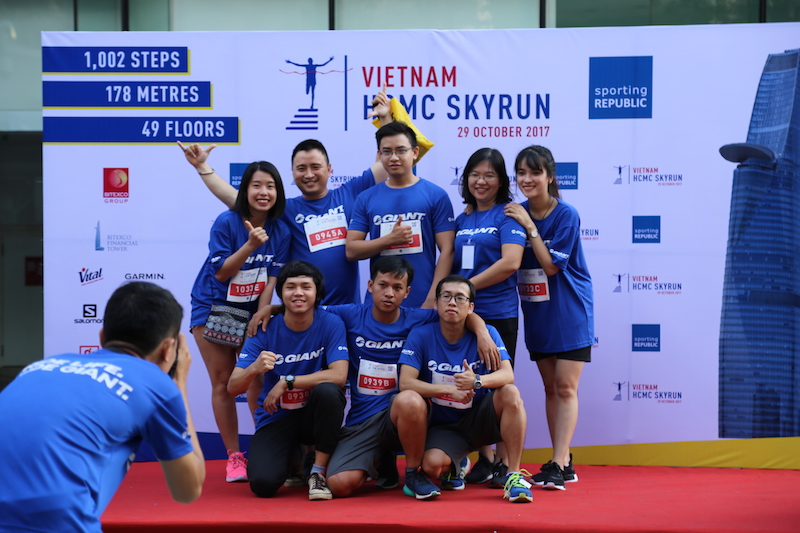 How did you prepare for the vertical race both mentally and physically?
Well physically, I was supposed to still be recovering from a full Ironman. Me and Nik had climbed the stairs a few times back in September when it was raining so much, so I had a rough idea about what to expect pain-wise (burning, all the burning). Mentally I just went in with an open mind. The events I’m used to usually involve hours of moving, whereas this race is over in under 10 minutes. So, to be honest, I wasn’t expecting much. I used it as an opportunity to have a catch up with all of these familiar faces from the running community who I only end up seeing at local events. It was only in the five seconds before my wave started that I put on my game face and thought, ‘You’ve got to smash this.’ 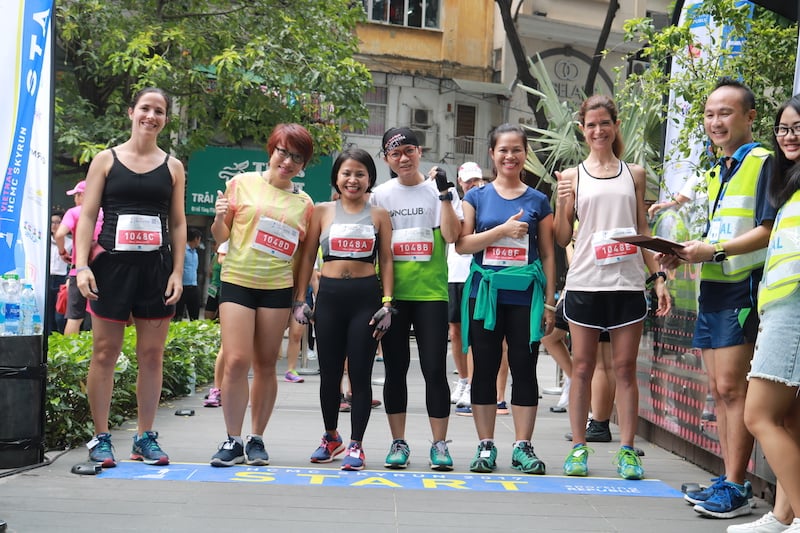 Do you believe your career in cycling helped you physically when training for the SkyRun?
Yes. Cycling is 100 percent what made me a contender in the SkyRun, although I only realized it afterwards. Before the race, I thought, ‘Ah this isn’t something I’ll be good at, I’m too heavy for climbing.’ But actually, for starters, regularly cycling can get you super fit, and you’re also using a lot of the same muscles groups for stair climbing as you do in cycling. It felt like I was doing a really hard, fast time trial.

At any point going up those stairs did you think you wouldn’t make it? What kept you going?
I did start to see stars at one point, but it was around the 35th-40th floor mark, so I just thought, ‘Come on Soph, just keep going. You can pass out after the finish line.’ (Which I almost did.) In the 7 minutes and 22 seconds it took you to reach the top, what thoughts were going through your head? Were you counting down the number of steps left? I can’t really remember much other than seeing a sign that said the end was at the 49th floor and thinking: ‘What!? Someone told me it was 48! Liars!’ I felt like I’d been duped by the extra floor I had to climb. Other than that I had my usual ‘motivational’ words going through my head, which sound more inspirational than what they actually are: ‘Come on, come on, come on!’ and ‘Just >insert floors/kms here< left’. I think “just” helped me kind of deceive myself into thinking it’s not as far as it is. It makes you feel more capable. 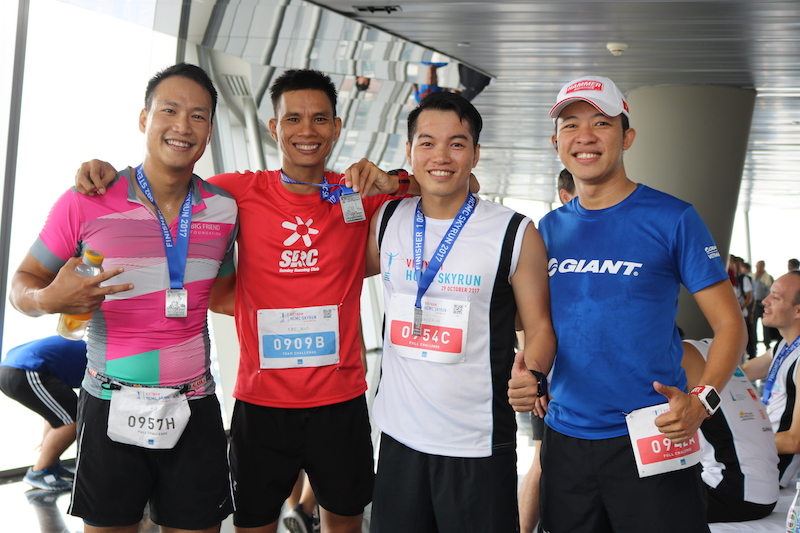 What did it feel like inside the stairwell with hundreds of others in front and behind you? Did it feel claustrophobic?
Actually, and this really impressed me about the event organization, there wasn’t a point where I thought there were too many people in that stairwell. The organizers set everyone off in waves of 5 people, with 3 minutes between each, so it meant that I didn’t really need to overtake many people, just a few stragglers who I panted ‘excuse me, excuse me’ to as I went past.

At the end, what part of your body hurt the most, I assume your legs? What did you do after your win?
Believe it or not, my legs were absolutely fine. It was my chest and lungs that were in pieces. I think the air in the stairwell was pretty dry, and I was breathing really heavily going up, so by the time I got to the top my chest was completely on fire. I felt like I’d smoked a whole packet of cigarettes or something. I was coughing for the rest of the day. After the awards ceremony I celebrated in  style by…erm… rushing to work. I was really late! Luckily, they forgave me.