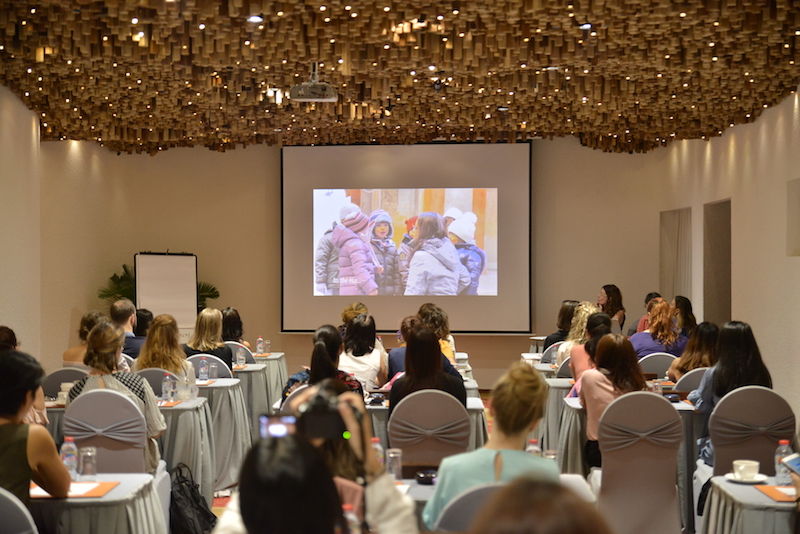 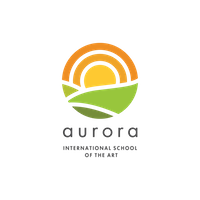 The children are at the center – strong, capable and resilient; rich with wonder and knowledge

This January, guests of Aurora International School Of The Arts (www.aurorareggio.com) were treated to a fascinating presentation by visiting Pedagogistas Tania Bertacchi and Alessandra Ferrari, experts in the Reggio Emilia approach practiced at the school. Those who attended had the opportunity to learn more about how this small-town Italian philosophy of education has become such a well-developed set of values regarding children that are shared between all people who work to implement this approach—not only teaching staff, but also the parents, the families, and everyone participating.

The presentation was an opportunity to learn more from the visitors to the school, but it was also a forum to share experiences. After the conference where the Pedagogistas presented and declared their philosophy and their own variation on the approach, participants joined together for sharing, professional development, visiting the school, meeting the teachers, and openly reflecting on the approach as a group. 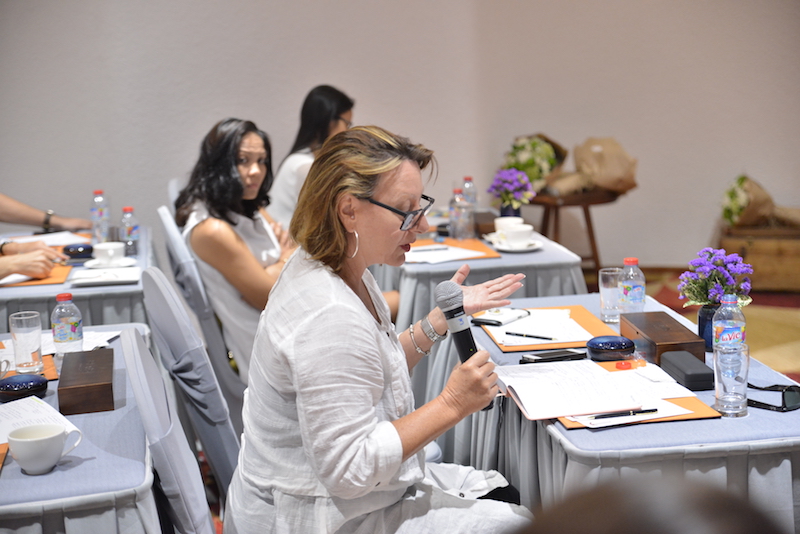 The core of the Reggio educational philosophy is that the child is at the center. It’s the child who has the right to be listened to; who is trusted and considered competent. This stands in contrast with the traditional school system, where the child is thought of as an empty box to be filled up with information, and the teacher has the information and puts it inside the empty child.

“We believe the opposite,” explain the Pedagogistas. “We believe that the child is competent and full of things that we can, as facilitators, pull out. The child expresses his own ideas, his own points of view about the world, his own theory. So he is able to create, elaborate on his own theories; he’s able to cooperate with others, to learn with others, build knowledge in a social environment as a social construct. The adult is listening to the child, creating contexts for sustaining learning possibilities and opportunities. So the adult doesn’t follow a program with a journey that is pre-established, but is working through projects.” 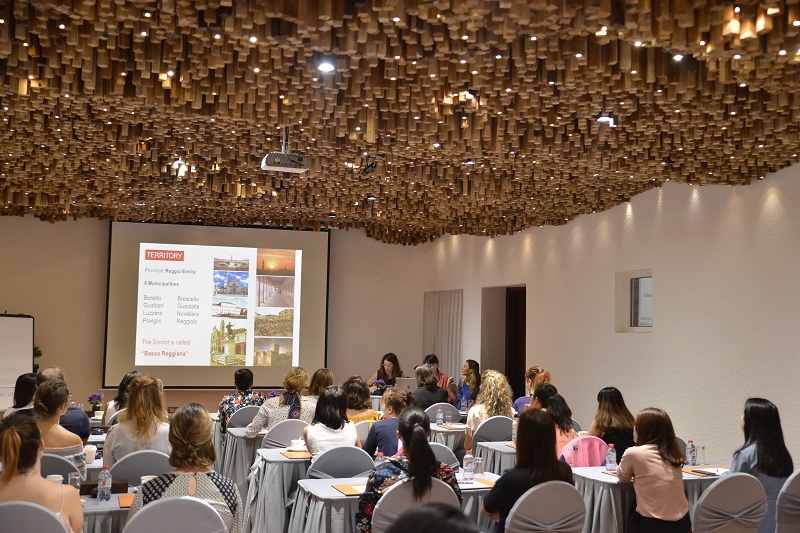 One of the features of the Reggio Emilia approach is that it is adapted in every place where it is practiced, based on the notion that the environment also plays its role in educating a child. Each implementation of the approach is a “translation” that is derived from the region where it is practiced. One of the first observations made by the visiting Pedagogistas was that Aurora is an international, multicultural environment, making the approach here very inclusive, both in holding different cultures within it at the same time and in being open to cultural differences.

“It’s very aware of what is being implemented,” they commented, “and the Vietnamese culture is really intertwined with the traditions of whatever is being done.”

Reggio Emilia is a system where every person who is part of the journey is growing. Not only do the children learn from adults, but also adults have much to learn from the children. According to Ms. Alessandra, children can teach adults “never to stop to wonder, that nothing is obvious. There are different points of view and new perspectives; we are going beyond stereotypes. We as adults are closed, we are not always open to the world and we have lost the capacity to go beyond. If we can really listen to children, we can reclaim this way to look at the world. We become more facilitators and not protagonists as adults; we don’t create direct learnings but contexts that stimulate the learning possibilities of the children.”

The Reggio Emilia approach implemented at Aurora is in line with modern scientific research that children best explore their possibilities when stimulated through contexts.

“It’s not simple learning, it’s not an island,” explained Ms. Tania. “You know that other schools are separated into disciplines—but no, every learning is intertwined with its relationship within the group. Gardner [a Harvard psychologist] talks about the multiple intelligence theory, saying that learnings do not occur in isolated areas like disciplines; they are intertwined and interconnected. In neuroscience, the latest pedagogical discoveries put the child in the center. So teaching different disciplines to children can’t be the aim, because they are going to learn these different disciplines anyway in their lives. It’s more important to teach them how to learn to learn, how to make associations, develop lateral thinking, divergent thinking, to find a new solution and solve problems. They learn skills as capacities, abilities for the rest of their lives—life skills, social life, cognitive skills. This is the basis for all the other learnings.” 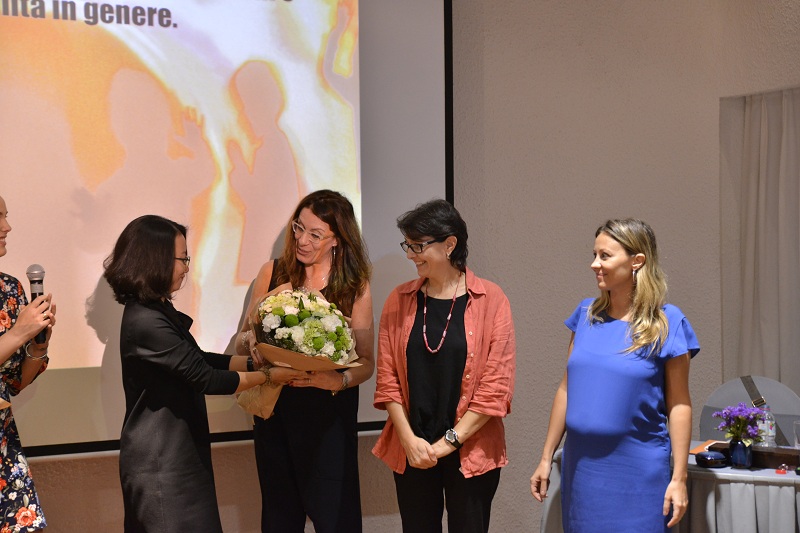 Both of the visiting Pedagogistas are intimately familiar with the Reggio Emilia approach, having been working for many years as teachers in Reggio schools following graduation with degrees in pedagogy. Both have been working as pedagogical coordinators in the same coordination group for more than a decade.

“This approach started to develop in the 70’s when the schools started to get more municipal,” explains Alessandra. “That’s when the positions of Atelierista and Pedagogista were born. The first sprouts were in the 60’s with a Pedagogista called Loris Malaguzzi, but then it took 10 years to develop into a proper approach. It was developed in Reggio Emilia because of the cultural historical political context, and so that’s why we call it an approach—because we can’t copy it in another place that has a different cultural background, it has to be wisely intertwined with the culture of the place where we want to implement it. Everything is deeply interconnected with the base territory, that’s why it’s so important. Because we are part of a larger system that is interconnected with the territory, wherever we are.”

Shortly before their departure, the two pedagogistas affirmed that they felt richer with more knowledge that they would share with their colleagues upon their return to Italy, opening new reflections together about education. For the visitors, gaining a perspective on other realities—and interconnecting with those realities where the approach has been translated in a different environment and territory—has brought about welcome opportunities to reflect on their own work.

Images by Aurora International School Of The Arts