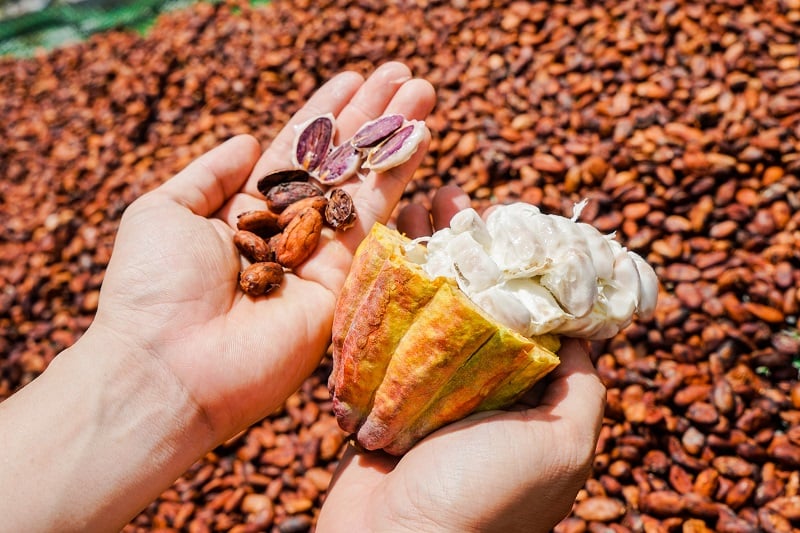 The Chocolatiers of The Mekong Delta

Exploring the past and future of Vietnamese chocolate

The Vietnamese have a saying: Phi cua Troi, muoi doi chang co, meaning “Waste what God gives you and the next ten generations will go without.” Likely no one has mastered the art of multi-purposing quite like the humble people of the Mekong Delta where absolutely nothing goes to waste.

In a small riverside workshop just outside of Vinh Long, a handsome older  woman uses a ladle made from a coconut shell to pour rice flour batter over a piece of cloth stretched over a steamer. Her silvery hair is pulled back tight, revealing flawless skin that belies her seven decades. With practiced flicks of the wrist, she deftly coaxes the delicate rice flour crepe off in one piece, setting it on a bamboo mat to dry. 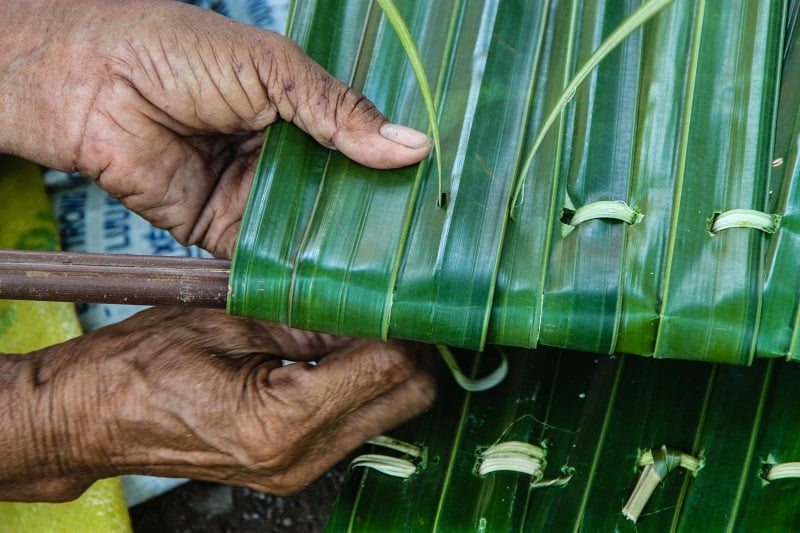 Nearby, a family member uses discarded rice husks to feed a fire. Over it, she heats up sand in a large wok into which she throws a handful of unmilled rice. The kernels soon explode like popcorn, erupting into a fireworks display of fluffy white projectiles, ready to be mixed with ginger and sweet rice malt to make a tasty puffed rice treat.

In the Mekong Delta, rice is the gift that keeps on giving. The stalks of the rice plant are dried and used as animal fodder, the husks as kindling, the ash as fertilizer and the kernels as food or cooked into malt. It’s the same with coconuts, another staple here. Tree trunks are carved into utensils, palm leaves are woven into thatch, and the juice, milk, flesh and shells of the coconuts themselves have dozens more uses.

While rice and coconuts are familiar sights in the Delta, it’s another crop with multiple uses that’s brought me here today, one not typically associated with Vietnam—cacao.

While most of the world grows the hardier and higher-yielding variety of cacao called Forastero, Vietnam’s finer Trinitario strain is a hybrid of Forastero with the more flavorful Criollo. The green, yellow or red shells can be shredded and used as substrate for growing mushrooms and the tartly sweet, almost mangosteen-like flesh can be eaten or made into alcohol. However, it’s the beans inside which command the most value. After fermenting, drying and roasting, the cocoa nibs are then ground and pressed, yielding cocoa liquor (used for making dark chocolate), cocoa butter (used for white chocolate and cosmetics) and cocoa powder. 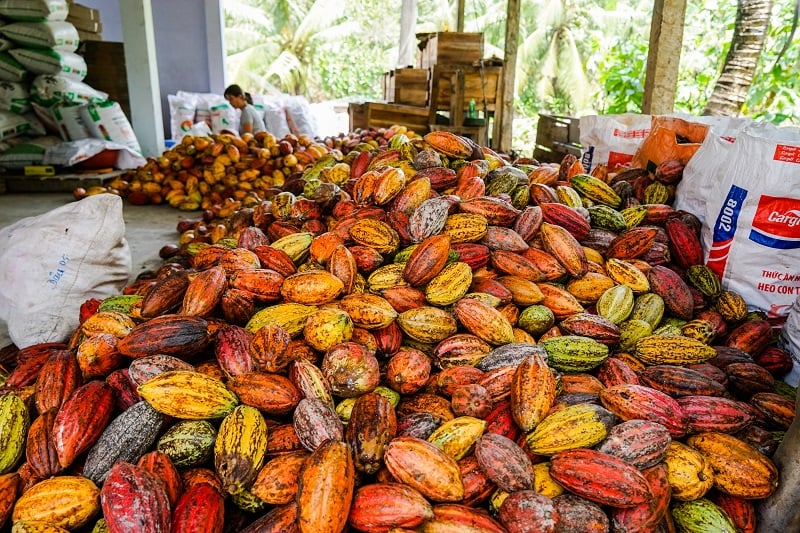 Originally introduced by the French in the late 19th century, the fate of cacao in Vietnam has waxed and waned over the last century or so. In colonial times, cacao gave way to more profitable crops like coffee and rubber. There was renewed interest in the 80s, but potential European and Russian buyers faded amidst the tumult brought about by the collapse of the Soviet Union and the fallof the Berlin Wall. In the early 2000s, NGOs, foreign development programs, local government and even Big Chocolate tried to revive Vietnam’s cacao industry by subsidizing seedlings and providing technical support to farmers. Since then, fluctuating cacao prices have led to many farmers in the Delta cutting down their trees to make room for pomelos, the new cash crop.

To better understand cacao’s past and future, I travel to the Delta to visit two extraordinary men who have found a way to temper the uncertainty of cacao farming by taking cacao production all the way to the finished product. Both in their late 60s, the two share remarkable similarities in a decades-long love affair with chocolate but also startling differences in outlook as to the future of cacao in Vietnam.

The Fruits Of Their Labor
At the Muoi Cuong Cacao Farm and Homestay just outside of Can Tho, I sit down with Mr. Lam The Cuong, one of the earliest cacao farmers in the area. Easily tired from a stroke a few years back, he’s initially surly at having to entertain guests so close to lunch time. However, over shared glasses of rich hot chocolate from his own farm, he begins to relax. 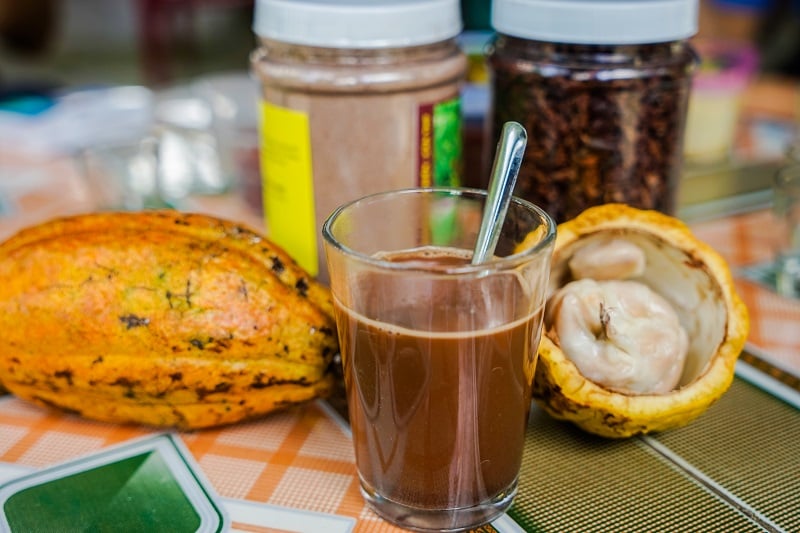 “We first started planting cacao in the early 1960s,” he recalls. “Under President Ngo Dinh Diem, cacao pods were obtained from Malaysia. Each fresh fruit was incredibly expensive, worth about 160 kg of rice at the time. We started with 300 plants, but when they started producing fruit, no one knew what to do with them. There was no demand and it’s not like you can take them to market to sell. Then came the war. So people started cutting the trees down. My father, however, saw something valuable in these cacao trees. He gave me a book in French called Le Cacaoyer. From then on, we simply used the cacao at home, making chocolate at Lunar New Year and on other special occasions.”

More than 50 years on, his small 1.2 ha farm is still home to 2,000 or so cacao trees, a couple from the 60s. With the help of some rudimentary machines including a wood-burning hand roaster, he produces a small quantity of chocolate bars, cocoa powder, and roasted cacao nibs, just enough to sell to guests at his homestay and the odd tourist who wanders in.

“I’ve tried to quit cacao many times, but have always come back to it,” he says over a sip of homemade cacao cider, a sweet, lightly alcoholic beverage made from the flesh of the cacao fruit. “A few years ago, cacao prices bottomed out and it wasn’t even worth it for farmers to hire people to pick the fruit; they just rotted on the trees. Foreign companies pulled out. Now everyone’s abandoning cacao for pomelo. 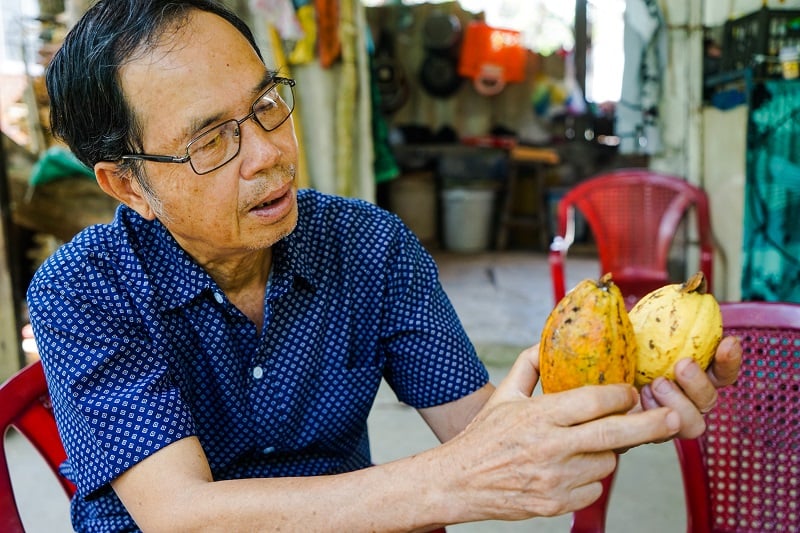 “I’m getting old now and my own children aren’t interested in cacao. A cacao tree takes up to three years to produce fruit. My children belong to the ‘instant noodle’ generation. They’d rather have money now by working construction or having a regular job. In a few years, I’m afraid there will be no cacao left in Vietnam.”

While cacao may have lost its chocolatey-brown luster for some, others continue to be drawn to its timeless allure. “I’m not a normal guy. I do the opposite of what others do,” says Bui Durassamy, owner of Kimmy’s Chocolate, a small upstart chocolate company in Tien Giang.

“When I moved to Canada 40 years ago, I started out doing odd jobs— washing dishes, delivering pizza, doing janitorial work. Since it was mostly night shifts, I had time during the day to take short courses and one of them was on food manufacturing, including chocolate.” 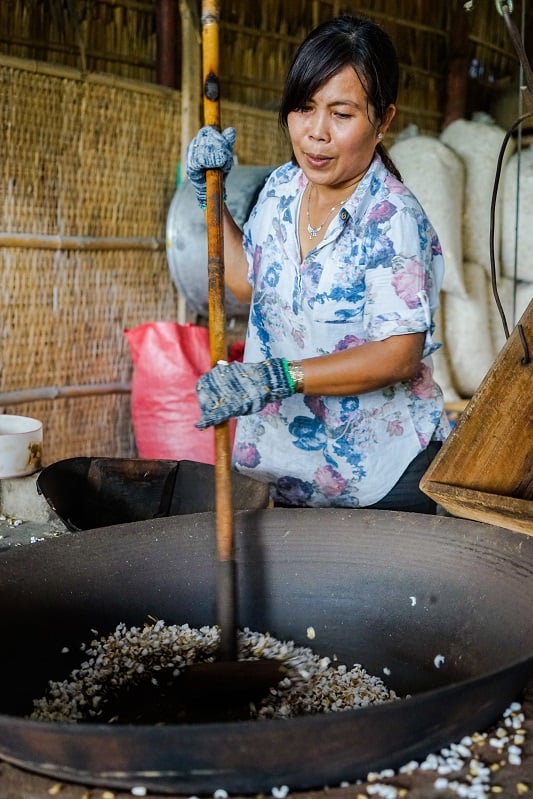 When “Samy” moved back to the Mekong Delta three years ago, he noticed his neighbors were all cutting down their cacao trees. Pairing his background as an engineer with what he remembered from the course he took decades ago, Samy decided to build his very own chocolate factory in his backyard, making his machines from scratch.

“Why not?” he says with a toothy smile. “People can open a restaurant without knowing how to cook. I thought that if I did something that no one else was doing, I’d have no competitors,” he laughs. “Why can we Vietnamese grow cacao but not process it? My goal is to help my neighbors have income by buying their cacao and showing them it has value. Unlike other fruit, you can store the seeds until the price is right. The fruit doesn’t have to be perfect because you’re only using the seeds. They also need shade, so cacao trees can be planted on the same piece of land as coconuts or mangos, doubling your income. They’re also easily maintained, only needing pruning and fertilizing twice a year.” 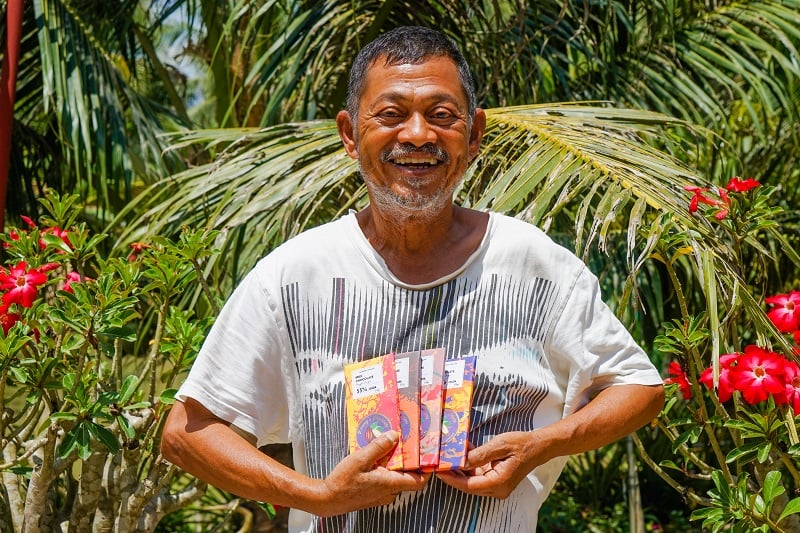 Surprisingly, the biggest risk from his chocolate endeavor so far hasn’t been dwindling interest in cacao or even the volatile cacao market. It’s his wife, Kim, who’s due for her first visit back to Vietnam next week. “She wasn’t happy when I took our retirement money to invest in this factory,” he admits. “That’s why I named the chocolate after her. But I know that once she tastes it, she’ll fall in love with it just like I did.”

These cacao farms can be visited on the 2 day/1 night “Mekong Delta and the Road to Chocolate” tour offered by EXO Travel. Additionally, explore the Delta by boat and bicycle, with visits to home workshops, the Cai Rang Floating Market, lunch in a historic heritage home and more. For more info, visit www. exotravel.com