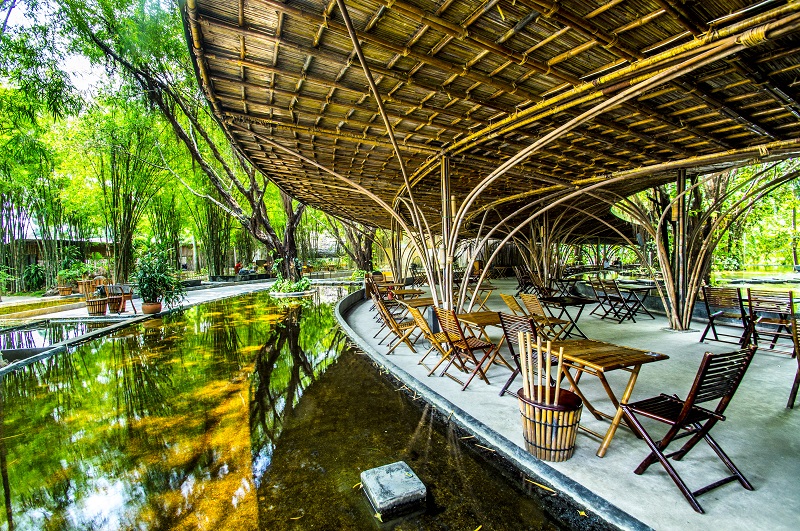 It Takes a Village

For centuries, the Vietnamese have seen themselves in the hardy, strong, ramrod straight plant, a fitting symbol for the strength and resilience of the people. The fact that bamboo grows in clusters speaks of the nation’s solidarity.

Throughout the ages, the lowly bamboo has found its way into Vietnamese poems, folk tales and idioms. A young, mythical Thanh Giong used sharpened bamboo poles to repel foreign invaders. “Their stems are thin, their leaves slender, but they can become ramparts and citadels,” goes the famous poem Vietnamese Bamboo by Nguyen Duy. “When the bamboo is old, sprouts will appear,” says another proverb, highlighting the importance of the older generation paving the way for the new. And who can forget the moral of one bamboo chopstick being easily broken, but the strength in numbers of an entire bundle of bamboo chopsticks?

Not only is the plant symbolic, it’s incredibly practical, used to make everything from the essentials of housing and furniture, fish and bird traps, utensils and boats, to the artistic, including musical instruments and paper, not to mention its nutritional and medicinal value.

On a particularly muggy morning, we find ourselves walking through a shady grove of bamboo at the 10-hectare Phu An Bamboo Village, guided by Jacky Gurgand, an octogenarian Frenchman. An agricultural engineer, Jacky has been coming to the village several times a year since it was founded by his student, Dr Diep Thi My Hanh, in 1999, to help with the irrigation of the property and the nomenclature of the 350 specimens housed there.

“Feel this one,” he says. “We call it Miss Saigon, the Beauty Queen of bamboo.” Sure enough, the bamboo is silky smooth to the touch. A little further down, we arrive at another clump, this one with a gritty sandpaper-like exterior.

“Mr. Saigon non rasé (unshaven),” he says with a mighty laugh. Throughout the morning’s visit,

Jacky introduces us to many of the 101 varieties of living bamboo at the village, a dual purpose ecomuseum and botanical conservatory dedicated to all things bamboo located 40 km north of Saigon, in Binh Duong Province. He shows us the incredible diversity within the bamboo family: a species that grows sturdy perpendicular branches making it a natural ladder, one that has thorns which villagers use to build corrals for livestock, and a painted variety, yellow with perfectly straight green streaks, looking like drips of paint.

Jacky has personally measured one species on the property which grew 80 cm in one day (bamboo is the world’s fastest growing plant, with certain species able to grow 91 cm in a 24 hour period), which leads him to mention Bamboo Torture, the alleged practice of fixing a prisoner above a sharpened piece of bamboo and allowing it to grow straight through the body (affirmed as possible in a 2008 Mythbusters episode). 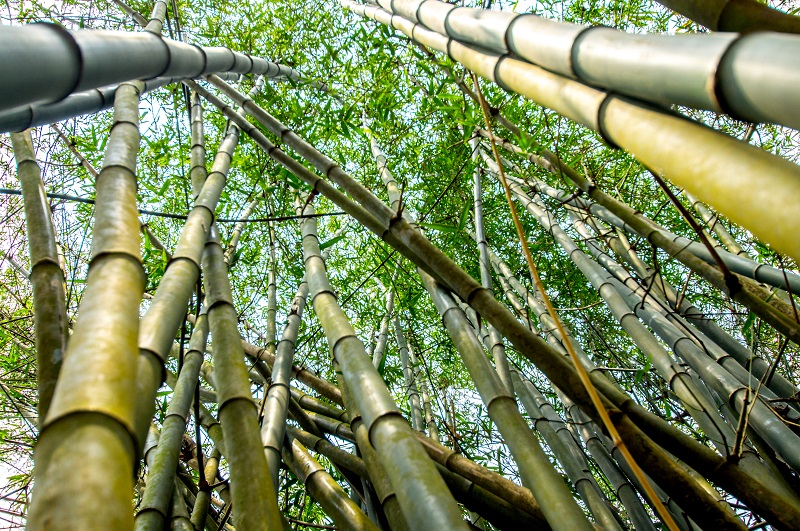 The Iron Triangle
Armed with a degree in Environmental Ecology from Vietnam and a doctorate in Environmental Science and Technology from France, My Hanh returned to her hometown of Phu An in the late 90s, only to be asked by the villagers why she didn’t use her extensive schooling to help her own village. Best known for being one of the areas (along with An Tay and An Dien) making up “The Iron Triangle,” a stronghold of the Viet Minh during the war, seeing the many varieties of bamboo that grew there sparked a vision in My Hanh—to transform the Iron Triangle into a Green Triangle. With the help of the Rhone Alps Region (France), Binh Duong Province, the Pilat Regional Nature Park (France), and the University Of Natural Sciences of Ho Chi Minh City, the Phu An Bamboo Village was born.

The picturesque complex is divided into two main areas. The botanical garden houses clusters of bamboo collected from all over Vietnam, Cambodia and Laos with a view to conservation. To date, 450 taxa have been collected, including 20 threatened or endangered species. My Hanh says her passion for bamboo will have her jump on any transportation available to get samples that the village doesn’t yet have, recalling a particularly arduous trek to Lang Son in Vietnam’s far north, bordering China.

“It was deep into the jungle and the path was dangerous. The locals couldn’t speak Vietnamese clearly, so they didn’t understand exactly what we were looking for. We just had to trust them. But in the end, we got what we came for.”

Back at the village, the bamboo are grown in separate clusters to avoid crossspecies contamination, and are used for research in the adjacent museum/ laboratory complex. Over the years, My Hanh’s research has led to eye-opening results including finding species that flower regularly but still live (debunking the myth that bamboo dies once it flowers) and that growing bamboo enriches the soil even more so than rubber, yams and cashews.

My Hanh points to bamboo’s role in improving the soil conditions after the devastating eruption of Mount Pinatubo and re-greening post-atomic Hiroshima, leading to research into phytoremediation, or how certain species of bamboo can be useful for soil decontamination and sewage treatment.

However, far from being an impersonal research facility, the Bamboo Village reaches out to the local community in meaningful ways. On any given day, groups of students on field trips can be found learning about bamboo and its many uses. The center encourages children not to burn bamboo leaves, but to leave them on the ground and let them naturally compost, providing nutrients for the soil and for insects and worms, as well as to prevent soil erosion. Information on proper techniques for cutting, transplanting and fertilizing are shared with farmers who previously often cut bamboo too early, before they matured, leading to reduced profitability and sustainability. 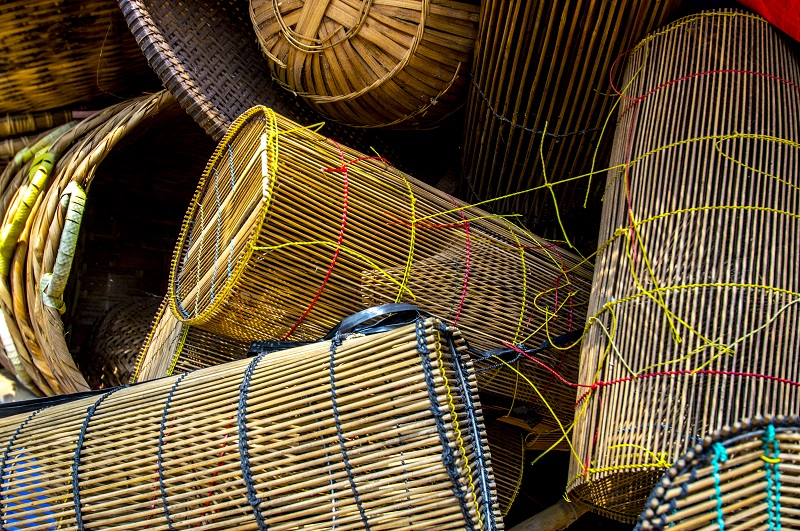 My Hanh and her team painstakingly identify each sample, at times requiring DNA analyses back in France, and study their individual characteristics. The results are shared with farmers to help them select the  right kind of bamboo for their use, whether it be construction material, handicrafts, paper pulp or eventoothpicks. My Hanh is encouraging the use of bamboo for canal construction in the Mekong Delta, as the  hardy trees are able to grow even in flooded soil.

In addition to encouraging bamboo farming, training for local villagers on making bamboo products and crafts has contributed, in part, to an 80 percent reduction in poverty in the village since the initiative began. Awarded the UNDP Equator Prize in 2010 for being a model in sustainability, innovation and community empowerment, it’s estimated that the Bamboo Village has positively affected the lives of up to 3,000 families.

That positive impact has helped fuel My Hanh in some of her darkest moments when she felt like giving up. In 2012, typhoon Pakhar damaged 40 percent of the village’s bamboo trees.

“I was truly in the depths of hell. Everyone saw the destruction and left. It was just me and my dog who stayed. I called everywhere for help. The local authorities were busy helping other homes in Phu An that had been damaged. But then I saw something. The bamboos were bent every which way and the typhoon had stripped them down to their roots, but they were alive. Even among the broken branches, I saw new green shoots. They still wanted to live, so why should I be discouraged? I learned a lesson that day from the bamboo. I had to help them stand up again.”

Help eventually did come from all corners of the globe and all together, it took My Hanh and her team of student volunteers seven weeks to salvage what they could, one grove of twisted trees bent 90 degrees over now a reminder of that event.

Sadly, though, the very existence of the village remains under threat. Every year, the village receives VND200 million in funding from the National University of Ho Chi Minh City, but needs to raise another VND500 million to meet its operating budget. This year, it’ll need even more, as construction has begun on the Green House that will encompass a laboratory, classroom, library, canteen and a place for the workers to sleep, replacing a dilapidated 15-year-old structure.

It is hoped that My Hanh’s win-win conservation and livelihoods model can be replicated elsewhere. There’s talk about building other bamboo villages as well as a village in the Mekong Delta attempting something similar, but with coconuts. She also advocates using fastgrowing bamboo instead of other types of wood, lessening deforestation, which in turn slows down climate change. Even growing bamboo in amongst other tree species can rehabilitate degraded land. 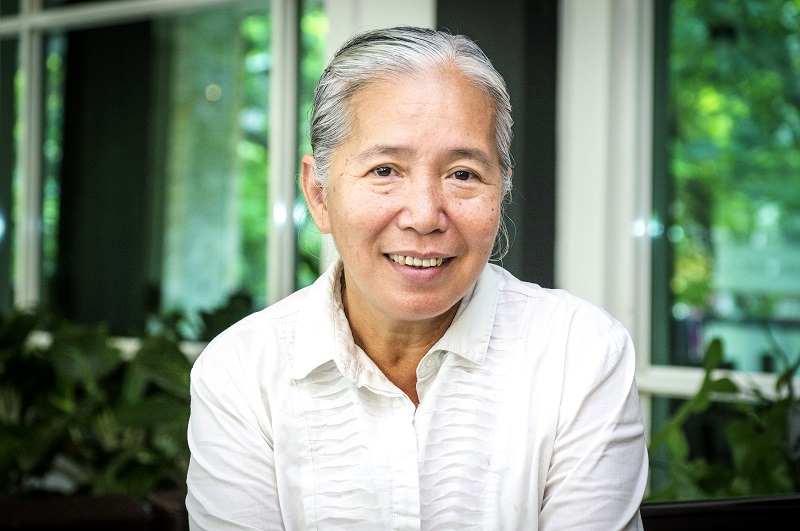 Looking forward, 63-year-old My Hanh has bigger dreams for her bamboo. “I want there to be many more bamboo villages. If something happens to one, there’ll still be others left. I also want families, even in the city, to grow a clump of bamboo. I have a species, bambusa multiplex, that can grow in a pot. If even half of the city’s 8 million people did that, we’d have 4 million bamboo trees releasing oxygen, helping to filter the pollution. It just takes a few helping hands. I also want this bamboo village to survive. We’ve had so many successes; we received a UNDP prize, I’ve registered it with the New York Botanical Garden’s Virtual Herbarium… but I won’t live forever. When I’m old and sickly, I want others to carry on my work. Please help protect the Phu An Bamboo Village.”