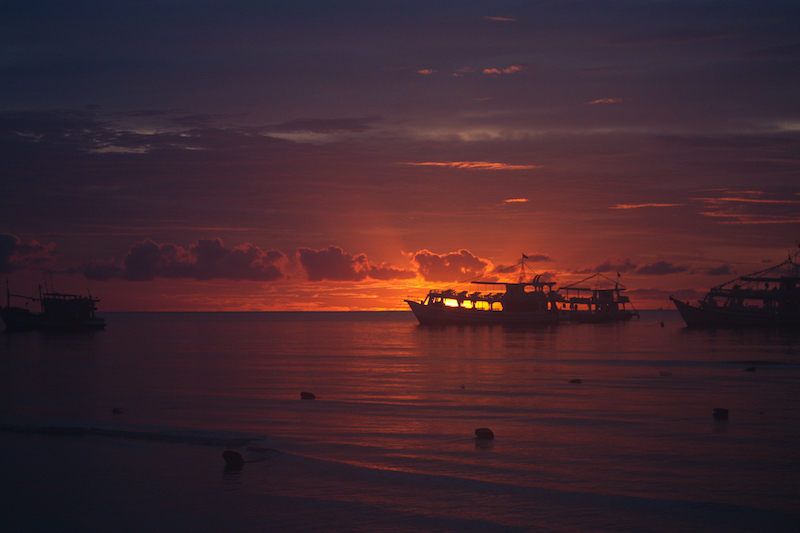 Idyllic adventures of a castaway on Phu Quoc’s north shore

I am what is known as a late adopter. (Fine. It’s not strictly one of the technology cycles but much preferable to being called a “laggard.“) I didn’t climb aboard the iPhone bandwagon as much as I was chloroformed-into-a-moving-van onto it by a friend who had an aftercontract 3GS ripe for the taking. By the time it got to me, no one was even selling cases for that model anymore. (The upside was I finally found one in a dusty discount bin somewhere for 99 cents. Score!) I’ve upgraded once in the past three years, again, thanks to being a sad, sad technology-havenot charity case. I don’t mind that I’m perpetually two generations behind everyone else or that local Vietnamese are more than happy to part with a month’s salary to obtain the latest offering, casting pitying glances at my iPhone4, the kind usually reserved for homeless people, an uncomfortable mix of pursed lips, sad eyes and a subtle, slow shake of the head.

My utter innovation adoption failure extends to other things, though, not just technology. I saw the Chatroulette version of Wrecking Ball before I had actually heard the song. (And I may or may not have had to Google what Chatroulette was…)

Recently, I pretended to laugh along when a lawyer colleague made a joke with the punchline, “Better call Saul!” Alas, television’s highest rated show of all time had ended, me blissfully unaware. (Although this oversight was rectified with some serious binge-watching.)

So when my blogging nemeses, the awesome Steph and Tony of 20 Years Hence, suggested that I join Instagram, I balked. “It’ll be fun,” they said. “You’ll like it more than any other form of social media,” they said. “All you have to do is press “like” on the pretty pictures,” they said. This coming from bloggers equally disdainful of social media as I was. I’m already on Facebook. I barely understand Twitter. Do I really need another avenue to express myself?

So, armed with my new Instagram account, I promptly took a trip to the Vietnamese island of Phu Quoc, posting photos willy nilly. Just miles off of Cambodia’s coast, most of Phu Quoc’s hotels are centered around the town of Duong Dong, towards the middle of the 31 x 16 mile island, with the pearl farms and fish sauce factories to the south, and the national forest and sleepy fishing villages to the north.

After visiting gorgeous Bai Sao (Star Beach) and doing a tour around the island’s south side, I headed up to the north shore for a few days. There are three roads to get to Ganh Dau, the northwesternmost point of the island, and also point closest to the Cambodian mainland just 8 miles away. One dirt road hugs the coast, just meters from the beach. A two-lane cement road paralleling the coastline was finished, cutting the travel time practically in half, to about 30 minutes. Very strangely, it’s not well marked as you make the turnoff from town and bizarrely starts with a runway from Phu Quoc’s old airport.

Alas, bad directions from the receptionist at the resort (last resort?) where my friends were staying led me to take the road that cuts up the middle of the island, through Phu Quoc’s national forest. Dusty but scenic, with no road signs to speak of, I’m glad I got a chance to see the island’s interior, but thankful that it was during daylight hours as pot holes and sand traps needed dodging.

About 400 meters up the road, there’s a sad Vietnamese-run place called Gio Bien. I checked out the bungalows and while they weren’t terrible, they weren’t particularly inviting. This is a popular lunch spot who want to visit the north coast without committing to staying so far away from the action.

Along the walk over, there are a few ramshackle homes housing fishermen and their families. Looking out over the water, past the netted enclosures where locals raise sea mollusks, you can see the nearby Cambodian islands, but really, the reason to come all the way out to this part of the island is to get away from it all.

I took a drive through the sleepy fishing village of Ganh Dau, where an ominous-looking waterspout was the most excitement the town had seen in a while. Not to worry. I took shelter in a photogenic pagoda and waited for blue skies to return. The weather soon cleared and I made my way past the picturesque fishing village. I found little cottage industries centered around the products of the sea, tiny fish drying in the sun. The little home factory processes 2-3 tons of fish daily that when dried are ready to be used as soup stock or fried up as a tasty snack.

Every now and then, some small cuttlefish are found amongst the fish, which the owner steamed up and offered me to snack on while I was exploring his little home factory. His daughter seemed to like them, too. 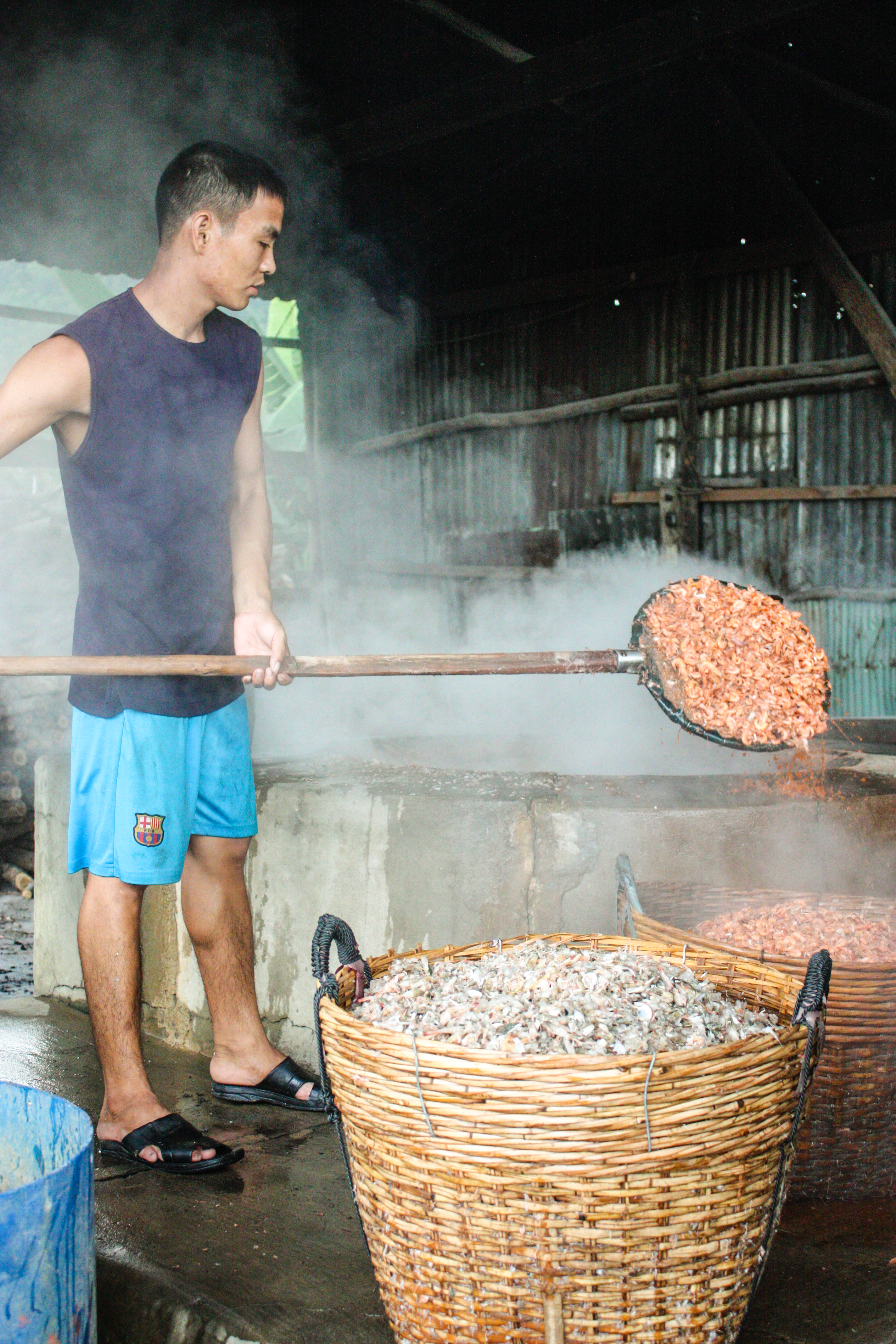 Further down the road, I came across a dried shrimp factory where shrimp are boiled with a bit of salt and coloring, then laid out to dry. Afterwards, they go through a drying machine. And finally, neighborhood women are used to pick out shells and bits before the shrimp are packaged and sold all over Vietnam.

Most of the coastline is rugged and undeveloped. About 10 minutes away, where the new paved road starts, lies Sunset Beach and a lovely restaurant by the sea serving up two of my all time favorites, plucked live from tanks: tamarind crab and sweet and sour soup with shrimp.

The northern part of the island also has a few dog training and breeding facilities. The Phu Quoc Ridgeback, characterized by a telltale ridge of hair that runs in the opposite direction along its spine, is just one of three ridgeback species (the other two are from South Africa and Thailand), and are found everywhere on the island.

I took a quick tour around one of the family-run places that breed and train these friendly, teachable dogs. When I asked the locals about these places, they all gushed about how the dogs can climb fences “like people.” Seeing it in person, I couldn’t decide whether it was fascinating or terrifying. I played out a scene in my mind where I was being chased by vicious dogs, managed to haul my hefty, nonathletic body over a fence and collapse in a heap of sweaty relief, only to watch in horror as they started scaling said fence Commando-style. Yes, my mind is a very dark place. Fun. But dark.

In addition to fish sauce, the island is also known for its pepper. Plantations line the roads, and people were very friendly when I asked to stop and just wander around. There’s just one harvest per year, with each bush yielding 3-4 kgs of pepper in a bumper season.

The island also produces small quantities of sim wine, a very sweet dessert wine made from the pretty Rose Myrtle. While I didn’t care for the wine, we did buy a bottle of sim concentrate (which tastes somewhere between grape and mulberry) to throw in with rum and seltzer.

Just south of Ganh Dau, there’s a long stretch of beach that’s now home to a massive VinPearl Complex. I remember going there in 2008, when there were no restaurants, no canteens, no nothing. Just a wild, deserted place to throw down your towel in the sand and go for a swim.

Text and Images by James Pham