On creating an artists’ community in Hoi An

The fate of Hoi An’s craftsmen and artists has long waxed and waned with the prosperity of the town itself. Starting in the 15th century, artists from all over the country moved to the bustling port town, hoping to tap into the international market created by traveling merchants from China, Japan, Portugal, the Netherlands and beyond. However, when the port silted up centuries later and business moved up the coast to Danang, many of the craftspeople and artisans likewise dispersed.

However, since being named a UNESCO World Heritage Site in 1999, this ancient port town has experienced a revival, and with it a burgeoning arts scene that is unique as Hoi An itself. 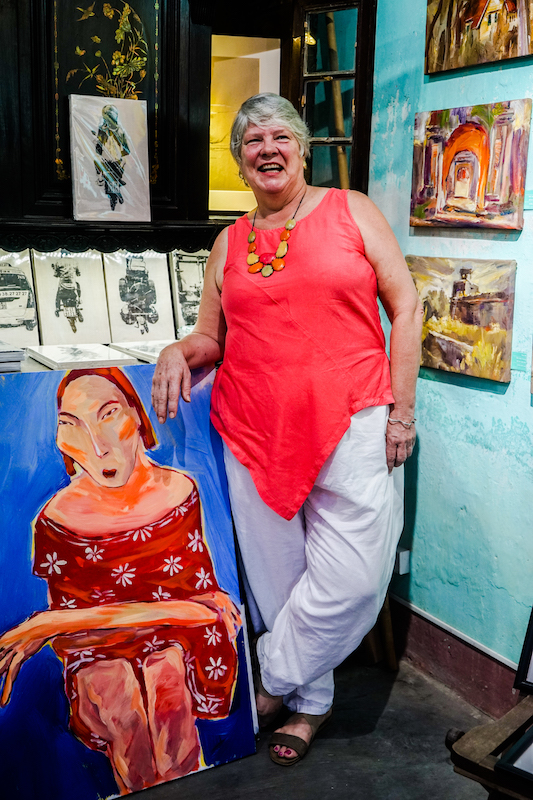 “We’ve got a little neighborhood of artists. There’s clean air here, and a gentler way of life,” says British artist Bridget March who recently moved to Hoi An from Saigon to open up her own gallery. “It’s jolly difficult to be creative in Saigon because just as you find somewhere quiet, someone builds an 18-story block next to you.”

“Here, I have more time. There’s not much distraction. There’s also the ocean not far,” adds Hoi An-based portrait photographer Réhahn. “Personally, I feel peaceful here and every artist needs to be good in his mind before starting to work.”

In addition to the inspiration that Hoi An itself provides through its historic timber framed homes awash in a pale colonial-yellow palette, lush rice paddies just minutes from the Ancient Town, and the serenity of being surrounded by rivers and the ocean, Hoi An also brings in massive crowds, on track to host a record-setting 6 million visitors in 2018.

Those numbers are both a scourge and a blessing for the Hoi An creative community. “Even at 7 am, there are tourists in your frame,” sighs Réhahn whose early work in particular featured iconic Hoi An street scenes. “You have to wake up real early to catch traditional moments.”

That said, those same tourists, conveniently already in shopping mode once they hit Hoi An’s Ancient Town lined with boutiques and tailor shops, can help local artists ‘feed the body before feeding the soul’. 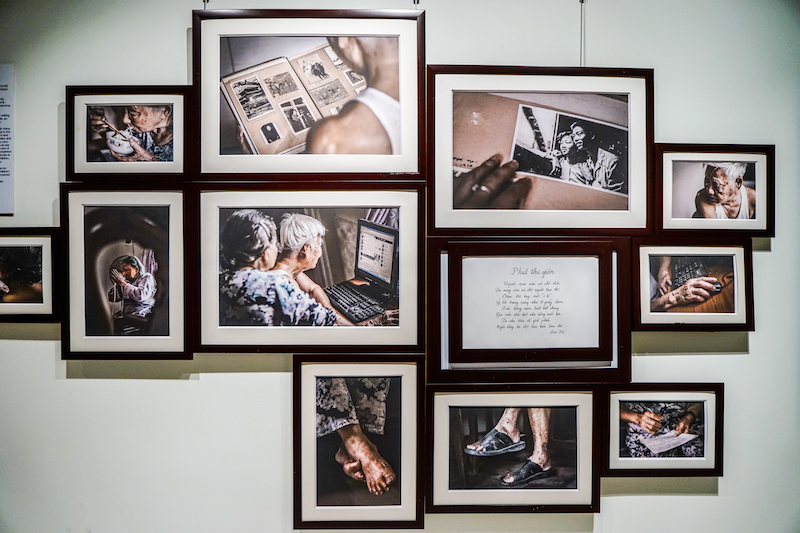 “Hoi An is an easy place to sell because people have more time,” says Réhahn. “It’s not rare to see people spend 5-6 nights here, enough time to see something they like, think about it, and come back a few days later. In Ho Chi Minh City, it’s big, places are hard to find, and people leave for the Mekong Delta after just a few days.”

Tourist dollars and an inspiring location have led to an arts and crafts scene that spans the gamut, from cheap, imported fakes to mass produced copies of paintings to artists creating original works.

“Most Hoi An artists are so busy trying to make a buck that they’re painting things they think tourists will want to buy,” notes Bridget. “The UNESCO status has created a lot of wealth, but the people here still remember what it was like to be poor when Hoi An was just a very poor market town and fishing port, so many say ‘just take the money while it can be had.’”.

The result is a glut of cheap, Chinese- made knockoffs and soulless “art” produced for the masses, making it hard to distinguish the real from the fake.

“There is a strong feeling among visitors that the town is full of junk,” explains Bridget. “And when they go into the painting shops, they have no idea whether what they’re looking at was painted at a factory by guys working throughout the night or not.”

Adding to the confusion are the tour guides who lead their charges to wherever the commission is highest rather than to where truly good art resides.

“The attitude of people in Hoi An is changing,” says Vietnamese-American writer and artist Nguyen Qui Duc as he oversees workers turning an overgrown backyard into a performance space. “There are so many scammers now. The tour guides want 40% commission; people can’t survive that.” 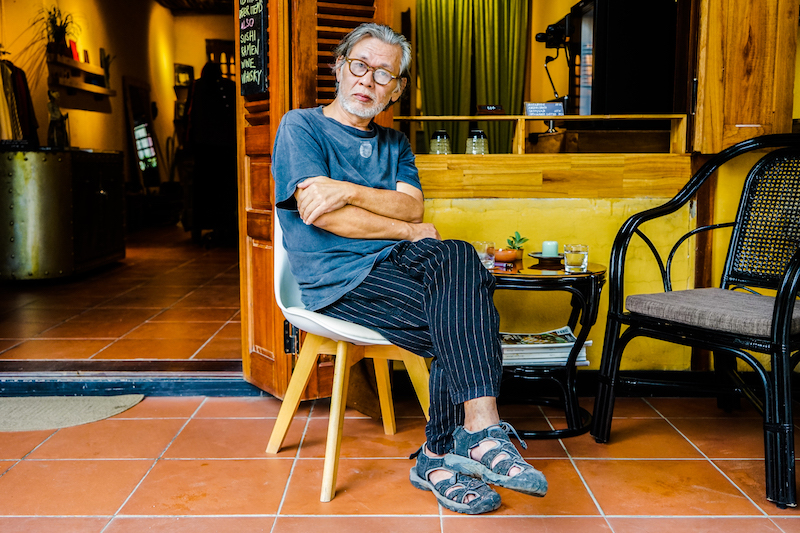 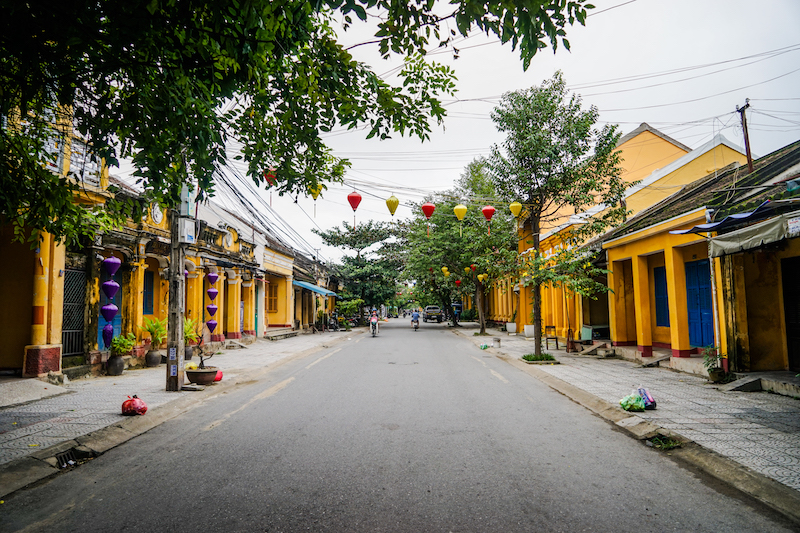 “There are already five galleries on this street, in addition to a lacquer artist, photographers, painters, and designers,” says Réhahn who’s spearheading the initiative to have the wide, tree-lined street officially designated a Rue des Arts. “It’s a logical thing to expand this area, just after the market, where people can keep going. There could be terraces to create an atmosphere like in Paris or Venice. I’ve met with UNESCO, the French Consulate, and local government, and they have all agreed to make this street an art-oriented walking street. We’ve also secured promises of donations. Things are happening. This street will grow up in the next 2-3 years. Right now we need more artists, more galleries.”

“It’s an aspiration that people can come to Hoi An and get something that represents the best of Vietnam and inch out bit by bit t-shirts, coconut bowls, and all this tat that’s sold in town. There are lots of wonderful craftsmen in town but it’s hard to find them in all the clutter,” adds Bridget. 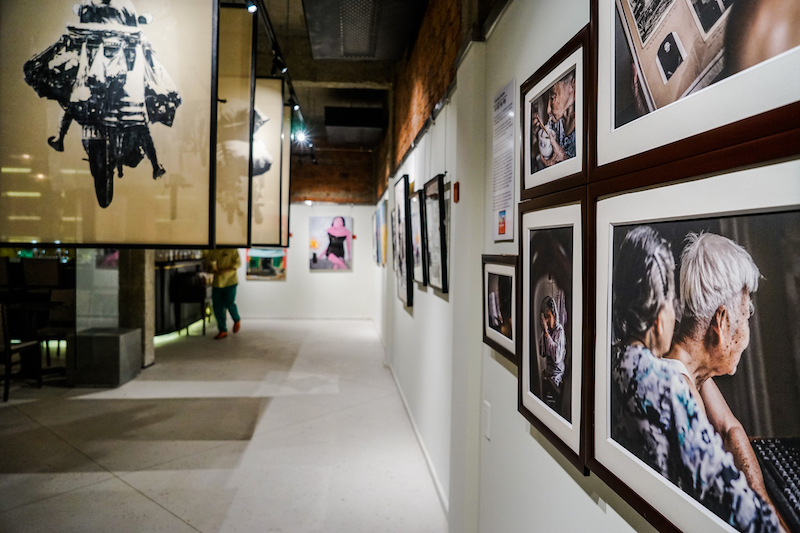 The movement has found support from the Anantara Hoi An Resort on the eastern end of Phan Boi Chau. “Why don’t we create a space where we can anchor art and give it some credibility?” says General Manager Pieter Van Der Hoeven of the impetus behind Art Space. Inspired by a Viennese art museum, the interior is all exposed brick work, raw cement and stripped back columns. Vintage lighting casts a warm glow on an eclectic collection of art from all over Vietnam. Angry, abstract faces in the Fauvist style by colorist Do Nhu Tuan are interspersed with mesmerizing, contemporary wood sculptures from the H’re ethnic group while hanging oversized prints of iconic Saigon street scenes from Canadian artist Nathan Lane vie for space with a special exhibition of Hoi An-based photographer Ha My, providing an intimate look into the lives of her grandparents. 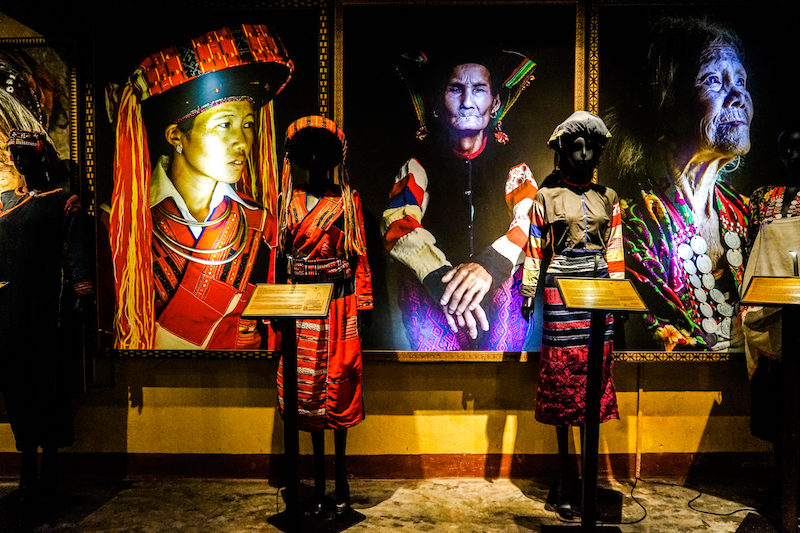 “We try to connect with the local art scene. We want to be connected to this street,” adds Pieter. “Anantara is about being indigenous to the destination. We’re going right into the community and want to be something more than superficial, more than a place that has art on the walls. We want to get movies, art classes, writing workshops and poetry reading in here, taking it to the next level.”

Opened in October, Art Space is aiming to be a place where artists, foodies, and art lovers can come to share ideas over original artwork and beautiful food. “I want people to come to us and say ‘I have an idea about art’ or to get involved in an art class,” says Pieter. “The concept is Old World. In the old days, people went and looked for sages. We want to be connected to the old, traditional way of travel.”

Even the food at Art Space takes on an artistic quality, as Vietnam’s only 3D food printer whirrs away in the corner, creating Mondrian-like geometrics to later be filled with watermelon and lemon curd and served with a Blue Lagoon cocktail. “For a chef, it’s something completely new. It makes plating different and gives us something to play with,” says Executive Chef Geert Jan Vaartjes. 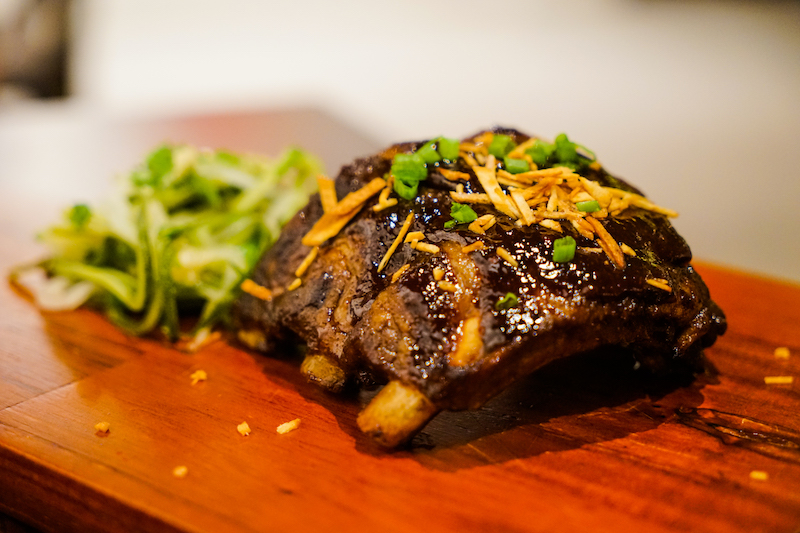 “I feel like I have no boundaries. It’s not crazy but we try lots of stuff like Grouper with foie gras and Arabica jus or Iberico Ribs sous-vide with Coca-cola to break the protein down.” The wood-fired oven on the outdoor terrace churns out light, crispy pizzas topped with innovative ingredients like Korean Gochujang or Vietnamese banh mi fillings. 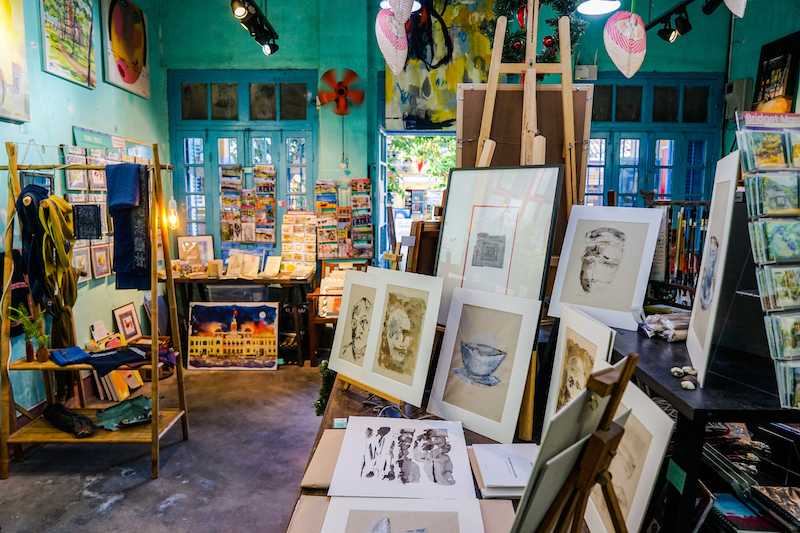 “This place is definitely unique,” says Bridget who’s also the curator of Art Space. “Lots of restaurants are always asking artists if they’d like to display their art. But nothing’s ever sold, as staff are paid to look after the guests, not the art. Here, it’s different. There’s someone from the March Gallery here in the mornings or customers can take the 5-minute walk down to the gallery. From the get-go, it was all about getting art on the walls with the lighting tracks and hanging rails. We think this is unique in Southeast Asia for a restaurant and a gallery to work together to create something mutually beneficial.”

While there are differing opinions on how it should be executed, most of the resident artists on Phan Boi Chau agree that the key to creating a new home for the Hoi An art community is striking a balance between commercial and artistic interests, creating something new while retaining the ancient soul of Hoi An.

“We have to have artists who can work with the local people,” says Duc, “someone to show them the alternative to selling cheap clothing or hanging up a poster of Che Guevara and putting out tables for beer by perhaps curating a show of a cousin who does ceramics. Big restaurants can keep the house, but not the spirit. Artists have the sensibility to keep things as they are but renew the spirit.” Art Space at Anantara Hoi An Resort (1 Pham Hong Thai Street, corner of Phan Boi Chau) is an art and dining concept venue where innovative food creations and original artwork combine to offer new experiences for foodies and art lovers alike. Most dishes on Chef Vaartjes’ tapas menu are priced at VND220,000. Or come and enjoy a cup of coffee for just VND35,000 every morning from 7- 11am. For more, contact +84 235 391 4555, or e-mail: [email protected]