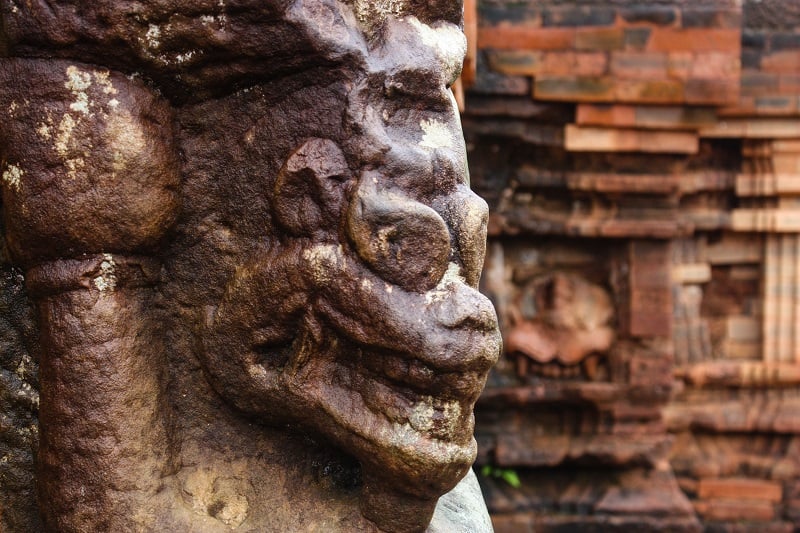 Known as intrepid seafarers, the Champa Kingdom developed international trade routes that allowed them to accumulate wealth and political power as well as forge ties with other regional kingdoms and with South Asia and China. Together with the Khmer and Dai Viet kingdoms, a maritime route starting from Thang Long, near the Red River in Vietnam’s north, spread further
northwards up to China, southwards through the Malacca Straits and the South Asian islands and westwards to India and then on to the Persian Gulf, Red Sea and Mediterranean.

For this reason, port-cities were crucial for the economy including the port of Great Champa (Hoi An), Vijaya (Qui Nhon), Kauthara (Nha Trang), Panduranga (Phan Rang) and Malithit (Phan Thiet). For history buffs looking to combine Champa culture with creature comforts, Vietnam’s scenic coastline offers up both in stunning fashion.

Hoi An, Tra Kieu and My Son

The center of the Champa Kingdom from the 2nd to 13th centuries CE, the Thu Bon River Basin (Quang Nam Province) included three main centers: Hoi An with its river-mouth port as the economic center; Tra Kieu, 20km to the southwest was its political hub and center of royal power; and My Son, the royal religious center, a further 30km inland. 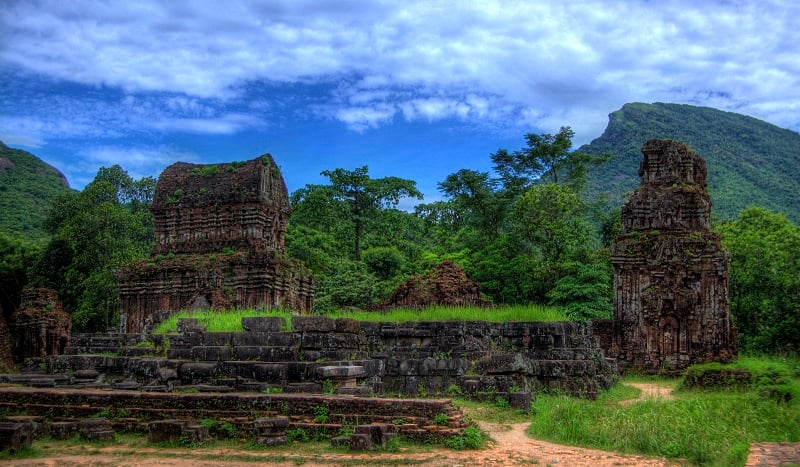 Rediscovered in 1885, the 2 km diameter semi-circular valley of My Son contained 72 religious monuments of brick and stone, most dedicated to the Hindu god Shiva. The oldest remains date back to the 7th century, although other evidence suggests that construction on the site began up to 300 years earlier. Monuments continued to be erected until the 13th century, providing a historical record illustrating up to six styles of ancient Champa art, with the golden age considered to be somewhere around the 10th century. While the Cham monuments themselves are quite uniform, featuring red bricks that were hand-rubbed resulting in very thin joints, the decorations remain magnificent.

Listed as a UNESCO World Cultural Heritage in 1999, a site visit should begin with the two world-class exhibition halls at its entrance, with excellent, userfriendly exhibits providing background
information on the sanctuary’s history as well as the evolution of Champa art, including examples of hair styles, sampots and sarongs and dances and musical instruments. A sleekly lit board shows the terrain of the site chosen for the sacred Hon Den (Mahaparvata) mountain to the south and the sacred Thu Bon (Ganga) River to the north, and the dense group of temples in which each building is given a letter / number designation.

While touring the site, look for the two main representations of Shiva found either in human kingly form or as the ubiquitous linga (a phallic symbol) mounted inside a square yoni, its female counterpart. Another theme to notice is the zoomorphological deities in the carvings, including the comically menacing lion-faced makara guardians and the elephant-headed Ganeshas combining the strength of an elephant and the intelligence of man.

The relatively small size of the complex makes for an easy half-day trip just an hour’s drive from Hoi An. All the temple groupings are connected by scenic, fairly level brick paths that wind their way through beautiful, thick forests.

My guide for the day has been traveling to the site for more than 20 years and it was fascinating to hear how the area has developed before and after its becoming a World Heritage Site. On the way back, we also made an unscheduled stop at the Museum of Sa Huynh—Champa Culture, a curiously large building with 2,000+ year old artifacts from the Sa Huynh culture, one that pre-dates even the Champa Kingdom and which occupied some of the same territory.

Housing approximately 400 works, the Da Nang Museum of Cham Sculpture is home to the finest collection of Cham sculpture anywhere in the world. Conveniently situated right on the cityside of Dragon Bridge over the Han River, the museum reportedly started off as an abandoned sculpture garden of sorts. It’s said that a French resident in Quang Nam deposited Cham sculptures he
acquired from his travels here and local residents added to it, ostensibly due to some kind of superstition against having Cham artifacts on their property. This impromptu sculpture garden then formed the core of the first museum’s collection, established in 1919 by Henri Parmentier. The building itself is quite beautiful with original floor tiles in place. Look for some of the subtle architectural elements, like the stylized lotus-like mouldings that are drawn from Cham art. 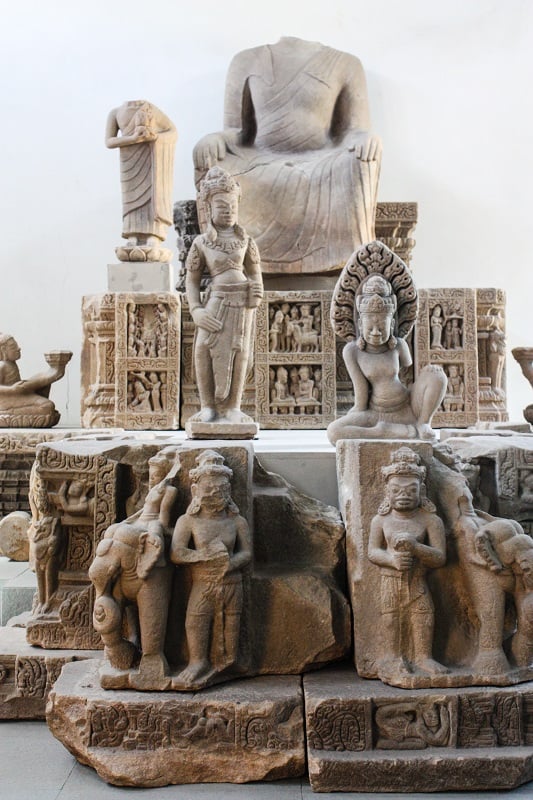 The museum is divided into a series of rooms named after the area where the works were found: My Son, Tra Kieu, Dong Duong, etc. Additionally, decorative design, the shape of hair curls, costumes, etc. help classify the various styles. The museum received a 2,000 sqm extension, much of it currently empty, but museum officials assured me they have much more in storage that will be rolled out in the next year as part of the celebrations around the museum’s 100th anniversary (commemorating the year that an agreement was signed to establish the museum, instead of when it was actually opened). There are also plans to address some unfortunate water damage and on-going construction in some of the galleries.

Nevertheless, each room is very well documented with additional placards to explain key pieces. Careful observers will find it fascinating to see the influences visible in the sculptures, for example
the horse-riding polo players (Quang Tri gallery), a Cham interpretation of a sport popular in India at the time or the seated bodhisattva, a wonderfully detailed deity found at Dong Duong, the largest known Buddhist monastery in Champa. The My Son gallery with its life-sized guardians and the Tra Kieu gallery with its massive pedestal featuring a cistern, lingam and bas relief friezes
as well as a gorgeously intact apsara dancer forever captured in graceful mid-dance are soaring highlights of all the collections.

The largest of all Cham festivals is Kate (pronounced “kah-tay”), held yearly in October just outside of Phan Rang (the dates are based on a lunar calendar, so change every year). While it’s often mis-called the Cham New Year, it’s primarily religious in significance, a time of year to return to the Cham towers to pay homage to the deified Champa kings of old. “We value kings that were not powerful and rich but powerful and useful, the ones that helped the people,” says Cham writer, Inrajaka. 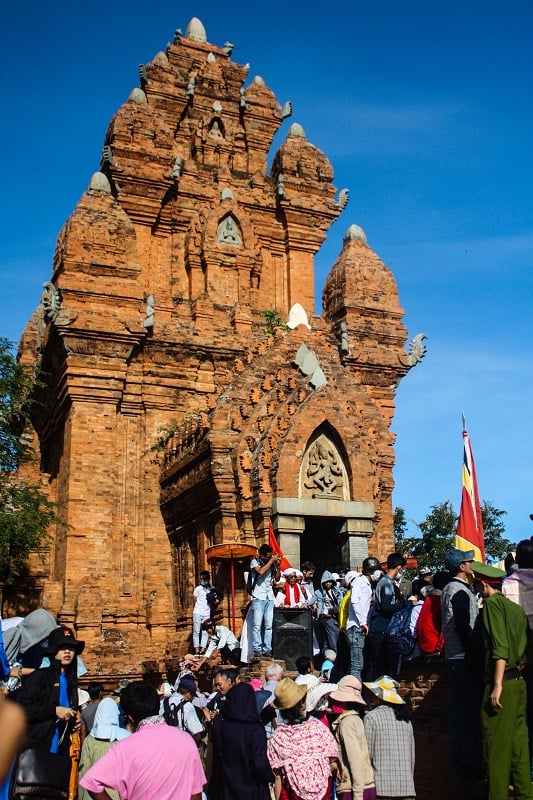 The first day of the ceremony includes an opening dance and musical performance in the blazing mid-day sun at the local soccer stadium in Huu Duc, just outside of Phan Rang. Thousands turn out for the procession that includes priests, drummers and villagers. At the stadium, crowds pack the bleachers and the perimeter of the field as young girls in colorful dress perform a fan dance
that lasts just under an hour, marking the opening of Kate. As Kate is a time when many return to their hometowns, it takes on a festive quality as families and friends get together for much drinking and storytelling. This year, a soccer game featuring local clubs and more dancing and music followed the official ceremony.

On the second day, the crowds make their way, laden down with offerings, to the well-preserved temple of Po Klaung Garai, three brick towers set on a hillside. Legend has it that this king won a battle against invading Khmer forces by suggesting a tower-building contest instead of fighting, with the temple bearing his name evidence of his peaceful victory. By 7:30am, dancers and musicians open the ceremony. If you want a good vantage point, you’ll have to arrive early as the tiny performance area fills up quickly. The priests then perform a ritual of bathing of the statue of the king and changing its raiment. Very few can enter the small space, with most families staking out a patch of ground on the surrounding hillside to lay out offerings of food which are later eaten on site or brought to a second nearby tower, Po Rome, or even down to the beach to share with family and friends.

While the Cham people are extremely hospitable, few outsiders attend Kate other than photographers and invited friends. Westerners are few and far between, although the ones that do attend are warmly welcomed. Even Vietnamese in nearby Phan Rang don’t usually go. If you do attend, wear plenty of sunscreen and bring a hat as there is not much shade where the events are held.