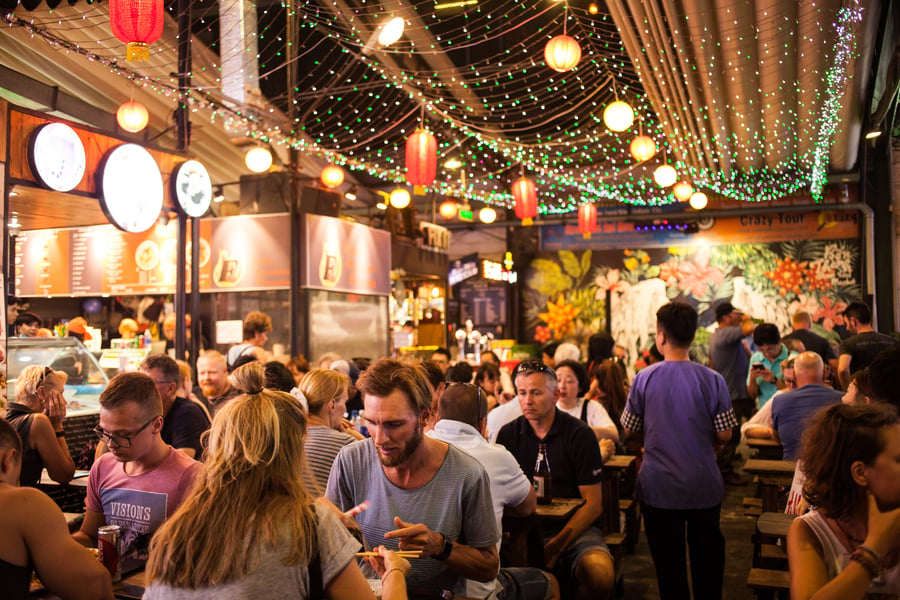 The Ben Thanh Street Food Market, one of the liveliest places for food & drinks in the city

Once you get to Thu Khoa Huan Street there’s no missing Ben Thanh Street Food Market. There’s a large sign above the entrance, glowing brightly, while below it is the bustle of motorbikes being parked. Behind a row of motorbikes are a number of wooden picnic tables with people eating and conversing, and beyond that, almost 40 foodstalls boasting a vast array of cuisines. It’s here, under a high canopy, where you’ll find something for everyone: pho, banh can, bun cha, mi quang and banh xeo. There are also Indian, Korean, Japanese stir-fry, Italian, Thai, American and much more. There’s even an oyster bar stand and C16 Station, which offers chili cheese dogs and French fries. There are also drink kiosks where you can have a cocktail, wine or enjoy a bottle or draft from one of Saigon’s local craft breweries. And for teetotalers, there are herbal juice and fresh fruit juice options. For those with a sweet tooth, there’s ice cream served as well. 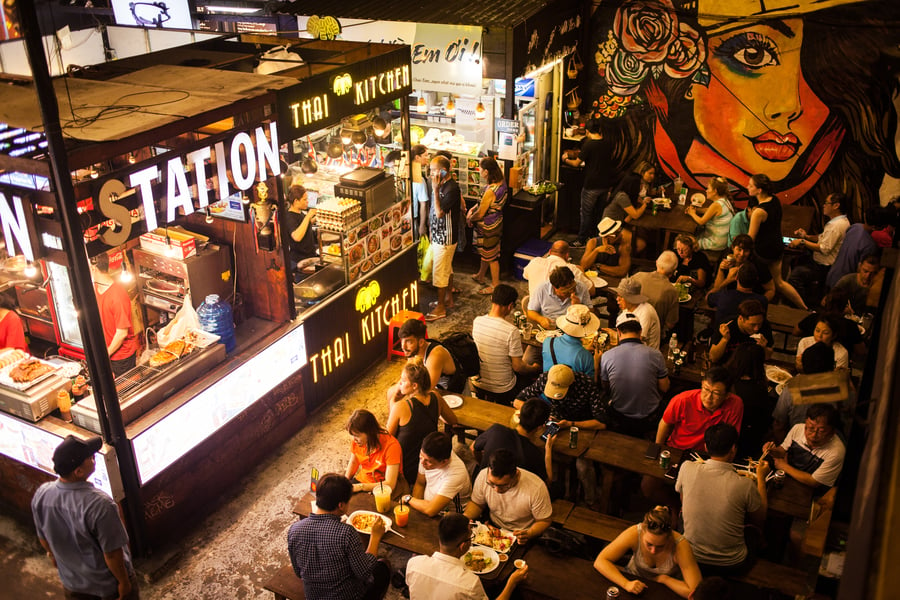 As I walked in the first thing I noticed was the buzz coming from the tables. There were tourists of different nationalities sitting side-by-side, strangers enjoying their food and conversing with one another. Sitting at separate tables we often choose not to interact with unfamiliar people, but sitting at the same tables elicits communication among people of divergent backgrounds. For a tourist it’s a great opportunity to speak with local Vietnamese, and for the Vietnamese, an opportunity to welcome them while practicing their English. There’s also seating in the back as well as in an upstairs area. All told, the three seating areas comprise enough seating for approximately 250 people. 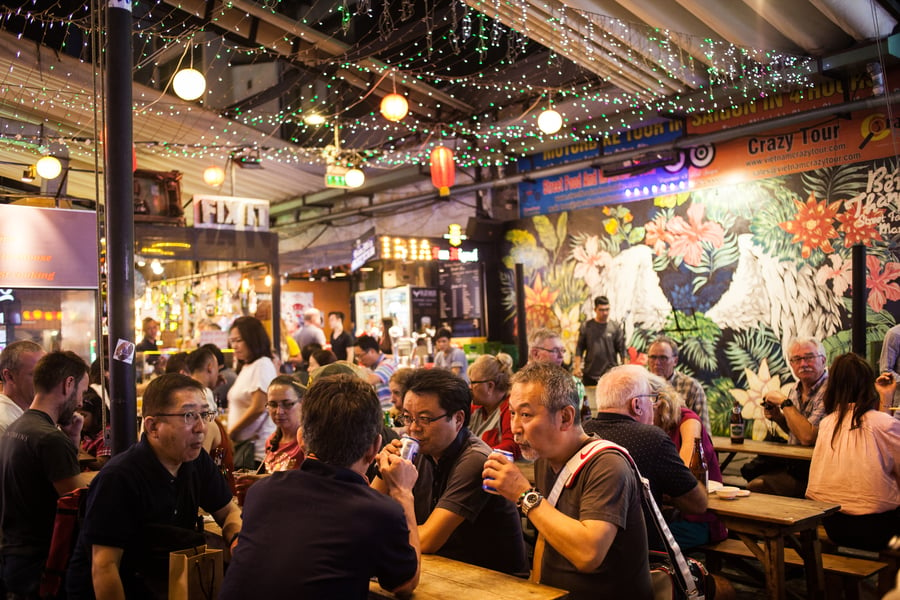 I started by meandering and browsing the rows. Once I had seen it all it was time to make some decisions. The first thing I tried was a roasted pork sandwich with a bun made of that same fluffy pastry of a banh bao. I also ordered corn fritters from the same stall, called Got Bun. The total for both was just under VND100,000. They gave me a number marker to take to my table. I found one in the back where there was more room and as I waited for them to prepare it I went to a stall near the front called Ibia and chose a bottle of East West IPA to go with it. For VND75,000 a bottle, this is a local IPA that rivals any you’d get from an American brewery.

The IPA was cold and filling, while the pork in the sandwich was succulent and tender. For a sandwich fan, this is a great choice and a definite try, a nice fusion between Western style sandwiches and banh bao. The corn fritters were fried to perfection, a darker brown around the edges for crispness with a golden brown in the middle for chewiness, and sprinkled with salt and cinnamon. Next time I’m in District 1 I’ll be heading back for another round of fritters and pork.

Soon the smell of chicken and pork ribs grilling wafting through the market called me. I ordered two plates, one from Station BBQ with barbequed pork ribs that came with grilled corn on the cob and coleslaw for VND150,000, and the other plate from Chicken BBQ, a grilled chicken leg and thigh with rice for VND100,000. The ribs were thick, the meat tender and the corn fresh, with a touch of grill marks. The grilled chicken was juicy, ample and the marinade subtle and savory. This chicken rivaled any that you’d get at one of the much higher priced BBQ restaurants in the city.

I took a break after all that meat, finishing my IPA and ordering another before I went for my final round, a stall at the front called F3. This is a Japanese stir-fry where you choose from a variety of noodle types or rice, and then you choose your vegetables, meat, sauce and more to create your own custom stir-fry. I chose a thin rice noodle with broccoli, carrots and onions, tossed with shrimp and a ginger teriyaki sauce. It was as delectable as it sounds, with layered flavors and reasonably priced at around VND100,000 depending on your options. 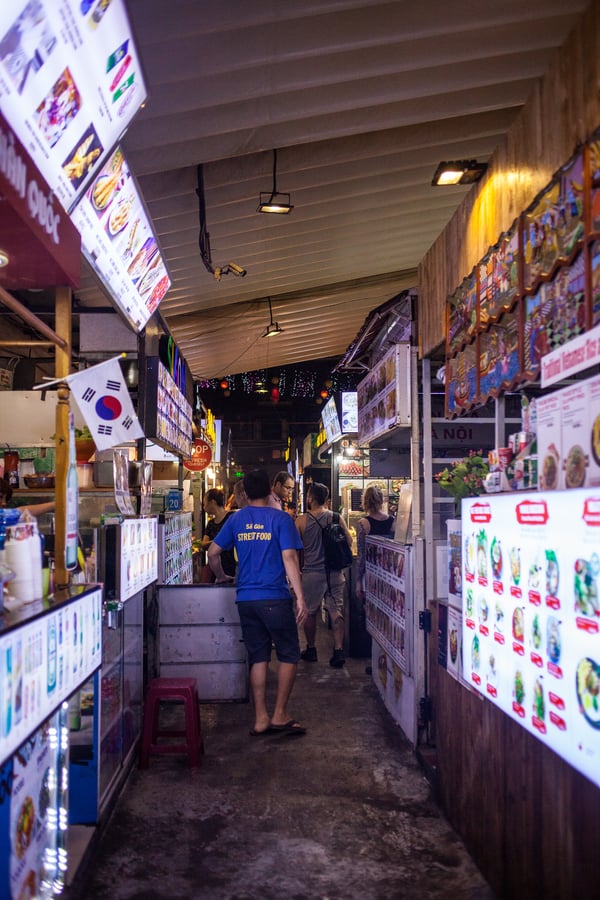 Ben Thanh Street Food Market is a wonderful experience with a lot of great food choices, which is why it’s listed in the top 15 of 205 things to do in Ho Chi Minh City on TripAdvisor. Every Tuesday and Saturday night from 7:30 to 9:30 there’s live music with a Vietnamese band playing Western covers.

Ben Thanh Street Food Market is located at 26-28-30 Thu Khoa Huan Street and is open daily from 9am to 12am. For more info, check them out on Instagram and Facebook: @BenThanhstreetfoodmarket