Straight to the Top of Saigon

Rising up into the near stratosphere a calm comes over you as you step out of the elevator to walk out among the clouds at the newly opened sky deck in Vietnam’s tallest building, the Landmark 81. As if rising up into the Kinh people’s heaven, in the lobby you will find a diorama outlining the story of Thanh Giong, one of the four immortals who ate rice as a boy to become a giant and then rode an iron horse to beat back invasions from northern marauders. Looking from the viewing deck south, a wall of black rain clouds form and before one’s eyes plays out an almost apocalyptic scene straight from sci-fi movie Bladerunner 2047. The clouds tumble straight towards us, yet because of the long distance the scene plays out inexplicably slow. To the west, a Vietnam airlines plane makes its descent to safely land at Tan Son Nhat airport just before a flash of lightning streaks across the sky illuminating the gray for an instance, the thunder reaching everyone’s ears a few seconds later. The air is electrified and I walk over to the other side of the building where the weather is still strangely clear and crisp. The view to the east sees a medium sized container ship come to meet its friend the pilot ship, which then guides it to berth at Cat Lai port to offload its precious cargo. 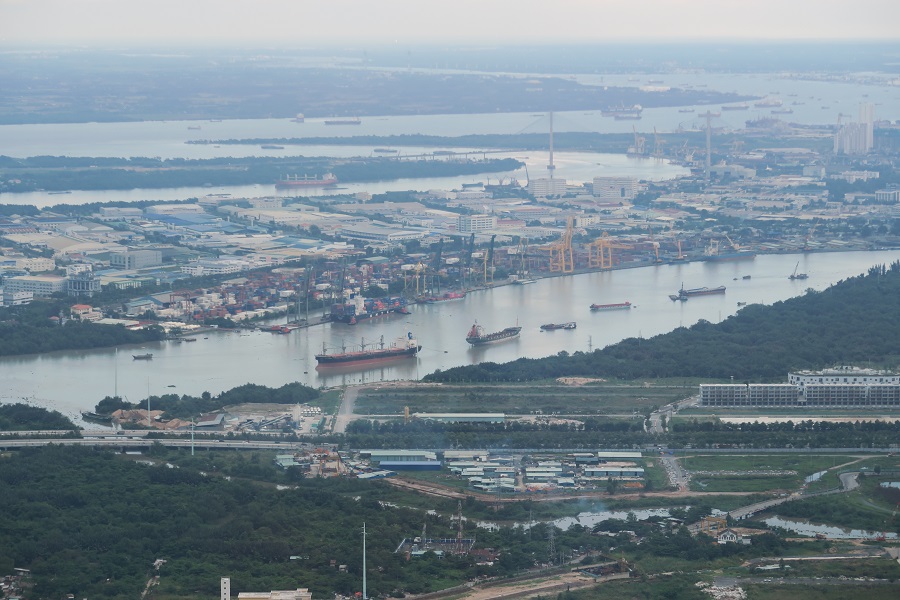 Out on the balcony I sit to admire the view in the positively charged cool breeze that billows around the tower. A waitress dressed in a kimono approaches me calmly and after, a polite exchange, I order a sake-based cocktail. After ten minutes an attendant approaches, asking me to move inside due to rain and the possibility of lightning striking. I move to the inside bar and they close and lock the doors to the outside. Walking around the sky deck, there are teenagers on the side playing virtual reality challenges, oblivious to the forces of nature raging in front of them behind the thick double glazed glass. The lights from the machines reflect off the glass and almost look like the world outside is under attack by neon green and red lasers. 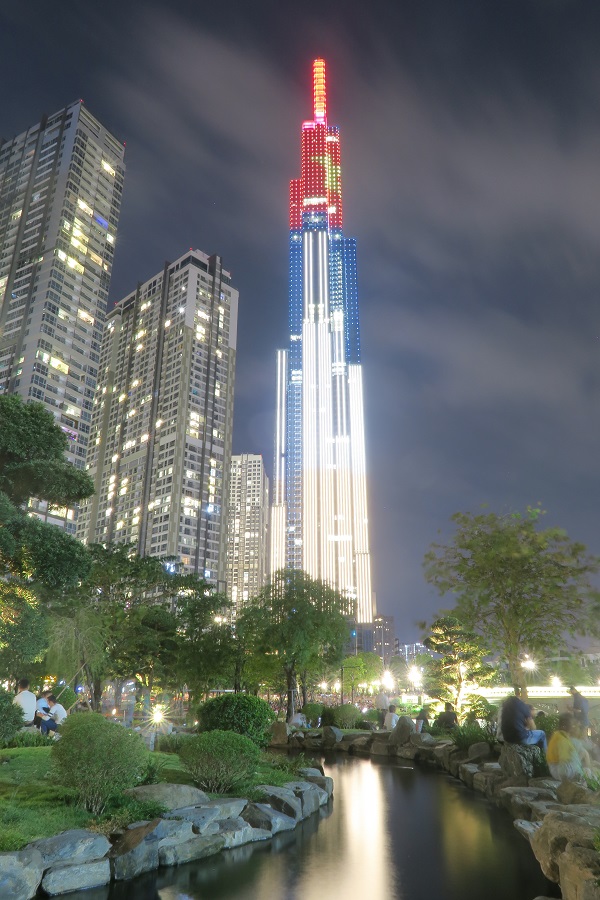 After the rain has moved onwards towards District 2 and District 9, I make my way out to the outside upper deck where I put on a harness and lock myself into the walkway with a carabiner. I traverse around the rail and get a picture from over the railing at the land below. After two hours I make my way to the elevator to descent. I enquire with the guard how long is the ride down and he replies, “53 seconds”. Stepping inside, my ears pop as we make a measured descent back to the mall below. A surreal experience, I decide to end the afternoon by making my way to the Peach Garden, a dim sum Restaurant located on the fourth floor. It fits into my trip that day to the upper heavens of Saigon. The Peach Garden being the mythical place where the Monkey King caused havoc by devouring the peaches of immortality in the classic novel Journey to the West—a favorite story among children in Vietnam and throughout Asia. 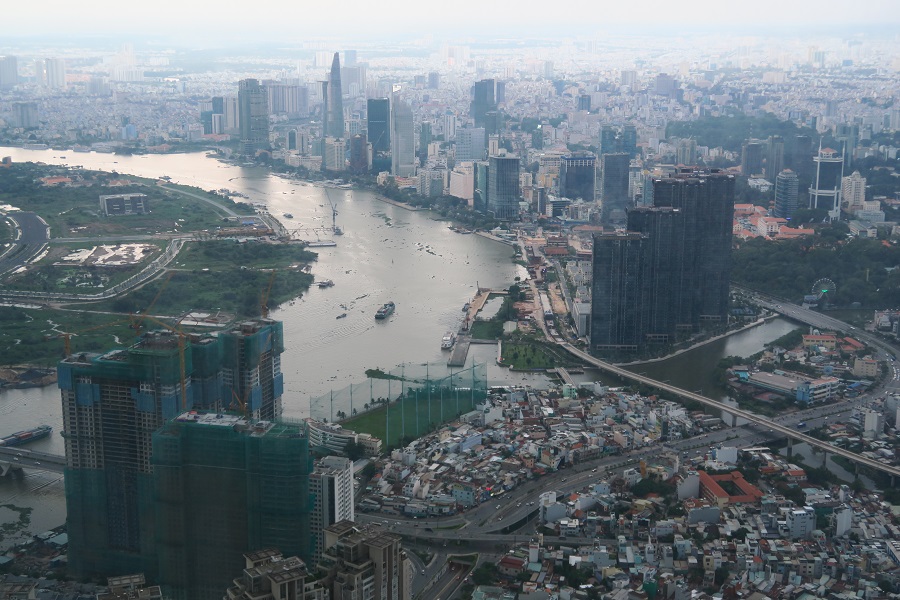 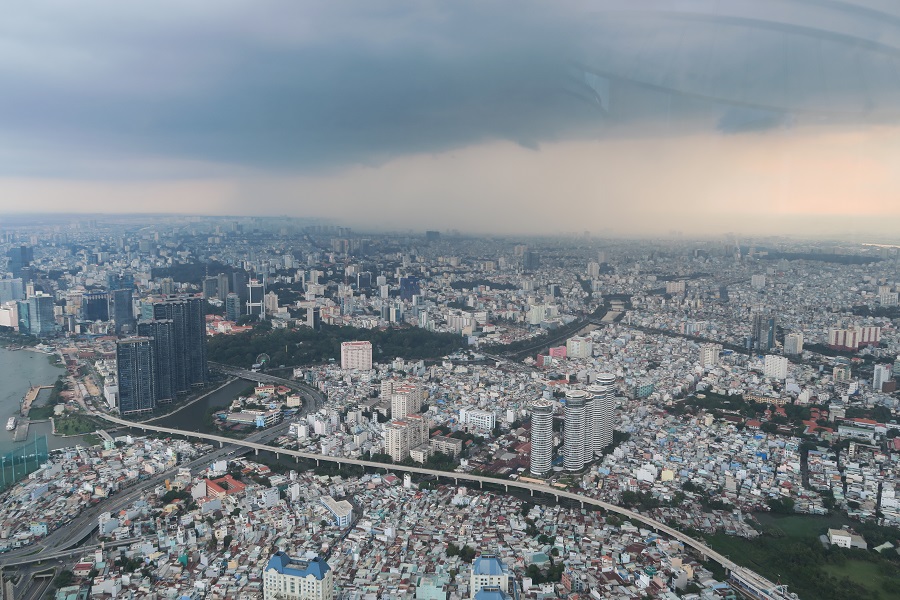 Currently, Landmark 81 offers a happy hour discount between noon and 3:30pm and the ticket is discounted to VND500,000 for adults and VND300,000 for students. Take your kids during the summer holidays. If you are lucky enough you’ll see the power of nature during the rainy season. Not for the faint-hearted, expect delays should there be lightning and during this time elevators will not be operational. There is also an ice skating rink in the basement of the Landmark 81 mall. Vinhomes Central park public area is also a great place to take kids to enjoy the outdoors, go for a walk, play frisbee or use the playground facilities. The park located next to the Saigon Bridge is 13 hectares and the largest urban green space in downtown Saigon. 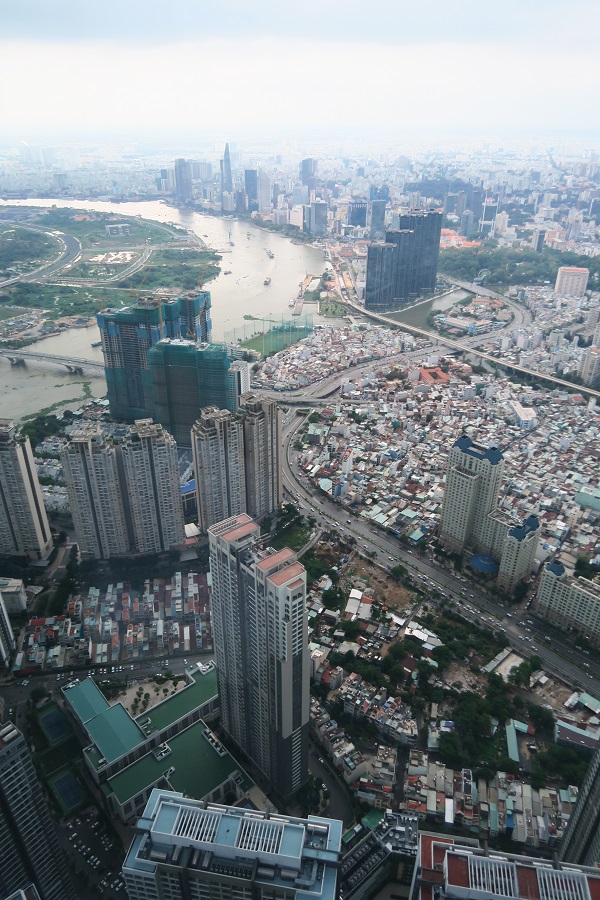