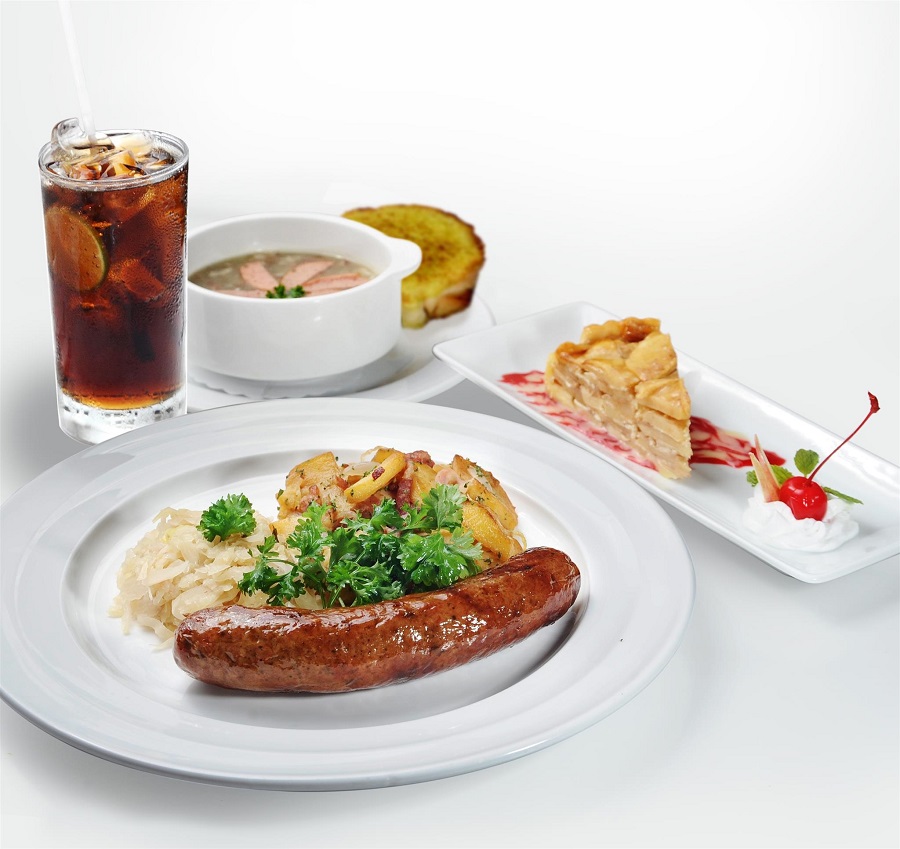 Walking in for a Sunday lunch there’s a lot of contrast between the afternoon sunlight outside and the much dimmer ambient lighting indoors at Gartenstadt Restaurant (34-36 Dong Khoi, D1). The door opens to the bar and beyond it is a cavernous dining area broken into sections by a wall. I headed past the bar to a seating section behind it where there are comfy booths or benches with soft seats and fuzzy fabric backs. In addition to the seating at the bar there’s a balcony on the second floor big enough to accommodate up to 20 people. The indoor dining areas, including both upstairs and down can seat more than 150 patrons. On any given day Gartenstadt’s clientele is typically around 70% locals with the other 30% comprising a mix of international diners. 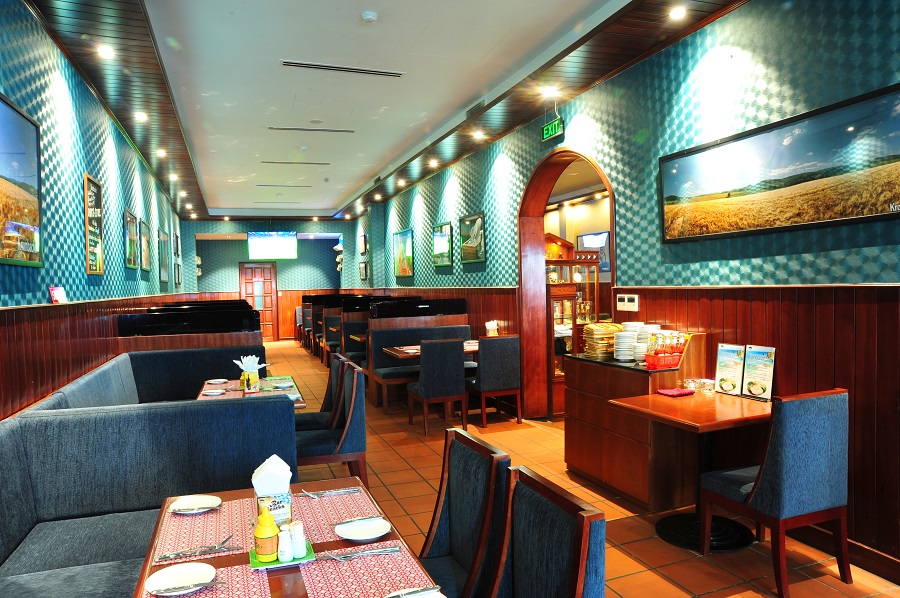 After being seated the server brought food and drink menus to the table, then giving me time to look them over. I started with a bottle of Krombacher Dark (VND98,000). This German Schwarzbier style beer has a delightful mix of malt and molasses flavors but is much less filling than a typical stout. Gartenstadt imports a few Krombacher varieties as well as Schneider Weisse. They also have standard regional beers like Tiger or 333. Other than beer there’s a large drink menu with fresh juices and specialty Italian coffees, a nice selection of cocktails and spirits, a number of different flavored Schnapps and an entire page of whisky varieties. Additionally, they have a selection of red and white wines from all over the world.

While the German fried dumplings (VND130,000) or the shrimp cocktail (VND160,000) were alluring appetizers, I went with the radish & Serrano ham plate (VND220,000). What a great presentation they made of it with a small tomato carved into a flower petal centering the plate and sprigs of parsley dashed about. The radish was crisp and fresh with a little natural spiciness, while the ham was soft, buttery and subtly salty. The saltiness of the ham was superbly complemented by the tart piquancy of the radish.

Before moving on to other parts of the menu I tried one more appetizer, a quintessential German delight, potato cakes with apple sauce (VND130,000). The server brought a plate with four piping hot potato cakes with light brown centers and golden brown edges. The apple sauce was more like candied apple compote in a jelly. The potato cakes were delectably sapid, with a crispy exterior and soft interior while the apple sauce, sweet and syrupy, was an exemplary contrast. This is a must for the potato connoisseur out there.

The Gartenstadt menu has a lot of interesting options for soup or salad, such as the herring salad (VND210,000) or the traditional goulash (VND160,000), however I chose the lentil soup with bacon and sausage (VND80,000). A hot and savory soup that leaves a nice touch of pepperiness in the throat, this hearty dish is served with toasted garlic bread. The brown lentils are slow cooked to tenderness, mixed with thin slices of sausage, chewy bacon pieces and small nibbles of boiled potato. I left the bowl completely empty.

When it comes to mains there are schnitzels, steaks, seafood, veal, rabbit, ribs and more, but I had my eye on the sausage. All of the sausage ingredients at Gartenstadt are imported from Germany and then made in-house. For different flavors there is smoked, spicy, curried and more. For different meats, beyond the traditional beef and pork there is lamb, chicken or ostrich to try. In the end I decided on an old favorite, smoked sausage with home fried potatoes and sauerkraut (VND230,000). The sausage was plump and juicy while the large portion of sauerkraut was crispy with scattered peppercorn and bits of chewy bacon mixed in. The other side consisted of thick, golden brown potato slices with nice pieces of lightly seared onion and chewy bacon. I cannot imagine this meal being any more authentic even if I were eating it in Munich.

Although I shouldn’t have, I couldn’t turn down dessert. I had to go with another German standard, apple strudel with vanilla ice cream (VND120,000). A dessert that dates back to 17th century Austria, the strudel had a thin, flaky, buttery crust with soft, stewed apple slices with hints of cinnamon. The plate had a caramel drizzle while the vanilla ice cream, which was served in a separate dish, was topped with a maraschino cherry and a sprig of mint. This rich dessert was a gratifying way to finish this ambrosial meal.