Have you ever dreamed of flying? If the answer is yes, you are not alone. For centuries humans have looked with longing to the sky and wondered what it might feel like to take flight. Leonardo Da Vinci was so obsessed with this notion that he invented a model for a hang glider in 1496, but it is believed that the first man carrying kite was invented in China as far back as the 7th century. Ask any kid what super power they wish they had, the ability to fly will always be the most popular answer.

Kitesurfing, a sport that made its major mainstream debut in 1999 might be the latest answer to our endless quest for flight and ultimately the feeling of freedom and exhilaration that comes from gliding through the air. With a board strapped to their feet and a kite in their hands, riders carve the waves, being plucked up by the power of the wind and dropped back down into the surf zone for a thrilling ride and for more advanced riders, the opportunity to pull off tricks and get big air. It’s a great sport for adrenaline junkies because you are playing with not just one, but two uncontrollable and ever changing elements—the wind and the waves—amplifying both the highs and the challenges associated with the sport. “The feeling of harnessing the wind with the kite in your hands is a feeling of tremendous power, one that requires respect,” says Canadian kitesurfer Kieran Lawler who’s been hooked on the sport for the last seven years. “ It may look easy watching from the beach, but the kite requires caution and a steady hand.” That being said, most kitesurfing junkies readily admit that very few things in life come close to the sheer freedom experienced when harnessing the power of the wind, skimming across the glittering water and being lifted up into the air. 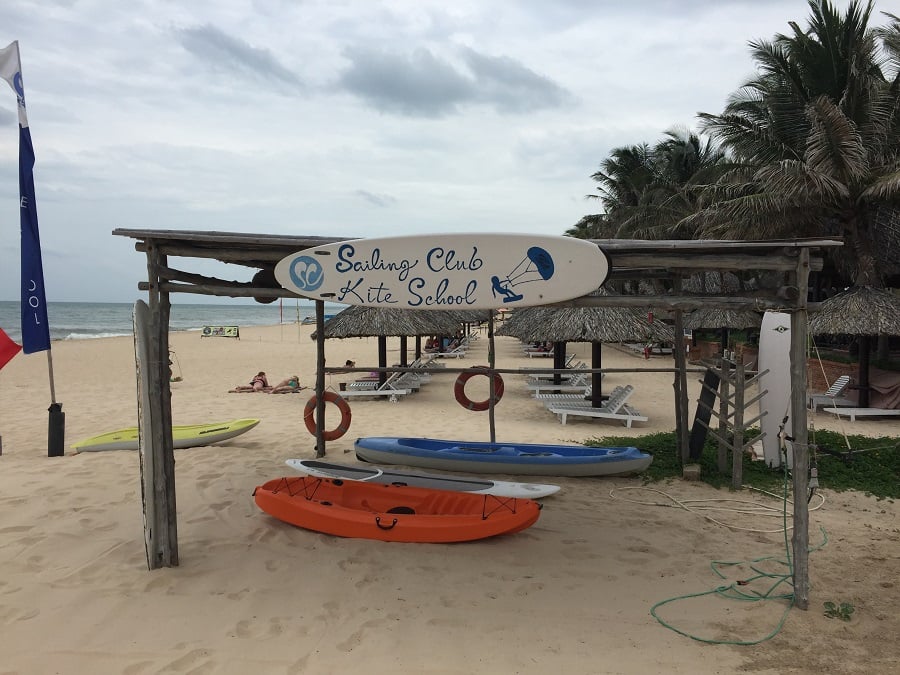 Lawler represents a new brand of tourist for Vietnam, the high-octane adventure seeking sport traveler. Amongst millennials in particular, there is a growing number of people who want to combine their favorite physical activity and their travels into one ultimate experience. For real kitesurfing enthusiasts, it’s more than just a sport, it’s a lifestyle and they are willing to travel far from home to live it for a few weeks up to a few months a year. They are constantly seeking to challenge themselves with bigger waves, wind and air and, of course, to bask in the afterglow of an epic session on the water in some new far-flung destination.

While the laid back palm fringed beach town of Muine has been on the radar of die-hard kitesurfers from abroad and weekend warriors from Saigon for the better part of 20 years now, Vietnam is still not top of mind for many kitesurfers when asked if they would consider it for a holiday. “Does it have good wind? Variable conditions from waves to chop to flat buttery water? A good vibe and chill scene on the beach after I finish my session in the water?” asks Lawler. “Then yeah, I would definitely consider it for my next kitesurfing getaway.”

If that’s all it takes, Vietnam can more than deliver to the foreign tourist and at an affordable price tag too compared to its major kiteboarding counterparts such as Spain, Portugal, Zanzibar, Hawaii and the Dominican Republic.

Muine regularly has kiteable winds all year round and boasts 20 to 25 days of good wind a month, making it one of the best places to go kitesurfing in Southeast Asia. It is packed with kitesurfing schools and you often see upwards of 150 kites in the water.

While that may seem a little crowded, according to Binh Nguyen a kitesurfing instructor and owner of the popular Binh Yen Homestay, there’s more than enough space for everyone. Binh feels there is so much more room for the region to grow in terms of tourism and that it has loads to offer the visiting adventure sport traveler, from cheap beers to big thrills out on the water. 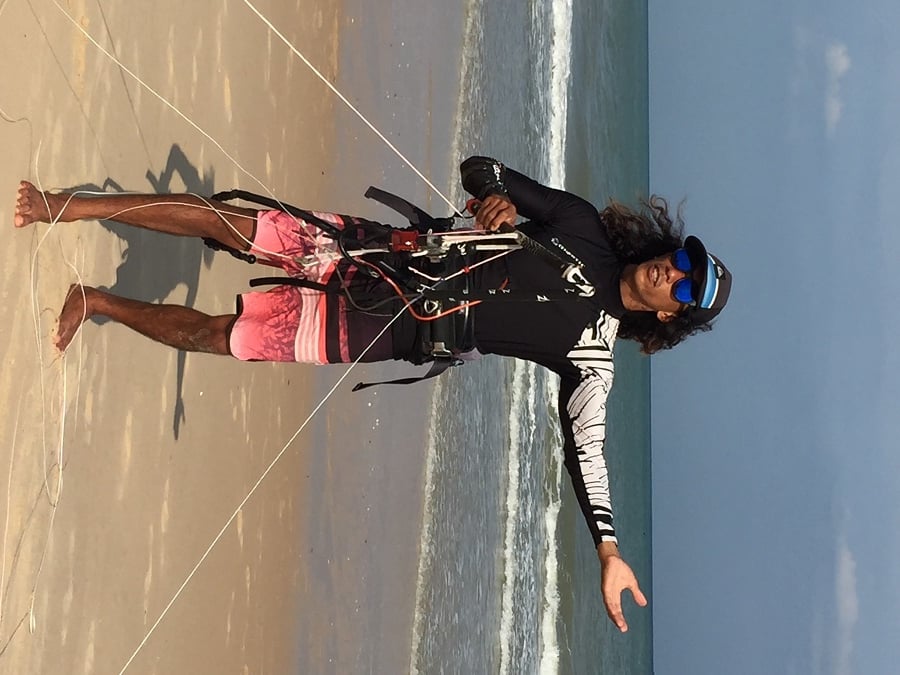 Binh is somewhat of a local celebrity as he was amongst a team of the first Vietnamese athletes to participate in snowboarding at the Asian Winter Games in Sapporo in 2017. Whether he is skateboarding, snowboarding or kiteboarding, Binh feels that life is better with a board strapped to his feet. Thanks to his many years as a martial arts student, he is known as a patient and gentle instructor who guarantees he will get you standing up. It’s a claim you would be hard pressed to doubt given the fact that he competed in Olympic snowboarding when he had never even set foot on snow before. If he says you can do it, then you can. “Why should Muine only be for experienced riders?” says Binh. “I’m here to teach everybody, from local kids to visiting tourists.”

With lovely beaches and warm weather, choppy waves and no coral reef to cause injuries and, most importantly, great wind conditions, a world class location like Muine is for everyone, from first time riders to lifelong enthusiasts for whom kitesurfing is tantamount to a religion.

Learning to kitesurf is no easy feat though so be prepared to invest some time and money at a good kite school with certified instructors. While the costs of kitesurfing  lessons is still very reasonable in Vietnam, a basic introductory course is three hours and this won’t get you up standing up. Lessons start with learning to steer the kite by flying it from the beach, safety instructions for self-rescue and body dragging through the water. Most instructors say that students can be standing up and doing the basics with only five to nine hours worth of instruction. Even better is the fact that kitesurfing is not reserved for just the super fit athletic types, anyone from the age of 10 onwards can learn as the level of difficulty depends on the water/wind conditions and how crazy you want to get when it comes to performing tricks. You can go for big air and rough waves or just a calm chill ride on flat water. It’s all up to you to decide how you want to grow into this sport. 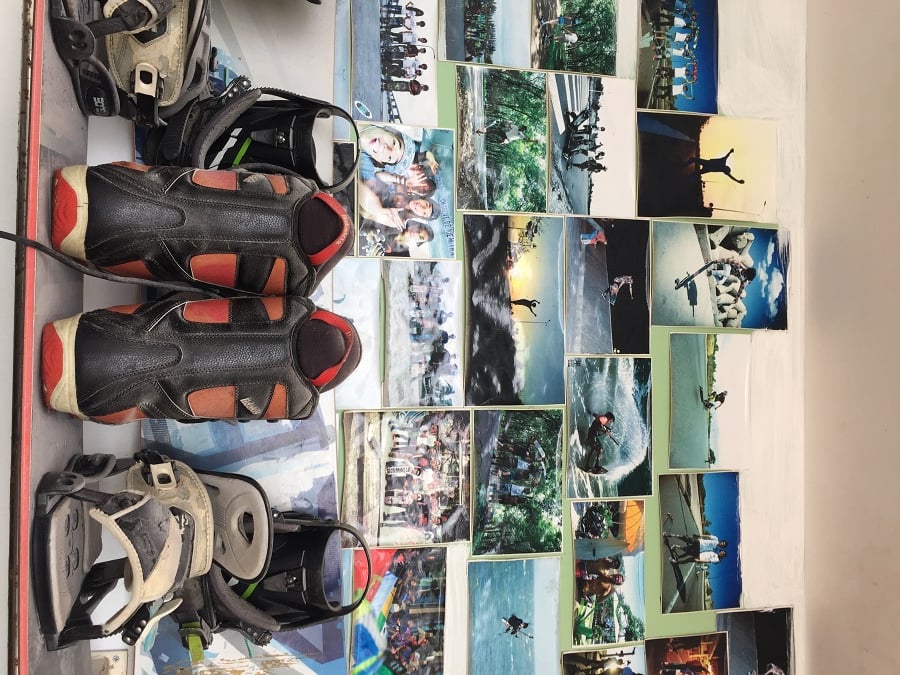 Over the last few years, the popularity of kitesurfing has rapidly picked up speed in other parts of Vietnam as well, such as the well developed coastal city of Danang, the glitzy resort town of Nha Trang and the latest chilled out kitesurfing destination, Phan Rang, just three hours north of Muine.

The polar opposite of the choppy waters of Muine, Phan Rang has perfect flat water in the My Hoa Lagoon in addition to clean breaks, a spacious sandy beach and crazy strong wind of 20+knots most days. A burgeoning kitesurfing community has sprung up there so if you want to get in on that action before it becomes too crowded, you best pack your bags soon.

When it comes to kitesurfing in Vietnam, just like the sport itself, the sky is (not) the limit! With its growing popularity and new great windy spots being ‘discovered’ or more like ‘disclosed’ by the local kitesurfing community to the lucky travelers that venture here, this isn’t just a figure of speech but rather a matter of fact.