A riddle: what has 12 legs, six on either side, and is made of metal? It’s not a metal spider, but that guess isn’t far off. A fitting comparison: “You know the movie Wild Wild West?”, its builder and metalworker Ly Minh Tien, asked. 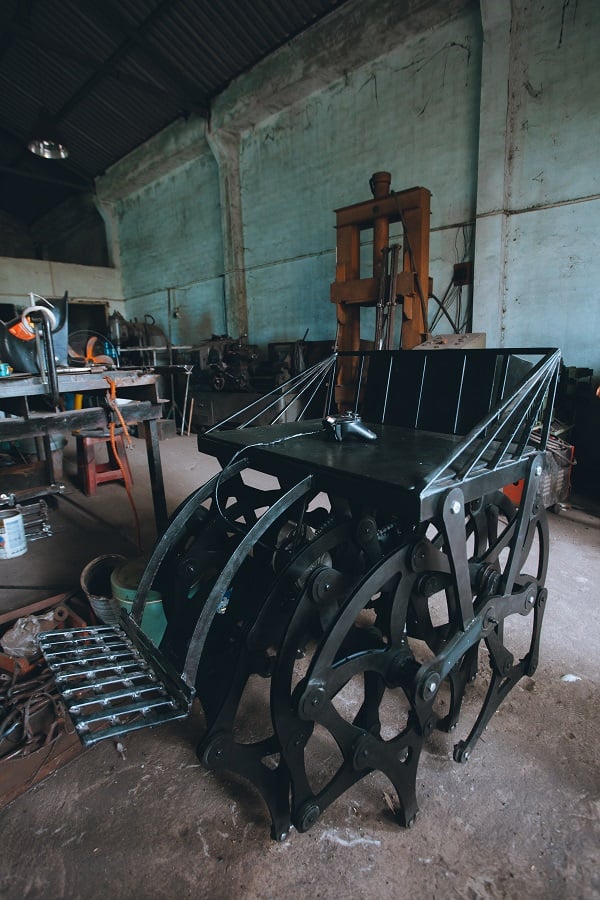 It’s called a Jansen walking machine. It’s named so for a Dutch engineerartist who’s known for crafting a series of kinetic sculptures. Think back to the viral YouTube footage of the Boston Dynamics robot dogs—part functional, part object of fascination. That’s a bit like Tien’s machine. It’s a hulking, black contraption bearing a seat at the top that would hold the user as it crawls forward.

There’s no seatbelt, but you won’t likely need one. The entire machine carries the user forward at no more than about five kilometers per hour. That’s top speed in a straight line, turning can be difficult, both because turning requires a subtle manipulation of the two joysticks that control legs sides individually and because ungentle and sudden movements can cause the machine to malfunction mechanically. 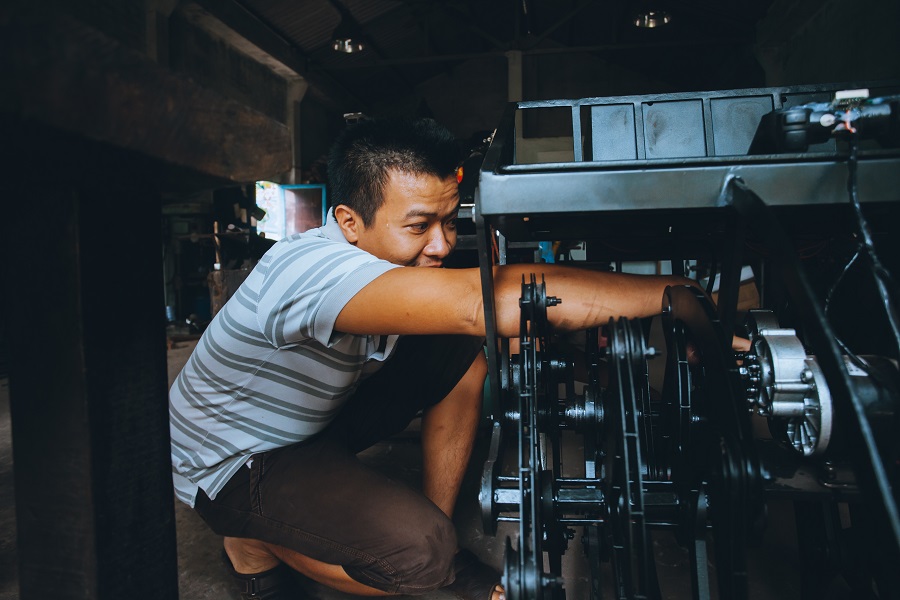 The big difference between the Boston Dynamics robots and Tien’s machine is that the robot dog on the internet appears fully functional and ready to walk out of the lab tomorrow. Tien’s walking machine is… well… “functionally limited” is a nice way of putting it.

“Impractical,” would be the less nice way of saying it. Nevertheless, it’s a cornerstone of Tien’s message to his country and the world: automotive transport isn’t the only way. Tien’s machine is a challenge to the transportation monopoly held by motorized means made with two wheels or four. In our modern moment of high profile environmental activism like that of young icon Greta Thunberg and the Climate Emergency, this ought to sound like a challenge that others have made too. But Tien’s raising the flag over a slightly different concern: air pollutants and namely dust stirred by wheeled transport. 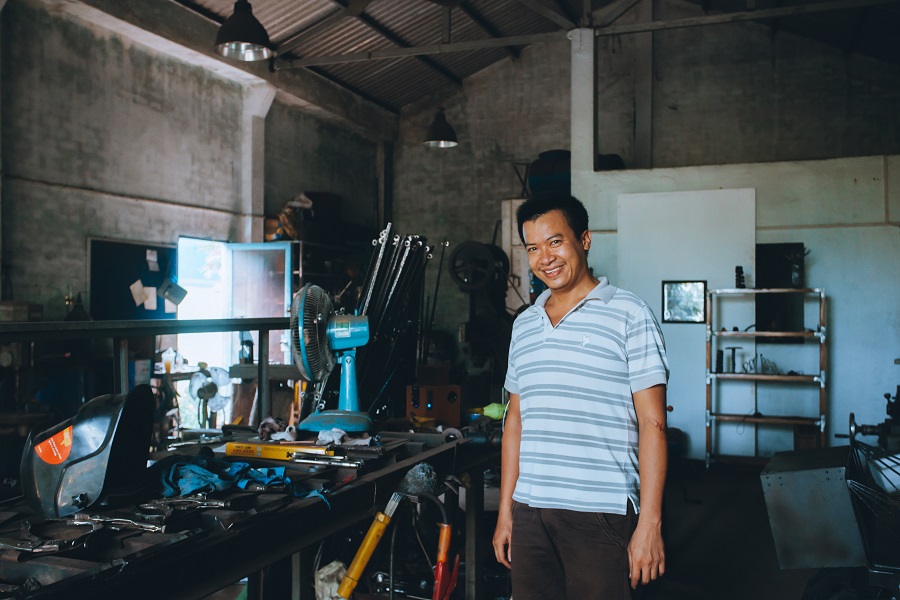 “My child gets sick all the time,” the engineer said. “When I was a kid like them, I never used to get sick.” Tien explained that his two young sons have been plagued with lung and respiratory problems leading to frequent coughing and illness. “I’m afraid the next generation will have it even worse,” he confided.

Tien is a Vietnamese metalworker who trained in the northern France city of Reims. It was there that he saw Jansen’s machine crab-walking through a video on YouTube. The experience left an impression on him. He started to explore other such devices on the web, but found that other builders who’d completed Jansen’s design around the world settled for a relatively small machine. 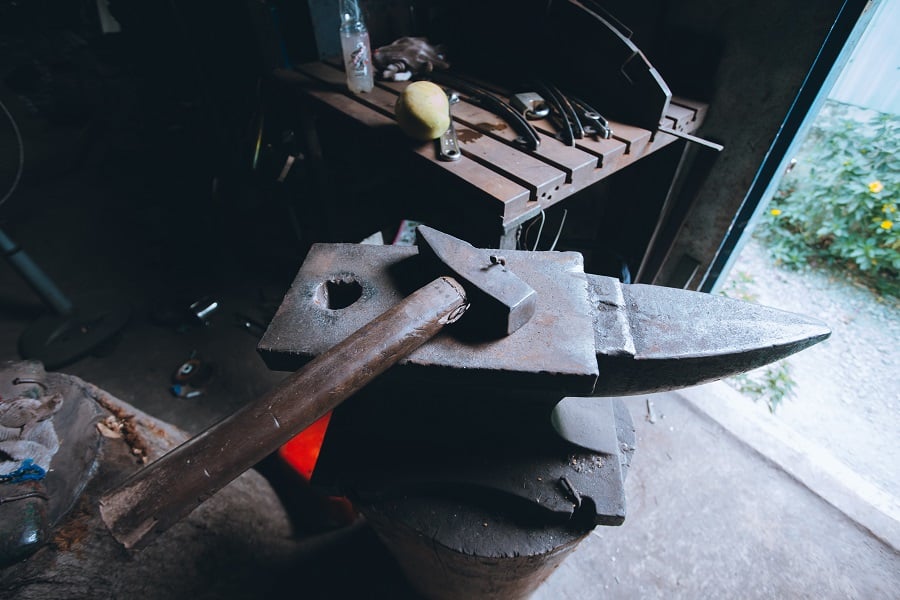 “I like it big this way,” Tien said gesturing toward his creation, which is about the length of a common motorbike. Seated atop the thing, a person of normal height would be slightly taller than the average population.

Tien started building the machine in August 2019. “I made a lot of mistakes,” he said laughing gesturing to a pile of discarded metal accruing in one corner of his workshop. 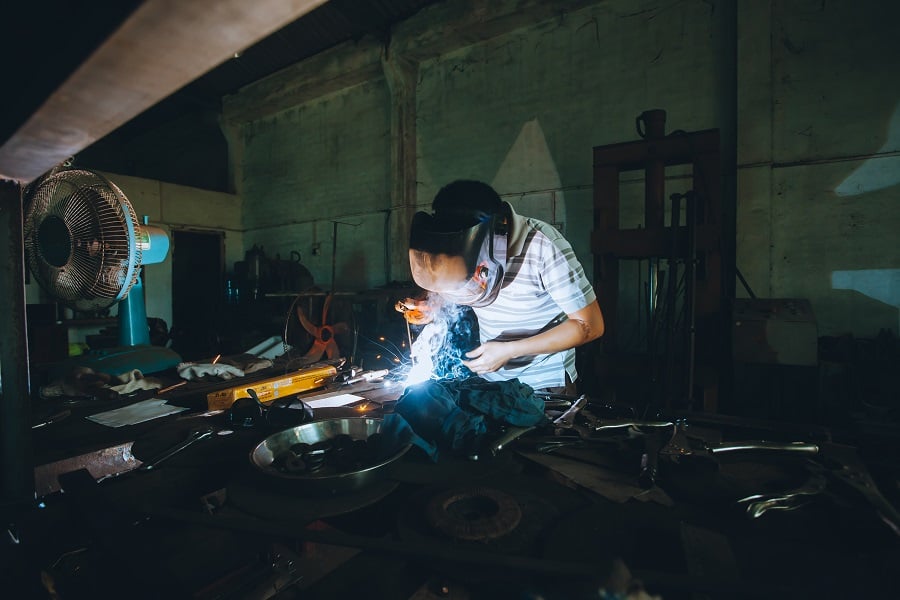 Building out the real thing has been a vindication to those who doubted him while he was building the machine. There were many, he recalled. “They said it would never work.”

But beyond convincing his critics, Tien is now focused on convincing Saigon authorities to let him display and operate the walking machine in a public place like the Nguyen Hue promenade. His goal is to use the machine to create a public awareness campaign of alternative transport. “I just want people to see something different,” Tien said.