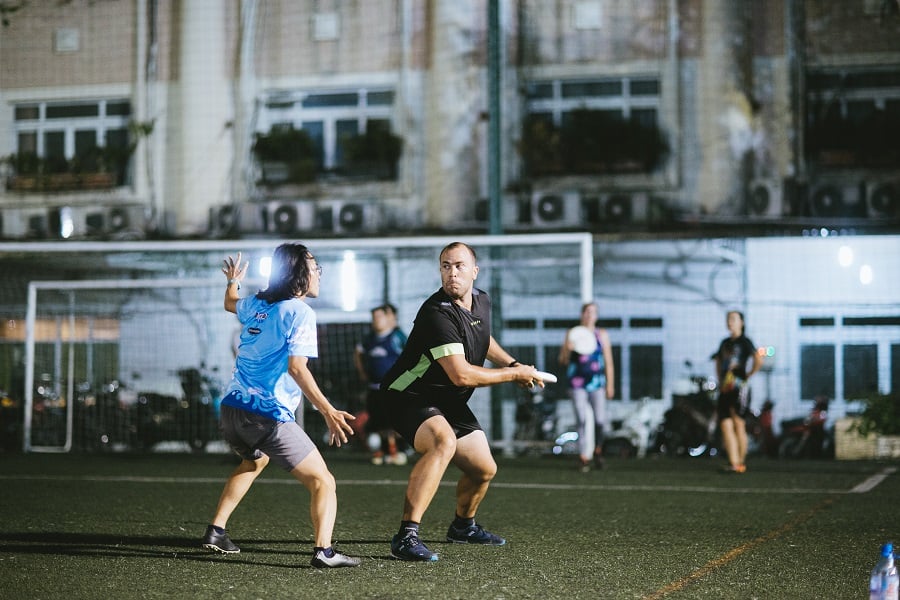 It is a frantic, fast-paced frisbee free-for-all and it is catching on in Saigon

Saigon Monsoon typically plays on the open soccer fields of RMIT, but school closures since the beginning of the year have pushed practices instead to the astroturf of Tao Dan Stadium in the heart of District 3, behind the Independence Palace. There, their Wednesday night practices may coincide with soccer games giving them a muchreduced space with a length that can be covered in less than 30 seconds of brisk running. During practice, they cut in half their allotted space giving two groups about the size of a large room to do ultimate frisbee in.

The average person handling a frisbee may request that the person catching it “go long” and give them room to sail it through the air. Ultimate frisbee, a soccer-esque sport that shares endzones and pressure on players in possession to keep it moving toward a goal line, would immediately see the liability in a long, arcing pass like that: a neatly set up interception. In their relatively confined spaces, Saigon Monsoon players prefer passes that are eye- or chest-level, travel for less than a second and zip neatly across the field. 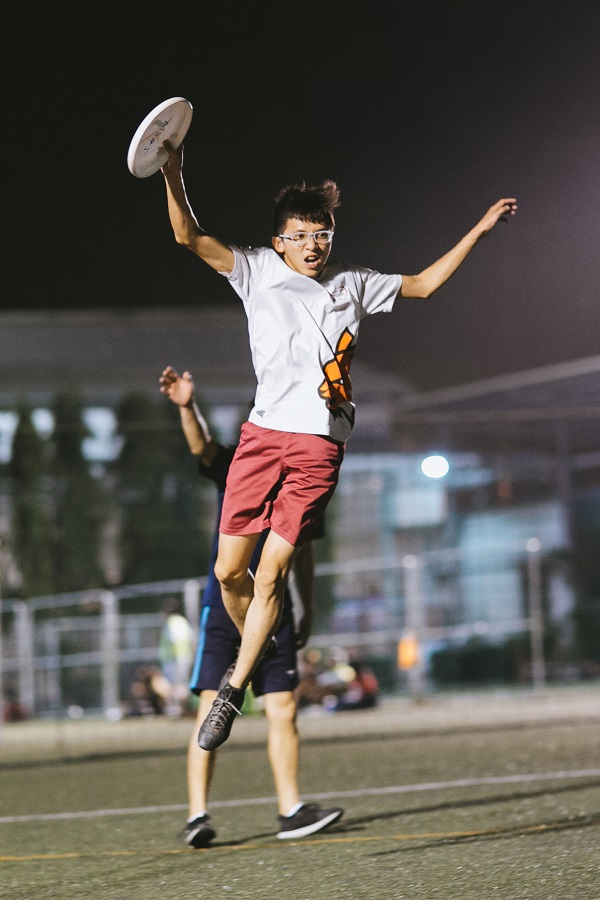 About half the team has participated in an international contest, perhaps the Malaysia Ultimate Open or the Mekong Cup, which explains their crisp, quick, studied movements on the field. Still, they could do better, coach and club president Matt Coster opines. Tonight, they’re running pass-centered drills. It’s not just passing, but completing a transfer for another teammate attempting to run interception, all that happening in a space a fraction of the size of what Saigon Monsoon is used to. Coster’s practice weaponizes the variables strategically, “Typically, we’ll want to focus on one thing and add chaos to it.” 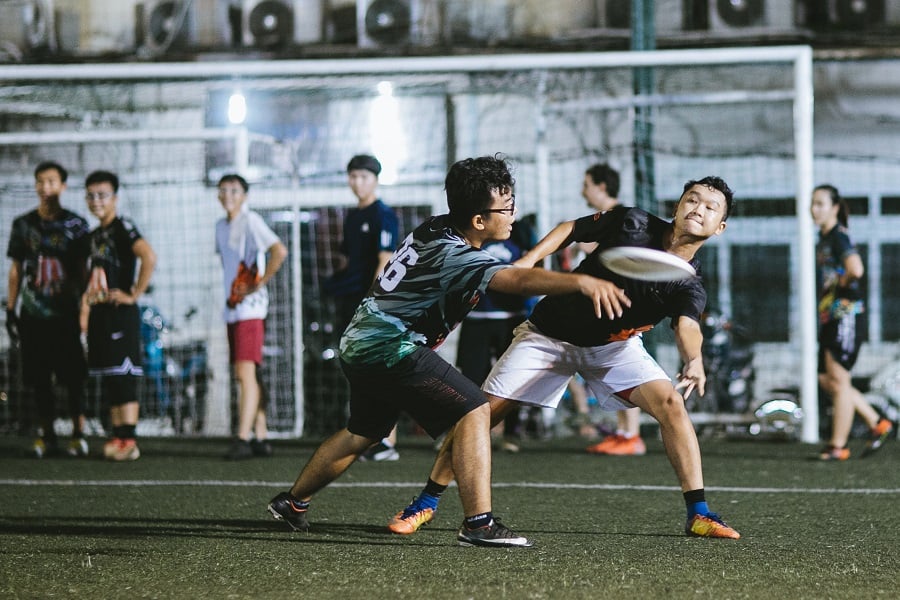 There are other groups in Saigon that do gather to play chiefly for pleasure. This is not one of them, as player Ella Bowler found out when she joined in October. Bowler, an English primary school teacher,  originally joined the team with a group of other friends who wanted something fun to do but found Saigon Monsoon’s rigor and drill-focused practices objectionable. “A lot of my friends ran scared, but I stayed,” Bowler said. “They didn’t realize it was competitive.”

Bowler, on the other hand, stayed because she liked the 90-minute practice sessions’ intensity level and the workout gave her wrists relief from her other sport, badminton. “These are skill-based practices,” Coster said plainly describing the seriousness of the sessions and the players themselves. 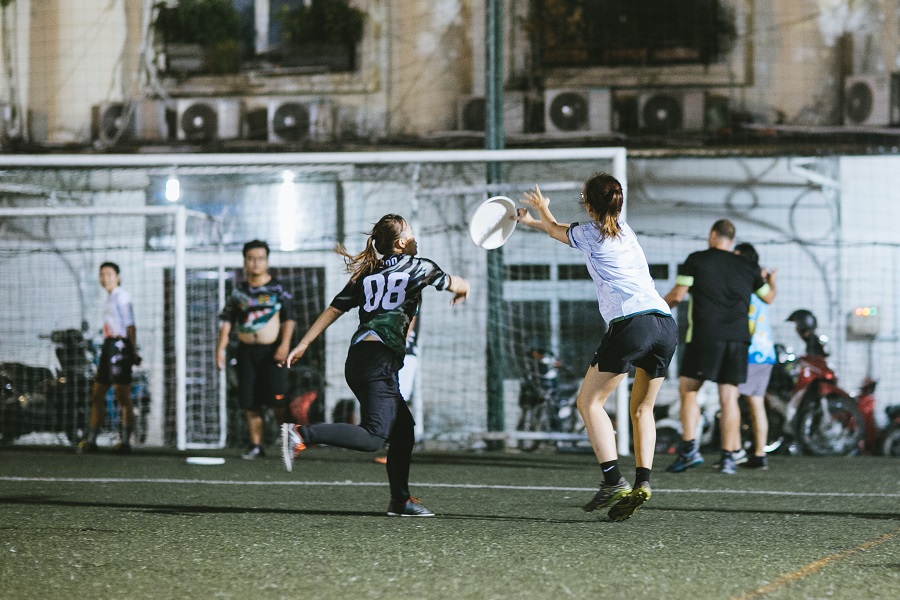 The sport itself rewards the committed. Except for the highest level international competitions, it is usually played without a referee, requiring players to self-police honestly. An interest in winning because of good game would have to prevail over an interest in winning a technical argument about what counts as in play. Coster said the referee-free play makes the game special.

So too does the co-ed play. It’s not unheard of to have male and female athletes playing on the same field as they would in a limited number of sports including tennis, some swimming events and horse racing. Where men and women meet, however, the events are always called “mixed” (i.e. “mixed-sex sailing”), a new twist on an old favorite. Ultimate Frisbee—or just “ultimate” as the athletes call it—is, by contrast, a place for all players by design. An egalitarian spirit prevails. 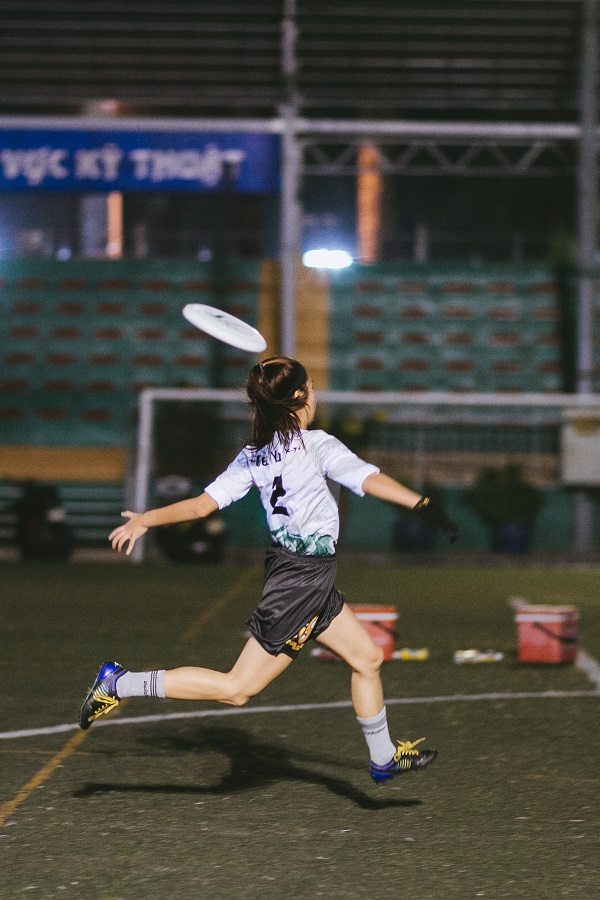 “I think it’s the spirit of the game,” Yen Nguyen said of her four years playing the sport. “Everyone was really friendly and welcome showing me how to play.” The comments contrast with Coster’s sometimes gruff English manner.

“This is the one, so don’t [email protected]#k it up,” the coach yelled at everyone but also no one in particular before running another scrimmage. The team will need to push if they want to make a strong showing at the two tournaments they wish to attend this year, one of them possibly the Malaysia Ultimate Open under perhaps more favorable weather. German Narvaez, a Colombian player, remembers the field was deluged in rain during their 2019 appearance where they placed 9th among the 16 teams making up the lower of two divisions.

It’s a fond memory for Narvaez who remembers diving for the Frisbee sliding on a soaked field. Even with eight years of play under his belt, the game still brings him obvious joy. His story is clipped short as he’s recalled to the field. In the closing minutes of the team’s practice, they’re practicing perhaps the most important piece of their practice: gameplay. Many of the players on the field are good enough on their own to qualify for tournaments on their own, but Coster isn’t letting up. “Okay, guys. Let’s be a little more disciplined,” the coach said, setting the bar for the already high-level players just a bit higher.