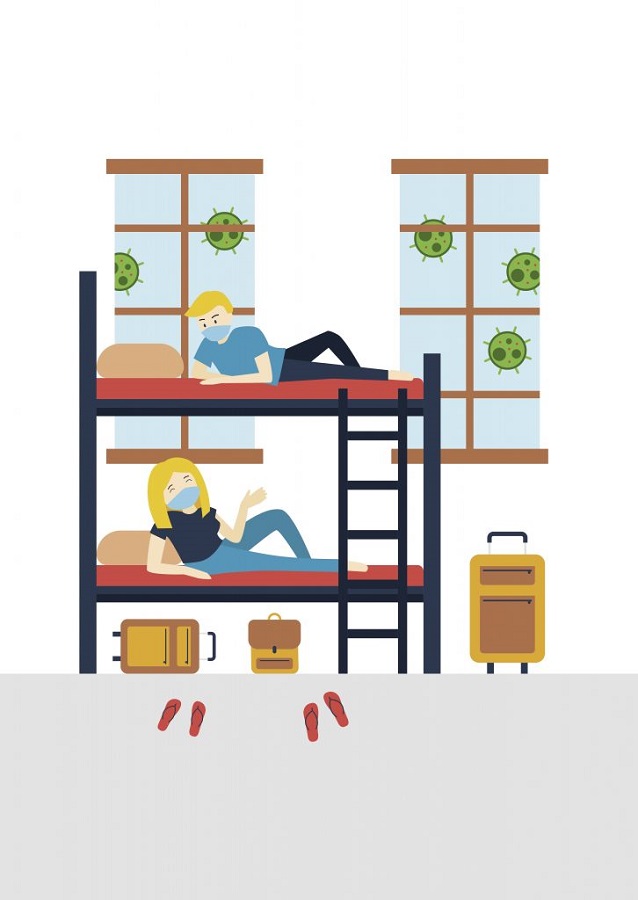 The day after Jake* went to Buddha Bar on March 14 with his girlfriend Amy*, he remembered he felt sick, a sore throat and mild fever. It was similar to his girlfriend’s day-long fever and aches. Nothing too serious for either.

Something more severe may have triggered alarm in him. Their visit happened as Vietnam had diagnosed its 40th COVID-19 patient, a number that had been increasing at about one-patient-per-day since the outbreak officially started on Jan. 23. This was before stronger measures like the halt of international arrivals, the closure of bars, clubs and other nightlife spots like the Buddha Bar and then the April 1st lockdown of the city.

Jake’s alarm went up when he learned that they were there the same night at “Patient 235,” the now-infamous British pilot whose presence created 17 new cases. In response to exhortations from public authorities for those attending to come forth for testing, Jake gave notice to local authorities. Someone was sent to take Jake and Amy’s temperatures.

At around 1 a.m. of March 21, a government official and security guards arrived at Jake’’s house to collect the two and a dog they were fostering. “It was blurry. They told us to pack a bag,” he said, provisions to be taken with them to a quarantine area in District 7.

The dog too was quarantined.

From there, the couple remembers the next 24 hour passed a state of near-hallucinogenic quality fear.

At 10 a.m. they were given their first test for COVID-19. At 10 p.m. of that day, they were being urged to remain calm but to quickly prepare to depart and to provide passport information. “We said ‘Listen, we want to know where we’re being taken,’” Amy remembered.

With the help of a translator, they learned that they had in fact tested positive for the virus.

Amy said the haste, the language barrier and just the general atmosphere of the situation put her on high alert.

“In the moment, you think the stupidest things,” she said remembering that the ferry they boarded on the way to their next quarantine camp in Can Gio, Ho Chi Minh City’s southernmost district, triggered fears that they were being ferried off to China.

Late that evening, the couple arrived in their second quarantine quarters: a bare room with white walls and a tile floor of a slightly different shade of white. A pair of beds made up the entire room’s furnishings.

That room and the corridor outside of it that led to a bathroom was the pair’s entire world during their 19-day stay in the Can Gio facilities. Aside from the few times they were called for testing, Amy and Jake said they didn’t receive a formal medical consultation explaining their diagnosis or what would happen to them while they were at the quarantine facilities, possibly due to their limited Vietnamese.

“No one’s saying anything and your mind goes to the worst,” Jake said. “They should be upfront the minute you know that I have it.”

Every few days, a facility staffer visited their room to read off just their name and the results of their test: positive or negative.

Outside of that, there’s waiting and more waiting to be done after that.

Jake said they’d expected to be quarantined following the Buddha Bar visit and had packed accordingly: games, books, a computer to watch TV shows and movies during quarantined date nights, and drawing supplies for Amy.

Jake and Amy said the quarantine experience strengthened them as a couple.

“It really made us grow a lot stronger. We were put in a really stressful situation. We had to be there for one another,” Amy said.

“I was really struggling with the whole environment, not having anything to do. I was in a very low kind of space. All I wanted was a cup of coffee and a Mars bar,” she said.

At one point, their company attempted to send them a care package—which was sent via a Grab driver who charitably drove the 45 minutes from the city to deliver it—but it was denied entry by the quarantine facility staff.

The couple had connected with a doctor at the facility who could speak English. They texted the doctor who personally went to meet the driver and their package. They learned that the doctor was a medical official with the Hospital for Tropical Diseases. The irony of having an important doctor help them receive what was by their description “just a bunch of saturated fats” was not lost on them.

“That felt like an ordinary day,” Amy said with warmth.

Just as the two would take turns caring for one another, their test results seemed to indicate they were taking turns as coronavirus carriers. A series of tests inside the quarantine facility produced a positive result for just one. Then the next test would show a positive result for the other.

Jake, a non-religious person with more than a passing interest in Buddhism, would start the day with meditation before the quarantine facility staff would come through their dorms with a leaf blower-like device that loudly sprayed disinfectant throughout the place. They played cards. They watched “Toy Story 4.”

They tested negative together. And then again.

On their third negative test, they were released from the camp.

Perhaps to detect a relapse, the couple was tested repeatedly after they left. They were tested a total of 15 times. That’s what they assume given news was emerging about possible relapses, but the reasons for the tests and the outlook on their diagnosis wasn’t communicated fully to them.

The coronavirus response “could be managed a little better, but we understand the pandemic is bigger than us,” Jake said.

On May 8th, the couple officially ended their testing regimen and received a certification showing they are coronavirus free, which has to be presented if they enter any high-density public spaces like buses.

“All things considered… I don’t think I would have wanted to be back home during this pandemic,” Jake said.

Their emailed notice of a positive coronavirus diagnosis to their consulate went unresponded, they said.

“We realize they were doing everything to protect us. At the same time, they fed us every day, they were there for us.”

Jake reported that the puppy they were fostering has been released from quarantine and is today happily living with a new family.