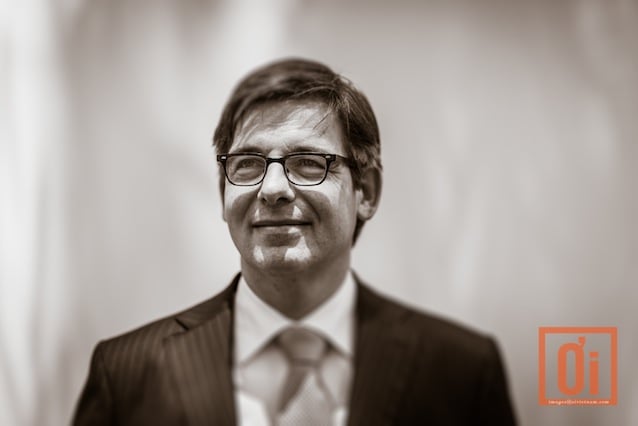 As part of our new series on consulates in HCMC, we speak with Consul General Simon van der Burg of the Netherlands about his country and its collaboration with Vietnam…

Simon van der Burg arrived in Vietnam this January to take up the post of Consul General of The Netherlands in Ho Chi Minh City. Although this is his first appointment as a Consul General, van der Burg has a long history working in embassies and consulates all over the world, having held positions in Belgium, Russia and Washington, D.C. His previous experiences also touched on the private sector, as he used to work for Fortis Bank as a liaison between the bank and the government, which has helped him to see both sides of the spectrum. He proudly affirms that he always learns something in every country in every job: how to compromise in Brussels and the can-do attitude in Washington.

Although still in his early days in the role, van der Burg is enjoying his new home. His first impression of Vietnam and the city in particular, is positive: a vibrant city full of hard working people and with many business opportunities.

Although the Consulate of the Netherlands is not actively promoting tourism, van der Burg encourages Vietnamese citizens to visit Holland. This year Amsterdam is particularly attractive with many events and different museums (including Van Gogh’s) reopening. What’s more the spring flower show at the Keukenhof, with over seven million bulbs, is likely to be a favorite for Vietnamese as they do love flowers.

He also recommends a visit to his hometown Rotterdam with points of interest including the dams and sea barriers that protect the city and its residents from the sea.

With around 1,000 Dutch citizens living in southern Vietnam, the Consulate, in collaboration with the Dutch Business Association in Vietnam (DBAV), organizes regular seminars and networking events as well as lunch discussions. The DBAV holds a monthly networking night event in venues like Liqhouse.

What recommendations do you have for Dutch citizens traveling or living in Vietnam?

Simon: Vietnam has a lot to offer, from mountains to sea to ancient cities, with many contrasts and amazing places to visit like Sapa, the Mekong Delta, Phu Quoc island, Hoi An, Da Nang or Hue. Try to visit as many as possible and enjoy their cultural richness.

What, if any, do you think are the biggest dangers in visiting or living in Vietnam?

S: I find Ho Chi Minh City very clean and safe. However as with many countries, the traffic! Motorcycles in particular, with so many people using the road, you need to be careful, especially in the city center. Like most other big cities you also need to be aware of bag snatchers.

Everyone knows Unilever, but what other Dutch companies are present in Vietnam?

S: There are currently around 100 Dutch companies here; most of them are small to medium sized. However, many Vietnamese may not be aware of how many Dutch products they use on a daily basis: starting the day by using many of the Unilever cosmetics, enjoying breakfast with Dutch Lady milk and using Shell lubricants in their motorbikes. Most house light bulbs are likely to be manufactured by Phillips and who does not enjoy a nice Heineken beer?

What are the three ‘must knows’ about Holland that you would like to share with our readers?

S: First, around two thirds of the Netherlands’ territory is on or below sea level, we earn our money below sea level and we know how to live with water – a fact that we have in common with HCMC and the Mekong Delta. Second, in Holland there are more bicycles than people, as it is the preferred means of transportation and very environmentally friendly. Third, in April our Queen will stand down and Prince William Alexander will become our new King.

Where can we find good Dutch food or restaurants in HCMC?

S: There is room for Dutch food in the HCMC’s restaurant scene. A potential business opportunity for Dutch and Vietnamese entrepreneurs to start a business in this field!

Do you hold any events throughout the year that promote your culture that the public can attend?

S: In 2013 we are celebrating the 40th anniversary of diplomatic relations between Vietnam and Holland. We are also planning to organize a Holland Village in a public venue in the centre of HCMC in November this year showing Dutch houses as well as contemporary knowledge and what Dutch companies have to offer.

Apart from Dutch traditions we want to share knowledge regarding water treatment, climate change and agro business. In 2010 almost a million people visited Holland Village in Ho Chi Minh City. For more than a week the 23/9 Park was a showcase of Dutch culture and entrepreneurship, offering images of windmills and tulips alongside demonstrations of contemporary techniques and products.

The government in HCMC has requested the Netherlands consulate organize Holland Village this year in the framework of 40 years of diplomatic relations between both countries, and we are determined to make it another big success.