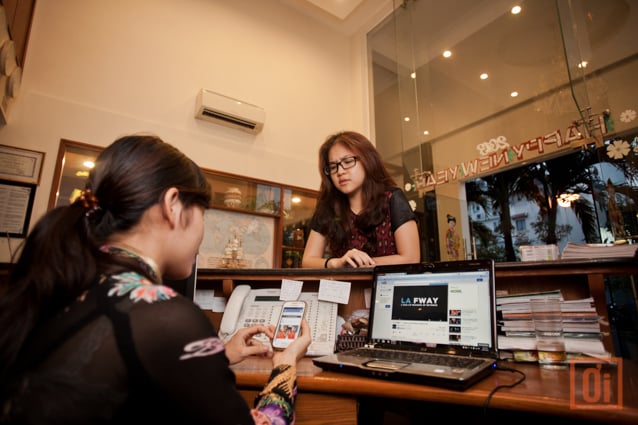 When it comes to customer service here, you’re on your own…

THE 21ST CENTURY has brought waves of tourists to Vietnam, attracted by the nation’s undeniable charm, delicious food, cheap souvenirs and natural beauty. According to the HCMC Department of Culture, Sports and Tourism, the city welcomed some 365,000 international tourists in November 2012, up 14 percent year on year, taking the total foreign tourist arrivals in 11 months to nearly 3.47 million, up 12 percent. But 95 percent of those same tourists won’t make a second trip back. one of the reasons? Bad service.

Bewildered visitors often turn to their close compatriots, the expats, for answers to this question: Is Vietnamese service really that bad, or was I just unlucky?

“Whether it is in retail, or restaurants, my experiences here have ranged from some of the worst in the world to some of the best,” says robert Stockdill, director of content of Insideretail.asia, drawing from ten years’ of experience as an insider in the international retailing business. “Shopping malls are still a relatively new concept in Vietnam and international brands have only been sprouting up in any number for the last five years or so. So you have a huge lack of training and experience which runs from management down to store staff.”

His experience as a long time expat in Asia and Vietnam is slightly different to that of usual tourists. He talks not of petty market tricks performed by roadside peddlers, but of long-ingrained vices within the system. In shops, for instance, he has lost count of the number of times he has asked for a product only to be given a closed response of, “Sorry, run out.”

“No one suggests I try another branch. No one asks if they’d like me to have it ordered in. No one offers to phone another store and see if they can locate the product,” he continues. “Sometimes people will make a call but only if I ask them to, as if to suggest they could never have thought of it themselves.”

To a Westerner, it seems like common sense to find a way to save a sale when a product has run out. But to untrained Vietnamese, they all too often fail to think beyond wanting to answer a question as simply and quickly as possible.

Robert says he has had good retail experiences in stores as well, but is puzzled by such basic mistakes.

The lack of a commission-based incentive coupled with the language barrier becomes a deterrent to better serving a client, explains Nguyen Quang, who works as a salesperson at a clothing boutique.

Pham Minh Trang has been behind the customer service desk of a car showroom in downtown Saigon for the last fifteen years and has her own question to ask. “Ever thought about why it goes on for so long? In the West, companies with this kind of [bad] service don’t live past their second birthday. But it goes on here, for years. There are a lot of reasons for this, but I think the crux of the problem is the Vietnamese consumer’s behavior.”

She says Vietnamese consumers don’t complain nearly as much as they should. No complaining means that owners or managers are not aware of the problems, therefore no solution or training is brought forth and that keeps the service standard remaining low.

“We grumble, but we don’t do anything. A Western consumer might raise social media hell. The Vietnamese consumers just shrug it off as another daily hardship to endure, then go right back to the store if it has good prices. It goes back to Bao Cap time.”

Bao Cap is the Vietnamese name for the subsidy market era Vietnam was in before its transformation into a consumer market. During Bao Cap, food and necessities were paid for with stamps. The dynamic was not that of seller and customer, but of giver and taker. Naturally, service quality was never part of the equation.

“Gradually, we train ourselves not to complain and to accept what was given. When the model changed to the consumer market, we took this mentality with us. We don’t complain as consumers,” Trang further explains. “We don’t expect complaints as goods and service providers. Consequently, we see no cause to change for the better. We accept badservice as normal service.”

Forty-six percent of the country’s population is aged over 30, meaning that half of Vietnamese people can recall the daywhen they had to wait in lines to pay for a bag of rice and some vegetables with their monthly stamps.

Trang cites other factors, too. Vietnadidn’t have consumer protection regulationsuntil 1999, and this regulation was nedeemed suitable for implementation until the 2010 addendum.

She remains optimistic about the futurof service levels here though. “Vietnam is a young country. The young bring changes. Already there are voices urging for improvements and plans for long-terdevelopment. It will be the companies with good service that succeed in the end.”