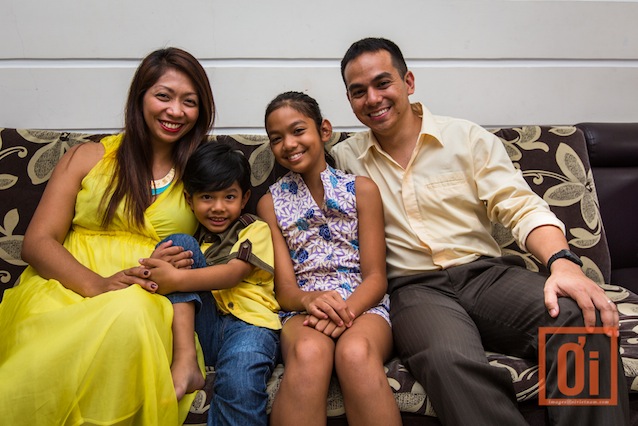 Expat parents discuss raising their children up bilingual in Vietnam…

For those of us struggling with the difficult tones, marks, and diphthongs of the Vietnamese language, there’s a certain sense of envy at watching a foreign seven-year-old making the effortless leaps of the tongue as if it were no trouble at all. Language seems to settle easy on kids and it passes between them like viruses – and children’s mastery of a second language tends to be so remarkable that there’s little to distinguish them from truly native speakers.

For a parent, however, there are some tough decisions that need to be made. While it’s all very well to encourage your child to mix with the locals and absorb their culture, it sometimes backfires – some parents have experienced a certain alienation from their children after introducing the cultural divide, and if you’re an expat, it can be hard work making sure your bilingual kids are as fluent in your own language as they are in the local dialect. Is there really something to gain in raising a preschool polyglot, or are you just asking for the onset of an adolescent identity crisis?

For expat mother Jennifer Foster, whose son Tai is part Vietnamese, the choice couldn’t be clearer. “He’s different from other foreign kids who don’t have a connection here. He does have roots.”

“Many parents don’t make a big effort to help their kids learn Vietnamese if they’re not here long-term. I realize Vietnamese may not be very useful outside of Vietnam, but since Tai was born here and has Vietnamese family, it’s possible he may want to spend time here as an adult. In that case, I think speaking Vietnamese would be advantageous,” says Jennifer. Tai takes weekly lessons in Vietnamese, although the amount of time spent on the subject at his international school is minimal. “It’s just an hour a week – a language and culture class. They tell you ahead of time that it’s not meant for fluency.”

The results, however, have been positive. “Tai loves to learn Vietnamese, and fancies himself a natural. We use Vietnamese when we’re out and about around town, and he loves to help me with vocabulary at the market and elsewhere. He also gives great directions to taxi drivers! Vietnamese people have treated him so wonderfully since the day he was born, so if he speaks Vietnamese, they are that much more pleased. He gets a great response, and I’m sure that’s encouraging.”

“He would be very happy to be fluent, as would I,” she adds.

Vietnamese, of course, is hardly a widelyspoken language outside of this country, and for some expats it’s not necessary at all to speak it even if they’re based here permanently. The sheer size of Ho Chi Minh City’s Korean community, for example, makes it far less imperative for resident Koreans to acquire a working knowledge of Vietnamese than it is for other foreigners.

For locally-based businessman Kang Minjoo, becoming a father while being posted in Vietnam wasn’t part of the original plan – but after marrying his long-term partner Mijung, little Jiyoon, (now four-years-old) was unlikely to have any trouble accessing a normal Korean education here. Still, Kang sees growing up bilingual as being a definite strength.

“I believe it’s important to focus on your mother tongue first. Many Korean parents here want their children to learn English very early, from the age of about three. But I think learning English as a second language should come later.

“There are a lot of Korean kids here who can’t understand Korean deeply or communicate easily after studying in English. They can’t go back to Korea to get a job or go to school there. If they take an exam, they can’t even understand the questions,” he continues.

There is, however, a difference between learning a second language and acquiring it naturally. With both parents working, Jiyoon’s extensive contact hours with her local nannies has seen her independently develop a sound understanding of Vietnamese. The acquisition wasn’t without its difficulties, however – Jiyoon’s first Vietnamese caregiver was strict and overly critical, and this, in combination with her naturally quiet and artistic nature, has made her reluctant to speak the language.

“Children have to be confident to speak out their opinions. Parents should always listen to what their kids have to say even if it’s not clear. Our first babysitter didn’t do that. I think she might want to talk more with the current babysitter. She’s about 19 or 20. Jiyoon calls her ‘sister,’” says Kang.

Kang Minjoo is entirely positive about encouraging his daughter to learn Vietnamese, despite its limitations in terms of usefulness outside of Vietnam. “She was born here and lives here, so it’s a good chance for her to acquire Vietnamese. It could be a good background for her in the future or a strong point in her career. If she learns Vietnamese fluently, I think she’ll have the ability to learn other languages more easily. I still believe that she can speak Vietnamese. I see her writing Vietnamese words sometimes at home. One day, if she needs it, I’ll arrange for formal lessons. But the mother language comes first.”

Adding: “If she has Vietnamese and Korean as two mother languages, that’s all right for me.”

Parenting bilingual children can be challenging, and with the expat lifestyle, things rarely go according to plan. Coming from a complex multilingual society already, Filipino parents Melvin and Nix Juban had very clear ideas about their firstborn daughter Ashley’s exposure to language.

“It was a conscious decision,” says Nix.

“When we moved to Malaysia, Ashley was only one, and we were worried about her picking up Malay English. In the Philippines, speaking English is associated with having a good social status. You have to be fluent to get ahead. There are many local dialects too, and it can be embarrassing when they mix.

“Even before leaving we were already convinced that we would use English as a primary language for our daughter, but that if we had to speak in Tagalog it should be fluent and not mixed up. We told our nannies, whatever you speak, it should be pure. Don’t confuse the child.”

This strategy went out the window fairly quickly when the family shifted to Israel and discovered that Ashley would need to study Hebrew. Young Ashley, already a seasoned world traveler at four, took it in her stride.

“She let go of my hand and didn’t look back. She’s very comfortable with change. We always break her in, talk to her like an adult. She was really fluent after three months,” recalls Nix. “She became my translator. I was learning, but struggling with it. I could read, and so when we went shopping, I would read out the labels, and Ashley would tell me what the words meant.”

Hebrew is a strongly expressive language, and when the family returned to the Philippines, they noticed big changes in Ashley’s behaviour. Both mother and daughter had become more assertive, and they were both accused of being “less Filipino”.

“It’s not just the culture you bring back,” says Nix. “There’s culture in the language. It’s the same with the whole ‘anh’ and ‘chi’ thing in Vietnamese – to get on well in my work here, I have to position myself in terms of social status, which bothers me.”

Melvin and Nix now have a five-year-old son, Adam, and when they arrived in Vietnam, they considered enrolling him in a local school for a purely Vietnamese education.

“My Filipino colleagues were really surprised at our openness to letting our son study in Vietnamese. But after Ashley’s experience, we realized it would only make him stronger. Unfortunately, the schools refused us, saying it would be too much effort to teach Adam and that their teachers couldn’t speak English. We eventually had to enrol him in an international school.”

Adam has had a good deal of exposure to Vietnamese, however, and is taking the weekly culture and language classes at school, which he enjoys immensely. Ashley, too, is making frighteningly good progress with her Vietnamese, and her parents have no hesitation about letting her explore the language and culture of their new home.

“We’re investing in relationships with the people here. It’s not just about hello and bye-bye. That’s just not how you interact with people,” says Nix.